NCERT Solutions for Class 9 Geography Chapter 4 Climate is designed by the subject matter experts at BYJU’S to assist students with their CBSE Term II exam preparation. Students have read about land forms and the drainage of our country in Chapter 2 and 3, respectively. These are two basic elements that students have learned. In this chapter, they will learn about the third element, that is, the atmospheric conditions.

The chapter deals with India’s climate condition, factors affecting India’s climate, Indian monsoon, onset of the monsoon and withdrawal, different seasons in India and distribution of rainfall. Students will find the questions related to these topics in the exercise section. We have provided the answers to the exercise questions in NCERT Solutions Class 9 Geography Chapter 4 Climate PDF. Students can download the PDF from the link provided below and can refer to it for their CBSE Term II exam preparation. 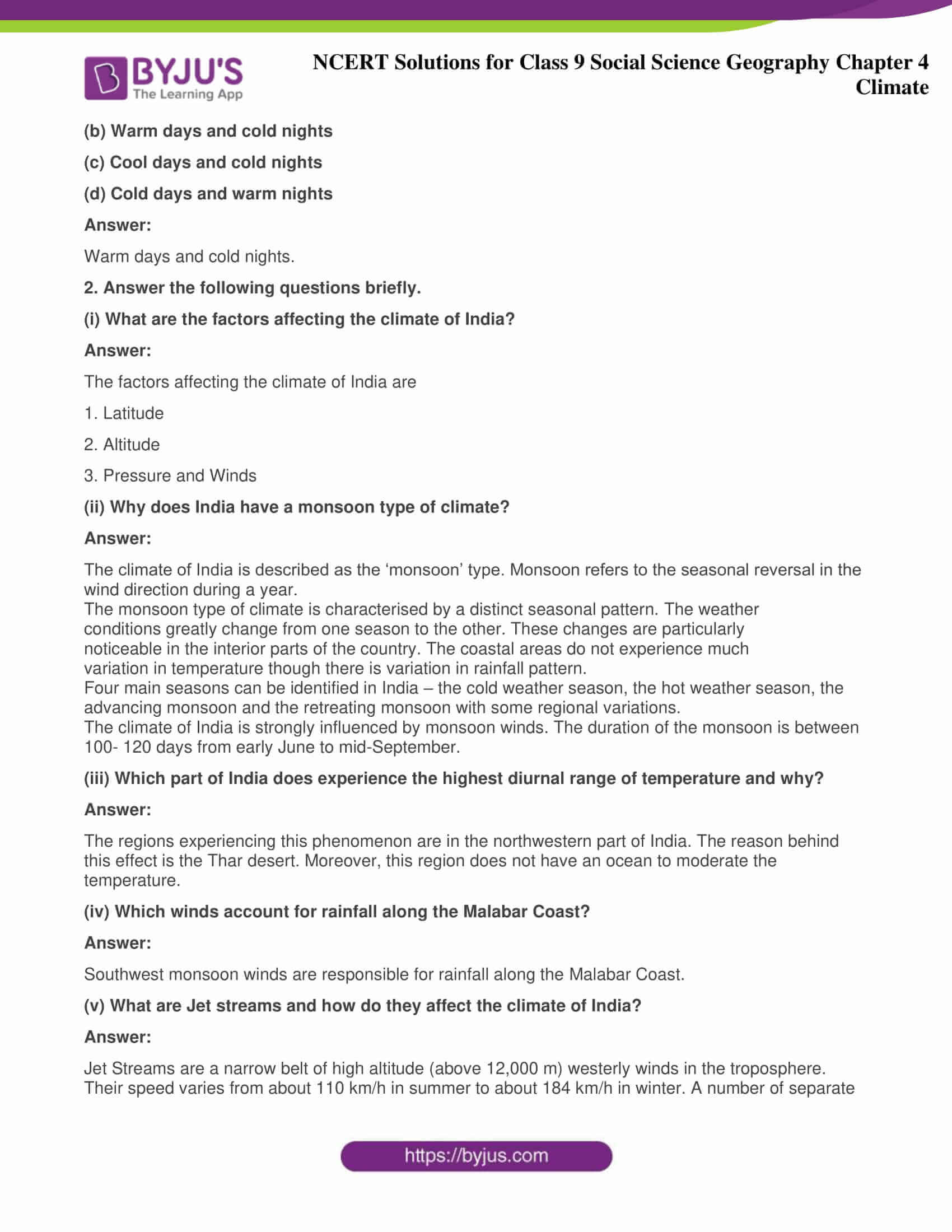 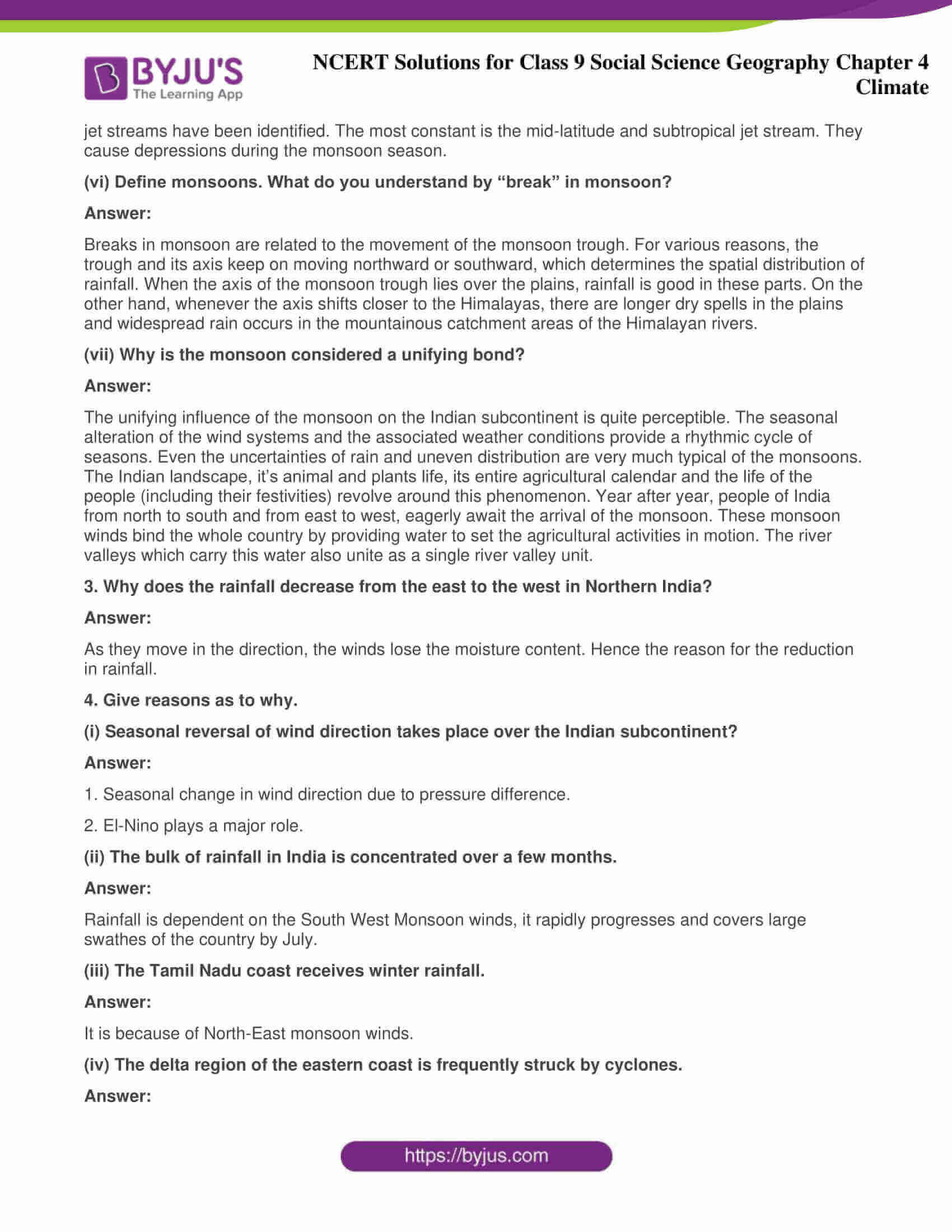 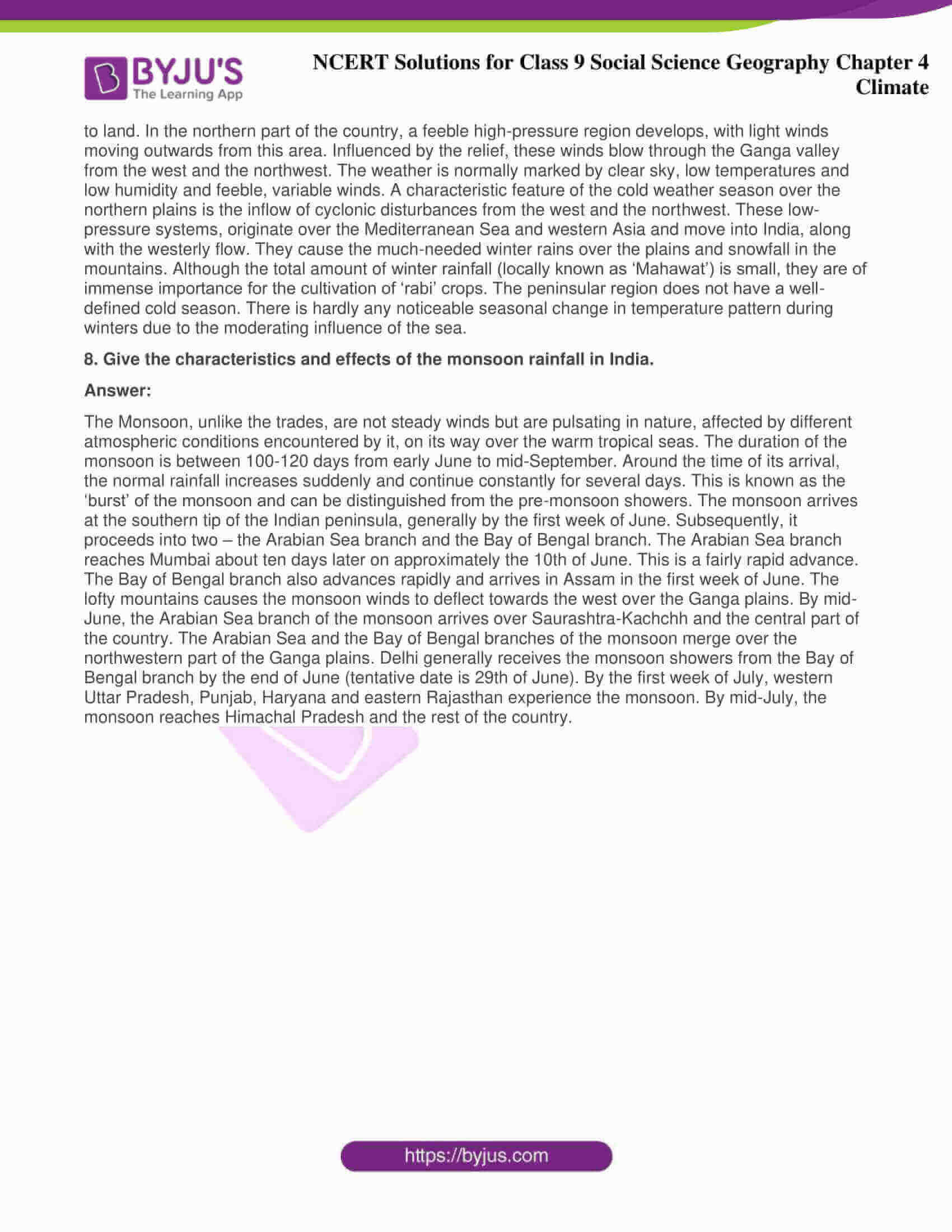 1. Choose the correct answer from the four alternatives given below.

(i) Which one of the following places receives the highest rainfall in the world?

(ii) The wind blowing in the northern plains in summers is known as:

(iii) Which one of the following causes rainfall during winters in the north-western part of India?

(v) Which one of the following characterises the cold-weather season in India?

(a) Warm days and warm nights

(b) Warm days and cold nights

(i) What are the factors affecting the climate of India?

The factors affecting the climate of India are

(ii) Why does India have a monsoon type of climate?

The climate of India is described as the ‘monsoon’ type. Monsoon refers to the seasonal reversal in the wind direction during a year.
The monsoon type of climate is characterised by a distinct seasonal pattern. The weather
conditions greatly change from one season to the other. These changes are particularly
noticeable in the interior parts of the country. The coastal areas do not experience much
variation in temperature though there is variation in rainfall pattern.
Four main seasons can be identified in India – the cold weather season, the hot weather season, the advancing monsoon and the retreating monsoon with some regional variations.
The climate of India is strongly influenced by monsoon winds. The duration of the monsoon is between 100- 120 days from early June to mid-September.

(iii) Which part of India does experience the highest diurnal range of temperature and why?

The regions experiencing this phenomenon are in the northwestern part of India. The reason behind this effect is the Thar desert. Moreover, this region does not have an ocean to moderate the temperature.

(iv) Which winds account for rainfall along the Malabar Coast?

Southwest monsoon winds are responsible for rainfall along the Malabar Coast.

(v) What are Jet streams and how do they affect the climate of India?

Jet Streams are a narrow belt of high altitude (above 12,000 m) westerly winds in the troposphere. Their speed varies from about 110 km/h in summer to about 184 km/h in winter. A number of separate jet streams have been identified. The most constant is the mid-latitude and subtropical jet stream. They cause depressions during the monsoon season.

(vi) Define monsoons. What do you understand by “break” in monsoon?

Breaks in monsoon are related to the movement of the monsoon trough. For various reasons, the trough and its axis keep on moving northward or southward, which determines the spatial distribution of rainfall. When the axis of the monsoon trough lies over the plains, rainfall is good in these parts. On the other hand, whenever the axis shifts closer to the Himalayas, there are longer dry spells in the plains and widespread rain occurs in the mountainous catchment areas of the Himalayan rivers.

(vii) Why is the monsoon considered a unifying bond?

The unifying influence of the monsoon on the Indian subcontinent is quite perceptible. The seasonal alteration of the wind systems and the associated weather conditions provide a rhythmic cycle of seasons. Even the uncertainties of rain and uneven distribution are very much typical of the monsoons. The Indian landscape, it’s animal and plants life, its entire agricultural calendar and the life of the people (including their festivities) revolve around this phenomenon. Year after year, people of India from north to south and from east to west, eagerly await the arrival of the monsoon. These monsoon winds bind the whole country by providing water to set the agricultural activities in motion. The river valleys which carry this water also unite as a single river valley unit.

3. Why does the rainfall decrease from the east to the west in Northern India?

As they move in the direction, the winds lose the moisture content. Hence the reason for the reduction in rainfall.

(i) Seasonal reversal of wind direction takes place over the Indian subcontinent?

1. Seasonal change in wind direction due to pressure difference.

(ii) The bulk of rainfall in India is concentrated over a few months.

Rainfall is dependent on the South West Monsoon winds, it rapidly progresses and covers large swathes of the country by July.

It is because of North-East monsoon winds.

(iv) The delta region of the eastern coast is frequently struck by cyclones.

(v) Parts of Rajasthan, Gujarat and the leeward side of the Western Ghats are drought-prone.

Because they fall in the rain shadow region of Aravali Mountains.

5. Describe the regional variations in the climatic conditions of India with the help of suitable examples

6. Discuss the mechanisms of the monsoon.

(a) The differential heating and cooling of land and water creates low pressure on the landmass of India while the seas around experience comparatively high pressure.

(b) The shift of the position of Inter Tropical Convergence Zone (ITCZ) in summer, over the Ganga plain (this is the equatorial trough normally positioned about 5°N of the equator. It is also known as the monsoon-trough during the monsoon season).

(d) The Tibetan plateau gets intensely heated during summer, which results in strong vertical air currents and the formation of low pressure over the plateau at about 9 km above sea level.

7. Give an account of weather conditions and characteristics of the cold season.

The cold weather season begins from mid-November in northern India and stays till February. December and January are the coldest months in the northern part of India. The temperature decreases as we go from the south to the north. The average temperature in Chennai, on the eastern coast, is between 24° – 25° Celsius. Whereas in the northern plains, it ranges between 10°C and 15° Celsius. Here, the days are warm, and the nights are cold. Frost is common in the north, and the higher slopes of the Himalayas experience snowfall. During this season, the northeast trade winds prevail over the country. They blow from land to sea, and hence, for the most part of the country, it is a dry season. Some amount of rainfall occurs on the Tamil Nadu coast from these winds as here they blow from sea to land. In the northern part of the country, a feeble high-pressure region develops, with light winds moving outwards from this area. Influenced by the relief, these winds blow through the Ganga valley from the west and the northwest. The weather is normally marked by clear sky, low temperatures and low humidity and feeble, variable winds. A characteristic feature of the cold weather season over the northern plains is the inflow of cyclonic disturbances from the west and the northwest. These low-pressure systems, originate over the Mediterranean Sea and western Asia and move into India, along with the westerly flow. They cause the much-needed winter rains over the plains and snowfall in the mountains. Although the total amount of winter rainfall (locally known as ‘Mahawat’) is small, they are of immense importance for the cultivation of ‘rabi’ crops. The peninsular region does not have a well-defined cold season. There is hardly any noticeable seasonal change in temperature pattern during winters due to the moderating influence of the sea.

8. Give the characteristics and effects of the monsoon rainfall in India.

The Monsoon, unlike the trades, are not steady winds but are pulsating in nature, affected by different atmospheric conditions encountered by it, on its way over the warm tropical seas. The duration of the monsoon is between 100-120 days from early June to mid-September. Around the time of its arrival, the normal rainfall increases suddenly and continue constantly for several days. This is known as the ‘burst’ of the monsoon and can be distinguished from the pre-monsoon showers. The monsoon arrives at the southern tip of the Indian peninsula, generally by the first week of June. Subsequently, it proceeds into two – the Arabian Sea branch and the Bay of Bengal branch. The Arabian Sea branch reaches Mumbai about ten days later on approximately the 10th of June. This is a fairly rapid advance. The Bay of Bengal branch also advances rapidly and arrives in Assam in the first week of June. The lofty mountains causes the monsoon winds to deflect towards the west over the Ganga plains. By mid-June, the Arabian Sea branch of the monsoon arrives over Saurashtra-Kachchh and the central part of the country. The Arabian Sea and the Bay of Bengal branches of the monsoon merge over the northwestern part of the Ganga plains. Delhi generally receives the monsoon showers from the Bay of Bengal branch by the end of June (tentative date is 29th of June). By the first week of July, western Uttar Pradesh, Punjab, Haryana and eastern Rajasthan experience the monsoon. By mid-July, the monsoon reaches Himachal Pradesh and the rest of the country.

Chapter 4 – Climate of NCERT Geography Class 9 talks about one of the most important factors of human survival, i.e., climate. The climatic conditions of an area decide the livelihood of people belonging to that particular area. Climate refers to the sum total of weather conditions and variations over a large area for a long period of time (more than thirty years). Weather refers to the state of the atmosphere over an area at any point in time.

The world is divided into a number of climatic regions, and climate plays a very important role in determining the lifestyle of people, the vegetation and the type of animals that can survive in specific climatic conditions. The entire existence of living beings revolves around the climatic conditions, and students will study the same in this chapter.

To get the chapter-wise answers of History, Geography, Political Science and Economics textbooks go through the NCERT Solutions for Class 9 Social Science page.

What are jet streams as explained in the Chapter 4 of NCERT Solutions for Class 9 Geography?

Jet Streams are a narrow belt of high altitude (above 12,000 m) westerly winds in the troposphere. Their speed varies from about 110 km/h in summer to about 184 km/h in winter. A number of separate jet streams have been identified and the most constant are the mid-latitude and subtropical jet stream. They cause depressions during the monsoon season. Other important concepts of this chapter can be learnt efficiently by referring to the NCERT Solutions created by subject experts at BYJU’S.

What are the main topics covered in Chapter 4 of NCERT Solutions for Class 9 Geography?

How can I use the NCERT Solutions for Class 9 Geography Chapter 4 PDF from BYJU’S effective for my CBSE Term II exam preparation?

Students can access the NCERT Solutions for Class 9 Geography Chapter 4 PDF from BYJU’S by simply clicking on the download links attached. Students can utilise these solutions to learn the correct answers for the questions present in their prescribed CBSE textbook. All the solutions created are very accurate and based on the latest CBSE syllabus and guidelines. Importantly, students can use the solutions PDF for revision purposes as it contains all the main topics being highlighted. Both chapter-wise and exercise-wise solutions are available to aid students to boost their CBSE Term II exam preparation.