The term ‘biodiversity’ was popularized by the sociobiologist Edward Wilson. Biodiversity is of three types:

The different patterns of biodiversity include:

Species diversity decreases towards the poles. There are a number of species in the tropics as compared to the temperate and polar regions. This is due to the following reasons:

The graph between species richness and area for a variety of taxa is a rectangular hyperbola. The diagram depicts the same. 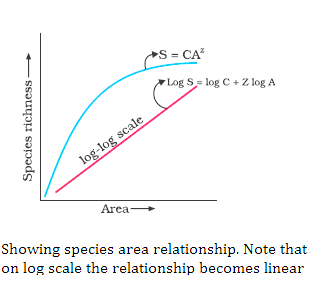 On a logarithmic scale, the relationship is a straight line described by the equation

Loss of biodiversity in a region can lead to

Following are the causes of loss of biodiversity:

Biodiversity conservation is the protection, upliftment and management of biodiversity to derive sustainable benefits for present and future generations.

Biodiversity can be conserved by the following two methods:

Biodiversity should be conserved for the following reasons:

To learn more about biodiversity and conservation, keep visiting BYJU’S.

What is ‘Global Warming’?

Global warming is the unusually rapid increase in Earth’s average surface temperature over the past century primarily due to the greenhouse gases released as people burn fossil fuels.

What is the meaning of ‘Extinction’?

Extinction refers to the dying out or extermination of a species.

Evolution is the change in the characteristics of a species over several generations and relies on the process of natural selection.