Practical geometry class 7 notes are provided here which can help the class 7 students to learn this chapter in a better and more effective way. These CBSE maths chapter 10 notes are concise and students can not only learn the topics but can also revise the concepts easily. The main topics from this chapter that are included here are-

Steps 1: Draw any line “l” and take a point “A” outside that line. Also, select a point “B” on that line and join point A and point B.

Step 2: From point B, draw and arc cutting line BA and BL. Mark the “D” and “C” respectively.

Step 3: From A, draw the arc of same radius from A.

Step 4: Take the distance CD using the compass and cut the arc FGE at both sides from G.

Step 5: Draw a straight line which touches both H and A.

In this, line “m” and line “n” are parallel since angle ABC and angle BAH are alternate interior angles.

SSS: in this, the length of three sides of the triangle are given. Step 3: Name this point as A and join the lines. 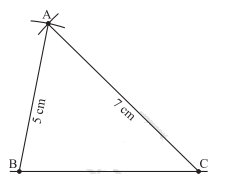 SAS: In this, the measurement of two sides and the angle between them is given. An example is given below for better understanding.

Step 2: From Q, draw QX such that it is making 60 degrees with QR. Then, measure 3 cm from Q on the line QX and mark that point as P. Then by joining P and R, the desired triangle is ready. ASA: In this, the degrees of two angles are given and the length of the side between them are given. 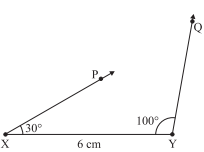 Step 3: Join the lines XP and YQ by converging and mark the point as Z. Triangle XYZ is then constructed using the parameters given. RHS: In this type, length of one leg and its hypotenuse are given. An example of the construction using this criterion is given below.

Example: Construct a triangle LMN which is right angles at M and the length of LN and MN are 5 cm and 3 cm respectively.

Step 1: Draw MN having the length of 3 cm and from M, draw a line MX which is perpendicular to MN.

Step 2: From M, draw an arc of 5 cm on MX and name it L. Now, from L, draw a line segment till N. Now, the triangle LMN is constructed using the given criteria.

To get more such maths and science notes for class 7, keep visiting BYJU’S. Also, get various class 7 sample papers, questions papers, and other study materials to prepare for the exams more efficiently.