The pace of development of a country depends upon the production of goods and services as well as their movement over space. Today, the world has been converted into a large village with the help of efficient and fast moving transport. Today, India is well-linked with the rest of the world. In CBSE Notes Class 10 Geography Chapter 7 – Lifelines of National Economy, you will see how modern means of transport and communication serve as lifelines of our nation and its modern economy.

India has one of the largest road networks in the world, aggregating to about 54.7 lakh km. The growing importance of road transport over rail transport is mentioned below:

In India, roads are classified in the following six classes according to their capacity.

The National highways are a network of trunk roads that are laid and maintained by the Central Public Works Department (CPWD). The historical Sher-Shah Suri Marg is called National Highway No.1, between Delhi and Amritsar.

Roads linking a state capital with different district headquarters are known as State Highways. These roads are constructed and maintained by the State Public Works Department (PWD).

Rural roads, which link rural areas and villages with towns, are classified under this category. These roads received special impetus under the Pradhan Mantri Grameen Sadak Yojana.

Border Roads Organisation constructs and maintains roads in the bordering areas of the country. This organisation was established in 1960 for the development of the roads of strategic importance in the northern and north-eastern border areas.

Roads can also be classified on the basis of the type of material used for their construction such as:

Railways are the principal mode of transportation for carrying huge loads and bulky goods for long and short distances in India. Railways have become more important in India’s economy. However, rail transport suffers from certain problems as well, which are mentioned below:

Pipeline network uses pipes, usually underground, to transport and distribute fluids. These are used to transport water, crude oil, petroleum products and natural gas, fertilizer factories and big thermal power plants. Solids can also be transported through a pipeline when converted into slurry.

There are 3 important networks of pipeline transportation in the country.

Waterways are the cheapest means of transport. They are most suitable for carrying heavy and bulky goods. It is a fuel-efficient and environment-friendly mode of transport.

The National Waterways in India are:

Inland waterways in India are Mandavi, Zuari and Cumberjua, Sunderbans, Barak and backwaters of Kerala through which transportation takes place.

India’s trade with foreign countries is carried from the ports. There are 2 major and 200 notified non-majors (minor/intermediate) ports in India.

Here is the list of major ports in India:

The airway is the fastest, most comfortable and prestigious mode of transport. Air travel has made access easier to the terrain areas like high mountains, dreary deserts, dense forests and long oceans. The air transport was nationalised in 1953. Air India provides domestic and international air services.

Pawanhans Helicopters Ltd. provides helicopter services to Oil and Natural Gas Corporation in its off-shore operations, to inaccessible areas and difficult terrains. But, air travel is not within the reach of the common people.

To Know About Smart Cities Of India, Watch The Below Video: 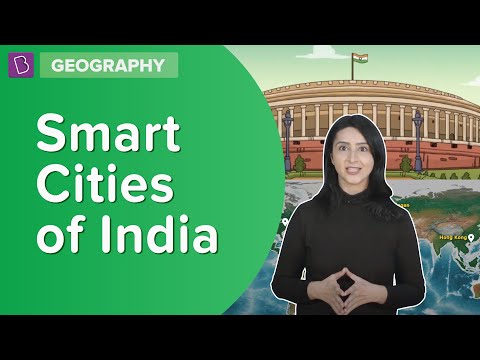 The major means of communication in India are television, radio, press, films, etc.

The Indian postal network is the largest in the world. It handles parcels as well as personal written communications.

India has one of the largest telecom networks in Asia. The Subscriber Trunk Dialling (STD) facilities all over India have been made possible by integrating the development in space technology with communication technology.

The exchange of goods among people, states and countries is referred to as trade. Trade between two countries is called international trade. It is considered as the economic barometer for a country. Export and import are the components of trade. The balance of trade of a country is the difference between its export and import.

The commodities exported from India to other countries include gems and jewellery, chemicals and related products, agriculture and allied products, etc.

The commodities imported to India include petroleum crude and products, gems and jewellery, chemicals and related products, base metals, electronic items, machinery, agriculture and allied products.

Tourism as a Trade

More than 15 million people are directly engaged in the tourism industry. Tourism in India:

We hope these CBSE Class 10 Social Science Notes helped you in your studies. Keep Learning and stay tuned for more updates on CBSE and NCERT. Download the BYJU’S App and subscribe to YouTube channel to access interactive Maths and Science videos.

What is the meaning of an ‘Economy’?

An economy is the large set of inter-related production and consumption activities that aid in determining how scarce resources are allocated.

When was the Indian postal service started?

Warren Hastings had taken initiative under East India Company to start the Postal Service in the country in 1766.

What is the meaning of ‘International trade’?

International trade is the exchange of capital, goods, and services across international borders or territories because there is a need or want of goods or services.