CBSE Class 12 board exams have already started three days ago i.e.on 2nd of March. Students are done with their English paper, but the real challenge for Science stream students have just started with Physics paper conducted on 5th March 2019. According to the students who appeared for the Physics paper said that this year Physics paper was an average and a scoring paper compared to last year Physics paper. All the questions were from the syllabus as per the CBSE pattern and nothing came out of syllabus.

In terms of the difficulty level section D was slightly tough and challenging and Section C questions were somewhat tricky. Most of the questions asked in the Physics paper were numerical based due to which some students found the paper lengthy. As per the analysis 2 to 4 questions were almost similar to previous year Physics question paper.

The Physics question paper was divided into four sections Section A, B, C and D. More details given below:

Section C contains the highest mark weightage which mainly consists of questions related to numerical problems, conceptual based and derivation based. The physics question paper was more conceptual than theoretical. 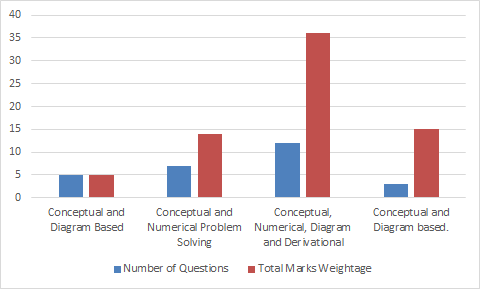 In conclusion, we can say that Class 12 Physics paper was average in terms of difficulty level. But in terms of time management, it might be an issue as the paper was a bit lengthy and tricky. Hope students of Class 12 have completed their paper on time so that they pass their Physics paper with flying colors.