NCERT Solutions for Class 11 Chapter 13 Chemistry Hydrocarbons is a premier study material that helps you score handsome marks in the class 11 examination. This solution has answers to the textbook question along with extra questions, important questions from previous year question papers. Studying NCERT Solutions will help you to understand the chapter in a better way. This solution also comprises of worksheets and exemplary questions that help you in understanding the topic thoroughly.

Organic chemistry is the scientific study of the structure, properties, composition, reactions, and synthesis of organic compounds. To understand the chapter hydrocarbons you have to study the chapter thoroughly and solve NCERT questions. The CBSE books are designed according to the latest syllabus provided by the Central Board of Secondary Education (2019-20). These books are written and prepared by the subject experts of NCERT.

NCERT Solutions for Class 11 Chemistry Chapter 13 Hydrocarbon is one of the important chapters of organic chemistry. Class 11 is an important phase of a student’s life because it shed light on important topics such as hydrocarbons. CBSE class 11 hydrocarbons teach about alkanes, preparation of alkanes from unsaturated hydrocarbons, from alkyl halides, from carboxylic acids, physical and chemical properties of alkanes.

Hydrocarbons topic gives knowledge about Alkenes, the nomenclature of alkenes, isomers, preparation of alkene using alkyne. The NCERT class 11 chemistry textbook is one of the best study material to study for chemistry. The questions provided at the end of the chapter are very much important from the examination point of view, sometimes the same questions are directly asked in the examination; so it is important that students should solve all the NCERT questions.

Question 13.1: How do you account for the formation of ethane during chlorination of methane ?

The result begins with the hemolytic cleavage of Cl – Cl bond as:

In this propagation step, chlorine-free radicals attack methane molecules and the C-H bond collapses to form methyl radicals as:

Ethane formation is the result of the termination of the chain reactions resulting from the ingestion of reactants as:

Through this process, ethane is thus obtained as a by-product of methane chlorination.

Write the IUPAC names of the following compounds :

2-Methylbut-2-ene is the required IUPAC name

Pen-1-ene-3-yne is the required IUPAC name

1, 3-Butadiene or Buta-1,3-diene is the required IUPAC name

5-(2-Methylpropyl)-decane is the required IUPAC name

For the following compounds, write structural formulas and IUPAC names for all possible isomers having the number of the double or triple bond as indicated :

(a) The resulting structural isomers with one double bond are probable for C4H8: 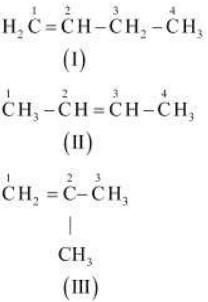 The IUPAC name of

(b) The subsequent structural isomers are probable for C5H8 with one triple bond: 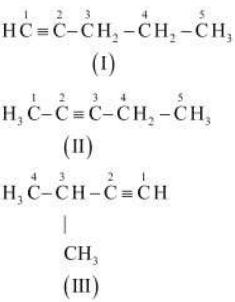 The IUPAC name of

Write IUPAC names of the products obtained by the ozonolysis of the following compounds :

(i) Ozonolysis of Pent-2-ene is shown as: 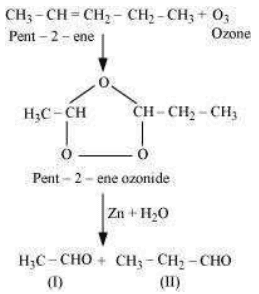 The following Product IUPAC names are:

Product (I) ethanal, and 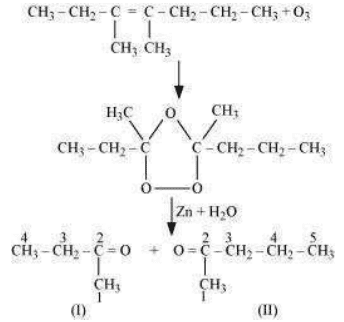 The product names subsequent to IUPAC are:

(iii) Ozonolysis of 2-Ethylbut-1-ene is shown as: 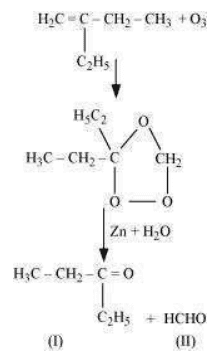 The subsequent IUPAC names of the products are:

(iv) Ozonolysis of 1 – Phenylbut-1-ene is shown as 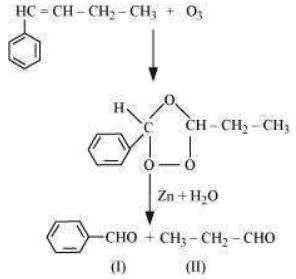 The subsequent IUPAC names of the products are :

Product (I) benzaldehyde, and

An alkene ‘A’ on ozonolysis gives a mixture of ethanal and pentan-3- one. Write structure and IUPAC name of ‘A’.

In the course of ozonolysis, an ozonide is produced as an intermediate that has a cyclic structure; it undergoes cleavage to provide the final products. Ethanal and pentan-3-one are obtained from the ozonide intermediates. So, the possible ozonide structure will be:

This ozonide is produced by adding ozone to ‘ A ‘ as a transitional product that forms final products undergoing cleavage. The preferred ‘ A ‘ arrangement may be obtained by removing ozone from the ozonide. Therefore ‘ A ”s structural formula is:

As an outcome, ‘A’ is 3-Ethylpent-2-ene is the IUPAC name of alkene.

From the information given it gives two moles of an aldehyde of molar mass 44 u when ‘ A ‘ undergoes ozonolysis. The formation of an aldehyde’s two moles suggests that the presence of similar structural units on both sides of the C-C ÿ bond is present. Consequently, the ‘ A ‘ structure can be represented as shown below:

Because there are eight C – H σ bonds, 8 hydrogen atoms are present in ‘ A. ‘ There are also three C – C bonds, so the ‘ A ‘ structure contains four carbon atoms.

The combination of all these inferences can represent the structure of ‘ A ‘ as shown below:

After Ozonolysis of ‘A’ takes place,

The end product is ethanol with molecular weight = 44 u 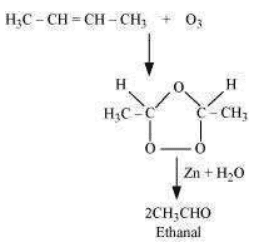 Propanal and pentan-3-one are the ozonolysis products of an alkene? What is the structural formula of the alkene?

From the given information, the two ozonolysis products of an alkene are pentan-3-one and propanal.

Suppose the alkene given is A. The reverse of the ozonolysis reaction is what we get, 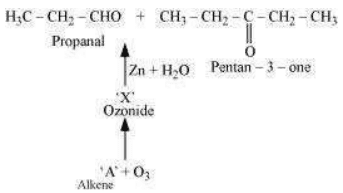 The products obtained by ozonide cleavage, let it be ‘ X. ‘ Since ‘ X ‘ contains both products in cyclic form, the possible ozonide structure may be represented as shown below:

Because ‘ X ‘ is an additional component of the ozone alkene ‘ A. ‘ Therefore, the potential structure of the given ‘ A ‘ alkene will be:

Write chemical equations for the combustion reaction of the following hydrocarbons:

Combustion reactions may be defined as an oxygen or oxygen reaction of a compound. 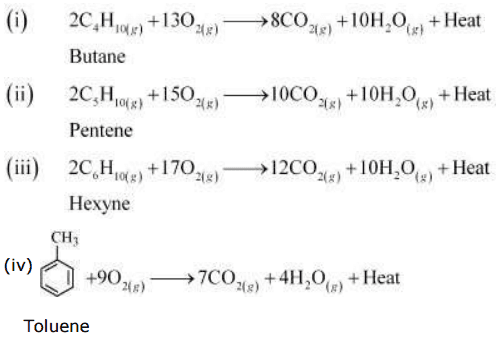 Draw the cis and trans structures of hex-2-ene. Which isomer will have higher b.p. and why?

Hex-2-ene is represented as shown below:

Geometrical isomers of hex-2-ene are as follows:

On the other hand, a trans-compound dipole moment is the result of the dipole moments of C – CH3 bonds and C – CH2CH3 bonds both acting in opposite directions

As cis-isomer is polar than trans-isomer. Thus, the higher the polarity, the greater the intermolecular dipole-dipole interaction and the need for more heat to break the bonds. The boiling will be higher, therefore.

Therefore, cis-isomer of a compound will have a higher boiling point than trans-isomer of that compound.

Why is benzene extra ordinarily stable though it contains three double bonds?

Benzene is a hybrid of the resonating structures and it is shown as: 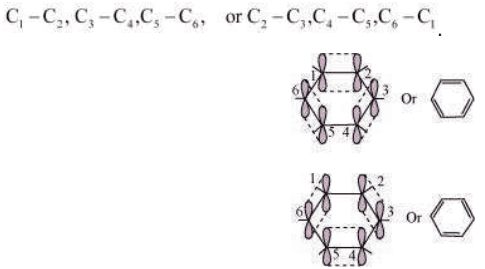 These six π-bonds are delocalized and can move about the six-carbon nuclei freely. Therefore, due to the delocalization of these π-bonds, benzene is stabilized even after the presence of three C-C π -bonds.

What are the necessary conditions for any system to be aromatic?

The essential conditions for any aromatic system are as follows:

(i) Firstly, the compound arrangement or structure should be planar.

Question 13.12: Explain why the following systems are not aromatic? 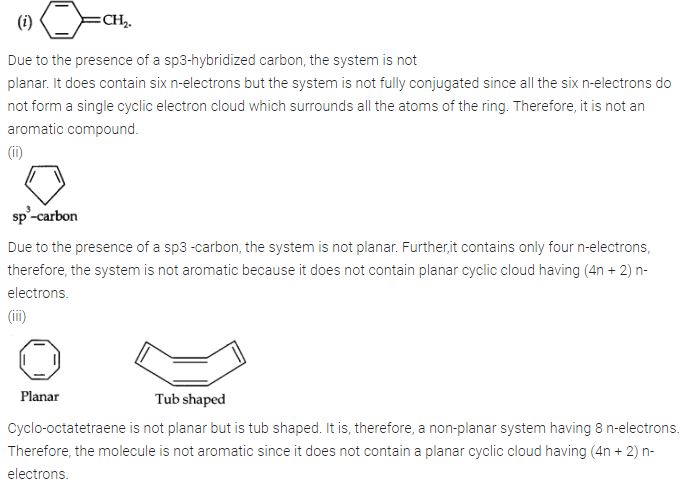 How will you convert benzene into:

(i) Benzene converted to p – nitrobromobenzene 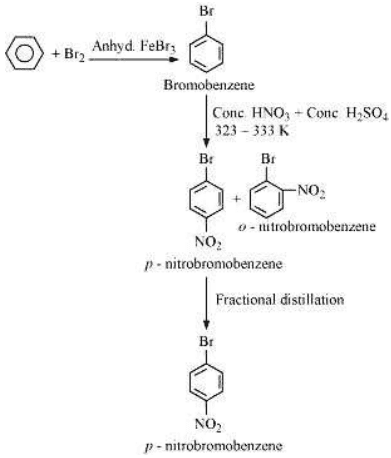 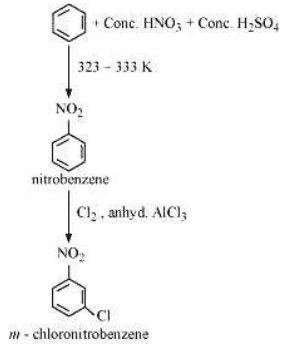 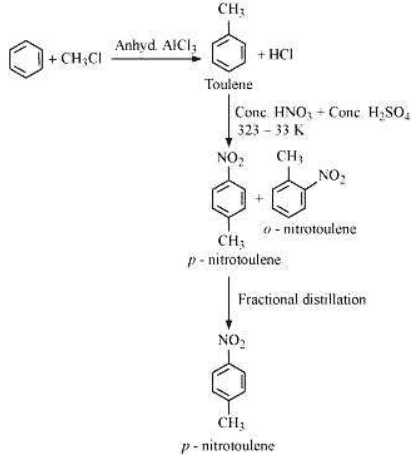 What effect does branching of an alkane chain has on its boiling point?

As the molecule branching increases, the surface area decreases which leads to a small contact area. As a result, the force of the Van-der Waals (or intermolecular force) decreases too. Those forces can be overcome very easily at a relatively lower temperature. Thus, the boiling point of an alkane chain decreases as branching increases.

Addition of HBr to propene yields 2-bromopropane, while in the presence of benzoyl peroxide, the same reaction yields 1-bromopropane. Explain and give mechanism.

The addition of HBr to propene is an example of an electrophilic substitution reaction.

Being an acid, the hydrogen bromide provides an electrophile, H+. This electrophile attacks the propene double bond to form carbocations of 1 ° and 2 °, as shown below: 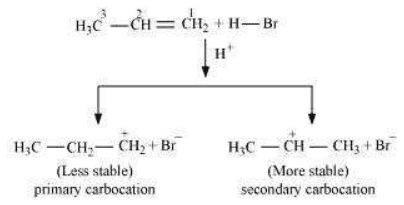 This reaction follows the rule of Markovnikov, in which the negative part of the addendum is attached to the carbon atom with fewer hydrogen atoms than other carbon atoms present in the compound.

While, in the presence of benzoyl peroxide, an addition reaction takes place anti to Markovnikov’s rule. The reaction follows a free radical chain mechanism as shown below: 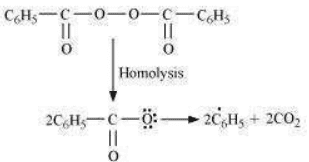 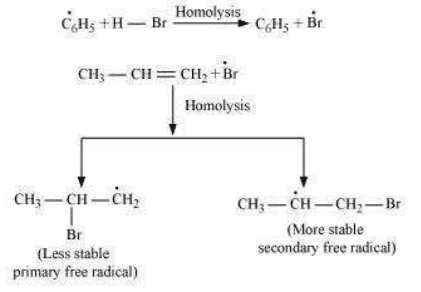 Secondary free radicals are stable in comparison with primary radicals. The secondary radical therefore predominates, for it forms at a faster rate than the primary radical. Therefore 1 – bromopropane is obtained as the main product.

Write down the products of ozonolysis of 1,2-dimethylbenzene (o-xylene). How does the result support Kekulé structure for benzene?

o-xylene has two resonance structures, which are as follows: 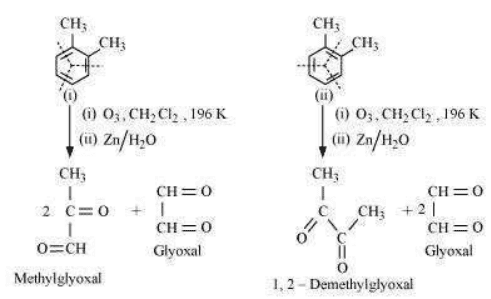 Arrange benzene, n-hexane and ethyne in increasing order of their acidic behavior. Also, give a reason for this behavior.

Acidic character of a species is defined on the basis of the ease with which it can lose its H– atoms.

The hybridization state of carbon in the given compound is:

The s–character decreases in the order:

Benzene is a planar molecule with electrons delocalized under and above the ring plane. Hence, it is a material rich in electrons. As a consequence, electron-deficient species, i.e., electrophiles, are extremely attractive.

How would you convert the following compounds into benzene? 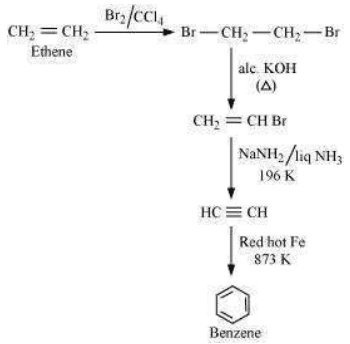 Write structures of all the alkenes which on hydrogenation give 2-methylbutane.

The basic structure of 2-methylbutane is shown below:

On the basis of the above structure, various alkenes that will give 2-methylbutane on hydrogenation are shown below:

Electrophiles are reagents that participate in a reaction by accepting a pair of electrons to bind to nucleophiles.

The higher the density of electrons on a benzene ring, the more reactive the compound is to an electrophile, E+ (Electrophilic reaction).

Since, Cl – group is less electron-withdrawing (due to the inductive effect) than NO2 –group (due to resonance effect), the increasing order of reactivity is as follows:

(b) While NO2– group is electron-withdrawing, CH3– is an electron-donating group.

Toluene therefore has the maximum density of electrons, and is most easily attacked by E+. Since NO2– is an electron-removing group. Therefore, when the number of NO2 substitutes is higher, the order is the following.:

Out of benzene, m–dinitrobenzene and toluene, state the increasing order of nitration. Justify your answer?

The ease of nitration depends on the presence of electron density on the compound to form nitrates. Nitration reactions are examples of electrophilic substitution reactions where a nitronium ion (NO2–) attacks an electron-rich species.

List the names of some Lewis acid which can be used during ethylation of benzene in a Friedel-Craft alkylation reaction.

In the Friedel-Craft alkylation reaction, any Lewis acid such as anhydrous AlCl3, FeCl3, SnCl4, BF3 etc. may be used during the ethylation of benzene.

Why is Wurtz reaction not preferred for the preparation of alkanes containing odd number of carbon atoms? Illustrate your answer by taking one example

Wurtz reaction can not be used to produce unsymmetric alkanes (i.e. alkanes with an odd number of carbon atoms), because if two dissimilar alkyl halides are used as reactants, a mixture of alkanes is obtained as the items. Since the reaction involves free radical species, there is also a side reaction to creating an alkene.

The boiling points of alkanes (obtained in the mixture) are very close. Hence, it becomes difficult to separate them.

The topics given in class 11 syllabus are the basics of the topics to be taught in class 12th. Students are advised to solve go through this NCERT solution to determine their strengths and weaknesses and plan their study accordingly. Along with NCERT questions, students should try to solve the previous year questions as well as the CBSE sample papers to get acquainted with the latest exam pattern and marking scheme.

Students are suggested to visit the website for the latest NCERT solutions for classes 6 to 12 and get full assistance for the exam. Students can also download BYJU’S The Learning App to study using interactive and engaging videos. 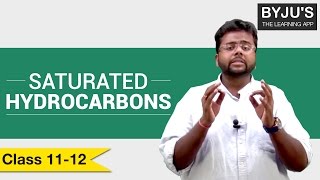