NCERT Solutions are contemplated as an exceptionally helpful book while preparing for the CBSE Class 11 Economics examinations. This study resource possesses an intense knowledge and the Solutions collated by the subject matter experts are no different. This chapter is a brief introduction to the concept of Employment Growth, Informalisation And Other Issues. 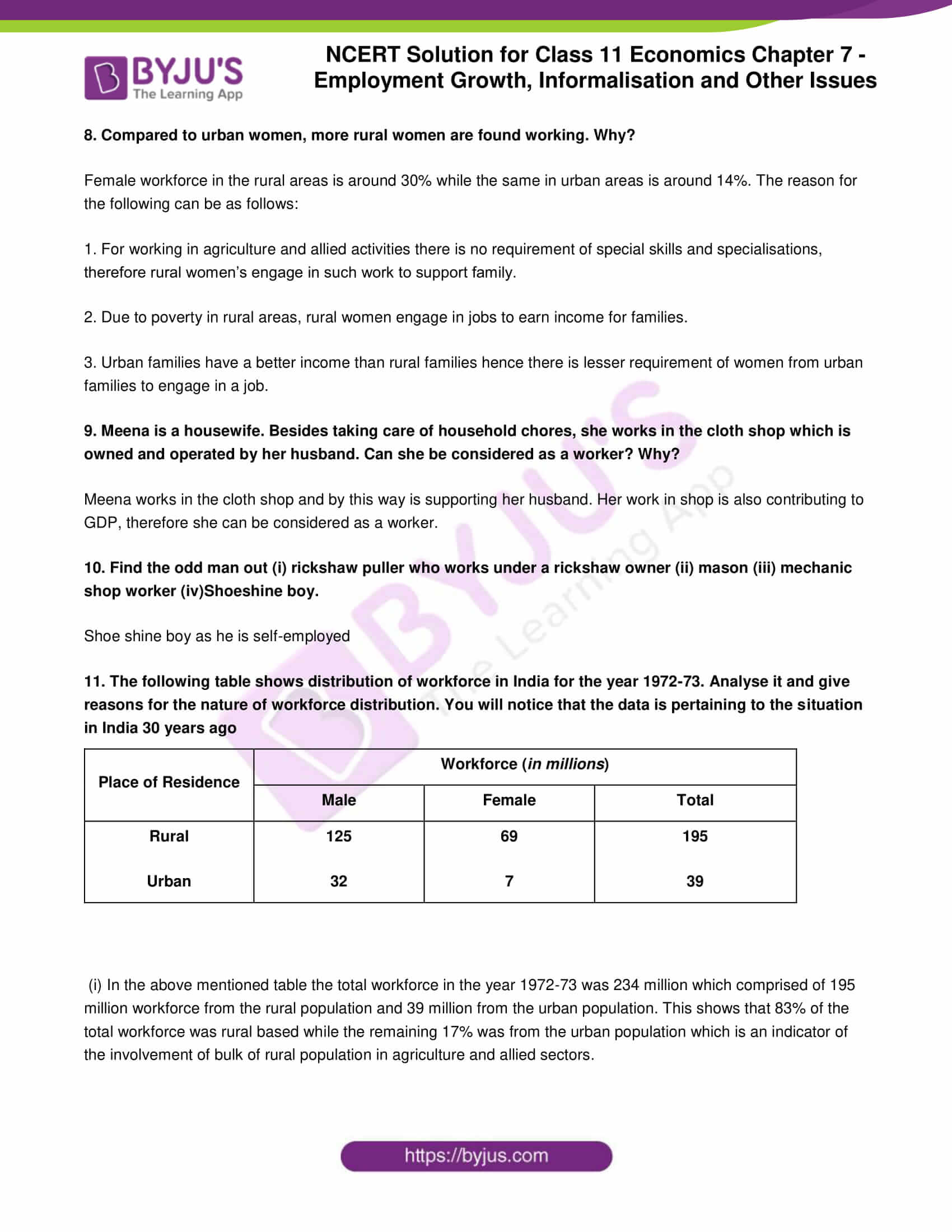 A worker is defined as a person who is involved in production activity and is actively contributing towards the flow of goods and services in the economy.

It is defined as that part of the population that is providing active service in the production of goods and services. For calculating worker population ratio we have to divide the total work force by the total population and multiplying by 100. It is an indicator that helps in assessing the level of employment in a country at any point in time. It can be denoted in formulae as:

3. Are the following workers — a beggar, a thief, a smuggler, a gambler? Why?

None of them can be called as workers as they are not involved in any such activity that contributes to GDP of the country.

4. Find the odd man out (i) owner of a saloon (ii) a cobbler (iii) a cashier in Mother Dairy (iv) a tuition master (v) transport operator (vi) construction worker.

Cashier in mother diary is the odd one as he is salaried.

7. Raj is going to school. When he is not in school, you will find him working in his farm. Can you consider him as a worker? Why?

Yes, because he is contributing towards the total output of the farm and as per definition of a worker, Raj can be considered as a worker.

1. For working in agriculture and allied activities there is no requirement of special skills and specialisations, therefore rural women’s engage in such work to support family.

2. Due to poverty in rural areas, rural women engage in jobs to earn income for families.

3. Urban families have a better income than rural families hence there is lesser requirement of women from urban families to engage in a job.

9. Meena is a housewife. Besides taking care of household chores, she works in the cloth shop which is owned and operated by her husband. Can she be considered as a worker? Why?

Meena works in the cloth shop and by this way is supporting her husband. Her work in shop is also contributing to GDP, therefore she can be considered as a worker.

Shoe shine boy as he is self-employed

11. The following table shows distribution of workforce in India for the year 1972-73. Analyse it and give reasons for the nature of workforce distribution. You will notice that the data is pertaining to the situation in India 30 years ago

(ii) Rural workforce composition was 64% male and 36% female. Whereas in urban population it was 82% male workers and 18% female workers. This shows that the level of participation of males in both urban and rural population was higher than females as there were less opportunities for women education. Society structure was such that it discouraged females from taking up a job.

(iii) It can be seen that women workforce in rural area was 36% while it is 18% for the urban women. Majority of the rural population was agriculture based or in some allied activities, still had low productivity. Less productivity leads to poverty.

From the above data it can be concluded that 30 years back the Indian economy was in a state of acute unemployment and poverty. There was disguised unemployment in agriculture and a low level of female participation in the workforce.

12. The following table shows the population and worker population ratio for India in 1999-2000. Can you estimate the workforce (urban and total) for India?

Therefore it can be seen that workers in urban areas were around 9.61 crores and the total workforce of India was approximately 39.7 crores.

13. Why are regular salaried employees more in urban areas than in rural areas?

Salaried employees are those who are on permanent payroll of an employer. This is true for skilled workers. The concentration of salaried workers is more in urban areas as the jobs in urban areas requires workers with special skills, such centres exist in urban areas where people can get trained and enhance those skills in order to earn regular salary. Training requires education that cannot be obtained in rural areas. Companies and industries also look for proper skilled workers available in city. Therefore there is more concentration of salaried employees in urban areas than in rural areas.

14. Why are less women found in regular salaried employment?

Women are involved in economic activities that are not stable and have steady income. A steady income and permanent contract can be obtained from a salaried occupation. As female education is not given a priority, hence they lack professional skills that is necessary for steady employment. Women are more vulnerable when compared to men and possess low bargaining power. Females are paid less than the males. Therefore it is common for women to be in self-employment.

15. Analyse the recent trends in sectoral distribution of workforce in India.

16. Compared to the 1970s, there has hardly been any change in the distribution of workforce across various industries. Comment.

There has been changes in the way workforce is distributed as compared to 1970 and can be shown as follows:

1. The workforce engaged in primary sector was around 74 percent during the year 1970’s while it has come down to 50%. Service sector along with Secondary sector has shown great improvement.

2. More preference is to have a regular employment with salary. But self-employment is where most people are employed.

17. Do you think that in the last 50 years, employment generated in the country is commensurate with the growth of GDP in India? How?

Employment generated in India during the last 50 years is not commensurate with the GDP growth and that’s why it is referred to as the jobless growth. This situation arises when GDP is growing in an economy but there is no expansion of employment opportunities relative to that. In other words the economy is producing more goods and services without generating required level of employment. This phase started with the initialisation of economic reforms in 1991 and since then the economy was failing to maintain balance between GDP and employment growth rate.

18. Is it necessary to generate employment in the formal sector rather than in the informal sector? Why?

It is necessary to generate employment in formal sector for these reasons:

1. Formal sectors provide benefits such as pension, gratuity, provident fund which is not there in informal sector.

2. There is assurance of regular income in formal sector

3. More income is there for those working in the formal sector

4. Poverty and income inequality will be reduced if more employment is generated in formal sector

19. Victor is able to get work only for two hours in a day. Rest of the day, he is looking for work. Is he unemployed? Why? What kind of jobs could persons like Victor is doing?

Victor is not an unemployed worker. Instead he is working only two hours a day which is not sufficient enough to be considered as a full time worker as per statistics by National Sample Survey is one who works for 28 hours a week is said to be underemployed. The works that Victor does can include delivering newspaper, working in a restaurant, courier delivery boy and teller in bank.

20. You are residing in a village. If you are asked to advice the village panchayat, what kinds of activities would you suggest for the improvement of your village which would also generate employment.

1. Increase in production from agriculture and industrial sectors can help in increasing employment. Small scale industries should be encouraged in order to generate more employment.

2. Higher produce results in demand of more workers. Rural workers should be made aware of the new technologies and how it will help them in getting employed.

3. Rise in population leads to lack of jobs and unemployment. Population should be controlled by adopting proper safety measures (birth control)

4. The rural areas should be allowed to level up using suggestions and moving away from an agrarian based economy.

5. Finance should be readily provided with facilities of credit so that it will help the farmers.

6. Schools should be setup for educating the village children and also technical knowledge for workers.

21. Who is a casual wage labourer?

Workers who are not engaged in full time work are said to be casual workers. They do not have a permanent job and have perks like gratuity and provident funds. The unskilled workers comprise this segment.

22. How will you know whether a worker is working in the informal sector?

1. Worker who are working in an enterprise which has 10 or less than 10 workers (apart from public and private sector establishments)

2. Farmers, labourers, self-employed people, and owner of small enterprises are all informal workers.

3. Workers who are not having pension, gratuity and provident fund.

4. Workers in informal sectors are not covered under all the Labour Laws except for Minimum Wages Act, therefore workers are subjected to uncertainties in the market.