The protagonist of the chapter ‘The Adventures of Toto’ is Toto, a monkey. He is bought by the author’s grandfather from a tonga driver. Toto is pretty but very impish. Gradually when Toto grows up, the author and his family realize that Toto is not a pet they can keep with themselves forever. Why? Read the chapter to know.

The solutions given have been designed by our team of subject-matter experts, as per the guidelines of the CBSE board. The NCERT Solutions for Class 9 can even be downloaded in printable PDF format for free, through the link provided below, so that students can learn anytime, anywhere. 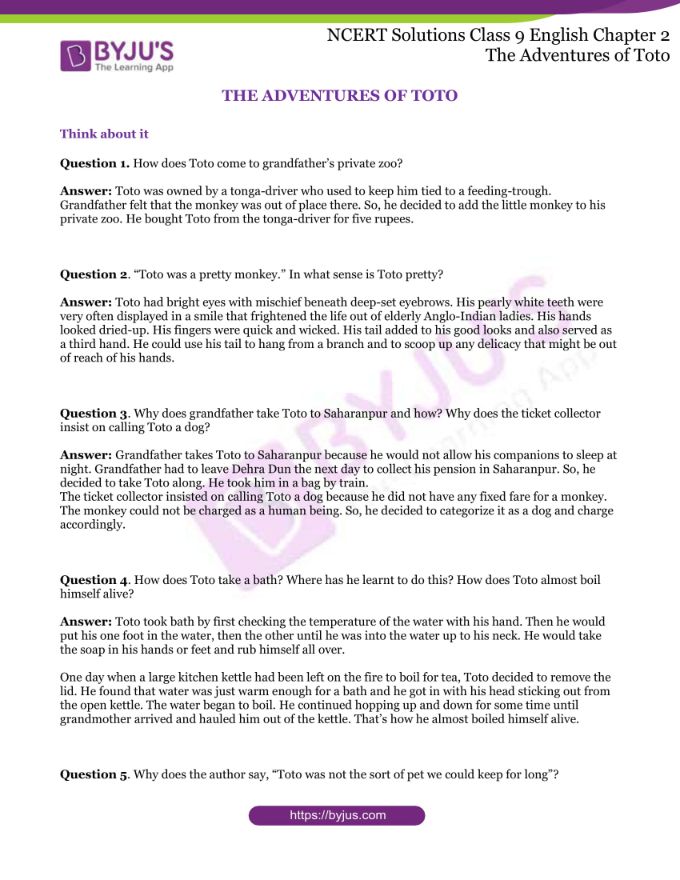 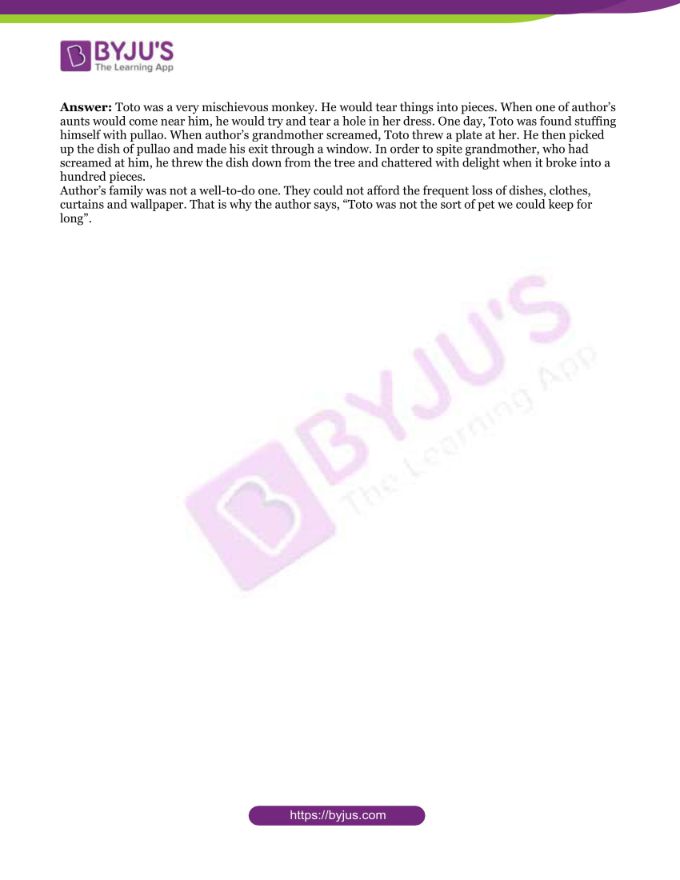 The Adventures of Toto

Question 1. How does Toto come to grandfather’s private zoo?

Answer: Toto was owned by a tonga-driver who used to keep him tied to a feeding-trough. Grandfather felt that the monkey was out of place there. So, he decided to add the little monkey to his private zoo. He bought Toto from the tonga-driver for five rupees.

Question 2. “Toto was a pretty monkey.” In what sense is Toto pretty?

Answer: Toto had bright eyes with mischief beneath deep-set eyebrows. His pearly white teeth were very often displayed in a smile that frightened the life out of elderly Anglo-Indian ladies. His hands looked dried-up. His fingers were quick and wicked. His tail added to his good looks and also served as a third hand. He could use his tail to hang from a branch and to scoop up any delicacy that might be out of reach of his hands.

Question 3. Why does grandfather take Toto to Saharanpur and how? Why does the ticket collector insist on calling Toto a dog?

Answer: Grandfather takes Toto to Saharanpur because he would not allow his companions to sleep at night. Grandfather had to leave Dehra Dun the next day to collect his pension in Saharanpur. So, he decided to take Toto along. He took him in a bag by train.

The ticket collector insisted on calling Toto a dog because he did not have any fixed fare for a monkey. The monkey could not be charged as a human being. So, he decided to categorize it as a dog and charge accordingly.

Answer: Toto took bath by first checking the temperature of the water with his hand. Then he would put his one foot in the water, then the other until he was into the water up to his neck. He would take the soap in his hands or feet and rub himself all over.

One day when a large kitchen kettle had been left on the fire to boil for tea, Toto decided to remove the lid. He found that water was just warm enough for a bath and he got in with his head sticking out from the open kettle. The water began to boil. He continued hopping up and down for some time until grandmother arrived and hauled him out of the kettle. That’s how he almost boiled himself alive.

Question 5. Why does the author say, “Toto was not the sort of pet we could keep for long”?

Answer: Toto was a very mischievous monkey. He would tear things into pieces. When one of author’s aunts would come near him, he would try and tear a hole in her dress. One day, Toto was found stuffing himself with pullao. When author’s grandmother screamed, Toto threw a plate at her. He then picked up the dish of pullao and made his exit through a window. In order to spite grandmother, who had screamed at him, he threw the dish down from the tree and chattered with delight when it broke into a hundred pieces.

Author’s family was not a well-to-do one. They could not afford the frequent loss of dishes, clothes, curtains and wallpaper. That is why the author says, “Toto was not the sort of pet we could keep for long”.