For detailed solutions to the questions of the book, refer here. You can also download these NCERT Solutions for Class 9 in printable PDF format for free, through the link provided below. The solutions have been crafted by our team of experts, keeping in mind the guidelines of the CBSE board.

NCERT Solutions for Class 9 English Chapter 4 In the Kingdom of Fools:-Download PDF 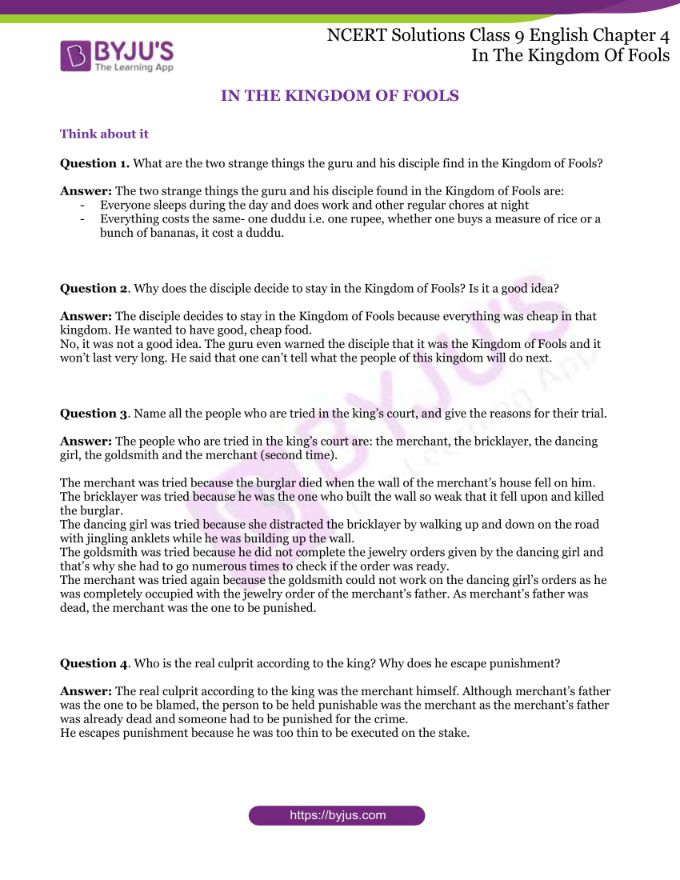 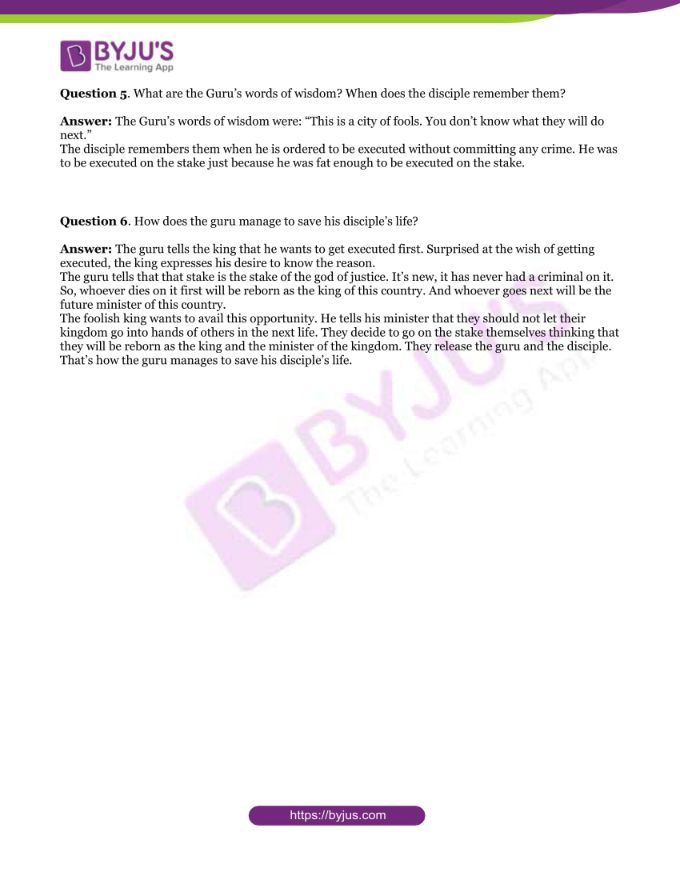 In The Kingdom Of Fools

Question 1. What are the two strange things the guru and his disciple find in the Kingdom of Fools?

Answer: The two strange things the guru and his disciple found in the Kingdom of Fools are:

Question 2. Why does the disciple decide to stay in the Kingdom of Fools? Is it a good idea?

Answer: The disciple decides to stay in the Kingdom of Fools because everything was cheap in that kingdom. He wanted to have good, cheap food.

No, it was not a good idea. The guru even warned the disciple that it was the Kingdom of Fools and it wouldn’t last very long. He said that one can’t tell what the people of this kingdom would do next.

Question 3. Name all the people who are tried in the king’s court, and give the reasons for their trial.

Answer: The people who are tried in the king’s court are: the merchant, the bricklayer, the dancing girl, the goldsmith and the merchant (second time).

The merchant was tried because the burglar died when the wall of the merchant’s house fell on him.

The bricklayer was tried because he was the one who built the wall so weak that it fell upon and killed the burglar.

The dancing girl was tried because she distracted the bricklayer by walking up and down on the road with jingling anklets while he was building up the wall.

The goldsmith was tried because he did not complete the jewelry orders given by the dancing girl and that’s why she had to go numerous times to check if the order was ready.

Question 4. Who is the real culprit according to the king? Why does he escape punishment?

He escapes punishment because he was too thin to be executed on the stake.

Question 5. What are the Guru’s words of wisdom? When does the disciple remember them?

Answer: The Guru’s words of wisdom were: “This is a city of fools. You don’t know what they will do next.”

Question 6. How does the guru manage to save his disciple’s life?

Answer: The guru tells the king that he wants to get executed first. Surprised at the wish of getting executed, the king expresses his desire to know the reason.

The guru responds that that stake is the stake of the God of justice. It’s new, it has never had a criminal on it. So, whoever dies on it first will be reborn as the king of this country. And whoever goes next will be the future minister of this country.

The foolish king wants to avail this opportunity. He tells his minister that they should not let their kingdom go into hands of others in the next life. They decide to go on the stake themselves thinking that they would be reborn as the king and the minister of the kingdom. They release the guru and the disciple. That’s how the guru manages to save his disciple’s life.

Chapter 4 – In the Kingdom of Fools Summary

The chapter “In the Kingdom of Fools” is written by A. K. Ramanujan.

A kingdom where everything costs a rupee- be it a measure of rice or a bunch of bananas. A kingdom where everyone sleeps in the day and works throughout the night. Strange, isn’t it? Well, ‘In the Kingdom of Fools’, anything is possible. This amazing story takes us through the little journey of a Guru and his disciple in this weird kingdom. Refer NCERT Solutions for Class 9 for best scores in board and competitive exams. It is a detailed and well-structured solution for a solid grip of the concept-based learning experience. NCERT Class 9 English Solutions are made available in both web and PDF format for ease of access.

Are the BYJU’S NCERT Solutions for Class 9 English Supplementary Chapter 4 free to download?

Each and every study material available online differs from one another. Instead of searching for the best reference book, students can directly access the solutions from BYJU’S. The answers for each and every chapter are designed by the experts with utmost care to help students gain a hold on the important concepts. Learning the chapter from the solutions PDF will enable logical thinking abilities among students to ace the exam without fear. The PDF format of solutions are free to download and can be used by the students while answering the questions from the NCERT textbook.

How to score good marks in the board exams using the NCERT Solutions for Class 9 English Supplementary Chapter 4?

The NCERT Solutions for Class 9 English Supplementary Chapter 4 helps students to learn the concept of the poem or story. The simple language used in the study material creates an interaction between the students and the author. Students will be able to understand what the author has conveyed in his story or poem in the NCERT textbook. Each question is answered in a systematic manner so that remembering the chapter would become easier for the students. The solutions at BYJU’S can be used by the students both in online and offline mode irrespective of time and place.

Why should I refer to the BYJU’S NCERT Solutions for Class 9 English Supplementary Chapter 4?

The NCERT Solutions at BYJU’S is an apt study material which the students can rely on. The solutions are tailored by highly knowledgeable experts who possess vast experience in the respective subject. Students will be able to complete their assignments on time by referring to the solutions. Each and every answer helps to build a strong foundation of the themes. Using the PDF of solutions from BYJU’S will enhance the problem solving skills among students and score well in the exam.