We are providing the students with the most comprehensive and reliable NCERT Solutions for Class 9 English Chapter 5 The Happy Prince. We have covered answers to each and every question of the supplementary reader Moments. These NCERT Solutions for Class 9 English are designed by our subject-matter experts to give students well-structured solutions to the questions of the book.

‘The Happy Prince’ is a heart-warming story of a Prince who is dead and has been made into a statue. His statue is covered with leaves of gold, has sapphires for eyes and rubies in his sword. The ‘happy’ Prince was happy when he was alive because he had never seen sorrow in his palace. But post-death, he sees all the ugliness and the misery of his city.

The solutions are created keeping in mind the standards set forth by the CBSE board. So, the students can refer to them and get the benefit of good scores in the examinations. To download NCERT Solutions for Class 9 in printable PDF format for free, click on the link provided below and learn anytime, anywhere. 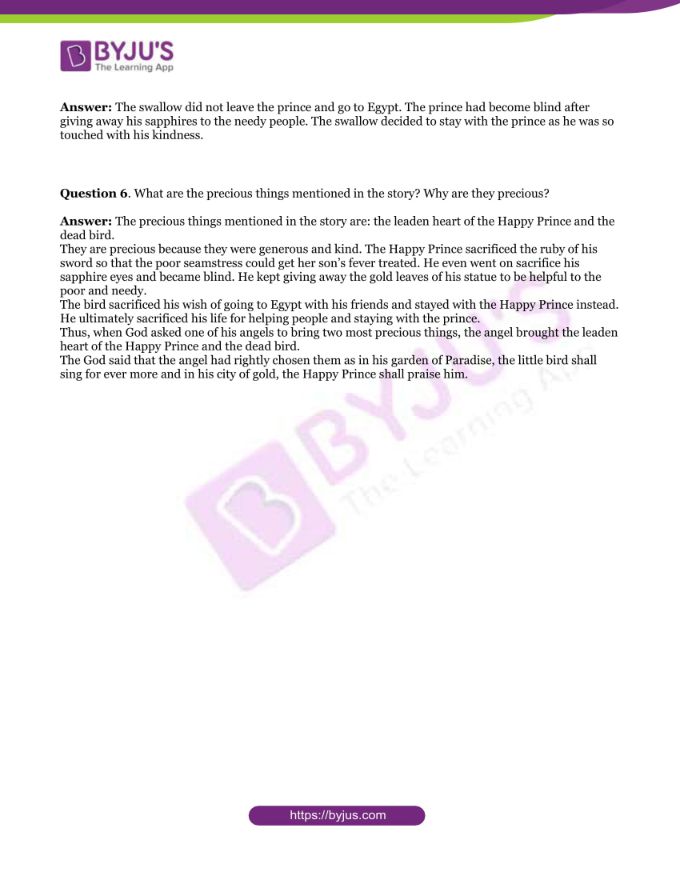 Question 1. Why do the courtiers call the prince ‘the Happy Prince’? Is he really happy? What does he see all around him?

Answer: The courtiers used to call the prince ‘the Happy Prince’ because when he was alive, he did not know what tears were, for he lived in the Palace, where sorrow was not allowed to enter.

No, he not happy anymore. When he died, he was made into a statue and placed at a height from where he could see the ugliness and poverty in the city.

Answer: The Happy Prince sends a ruby for the seamstress because she was poor and her son was ill with fever. Her son asks her to give him oranges but all she has is river water.

The swallow was requested by the Happy Prince to visit and give the ruby to the seamstress. When the swallow reached her house, she was asleep and the little boy was tossing feverishly. The swallow kept the ruby on the table beside her thimble. He then gently went around the boy’s bed, fanning the boy’s forehead with his wings. The boy felt better and went into a deep sleep.

Question 3. For whom does the prince send the sapphires and why?

Answer: The prince sends the two sapphires of his eyes for a young writer and a match girl each.

The young writer was trying to finish a play for the Director of the Theatre, but he was too cold to write any more. There was no fire in the grate, and hunger had made him faint.

The Happy Prince sent one of the sapphires of his eyes to him so that he could sell it to the jeweler, buy firewood and finish his play.

The matchgirl’s matches fell in the gutter and got spoiled. She was crying as her father would beat her for this mistake.

The Happy Prince sent the other sapphire to her so that she would not get beaten up when her father sees the gem she has got.

Question 4. What does the swallow see when it flies over the city?

Answer: When the swallow flies over the city, it sees the sharp difference between the lives of the rich and the poor. He sees the rich making merry in their beautiful houses, while the beggars were sitting at the gates. He flows into dark lanes, and sees the white faces of starving children looking out listlessly at the black streets.

Question 5. Why did the swallow not leave the prince and go to Egypt?

Answer: The swallow did not leave the prince and go to Egypt. The prince had become blind after giving away his sapphires to the needy people. The swallow decided to stay with the prince as he was so touched with his kindness.

Question 6. What are the precious things mentioned in the story? Why are they precious?

Answer: The precious things mentioned in the story are: the leaden heart of the Happy Prince and the dead bird.

They are precious because they were generous and kind. The Happy Prince sacrificed the ruby of his sword so that the poor seamstress could get her son’s fever treated. He even went on sacrifice his sapphire eyes and became blind. He kept giving away the gold leaves of his statue to be helpful to the poor and needy.

The bird sacrificed his wish of going to Egypt with his friends and stayed with the Happy Prince instead. He ultimately sacrificed his life for helping people and staying with the prince.

Thus, when God asked one of his angels to bring two most precious things, the angel brought the leaden heart of the Happy Prince and the dead bird.

The God said that the angel had rightly chosen them as in his garden of Paradise, the little bird shall sing for ever more and in his city of gold, the Happy Prince shall praise him.