Sometimes people who are ‘different’ from others are teased, laughed at or not included in a certain activity or group. These people feel hurt, angry, helpless or sad when friends or others treat them in such ways. Have you ever wondered why this happens? In Chapter 2 of CBSE Class 6 Civics, students can explore how such experiences are related to the society they live in. They can also look at how they are connected to the inequalities that exist around them. The best way to revise the Chapter thoroughly and understand the entire concepts covered is to refer to the CBSE Notes Class 6 Civics Chapter 2-Diversity and Discrimination.

Students can just click on the PDF link provided below in this article to access the CBSE Class 6 Social Science Notes Civics Chapter 2.

A variety of things make us what we are- such as how we live, the languages we speak, what we eat, wear, the games we play and the things we celebrate are all influenced both by the geography and history of the place where we live. To get an idea about how diverse India is, just look at these points. Eight major religions of the world are practised in India and there are 1600 languages as people’s mother tongues and a hundred dance forms. However, this diversity is not always celebrated, the reason being people are more comfortable with those that look, dress and think like them. They may consider people who are different as strange or unfamiliar. They may have a preconceived idea about these people. One stereotype is considering villagers as ignorant and people in cities as money-minded and lazy. When our opinions about a sect of people are always negative then these become prejudiced against them. Prejudice means to judge other people negatively or see them as inferior. We can be prejudiced about many things: people’s religious beliefs, the colour of their skin, the region they come from, the accent they speak in, the clothes they wear and more. Owing to prejudices about others, we don’t want to form friendships with them and may even act in ways that hurt them.

To know More the Meaning of Citizenship, Watch The Below Video: 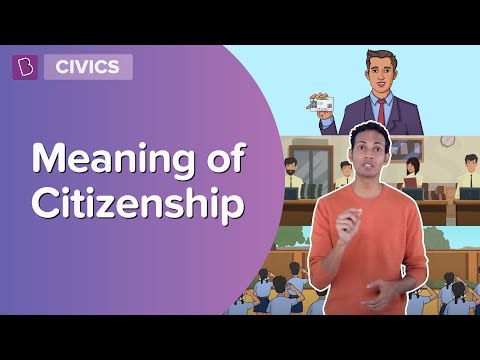 How familiar are you with gender differences? What does it mean to be a boy or a girl? The statement ”They don’t cry”, is generally associated with boys and men. Even as a child, when boys fall and hurt themselves, their parents and other family members often console them by saying “Don’t cry. You are a boy. Boys don’t cry.” Soon, even children start believing that crying is a sign of weakness. He also feels that people would tease him if he cries in front of them so refrains from crying. Another common statement is “This is the way boys are and this is how girls are.” We accept without even thinking, and start believing that each one of us must behave accordingly. We fit all boys and all girls into an image that society creates around us. When we fix people into one image we create a stereotype. Saying that those who belong to a particular country, religion, sex, race or economic background are “stingy,” “lazy,” “criminal” or “dumb,” is using stereotypes. There are stringy and generous people everywhere, in every country, religion, group whether rich or poor, male or female. Stereotypes stop us from looking at each person as a unique individual with his or her own special qualities and skills that are different from others.

Discrimination occurs when people act on their prejudices or stereotypes and because of several reasons. People belonging to different religions can be an aspect of diversity, but, can also be a source of discrimination. Some people who may speak a certain language, follow a particular religion, live in specific regions or so may be discriminated against as their customs or practices may be seen as inferior. Further, the matter of different economic backgrounds is not a form of diversity but of inequality. Some people may experience both kinds of discrimination. They are poor and belong to groups whose culture is not valued. Tribals, some religious groups and even particular regions, are discriminated against for one or more of these reasons.

On being discriminated against

People engage in different kinds of work like teaching, carpentry, pottery, weaving, fishing, farming and more to earn a livelihood. Still, certain kinds of work are valued more than others. This belief is an important aspect of the caste system. In the caste system, communities/ groups of people were placed in a sort of ladder where each caste was either above or below the other. Those who placed themselves at the top of this ladder called themselves upper caste and saw themselves as superior. The groups who were placed at the bottom of the ladder were seen as unworthy and called “untouchables”. Caste rules were set which did not allow the so-called “untouchables” to take on work, other than what they were meant to do. Upper castes acted in ways, which did not give the so-called “untouchables” the same rights as they enjoyed.

Discrimination is not only limited to preventing Dalits from undertaking certain economic activities but it also denies them the respect and dignity given to others.

Dr Bhim Rao Ambedkar (1891-1956) considered the father of the Indian Constitution is also the best-known leader of the Dalits. He was the first person from his caste who completed college education and went to England to become a lawyer. Dr Ambedkar believed that Dalits must fight the caste system and work towards a society based on respect for all persons.

The struggle for freedom from British rule also included within it the struggle of large groups of people who not only fought against the British but also fought to be treated more equally. Dalits, women, Tribals and peasants fought against the inequalities they experienced in their lives.

When India became a nation in 1947 our leaders too were concerned about the different kinds of inequalities that existed. Writers of the Constitution of India (a document that laid out the rules by which the nation would function) were aware of the ways in which discrimination had been practised in our society and how people had struggled against this. Many leaders of these struggles such as Dr Ambedkar had also fought for the rights of the Dalits. So these leaders set out a vision and goals in the Constitution to ensure that all the people of India were considered equal. This equality of all persons is seen as a key-value that unites us all as Indians. The Constitution placed responsibility on the government to take specific steps to realise this right to equality for poor and other such marginal communities. They believed that respect for diversity was a significant element in ensuring equality. They said that the government must treat all religions equally and no one language, religion or festival should become compulsory for all to follow. Therefore, India became a secular country, where people of different religions and faiths have the freedom to practise and follow their religion without any fear of discrimination. Though these ideals are enshrined in our Constitution, inequalities exist even today.

What is the meaning of ‘Prejudice’?

A liking or dislike for one rather than another especially without good reason is meant as ‘Prejudice’.

What is the basis of the caste system in India?

The system which divides Hindus into rigid hierarchical groups based on their karma (work) and dharma duty) is generally accepted to be more than 3,000 years old.

Who was Dr. Bhim Rao Ambedkar?