“Key expectations from Modi Government after years of Turbulence: Union Budget 2020”, is a headline that is splashed across a newspaper. You may have come across many such headlines daily across various magazines and newspapers. However, have you wondered what a government is and the important role that it plays in your lives? What do governments do? How do they decide what to do? What is the difference between different types of governments such as monarchies and democracies? If you want to get a comprehensive idea about the types of Government and its functions, read Chapter 3 of CBSE Class 6 Civics. You can refer to the CBSE Notes Class 6 Civics Chapter 3-What is Government? and revise the entire Chapter for the exam.

In our mission to make learning a fun and easy experience, we have compiled here the simple and most easy to learn CBSE Class 6 Social Science Notes from Civics Chapter 3. Students can also click on the link to download the PDF version for future reference.

Chapter 3 What Is Government

A Government is needed for every country to make decisions and get things done ranging from decisions about where to build roads and schools, or how to reduce the price of onions when they get too expensive or ways to increase the supply of electricity. They also take actions on social issues and other important things like running postal and railway services. In the meantime, the Government is also in charge of protecting the boundaries of the country and maintaining peaceful relations with other countries. Also, at the time of any calamity, it is in charge of organising aid and assistance for the affected people.

If you are wondering how these are done or why it needs to be done, then you need to know that when people live and work together, there needs to be some organisation so that decisions can be made. There need to be some rules that apply to everyone. The territory of a country should be protected and resources have to be controlled. The government can exercise its power and make the decision, also implement the decision amongst the people living in their territory.

Now that you know all that a Government is responsible for, do you know how it manages to do all these things? Government works in three different levels: at the local level (means in your village or town locality), at the level of the state (covers an entire state like Haryana or Assam) and at the national level (relates to the entire country).

For More Information On Levels of Government 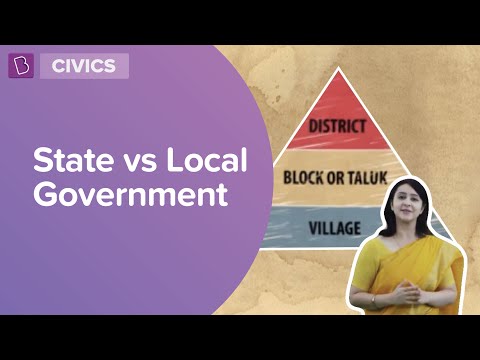 Laws and the Government

The Government makes laws that everyone living in the country has to follow. It cannot only make a decision but can enforce it as well. Given is an example. Everyone driving a motor vehicle is required to have a licence. Any person caught driving a vehicle without a licence can either be jailed or fined a large sum of money. Same as the decisions that the Government can take, people can also take some steps if they feel that a particular law is not being followed. An example of this is given here. If a person feels that they were not hired for a job because of their religion or caste, he or she may approach the court to claim that the law is not being followed. The court can then give orders about what should be done.

India is a democracy as a result of a long and eventful struggle of the Indian people. Other places in the world have also struggled to have democracies. The main feature of a democracy is that the people have the power to elect their leaders so it can be called as a rule by the people. The basic idea is that people rule themselves by participating in the making of these rules. Democratic governments are also usually referred to as representative democracies in which people do not participate directly but, instead, choose their representatives through an election process. These representatives meet and make decisions for the entire population. Meanwhile, a government cannot call itself democratic unless it allows what is known as a universal adult franchise, where all adults in the country are allowed to vote. However, it is not always like this. There was a time when governments did not allow women and the poor to participate in elections. In their earliest forms, governments allowed only men who owned property and were educated, to vote, meaning that women, the poor, the property-less and the uneducated were not allowed to vote. The country was governed by the rules and regulations made by a few men. In India, before Independence, only a small minority was allowed to vote and they, therefore, came together to determine the fate of the majority. Many people including Gandhiji shocked at the unfairness of this practice demanded that all adults have the right to vote, giving rise to the universal adult franchise.

The Government has not willingly shared power anywhere in the world. All over Europe and the USA, women and the poor have had to fight for participation in the government. Women’s struggle to vote strengthened during the 1st World War and came to be called the women’s suffrage movement as the term suffrage usually means right to vote. During the time of war, many of the men were away fighting and because of this women were called to do the work that was earlier considered to be men’s work. This led the people to rethink why they had created so many unfair stereotypes about women and what they were capable of doing. Hence, women were also seen as being equally capable of making decisions. The suffragettes demanded the right to vote for all women and to get their demands heard, they chained themselves to railings in public places. Many suffragettes were imprisoned and went on hunger strikes, and had to be fed by force. American women got the right to vote in 1920 while women in the UK got to vote on the same terms as men some years later, in 1928.

What are the different levels of Government in India?

The government of India majorly comprises of three branches: the executive, the legislative and the judiciary.

What are the functions of State Government?

In India what is legal age for a citizen to vote?

The minimum voting age for citizens to cast their vote in India is 18.