Read about some of the key elements that influence the working of a democratic government, which include people’s participation, the resolution of conflict and equality and justice from Chapter 4 of CBSE Class 6 Civics. Students can understand the concepts well and prepare most efficiently for the exam by revising the CBSE Notes Class 6 Civics Chapter 4-Key Elements of A Democratic Government. We have tried to provide all the key highlights of the Chapter giving a comprehensive explanation for the main topics and concepts covered. These notes are very helpful for students to build up their concepts from the Chapter.

Readers can download these notes given below in this article as PDF using the link download option provided.

Key Elements of A Democratic Government

South Africa is a country of several races including African American people who belong to South Africa, the whites who came there to settle, Indians who came as labourers and traders and so on. Earlier, the country was governed by Apartheid laws. Apartheid means separation on the basis of race. African people were divided into white, African American, Indian and other races. According to the law, these races were not allowed to mingle with each other, live near each other or even use common facilities.

The African National Congress, a group of people led the struggle against apartheid and their most well-known leader, Nelson Mandela fought the apartheid system for several years. Finally, they succeeded and in 1994 South Africa became a democratic country in which people of all races were considered equal.

Why do we have regular elections? It was already discussed in an earlier chapter that people make decisions in a democracy. People elect leaders to represent them via elections. These leaders can also take decisions on behalf of the people. It is believed that these representatives will keep in mind the voices and the interests of the people. Every Government is elected for a fixed period. In India, it is for five years and every Government that is elected is allowed to stay in power for only that period. However, if they want to continue to be in power, then they will have to be re-elected by the people. In this way, regular elections limit the power of the government.

Other ways of participating

Elections are held once every 5 years. Besides voting, people can participate in the process of the Government by taking an interest in its operations and criticising it when required. For example, In August 2005, when the ruling Government of the time increased the money people had to pay for the electricity, they expressed their disapproval very sharply by taking out rallies and organising a signature campaign. Even though the Government tried to explain and defend their decision, they finally listened to the people’s opinion and withdrew the increase.

If a country’s people are alert and interested in how the country is run, the democratic character of the government of that country will be stronger. So the next time we see a rally winding through the streets of our cities and towns or villages we should pause to find out what the rally is about, who is participating in it, and what they are protesting about. This will help to give us a sense of how our government works. While it is true that democracy allows the people to participate, it is not all the sections of people who are actually able to do so.

Finding another way to participate, people organise themselves into social movements that seek to challenge the government and its functioning. Members of the minority community like the Dalits, Adivasis, women and others often participate in this manner. If the people of a country are alert and interested in how the country is run, then the democratic character of the government is expected to be stronger.

It is seen that conflicts can lead to violence and death when one group decides that it is all right to use force to prevent the other group from protesting. Conflicts arise when people of varied cultures, religions, regions or economic backgrounds do not get along with each other, or when some among them feel they are being discriminated against. People may use violent methods to settle their differences, leading to fear and tension among others living in an area. The Government is responsible for resolving conflicts. Religious processions and celebrations also lead to conflicts sometimes. For example, the route a procession takes may lead to a conflict. The government, particularly the police, play an important role in getting representatives of concerned communities to meet and try and arrive at a solution. Nevertheless, there is also fear that violence may erupt, with people throwing stones or trying to disrupt the procession. The police is in charge of ensuring that violence does not take place.

Meanwhile, rivers too can become a source of conflict between states if it begins in one state, flows through another and ends in a third. Sharing of river water between different states that the river goes through can become an issue of conflict. An example is given. The Cauvery Water dispute that broke out between Karnataka and Tamil Nadu is an example. The origins of a legal dispute over Cauvery waters date back to 1892 and by the late 1960s, both states and the Central government began to realize the gravity of the situation as the 50-year run of the 1924 agreement was soon coming to an end. The water stored in Krishna Raja Sagara dam in Karnataka was used for irrigating a number of districts and for meeting the needs of the city of Bengaluru. At the same time, the water stored in Mettur dam in Tamil Nadu was used for crops grown in the delta region of that state. A conflict arose because both dams are on the same river. The downstream dam in Tamil Nadu could only be filled up if the water is released from the upstream one located in Karnataka leading to water scarcity in one state, as both states can’t get as much water as they need for people in their states. This leads to conflict. The central government has to step in to see that a fair distribution is worked out for both states.

The key idea of a democratic government is its commitment to equality and justice, which are inseparable. The earlier practice of untouchability is now banned by law. They were earlier denied education, transport or medical facilities and even the chance to offer prayers. Dr Ambedkar and many others like him realised that such practices must not continue and justice can only be achieved when people are treated equally. The government also recognises this and makes special provisions for groups within society that are unequal.

For Information On Democracy 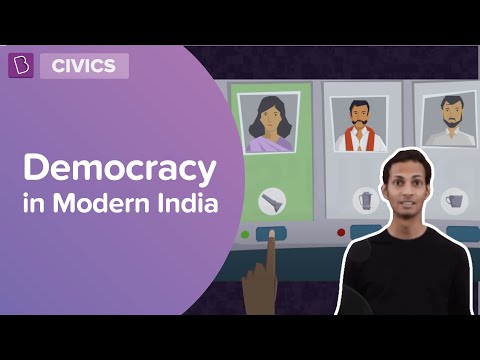 What is a ‘Political conflict’?

A conflict of interest arises when the private interests of a politician or official clash or coincide with that public interest.

What is the meaning of ‘Justice’?

Justice means fair treatment towards everyone in all fronts.

Adivasi is the collective term for the Tribes of the Indian subcontinent, who are considered to be the indigenous people of India.