NCERT Solutions are provided to help the students in understanding the steps to solve mathematical problems that are provided in the textbook. The Miscellaneous Exercise of NCERT Solutions for Class 11 Maths Chapter 11- Conic Sections is based on the following topics:

Each question of the exercises has been carefully solved for the students to understand, keeping the examination point of view in mind. The NCERT Solutions for Class 11 Maths helps the students in understanding all the concepts of Class 11, in-depth. 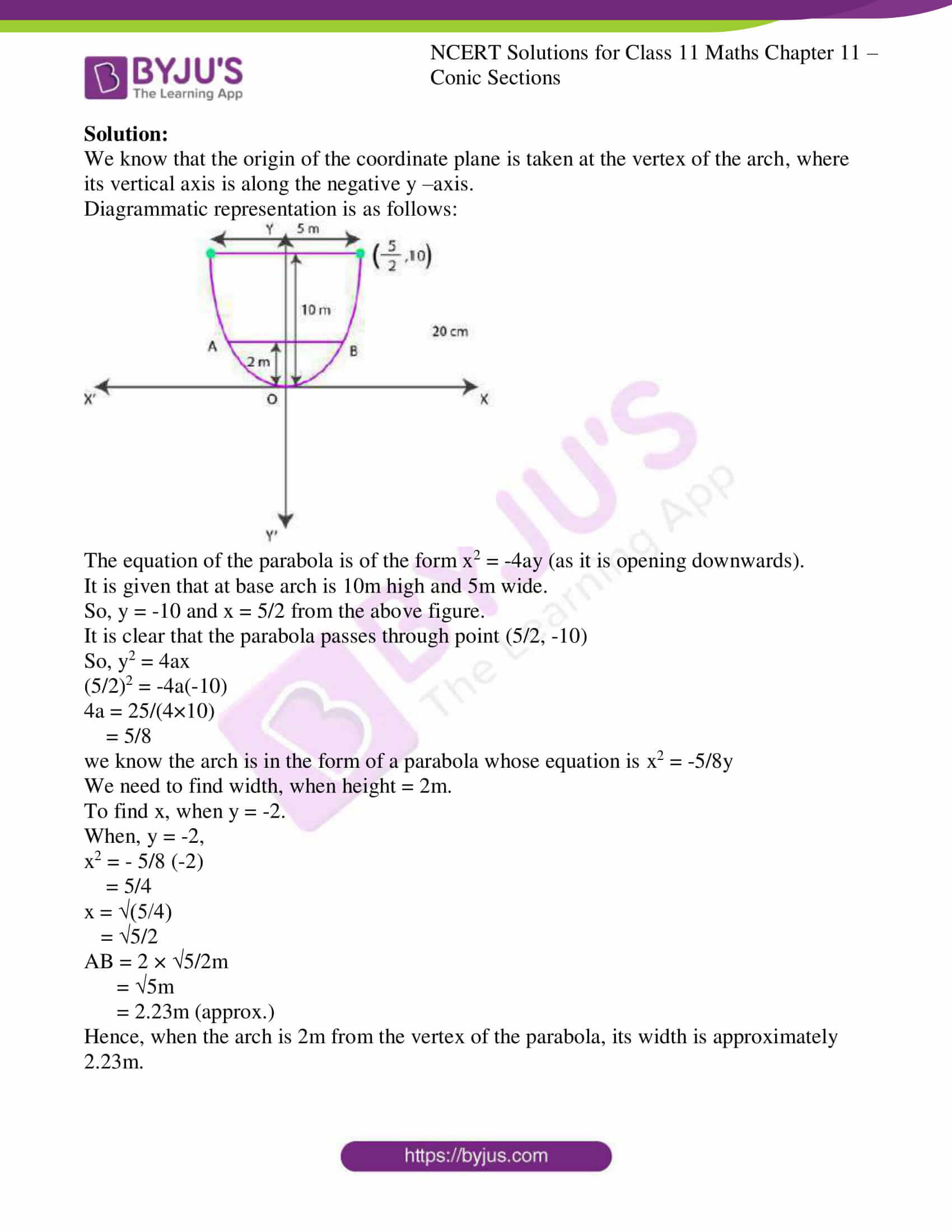 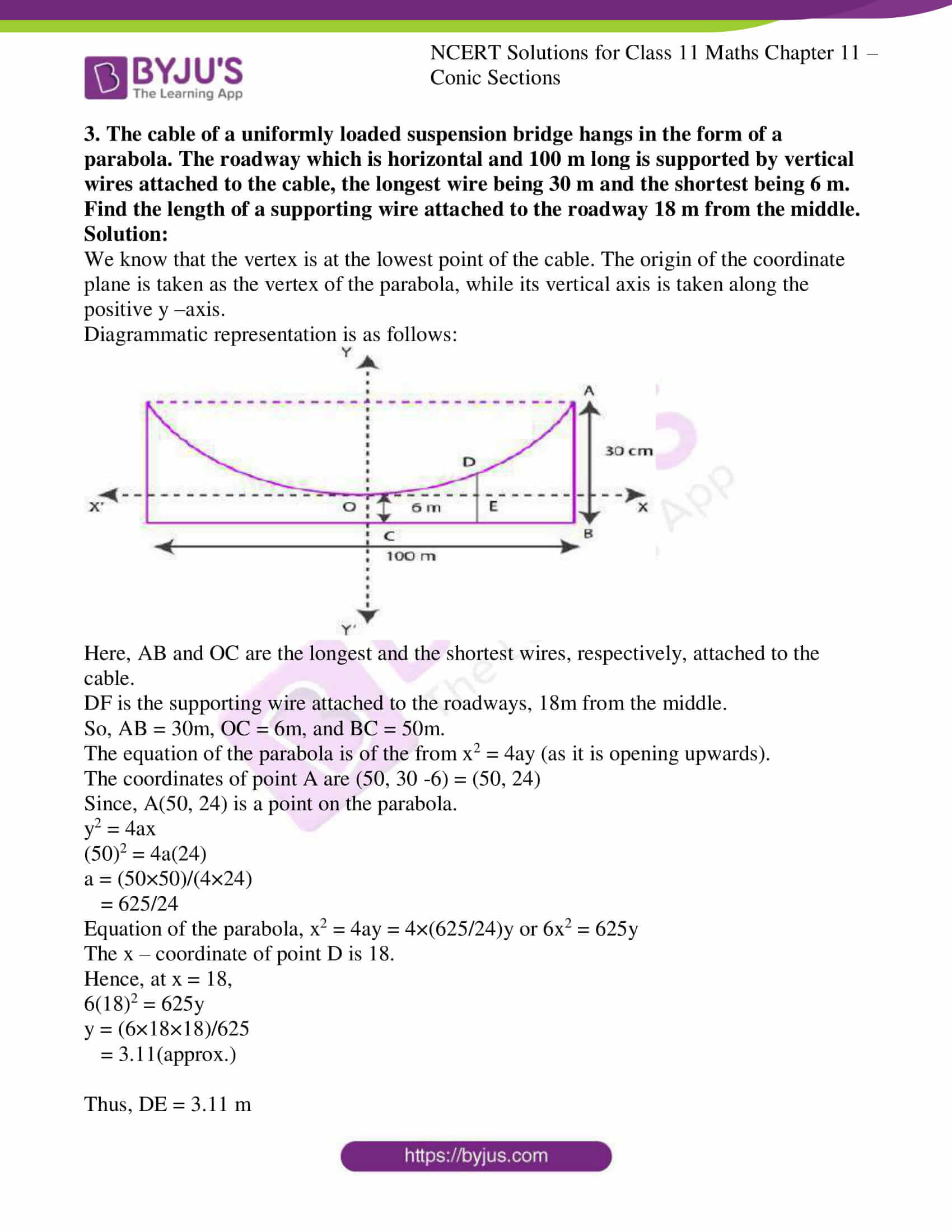 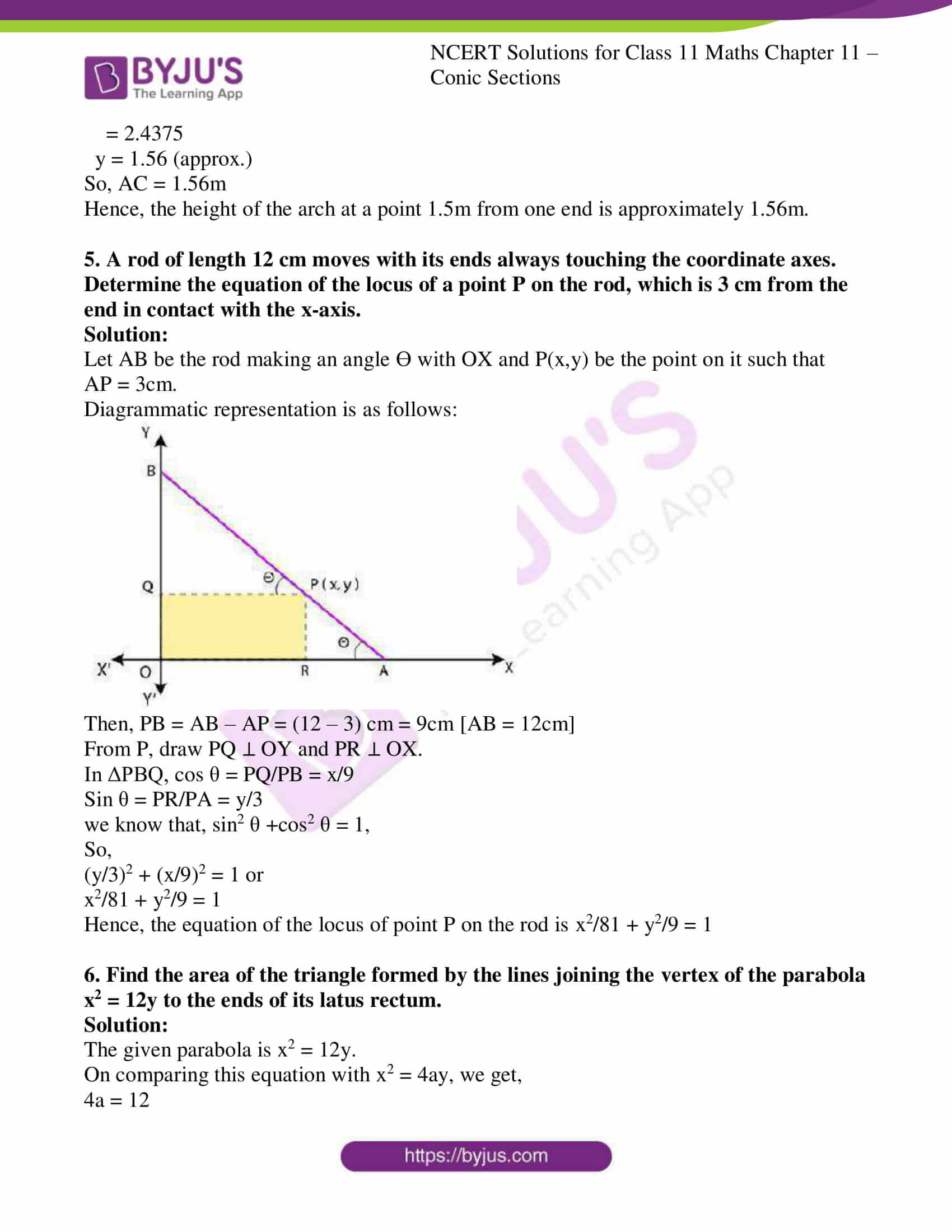 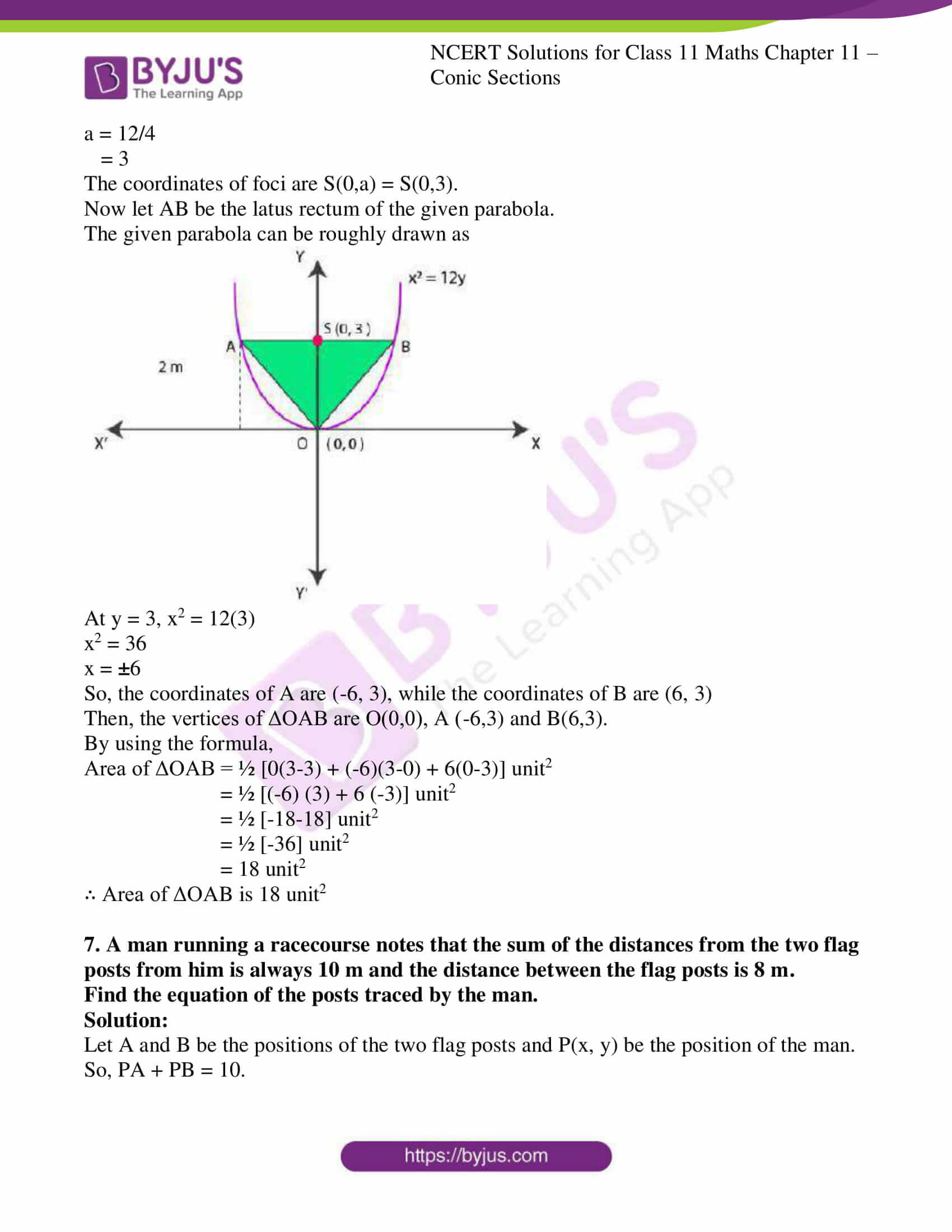 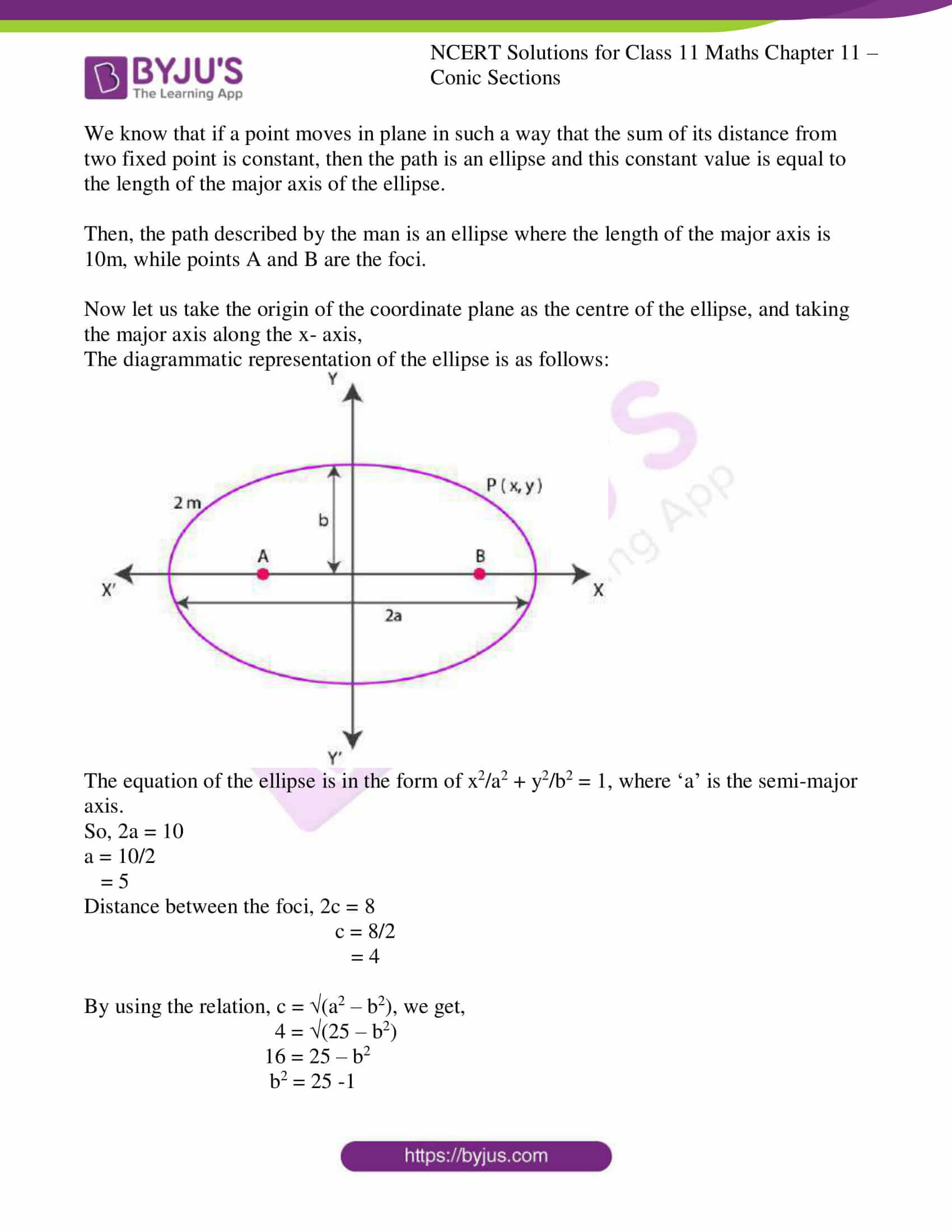 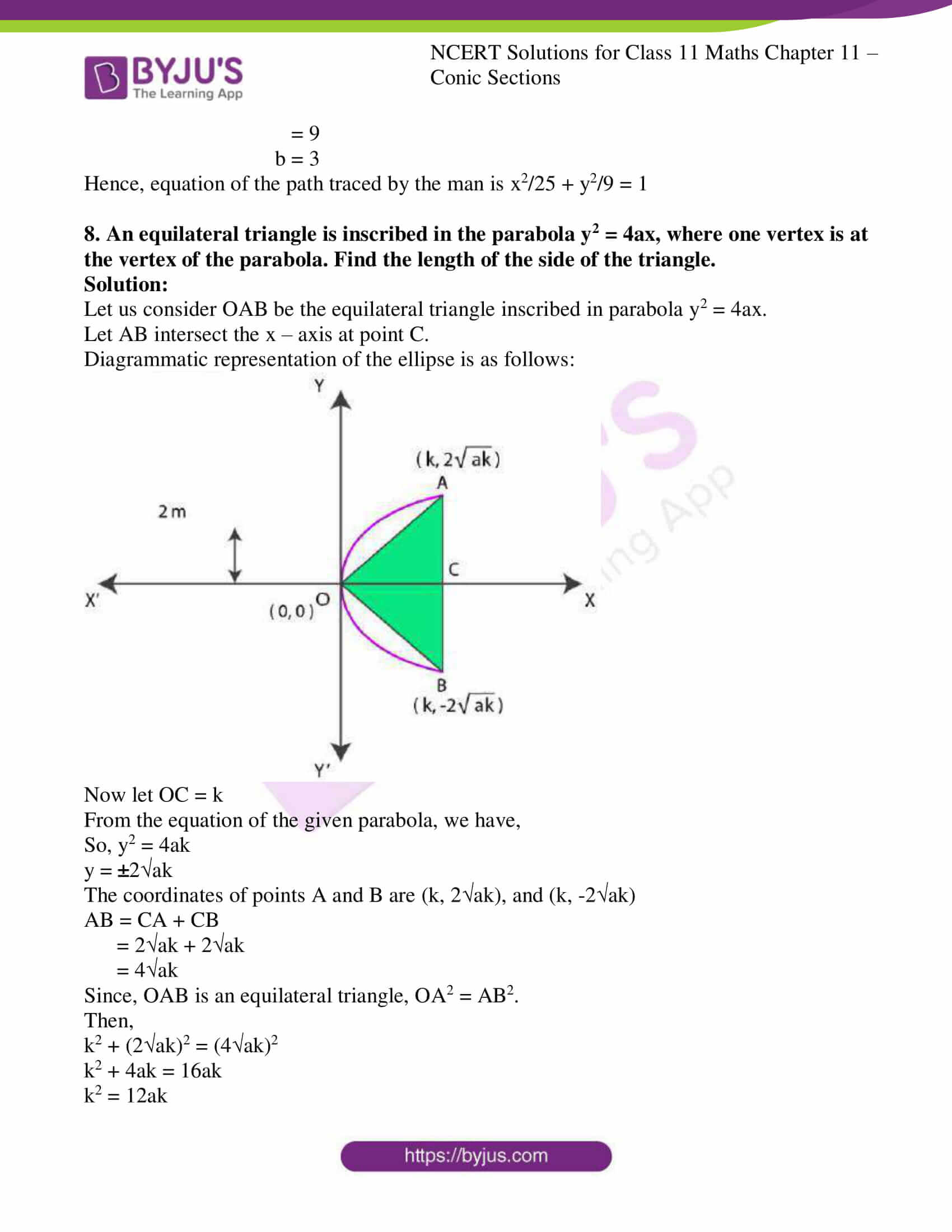 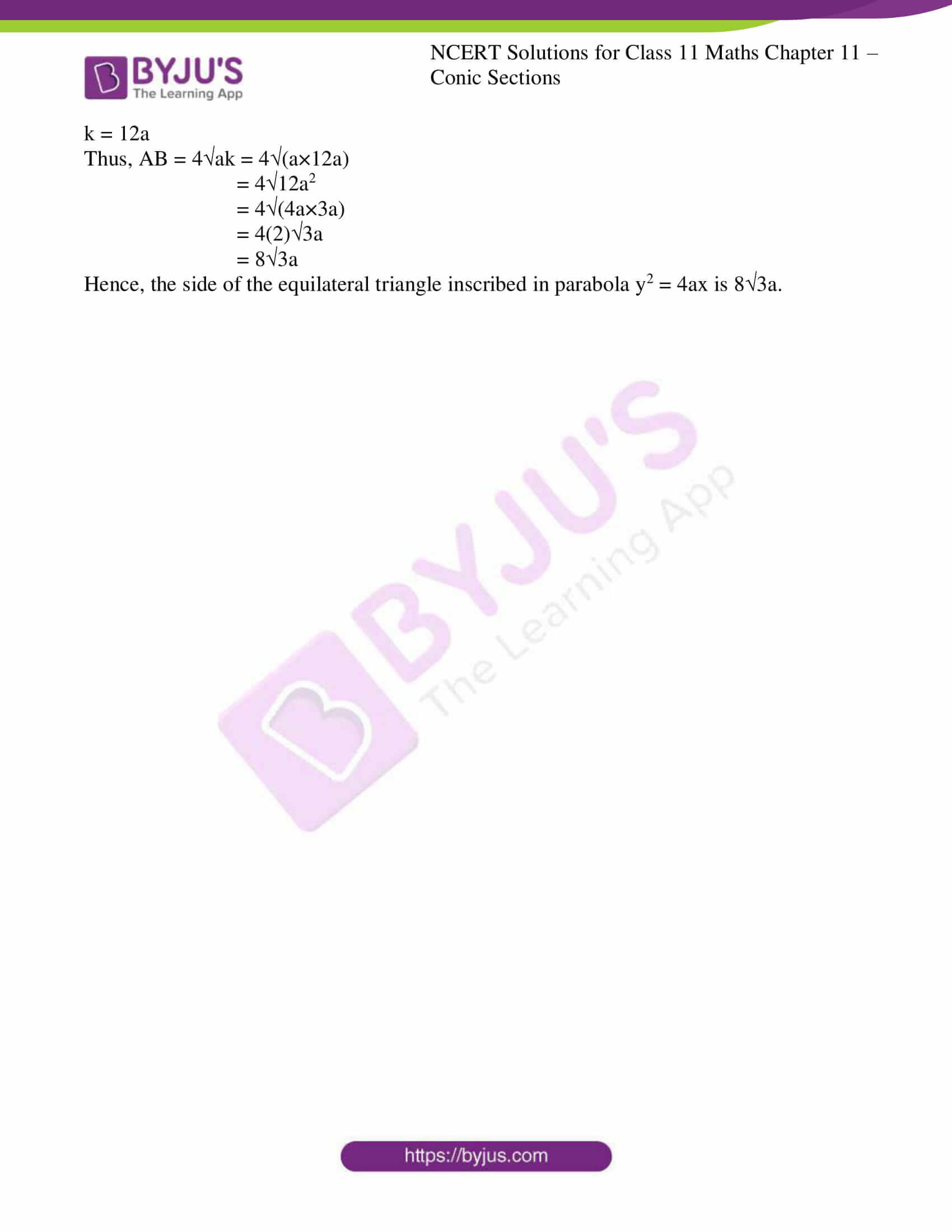 1. If a parabolic reflector is 20 cm in diameter and 5 cm deep, find the focus.

We know that the origin of the coordinate plane is taken at the vertex of the parabolic reflector, where the axis of the reflector is along the positive x – axis. 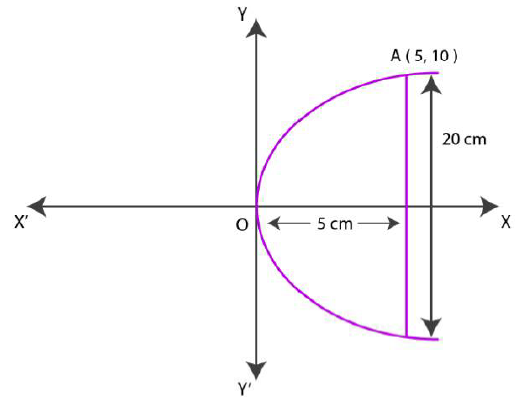 Since, the parabola passes through point A(10, 5),

Hence, the focus of the reflector is at the mid-point of the diameter.

2. An arch is in the form of a parabola with its axis vertical. The arch is 10 m high and 5 m wide at the base. How wide is it 2 m from the vertex of the parabola?

We know that the origin of the coordinate plane is taken at the vertex of the arch, where its vertical axis is along the negative y –axis. 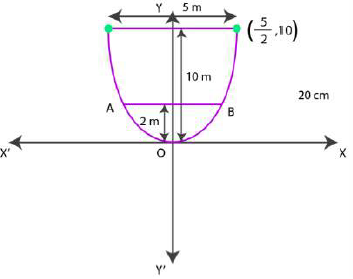 The equation of the parabola is of the form x2 = -4ay (as it is opening downwards).

It is given that at base arch is 10m high and 5m wide.

We need to find width, when height = 2m.

Hence, when the arch is 2m from the vertex of the parabola, its width is approximately 2.23m.

3. The cable of a uniformly loaded suspension bridge hangs in the form of a parabola. The roadway which is horizontal and 100 m long is supported by vertical wires attached to the cable, the longest wire being 30 m and the shortest being 6 m.
Find the length of a supporting wire attached to the roadway 18 m from the middle.

We know that the vertex is at the lowest point of the cable. The origin of the coordinate plane is taken as the vertex of the parabola, while its vertical axis is taken along the positive y –axis. 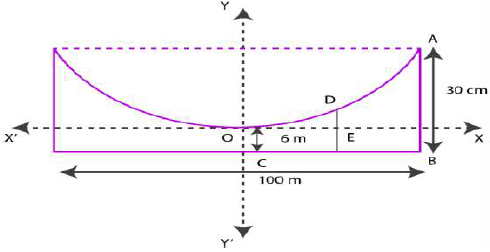 Here, AB and OC are the longest and the shortest wires, respectively, attached to the cable.

DF is the supporting wire attached to the roadways, 18m from the middle.

The equation of the parabola is of the from x2 = 4ay (as it is opening upwards).

Hence, the length of the supporting wire attached to the roadway 18m from the middle is approximately 9.11m.

The origin of the coordinate plane is taken as the centre of the ellipse, while the major axis is taken along the x-axis.

Hence, Diagrammatic representation of semi- ellipse is as follows: 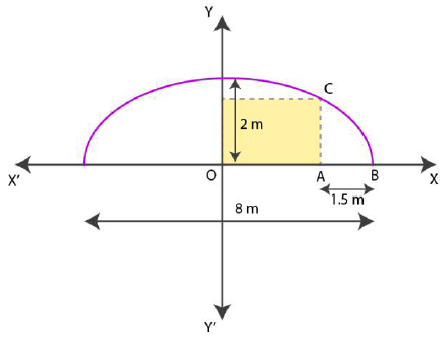 Hence, the height of the arch at a point 1.5m from one end is approximately 1.56m.

5. A rod of length 12 cm moves with its ends always touching the coordinate axes. Determine the equation of the locus of a point P on the rod, which is 3 cm from the end in contact with the x-axis.

Let AB be the rod making an angle Ɵ with OX and P(x,y) be the point on it such that 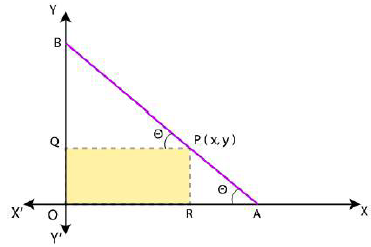 6. Find the area of the triangle formed by the lines joining the vertex of the parabola x2 = 12y to the ends of its latus rectum.

On comparing this equation with x2 = 4ay, we get,

Now let AB be the latus rectum of the given parabola.

The given parabola can be roughly drawn as 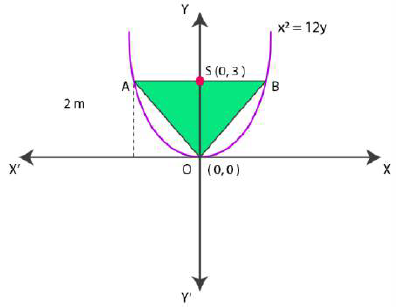 7. A man running a racecourse notes that the sum of the distances from the two flag posts from him is always 10 m and the distance between the flag posts is 8 m.
Find the equation of the posts traced by the man.

We know that if a point moves in plane in such a way that the sum of its distance from two fixed point is constant, then the path is an ellipse and this constant value is equal to the length of the major axis of the ellipse.

Then, the path described by the man is an ellipse where the length of the major axis is 10m, while points A and B are the foci.

Now let us take the origin of the coordinate plane as the centre of the ellipse, and taking the major axis along the x- axis,

The diagrammatic representation of the ellipse is as follows: 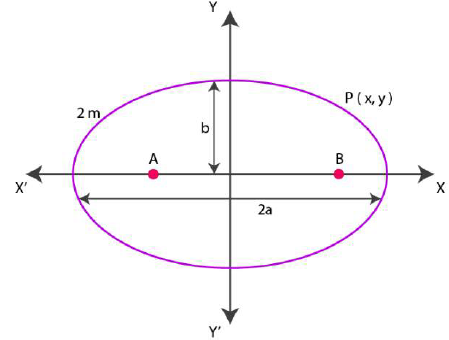 8. An equilateral triangle is inscribed in the parabola y2 = 4ax, where one vertex is at the vertex of the parabola. Find the length of the side of the triangle.

Let us consider OAB be the equilateral triangle inscribed in parabola y2 = 4ax.

Diagrammatic representation of the ellipse is as follows: 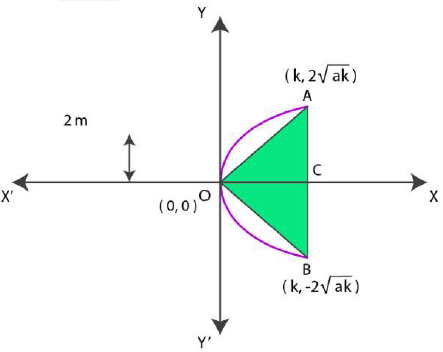 From the equation of the given parabola, we have,

Since, OAB is an equilateral triangle, OA2 = AB2.

Hence, the side of the equilateral triangle inscribed in parabola y2 = 4ax is 8√3a.