Chapter 5 Lines and angles discusses the various angles formed when two lines meet. Before we get into this discussion, let us recall the following terminologies. 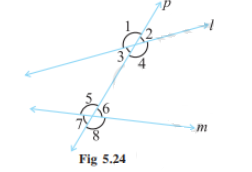 The following relationships are observed when a transversal cuts two parallel lines. Learn more about lines and angles and other related topics including class 7 maths notes, at BYJU’S.