The use of iron began in the subcontinent almost 3000 years ago. Some of the largest collections of iron tools and weapons were found in the megalithic burials. Around 2500 years ago, there was evidence for the growing use of iron tools. These included axes for clearing forests and the iron ploughshare. Learn more about the related concepts of Vital Villages, Thriving Towns from Chapter 8 of CBSE Class 6 History. Students can revise the Chapter with the help of CBSE Notes Class 6 History Chapter 8-Vital Villages, Thriving Towns.

Click on the PDF link provided below in this article to access the CBSE Class 6 Social Science Notes of Chapter 8 History.

Use of iron can be traced back 3000 years with growing use reflecting some 2500 years ago. These iron tools used included axes for clearing forests and the iron ploughshare, most useful for increasing agricultural production.

Other steps to increase production: irrigation

Kings and kingdoms needed the support of flourishing villages to exist. The new tools and the system of transplantation increased production. Irrigation was also used. Irrigation works built during this time included canals, wells, tanks, and artificial lakes.

Who lived in the villages?

3 different kinds of people lived in villages in the southern and northern parts of the subcontinent. Large landowners were known as vellalar, whereas ordinary ploughmen were known as uzhavar. Meanwhile, landless labourers, including slaves, were known as kadaisiyar and adimai. The northern part of the country had village headman or grama bhojaka. The men from the same family held the position for generations and post was hereditary for grama bhojaka. He was the largest landowner and had slaves. He hired workers to cultivate the land and was powerful. King often used him to collect taxes from the village. He functioned as a judge and policeman. Apart from the grama bhojaka, other independent farmers-grihapatis were smaller landowners. The men and women such as the dasa karmakara did do not own land, but had to earn a living working on the fields owned by others. In most villages, there were also some crafts persons such as the blacksmith, potter, carpenter and weaver.

For More Information On Village Headman or Grama Bhojaka 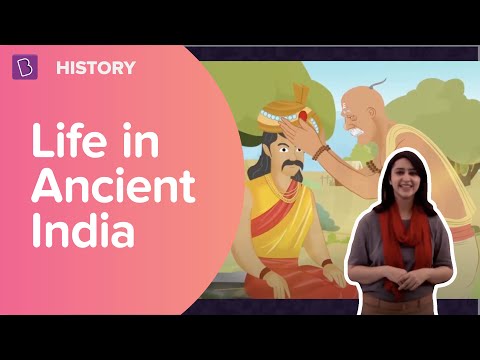 Finding out about cities: stories, travellers, sculpture and archaeology

Jatakas are stories that were composed by ordinary people and written down and preserved by Buddhist monks. Other kinds of evidence to find out about life in some of these early cities. Sculptor’s carved scenes depicting peoples’ lives in towns, villages and forest and were used to decorate railings, pillars and gateways of buildings that were visited by people.

Cities developed from about 2500 years ago as capitals of the mahajanapadas. Some of these cities were surrounded by massive fortification walls and archaeologists have found rows of pots or ceramic rings arranged one on top of the other, known as ring wells. They were used as toilets in some cases and as drains and garbage dumps. These are usually found in individual houses. There was hardly any remains of palaces, markets, or of homes of ordinary people. They are yet to be discovered by archaeologists. Others, made of wood, mud-brick and thatch, may not have survived. Find out about early cities from accounts of sailors and travellers who visited them. Most detailed accounts that have been found was by an unknown Greek sailor, which described all the ports he visited.

Wealth measured in terms of coins and archaeologists found several thousands of coins belonging to this period. Earliest coins were in use for about 500 years with punch marked coins that are generally rectangular or sometimes square or round in shape. These are cut out of metal sheets or made out of flattened metal globules (a small spherical body) and not inscribed, but were stamped with symbols using dies or punches. These coins found over most parts of the subcontinent were in circulation till the early centuries CE.

Cities with many functions

Mathura is an important settlement for more than 2500 years which is important, located at the crossroads of two major routes of travel and trade — from the northwest to the east and from north to south-fortifications around the city and several shrines. Farmers and herders from adjoining areas provided food for people in the city. Mathura a centre where some extremely fine sculpture was produced, around 2000 years ago became second capital of the Kushanas. Mathura was also a religious centre  and there were Buddhist monasteries, Jaina shrines-an important centre for the worship of Krishna. The inscriptions on surfaces such as stone slabs and statues found in Mathura are short inscriptions, recording gifts made by men (and sometimes women) to monasteries and shrines-made by kings and queens, officers, merchants, and crafts persons who lived in the city.

Archaeological evidence for crafts-extremely fine pottery, known as the Northern Black Polished Ware (NBPW)- generally found in the northern part of the subcontinent-know from texts-manufacture of cloth was important-famous centres such as Varanasi in the north-Madurai in the south-men and women worked in these centres-crafts persons and merchants now formed associations known as shrenis–shrenis of crafts persons provide training, procured raw material, and distributed the finished product- shrenis of merchants organised the trade-also served as banks, where rich men and women deposited money- invested, and part of the interest was returned or used to support religious institutions such as monasteries.

Arikamedu (in Puducherry)-a coastal settlement where ships unloaded goods from distant lands-massive brick structure (a warehouse found at the site)-pottery from the Mediterranean region, such as amphorae (tall double-handled jars that contained liquids such as wine or oil) -stamped red-glazed pottery, known as Arretine Ware, named after a city in Italy- made by pressing wet clay into a stamped mould-another kind of pottery made locally, though Roman designs were used-Roman lamps, glassware and gems found at the site. Small tanks found-were probably dyeing vats, used to dye cloth-plenty of evidence for the making of beads from semi-precious stones and glass.

Rome-one of the oldest cities in Europe-developed around the same time as the cities in the Ganga valley-capital of one of the largest empires — spread across Europe, North Africa, and West Asia. Augustus- most important emperors-ruled about 2000 years ago-found Rome a city of brick-made it into a city of marble-He, and later rulers, built temples and palaces-also built huge amphitheatres— open arenas surrounded by tiers of seats — where citizens could watch all kinds of shows, and public baths (with separate timings for men and women), where people met and relaxed. Huge aqueducts — channels to supply water — were built to bring water to the city — for the baths, fountains and toilets.

Where is ‘Arikamedu’ located?

Arikamedu is now an archaelogical site which is present few miles south of the southeastern Indian city of Pondicherry, at present situated in Kakkayanthope.

Which is identified as the oldest village in India?

Malana is an ancient Indian village in the state of Himachal Pradesh. This village is known to be the oldest village in India.

1. India has never invaded any country in her last history of 10000 years of history.2. India invented the number system.3. Ayurveda was invented in India.