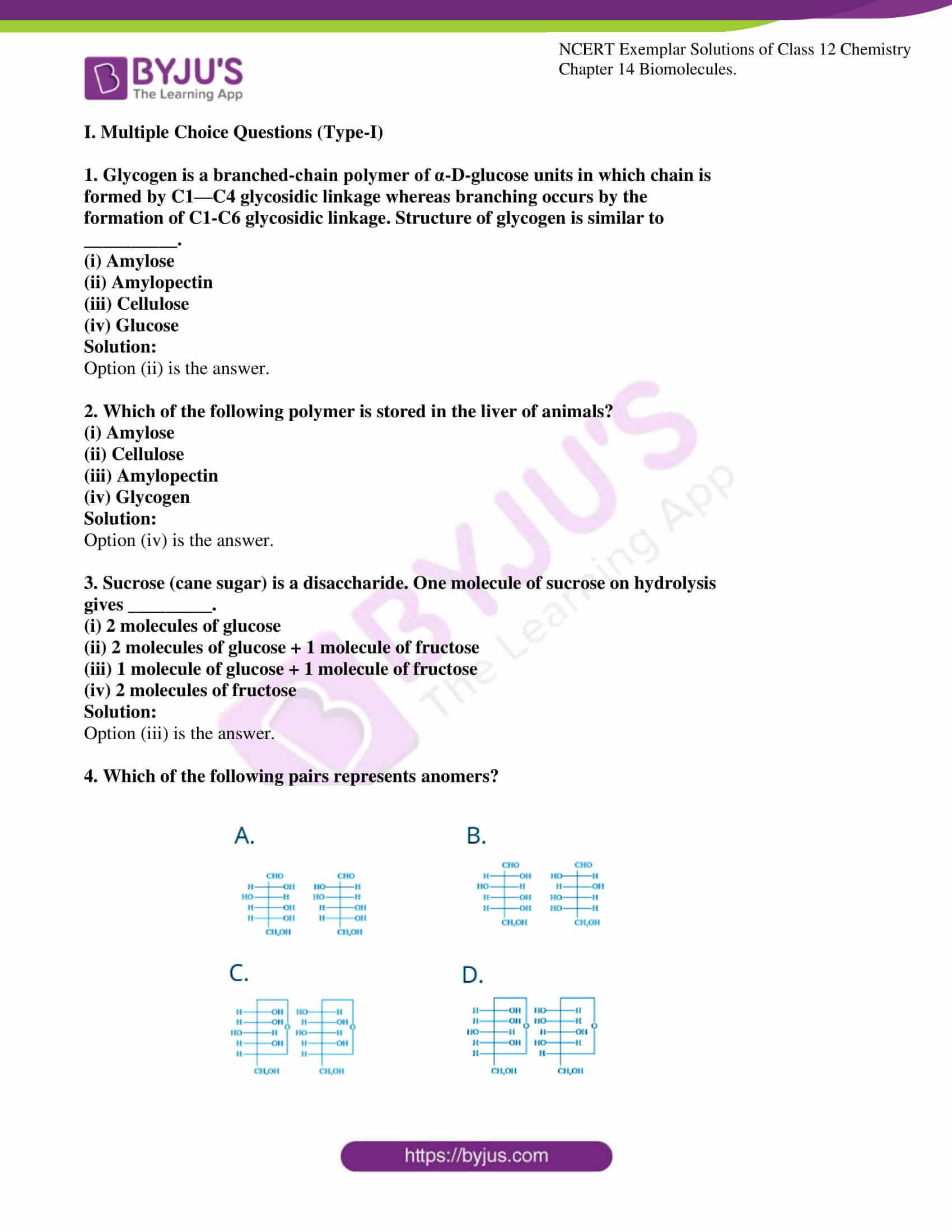 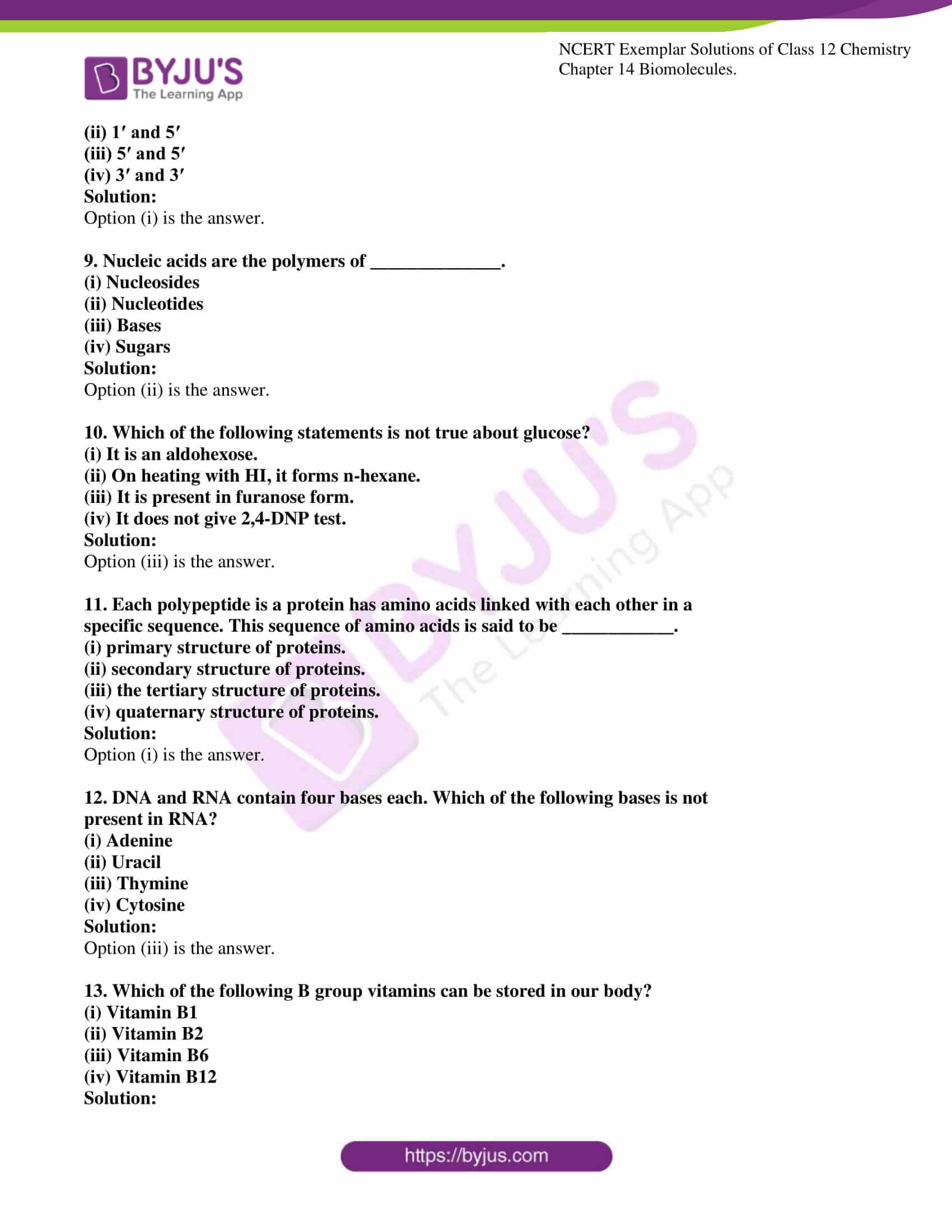 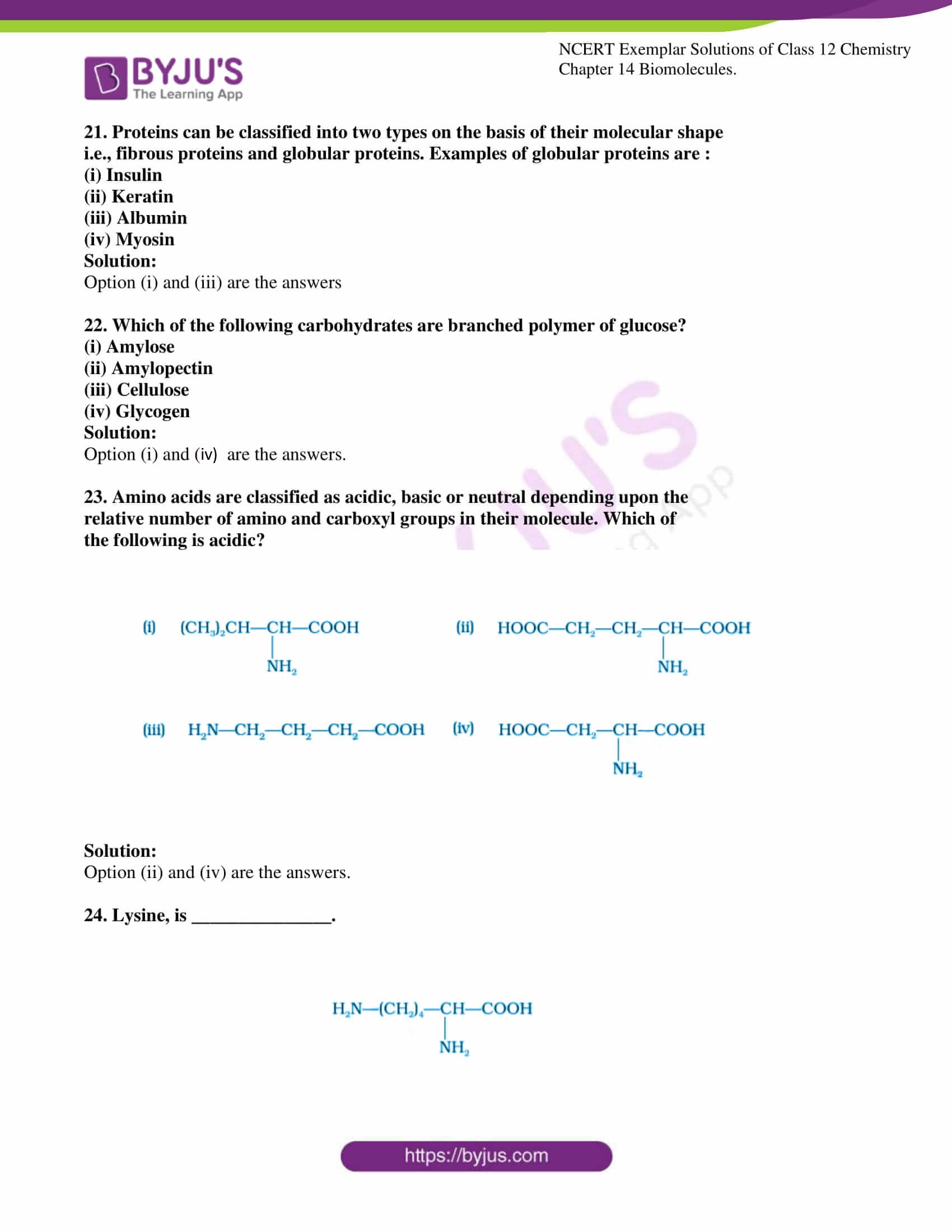 1. Glycogen is a branched-chain polymer of α-D-glucose units in which chain is

formed by C1—C4 glycosidic linkage whereas branching occurs by the

formation of C1-C6 glycosidic linkage. Structure of glycogen is similar to

2. Which of the following polymer is stored in the liver of animals?

3. Sucrose (cane sugar) is a disaccharide. One molecule of sucrose on hydrolysis

(i) 2 molecules of glucose

4. Which of the following pairs represents anomers?

Option (C) is the answer.

5. Proteins are found to have two different types of secondary structures viz.

α-helix and β-pleated sheet structure. α-helix structure of the protein is stabilised

Option ( iii) is the answer.

6. In disaccharides, if the reducing groups of monosaccharides i.e. aldehydic or

ketonic groups are bonded, these are non-reducing sugars. Which of the

following disaccharide is a non-reducing sugar?

Option (B) is the answer.

7. Which of the following acids is a vitamin?

8. Dinucleotide is obtained by joining two nucleotides together by phosphodiester

linkage. Between which carbon atoms of pentose sugars of nucleotides are

Are these linkages present?

10. Which of the following statements is not true about glucose?

(i) It is an aldohexose.

(ii) On heating with HI, it forms n-hexane.

(iii) It is present in furanose form.

11. Each polypeptide is a protein has amino acids linked with each other in a

(i) primary structure of proteins.

(iii) the tertiary structure of proteins.

12. DNA and RNA contain four bases each. Which of the following bases is not

13. Which of the following B group vitamins can be stored in our body?

14. Which of the following bases is not present in DNA?

15. Three cyclic structures of monosaccharides are given below which of these are anomers.

(iv) III is anomer of I and II

16. Which of the following reactions of glucose can be explained only by its cyclic

(ii) Glucose reacts with hydroxylamine to form an oxime.

(iii) Pentaacetate of glucose does not react with hydroxylamine.

(iv) Glucose is oxidised by nitric acid to gluconic acid.Solution:

17. Optical rotations of some compounds along with their structures are given

below which of them have D configuration.

18. Structure of a disaccharide formed by glucose and fructose is given below.

19. Three structures are given below in which two glucose units are linked. Which

of these linkages between glucose, units are between C1 and C4 and which

linkages are between C1 and C6? 20. Carbohydrates are classified on the basis of their behaviour on hydrolysis

21. Proteins can be classified into two types on the basis of their molecular shape

Option (i) and (iii) are the answers

22. Which of the following carbohydrates are branched polymer of glucose?

23. Amino acids are classified as acidic, basic or neutral depending upon the

relative number of amino and carboxyl groups in their molecule. Which of

the following is acidic?

25. Which of the following monosaccharides are present as five-membered cyclic

27. Which of the following are purine bases?

28. Which of the following terms are correct about enzyme?

29. Name the sugar present in milk. How many monosaccharide units are present

in it? What are such oligosaccharides called?

30. How do you explain the presence of all the six carbon atoms in glucose in a straight chain?

When glucose is heated for a prolonged time with HI, it forms n-hexane, suggesting that all the six carbon atoms are linked in a straight chain.

A nucleoside is formed when a nitrogenous base is attached to a 1’ position of a five-carbon sugar. Phosphoric acid is linked to the 5’ carbon of the sugar in a nucleoside molecule to give a nucleotide molecule.

33. Under what conditions glucose is converted to gluconic and saccharic acid?

34. Monosaccharides contain carbonyl group hence are classified, as aldose or ketose. The number of carbon atoms present in the monosaccharide molecule is also considered for classification. In which class of monosaccharide will you place fructose?

The molecular formula of fructose is C6H12O6. It also contains a ketone group, hence it is placed in the class of ketohexoses. Monosaccharides are classified depending on the number of carbon atoms the molecule contains.

35. The letters ‘D’ or ‘L’ before the name of a stereoisomer of a compound indicates

the correlation of configuration of that particular stereoisomer. This refers to

their relationship with one of the isomers of glyceraldehyde. Predict whether the

The –OH group is linked on the left side of the C5 carbon atom. Hence, the given compound has ‘L’ configuration.

36. Aldopentoses named as ribose and 2-deoxyribose are found in nucleic acids. What is their relative configuration?

37. Which sugar is called invert sugar? Why is it called so?

Sucrose is also known as invert sugar. It is a naturally occurring sugar derived from sugarcane and sugarbeet. The hydrolysis of sucrose brings about a change in the sign of rotation, from Dextro (+) to laevo (–) and thus the product is named as invert sugar.

38. Amino acids can be classified as α-, β-, -, δ- and so on depending upon the relative position of the amino group concerning the carboxyl group. Which type of amino acids forms polypeptide chain in proteins?

39. α-Helix is a secondary structure of proteins formed by twisting of the polypeptide chain into right-handed screw-like structures. Which type of interactions is responsible for making the a-helix structure stable?

A stable α-Helix is formed as a right-handed screw helix structure as the –NH group of each amino acid residue hydrogen is bonded to the –C=O of an adjacent turn of the helix.

40. Some enzymes are named after the reaction, where they are used. What name is given to the class of enzymes which catalyse the oxidation of one substrate with simultaneous reduction of another substrate?

The name given to the class of enzymes which catalyse redox reactions is known as enzyme oxidoreductases. An example is Alcohol Dehydrogenase, which helps in reducing alcohol levels in the human body when alcohol is ingested.

41. During curdling of milk, what happens to sugar present in it?

During curdling of milk, which is caused due to bacteria, the sugar present in milk lactose, is converted to lactic acid.

42. How do you explain the presence of five —OH groups in the glucose molecule?

When glucose is treated with acetic anhydride (CH3CO)2O, in the presence of ZnCl2, it undergoes acetylation to form glucose pentaacetate which confirms the presence of five –OH groups.

43. Why does compound (A) give below not form an oxime?

44. Why must vitamin C be supplied regularly in diet?

Vitamin C is a water-soluble vitamin, and hence the excess is excreted regularly from the body. Since it cannot be stored in the body, vitamin C must be supplied regularly in the diet.

45. Sucrose is dextrorotatory but the mixture obtained after hydrolysis is laevorotatory. Explain.

Sucrose is dextrorotatory in its aqueous solution and rotates plane-polarized light entering the solution 66.5° to the right. When sucrose is hydrolysed with dilute acids or invertase enzyme, it gives two products in equimolar concentration, dextrorotatory D-(+)-glucose and laevorotatory D-(-)-fructose. Thus, hydrolysis of sucrose brings about a change in the sign of rotation, from Dextro (+) to laevo (–). So the hydrolysed mixture is laevorotatory.

46. Amino acids behave like salts rather than simple amines or carboxylic acids. Explain.

An amino acid contains an –NH2 group as well as –COOH. In aqueous solution of the amino acid, the –COOH group loses a proton [H]+ and the –NH2 gains a proton to form a zwitterion which is a salt.

47. Structures of glycine and alanine are given below. Show the peptide linkage in glycylalanine.

The hydroxyl group of glycine is linked to the amine group of alanine by peptide (-CONH) linkage to form glycylalanine.

The amino acid residues of proteins are joined by hydrogen bonds and various other intermolecular forces. On physical or chemical change, the hydrogen bonds are disturbed and native protein unfolds. This process is called denaturation where secondary and tertiary structures are destroyed but the primary structure remains intact.

Mainly the enzymes are biocatalyst which provides an alternative path to reduce the reactions activation energy. Using enzyme sucrase, the hydrolysis of sucrose is much faster than conventional acidic hydrolysis.

50. How do you explain the presence of an aldehydic group in a glucose molecule?

Glucose can be treated with bromine water, which undergoes mild oxidation to give the carboxylic acid gluconic acid, which confirms the presence of an aldehyde group.