Solving these questions will help your preparation for competitive examination and entrance examinations like JEE, JEE Advanced NEET and state board entrance tests. 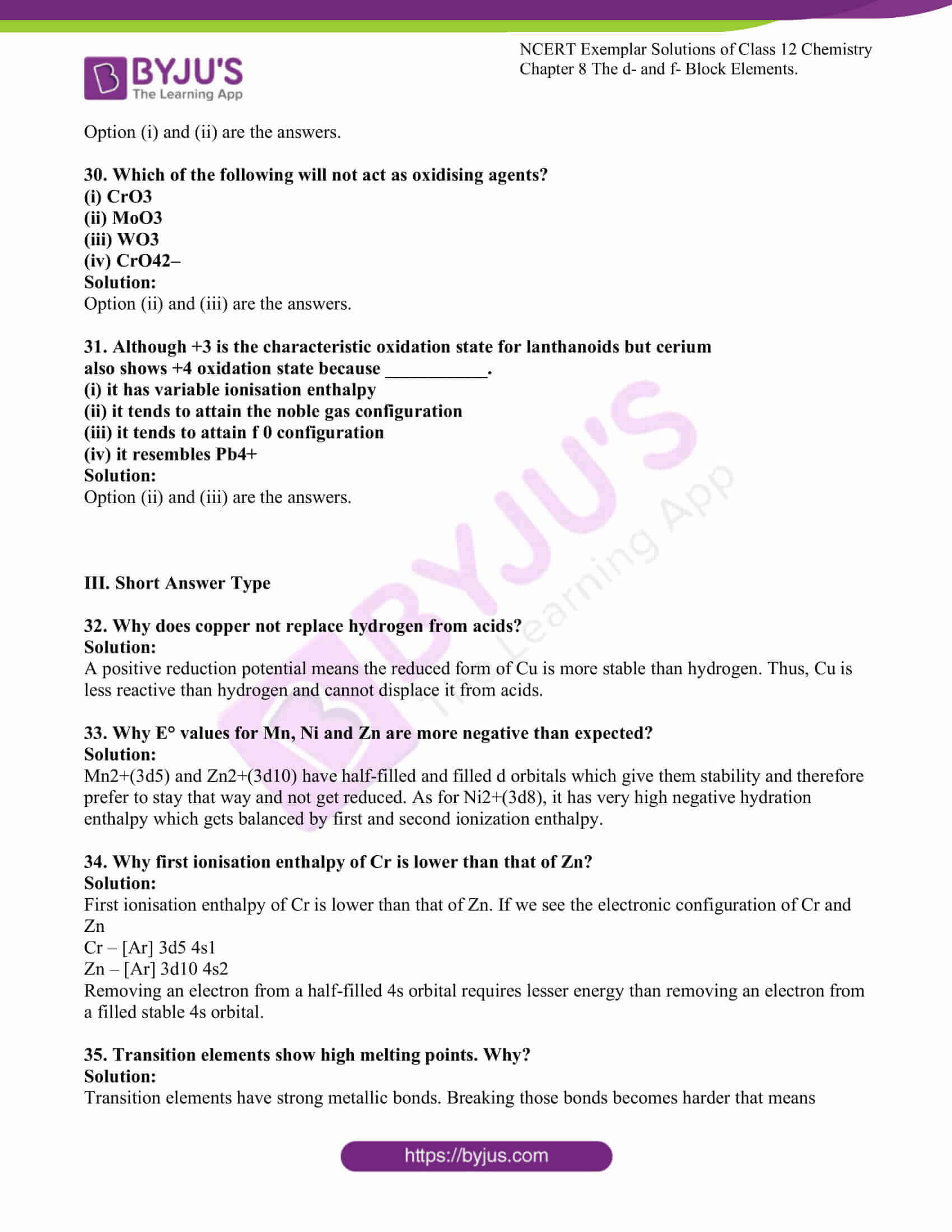 1. Electronic configuration of a transition element X in +3 oxidation state is

of the following is correct?

3. Metallic radii of some transition elements are given below. Which of these

elements will have the highest density?

4. Generally, transition elements form coloured salts due to the presence of unpaired electrons. Which of the following compounds will be coloured in solid-state?

5. On addition of a small amount of KMnO4 to concentrated H2SO4, a green oily compound is obtained which is highly explosive. Identify the compound from the following.

6. The magnetic nature of elements depends on the presence of unpaired

electrons. Identify the configuration of transition element, which shows the highest

7. Which of the following oxidation state is common for all lanthanoids?

8. Which of the following reactions are disproportionation reactions?

9. When KMnO4 solution is added to the oxalic acid solution, the decolourisation is slow in the beginning but becomes instantaneous after some time because

(ii) The reaction is exothermic.

(iv) Mn2+ acts as an autocatalyst.

10. There are 14 elements in the actinoid series. Which of the following elements does

not belong to this series?

11. KMnO4 acts as an oxidising agent in acidic medium. The number of moles of KMnO4 that will be needed to react with one mole of sulphide ions in acidic solution is

12. Which of the following is amphoteric oxide?

13. Gadolinium belongs to 4f series. Its atomic number is 64. Which of the

following is the correct electronic configuration of gadolinium?

14. Interstitial compounds are formed when small atoms are trapped inside the

crystal lattice of metals. Which of the following is not the characteristic property

(i) They have high melting points in comparison to pure metals.

(ii) They are very hard.

(iv) They are chemically very reactive.

Option (iv) is the answer

15. The magnetic moment is associated with its spin angular momentum and

16. KMnO4 acts as an oxidising agent in alkaline medium. When alkaline KMnO4

17. Which of the following statements is not correct?

(i) Copper liberates hydrogen from acids.

(iii) Mn3+ and Co3+ are oxidising agents in aqueous solution.

(iv) Ti2+ and Cr2+ are reducing agents in aqueous solution.

18. When acidified K2Cr2O7 solution is added to Sn2+ salts then Sn2+ changes to

19. Highest oxidation state of manganese in fluoride is +4 (MnF4) but highest

(i) fluorine is more electronegative than oxygen.

(ii) fluorine does not possess d-orbitals.

(iv) in covalent compounds, fluorine can form a single bond only while oxygen

20. Although Zirconium belongs to the 4d transition series and Hafnium to 5d

transition series even then they show similar physical and chemical properties

(i) both belong to d-block.

(ii) both have the same number of electrons.

(iii) both have a similar atomic radius.

(iv) both belong to the same group of the periodic table

Option (iii) is the answer

21. Why is HCl not used to make the medium acidic in oxidation reactions of

KMnO4 in an acidic medium?

(i) Both HCl and KMnO4 act as oxidising agents.

(ii) KMnO4 oxidises HCl into Cl2 which is also an oxidising agent.

(iii) KMnO4 is a weaker oxidising agent than HCl.

(iv) KMnO4 acts as a reducing agent in the presence of HCl.

22. Generally, transition elements and their salts are coloured due to the presence

of unpaired electrons in metal ions. Which of the following compounds are

23. Transition elements show a magnetic moment due to spin and orbital motion

of electrons. Which of the following metallic ions have almost the same spin only

25. Which of the following actinoids show oxidation states up to +7?

of the following actinoids have one electron in 6d orbital?

27. Which of the following lanthanoids show +2 oxidation state besides the

28. Which of the following ions show higher spin only magnetic moment value?

29. Transition elements form binary compounds with halogens. Which of the

30. Which of the following will not act as oxidising agents?

31. Although +3 is the characteristic oxidation state for lanthanoids but cerium

(i) it has variable ionisation enthalpy

(ii) it tends to attain the noble gas configuration

32. Why does copper not replace hydrogen from acids?

A positive reduction potential means the reduced form of Cu is more stable than hydrogen. Thus, Cu is less reactive than hydrogen and cannot displace it from acids.

33. Why E° values for Mn, Ni and Zn are more negative than expected?

Mn2+(3d5) and Zn2+(3d10) have half-filled and filled d orbitals which give them stability and therefore prefer to stay that way and not get reduced. As for Ni2+(3d8), it has very high negative hydration enthalpy which gets balanced by first and second ionization enthalpy.

34. Why first ionisation enthalpy of Cr is lower than that of Zn?

First ionisation enthalpy of Cr is lower than that of Zn. If we see the electronic configuration of Cr and Zn

36. When Cu2+ ion is treated with KI, a white precipitate is formed. Explain the reaction with the help of the chemical equation.

CuCl2 is more stable because Cu2+ has a higher electron density than Cu+. Cu2+ is smaller in size, has higher effective nuclear charge and therefore a higher hydration enthalpy ∆hyd of Cu2+, which makes it more stable.

38. When a brown compound of manganese (A) is treated with HCl it gives a gas (B). The gas taken in excess reacts with NH3 to give an explosive compound (C). Identify compounds A, B and C.

When brown co pound of manganese (A) is treated with HCl it gives chlorine gas.

The chlorine gas reacts with NH3 to given NCl3

The brown compound A = MnO2

39. Although fluorine is more electronegative than oxygen, the ability of oxygen to stabilise higher oxidation states exceeds that of fluorine. Why?

41. Ionisation enthalpies of Ce, Pr and Nd are higher than Th, Pa and U. Why?

42. Although Zr belongs to 4d and Hf belongs to 5d transition series but it is quite difficult to separate them. Why?

Due to the lanthanoid contraction poor f, orbital shielding leads to an increase in effective nuclear charge, which reduces the size of Hf. So the atomic radii of both Zr and Hf are similar which means they have similar physical and chemical properties and hence separation becomes difficult.

44. Explain why the colour of KMnO4 disappears when oxalic acid is added to its solution in acidic medium.

This is a redox titration. The deep purple colour of KMnO4 disappears due to the formation of MnSO4.

When Cr2O72–is treated with an alkali:

When the yellow solution is treated with an acid, we get back the orange solution:

46. A solution of KMnO4 on reduction yields either colourless solution or a brown precipitate or a green solution depending on the pH of the solution. What different stages of the reduction do these represent and how are they carried out?

In acidic medium, permanganate changes to manganous ion which is colourless.

In alkaline medium, permanganate changes to manganate, which is a green solution

In a neutral medium, permanganate changes to manganese dioxide which is a brown precipitate,

47. The second and third rows of transition elements resemble each other much more than they resemble the first row. Explain why?

Due to poor f orbital shielding, effective nuclear charge increases and there is a contraction in the size of the third-row elements. This contraction in size is called Lanthanide contraction. The second and third row of transition elements have similar atomic radii and therefore they resemble each other more.

49. The halides of transition elements become more covalent with increasing oxidation state of the metal. Why?

50. While filling up of electrons in the atomic orbitals, the 4s orbital is filled before the 3d orbital but the reverse happens during the ionisation of the atom. Explain why?

Electrons are filled according to the n+l rule. If an orbital has lower n+l value, then the electron will enter that orbital.

So, the electron will first enter 4s and then 3d while filling. But, 4s electrons are held loose by the nucleus and are outside of 3d, so removing a 4s electron becomes easier than removing a 3d electron.

Effective nuclear charge increases as we move along the period from left to right. Due to the reason, the size also reduces. Therefore the electrons will be held more tightly and so that removing of the electron will be difficult from the outermost shell. So that ionization enthalpy also increases. Therefore, reactivity also decreases. Sc is more reactive than Cu.

BYJU’S is India’s top online education providers which use highly efficient interactive way of learning. BYJU’S provides notes, study materials, NCERT Solutions, previous year question papers, sample papers, videos and animations that help you not only in understanding the topic but also help you in remembering the concepts for a very long time.