NCERT Class 12 Chemistry Exemplar for Chapter 5 Surface chemistry provided by BYJU’S with comprehensive solutions to exemplar in NCERT Class 12 chemistry book along with extra questions and numerical problems prepared by Chemistry teachers at BYJU’S. Solving the exemplar questions will help the students to learn the basic and higher-level concepts related to that chapter. CBSE Class 12 is very important for a student. The marks scored in Class 12 is used to get admission in college. To score good marks in Class 12 CBSE exam students are advised to solve the exemplar questions. 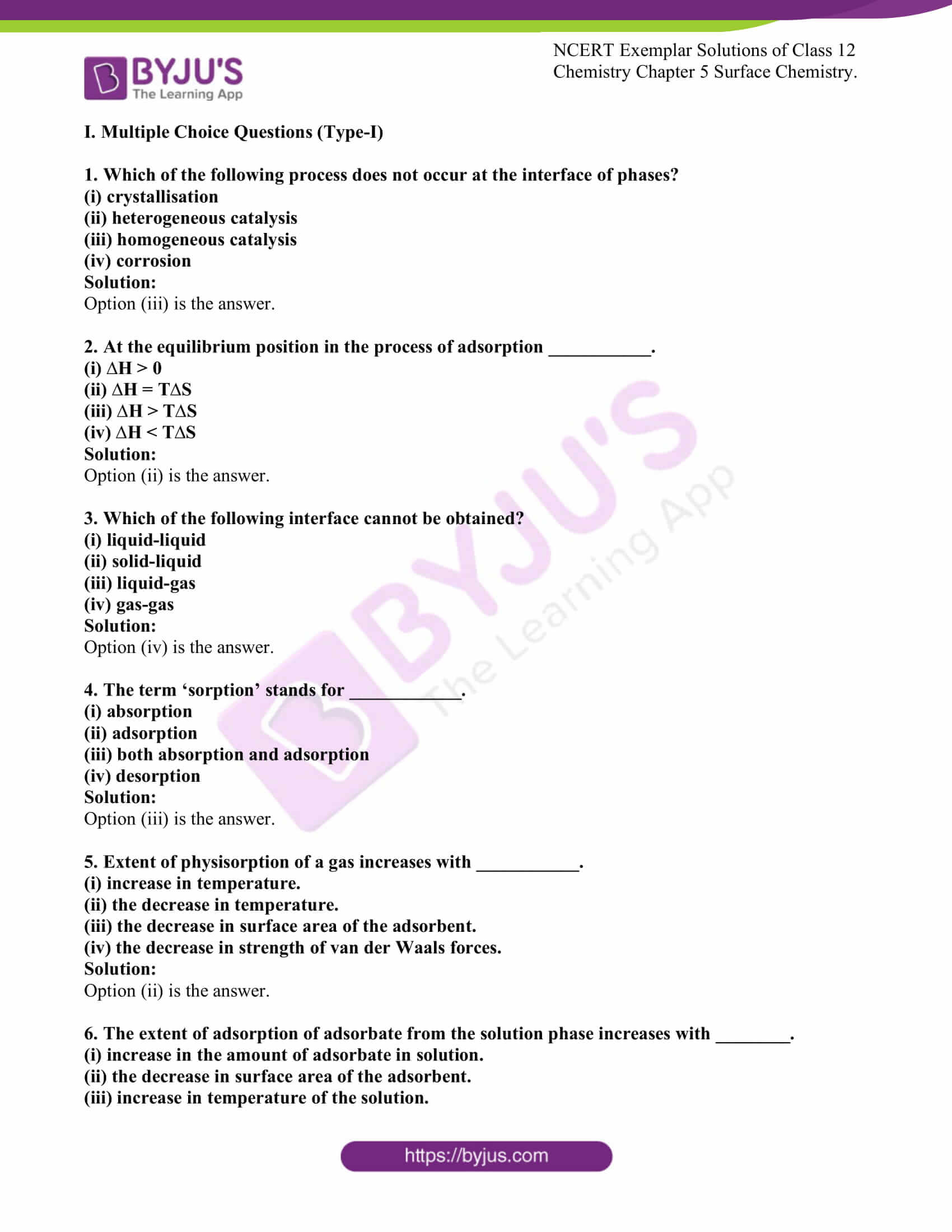 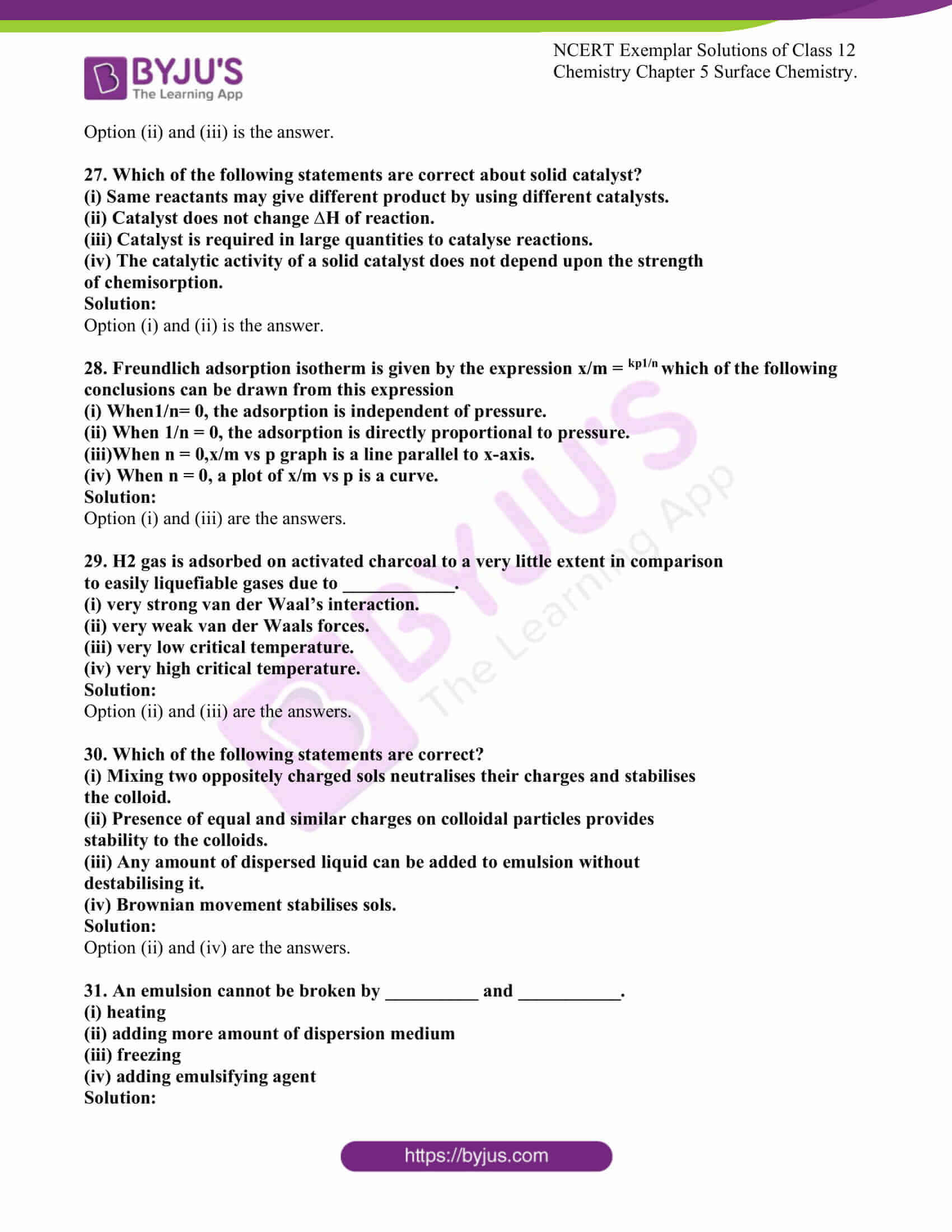 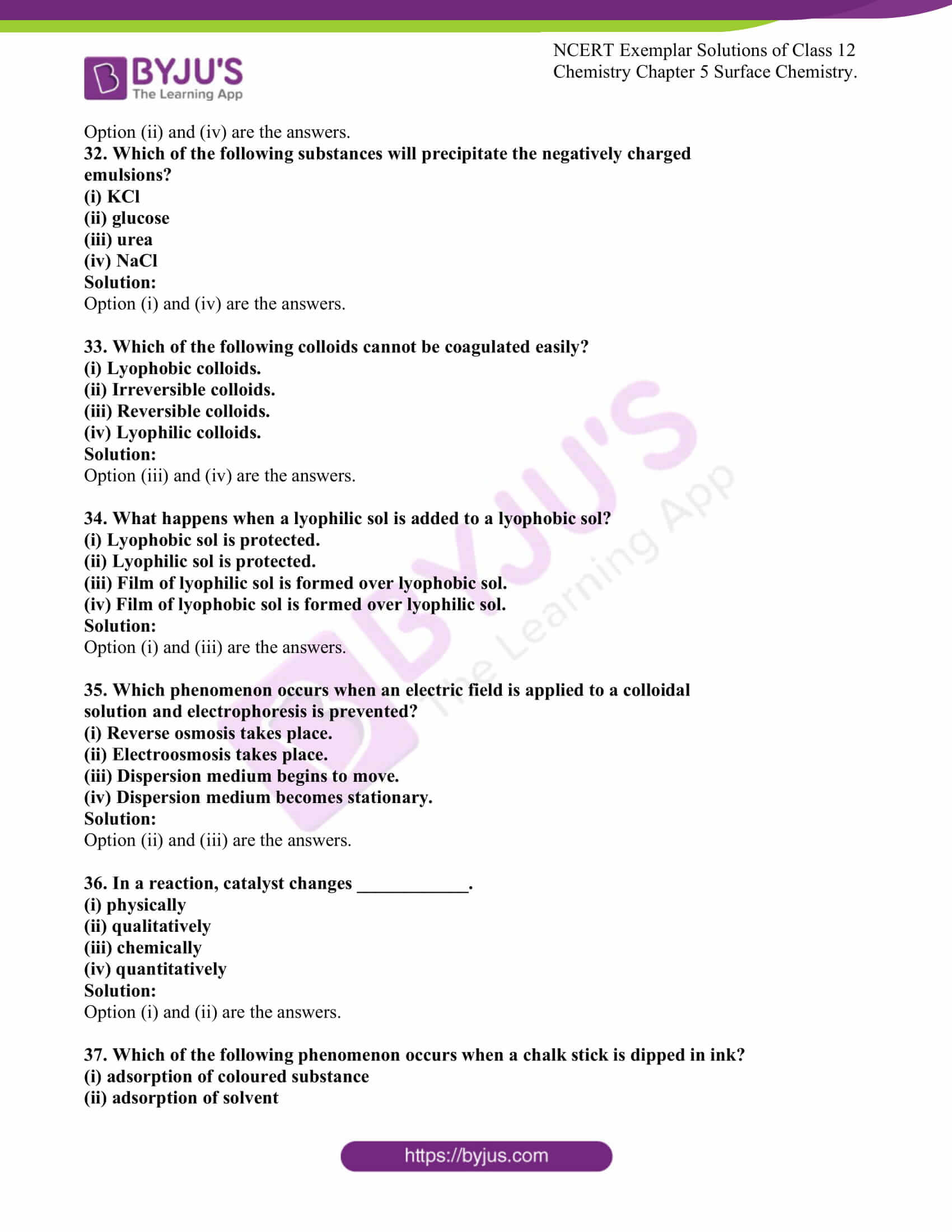 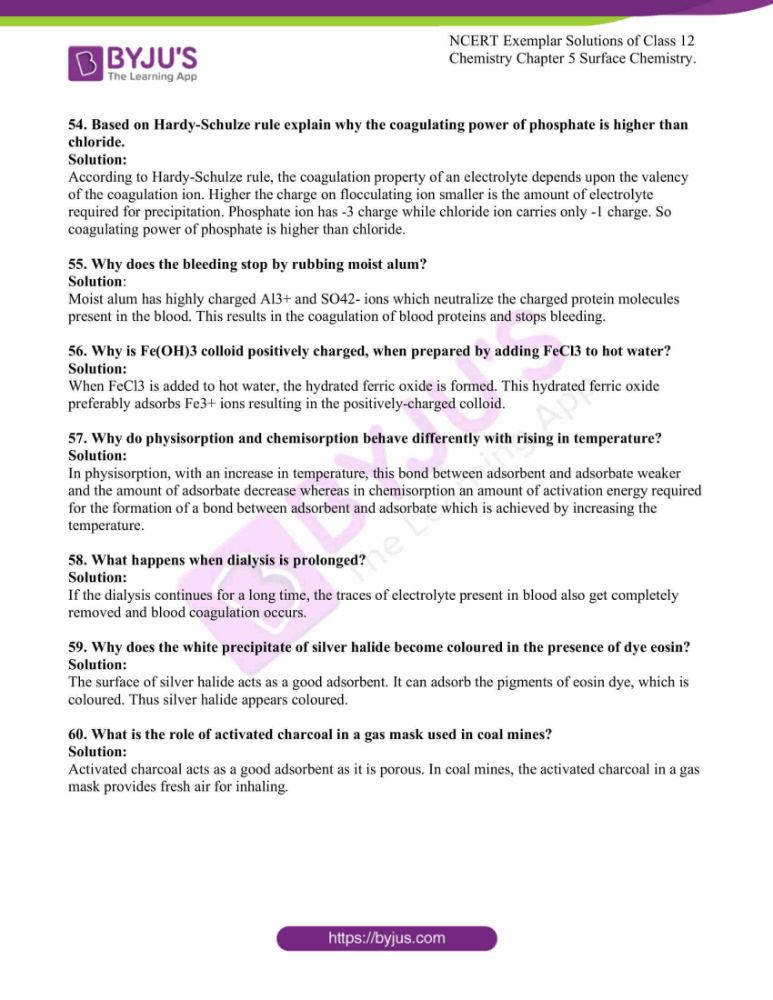 1. Which of the following process does not occur at the interface of phases?

3. Which of the following interface cannot be obtained?

(iii) both absorption and adsorption

(i) increase in temperature.

(ii) the decrease in temperature.

(iii) the decrease in surface area of the adsorbent.

(iv) the decrease in strength of van der Waals forces.

6. The extent of adsorption of adsorbate from the solution phase increases with ________.

(i) increase in the amount of adsorbate in solution.

(ii) the decrease in surface area of the adsorbent.

(iii) increase in temperature of the solution.

(iv) the decrease in the amount of adsorbate in solution

7. Which one of the following is not applicable to the phenomenon of adsorption?

8. Which of the following is not a favourable condition for physical adsorption?

(i) decrease in temperature

(iii) increase in surface area of the adsorbent

(iv) the decrease in surface area of the adsorbent

10. In physisorption adsorbent does not show specificity for any particular gas

(iii) enthalpy of adsorption is low.

(iv) it is a reversible process.

11. Which of the following is an example of absorption?

(i) Water on silica gel

(iv) Oxygen on the metal surface

12. Based on data given below to predict which of the following gases shows

the least adsorption on a definite amount of charcoal?

13. In which of the following reactions heterogeneous catalysis is involved?

15. Which of the following will show the Tyndall effect?

(i) An aqueous solution of soap below critical micelle concentration.

(ii) An aqueous solution of soap above critical micelle concentration.

(iv) An aqueous solution of sugar.

16. The method by which lyophobic sol can be protected.

(i) By the addition of oppositely charged sol.

(ii) By the addition of an electrolyte.

(iii) By the addition of lyophilic sol.

17. Freshly prepared precipitate sometimes gets converted to colloidal solution by

18. Which of the following electrolytes will have maximum coagulating value for

19. A colloidal system having a solid substance as a dispersed phase and a liquid

20. The values of colligative properties of the colloidal solution are of small order in

comparison to those shown by true solutions of same concentration because

(i) exhibit an enormous surface area.

(iv) are comparatively less in number

21. Arrange the following diagrams in the correct sequence of steps involved in the

mechanism of catalysis, in accordance with modern adsorption theory. 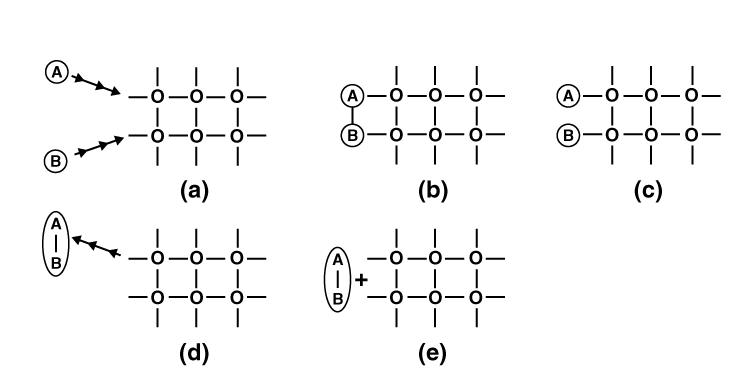 22. Which of the following process is responsible for the formation of the delta at a

a place where rivers meet the sea?

23. Which of the following curves is in accordance with Freundlich adsorption 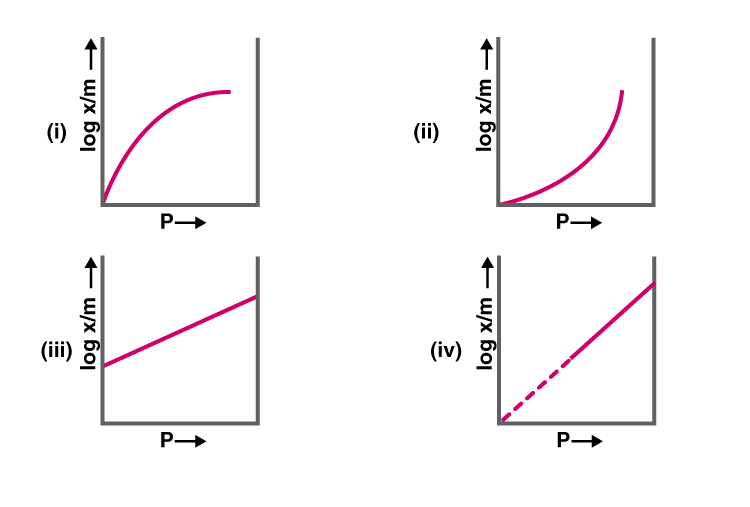 24. Which of the following process is not responsible for the presence of electric charge on the sol particles?

(ii)Adsorption of ionic species from solution.

25. Which of the following phenomenon applies to the process shown in Fig. 5.1? 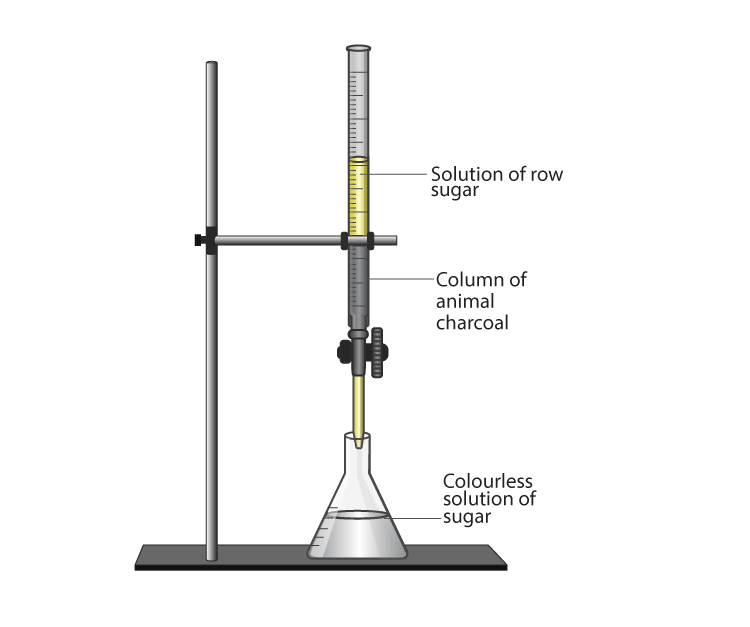 26. Which of the following option are correct?

(iii) On dilution of soap, solution micelles may revert to individual ions.

(iv) Soap solution behaves like a normal strong electrolyte at all

27. Which of the following statements are correct about solid catalyst?

(i) Same reactants may give different product by using different catalysts.

(ii) Catalyst does not change ∆H of reaction.

(iii) Catalyst is required in large quantities to catalyse reactions.

28. Freundlich adsorption isotherm is given by the expression x/m = kp1/n which of the following conclusions can be drawn from this expression

(i) When1/n= 0, the adsorption is independent of pressure.

(ii) When 1/n = 0, the adsorption is directly proportional to pressure.

29. H2 gas is adsorbed on activated charcoal to a very little extent in comparison

30. Which of the following statements are correct?

stability to the colloids.

32. Which of the following substances will precipitate the negatively charged

33. Which of the following colloids cannot be coagulated easily?

34. What happens when a lyophilic sol is added to a lyophobic sol?

(i) Lyophobic sol is protected.

(iii) Film of lyophilic sol is formed over lyophobic sol.

(iv) Film of lyophobic sol is formed over lyophilic sol.

35. Which phenomenon occurs when an electric field is applied to a colloidal

solution and electrophoresis is prevented?

37. Which of the following phenomenon occurs when a chalk stick is dipped in ink?

(i) adsorption of coloured substance

(iii) absorption and adsorption both of solvent

38. Why is it important to have a clean surface in surface studies?

In the adsorption process, the surface of adsorbent adsorbs the desired gases. If the surface is already occupied by some other gases, it becomes saturated and thus cannot adsorb desired gases

39. Why is chemisorption referred to as activated adsorption?

Chemisorption involves chemical bond formation which requires activation energy. That is why it is referred to as activated adsorption

40. What type of solutions are formed on dissolving different concentrations of soap in the water?

41. What happens when gelatin is mixed with gold sol?

When gelatin is mixed with gold sol, gelatin forms a protective layer on gold sol, thus preventing coagulation. So gold sol becomes stabilized by adding gelatin, which is a lyophilic sol.

42. How does it become possible to cause artificial rain by spraying silver iodide on the clouds?

Clouds carry a charge as they are colloids. Silver iodide AgI being an electrolyte helps in coagulation process between colloidal particles of water in the cloud. Thus it forms bigger raindrops causing artificial rain. AgI is usually sprayed from an aeroplane or remote-controlled rockets.

43. Gelatin which is a peptide is added in icecreams. What can be its role?

Gelatin acts as an emulsifying agent which is a hydrophilic colloid. They absorb the water content in the ice-cream and also a good source of protein. They also give a soft texture and shiny appearance to ice-cream.

Collodion is a 4% solution of nitrocellulose prepared in a mixture of alcohol and ether. it is the flammable and syrupy solution.

Alum is KAl(SO4)2 which is called potassium aluminium sulphate. when added react with alkaline bicarbonates and forms a gelatinous precipitate. When it is added to water they attract the colloidal particles and settles down at the bottom of the container.

46. What happens when the electric field is applied to a colloidal solution?

When an electric field is applied to a colloidal solution, colloidal particles move towards different electrode depending on their respective charge.

Brownian motion is due to the collision between the colloidal particles and with the dispersion medium. The movement results in the stabilisation of the colloidal solution.

48. A colloid is formed by adding FeCl3 in excess of hot water. What will happen if excess sodium chloride is added to this colloid?

FeCl3 when added into hot water, it forms hydrated ferric oxide, which is a positively charged sol due to absorption of Fe3+ ions. On adding NaCl the negatively charged chloride ions neutralize the positive charge of the solution and coagulation of the sol takes place.

49. How do emulsifying agents stabilise the emulsion?

Emulsifying agents stabilize the emulsion by forming an interfacial film between suspended particle and dispersion medium. For example, agar is an emulsifying agent used in food.

50. Why are some medicines more effective in the colloidal form?

The colloidal solution has a larger surface area than a true solution. The surface area is directly proportional to the rate of assimilation in our body. So most of the medicines act more effective in colloidal form.

51. Why does leather get hardened after tanning?

When leather is soaked in tannin, coagulation takes place due to the interaction of positively charged animal skin and negatively charged tannin. Thus leather gets hardened.

52. How does the precipitation of colloidal smoke take place in Cottrell precipitator?

Cottrell precipitator is a filtration device that removes the fine particles like dust and smoke from a flowing gas. It neutralizes the charge on carbon particles.

53. How will you distinguish between the dispersed phase and dispersion medium in an emulsion?

An emulsion is a dispersion of one liquid in another immiscible liquid. The dispersed phase is always present in fewer amounts than the dispersion medium.

54. Based on Hardy-Schulze rule explain why the coagulating power of phosphate is higher than chloride.

According to Hardy-Schulze rule, the coagulation property of an electrolyte depends upon the valency of the coagulation ion. Higher the charge on flocculating ion smaller is the amount of electrolyte required for precipitation. Phosphate ion has -3 charge while chloride ion carries only -1 charge. So coagulating power of phosphate is higher than chloride.

55. Why does the bleeding stop by rubbing moist alum?

Moist alum has highly charged Al3+ and SO42- ions which neutralize the charged protein molecules present in the blood. This results in the coagulation of blood proteins and stops bleeding.

56. Why is Fe(OH)3 colloid positively charged, when prepared by adding FeCl3 to hot water?

57. Why do physisorption and chemisorption behave differently with rising in temperature?

58. What happens when dialysis is prolonged?

If the dialysis continues for a long time, the traces of electrolyte present in blood also get completely removed and blood coagulation occurs.

59. Why does the white precipitate of silver halide become coloured in the presence of dye eosin?

60. What is the role of activated charcoal in a gas mask used in coal mines?

After studying this NCERT Class 12 Chemistry exemplar for chapter 5 pdf you will be able to understand the topic completely from the exam point of view and you can access surface chemistry Class 12 NCERT notes which comes handy during the time of examination.

This solution has MCQs, match the following, fill in the blanks, true or false and numerical problems questions which are very important for the preparation of JEE, State board entrance exams, NEET, AIPMT etc. To help students we have provided the NCERT exemplar Class 12 Chapter 5 surface chemistry.

BYJU’S is India’s largest k-12 learning app with top-grade teachers from across the nation with excellent teaching skills. Refer and download notes, question papers for various other subjects like Mathematics, Biology, Chemistry and many competitive exams as well. Enjoy learning with a great experience. Stay tuned to know more about NCERT Solutions and preparation tips.