NCERT Class 12 Chemistry exemplar for Chapter 2 Solutions helps you focus on fundamentals to help students with basic concepts. This will make you understand the chapter 2 solutions thoroughly thereby assist you in scoring high marks in Class 12 board examination and graduate entrance examinations.

NCERT Class 12 Chemistry exemplar for chapter 2 pdf is an important study material that provides you with exemplar questions and problems given in NCERT Exemplar book. Along with NCERT questions, this pdf has several extra questions prepared by experts at BYJU’S. This solution has MCQs, fill in the blanks, match the following, exercises, assignments and numerical problems that help your exam preparation. 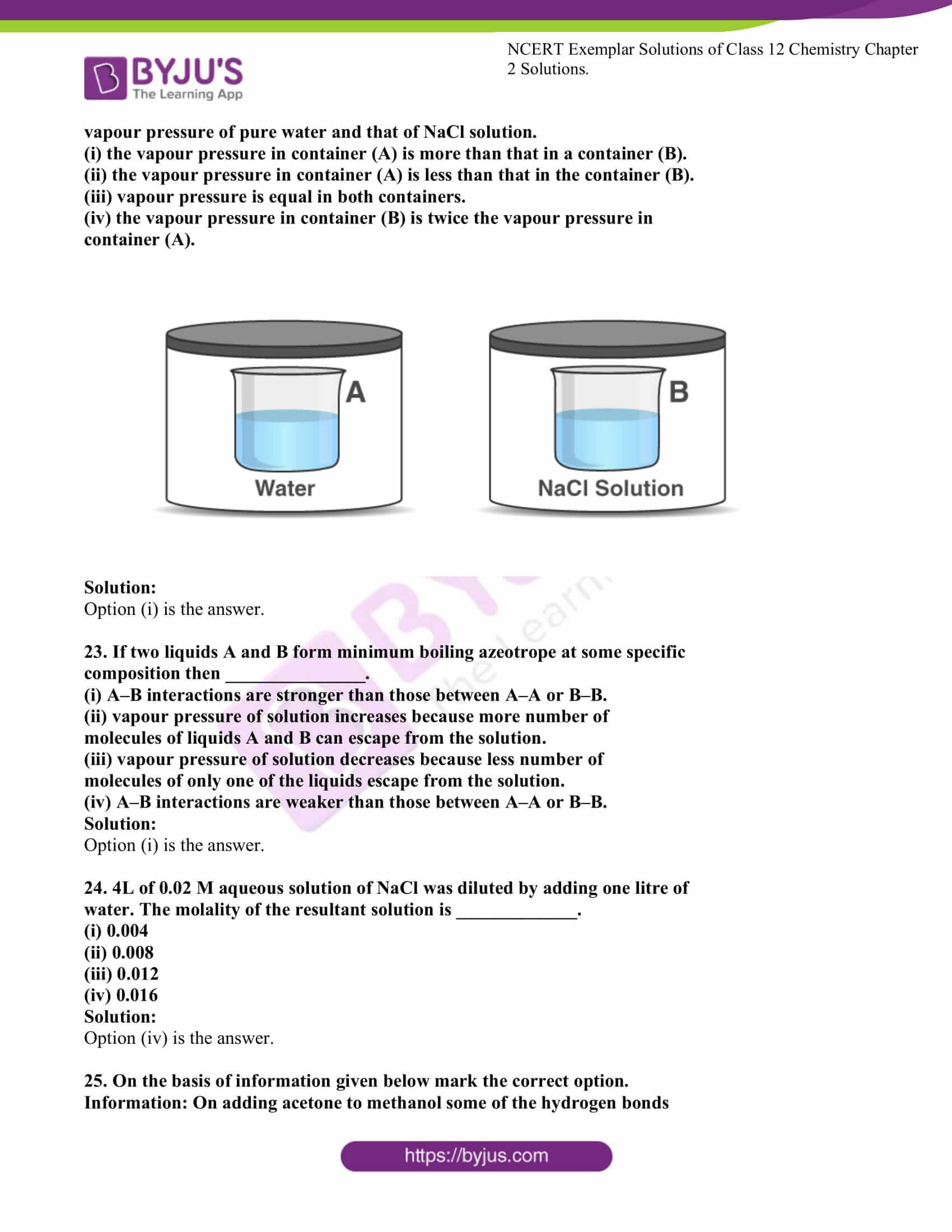 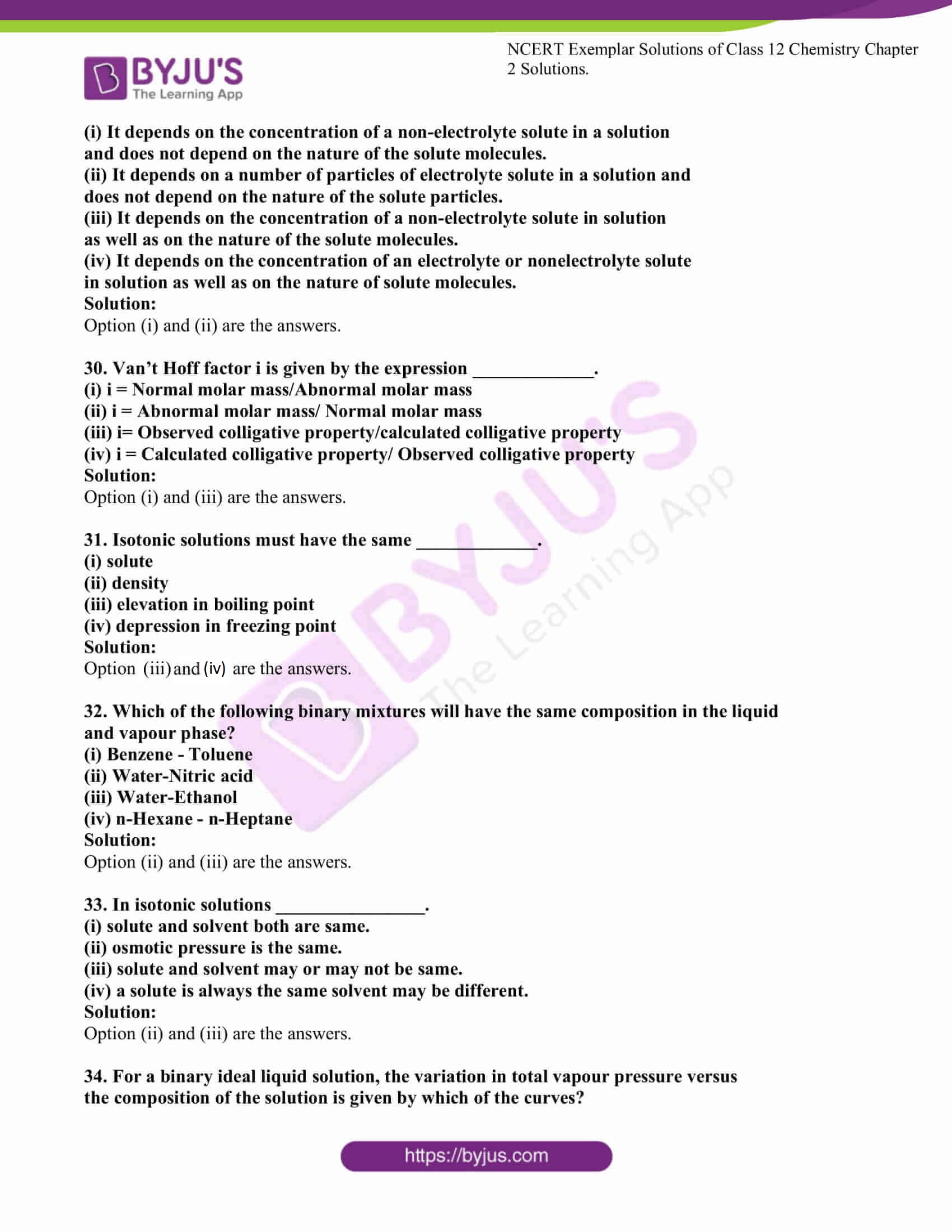 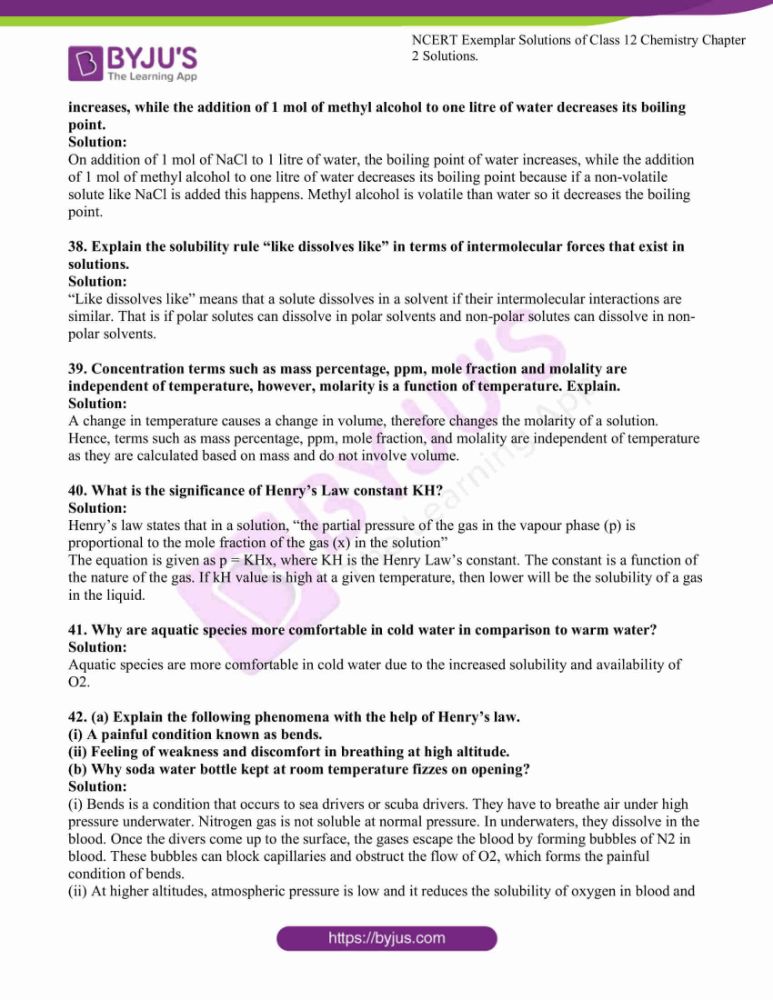 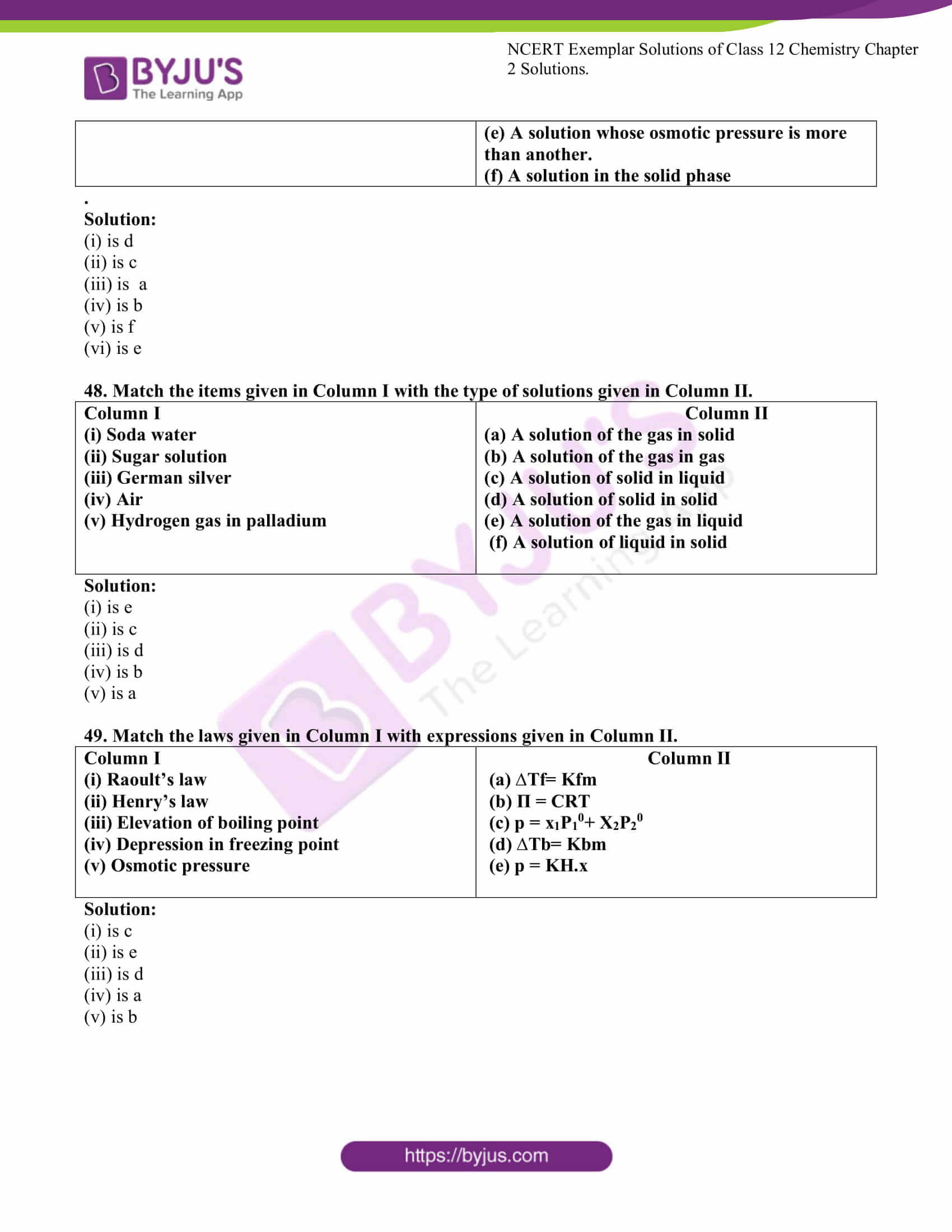 1. Which of the following units is useful in relating the concentration of a solution

with its vapour pressure?

2. On dissolving sugar in water at room temperature solution feels cool to touch.

Under which of the following cases dissolution of sugar will be most rapid?

(i) Sugar crystals in cold water.

3. At equilibrium the rate of dissolution of a solid solute in a volatile liquid solvent

(i) less than the rate of crystallisation

(ii) greater than the rate of crystallisation

(iii) equal to the rate of crystallisation

takes place when a small amount of ‘A’ is added to the solution. The solution is

5. The maximum amount of a solid solute that can be dissolved in a specified amount

6. Low concentration of oxygen in the blood and tissues of people living at high

7. Considering the formation, breaking and strength of hydrogen bond, predict

(i) Methanol and acetone.

(i) the nature of the solute particles dissolved in solution.

(ii) the number of solute particles in solution.

(iii) the physical properties of the solute particles dissolved in solution.

(iv) the nature of solvent particles.Solution:

9. Which of the following aqueous solutions should have the highest boiling point?

11. In comparison to a 0.01 M solution of glucose, the depression in freezing point

12. An unripe mango placed in a concentrated salt solution to prepare pickle,

(i) it gains water due to osmosis.

(ii) it loses water due to reverse osmosis.

(iii) it gains water due to reverse osmosis.

(iv) it loses water due to osmosis.

13. At a given temperature, osmotic pressure of a concentrated solution of a

(i) is higher than that at a dilute solution.

(ii) is lower than that of a dilute solution.

(iii) is same as that of a dilute solution.

(iv) cannot be compared with an osmotic pressure of a dilute solution.

14. Which of the following statements is false?

solvents will have the same depression in freezing point.

( where C is the molarity of the solution).

(iv) According to Raoult’s law, the vapour pressure exerted by a volatile

15. The values of Van’t Hoff factors for KCl, NaCl and K2SO4

16. Which of the following statements is false?

(ii) In reverse osmosis, solvent molecules move through a semipermeable

(iii) The value of molal depression constant depends on the nature of the solvent.

(iv) Relative lowering of vapour pressure is a dimensionless quantity.

(i) increases with increase in temperature.

(ii) decreases with increase in temperature.

18. The value of Henry’s constant KH

(i) greater for gases with higher solubility.

(iii) constant for all gases.

(iv) not related to the solubility of gases.

(i) water will move from the side (A) to side (B) if a pressure lower than the osmotic pressure is applied on piston (B).

(ii) water will move from the side (B) to side (A) if a pressure greater than the osmotic pressure is applied on piston (B).

(iii) water will move from the side (B) to side (A) if a pressure equal to osmotic pressure is applied on piston (B). factor for these solutions will be in the order______.

21. On the basis of information given below mark the correct option.

of A–A and B–B type are nearly the same as A–B type interactions.

(iii) Solution (B) will show a negative deviation from Raoult’s law.

containers of the same material and same

At a given temperature, which of the following statement is correct about the

vapour pressure of pure water and that of NaCl solution.

(i) the vapour pressure in container (A) is more than that in a container (B).

(ii) the vapour pressure in container (A) is less than that in the container (B).

(iii) vapour pressure is equal in both containers.

23. If two liquids A and B form minimum boiling azeotrope at some specific

(i) A–B interactions are stronger than those between A–A or B–B.

(ii) vapour pressure of solution increases because more number of

molecules of liquids A and B can escape from the solution.

(iii) vapour pressure of solution decreases because less number of

molecules of only one of the liquids escape from the solution.

(iv) A–B interactions are weaker than those between A–A or B–B.

25. On the basis of information given below mark the correct option.

Information: On adding acetone to methanol some of the hydrogen bonds

(i) At specific composition, methanol-acetone mixture will form minimum

boiling azeotrope and will show positive deviation from Raoult’s law.

boiling azeotrope and will show positive deviation from Raoult’s law.

boiling azeotrope and will show negative deviation from Raoult’s law.

boiling azeotrope and will show negative deviation from Raoult’s law.

and 0.413 respectively. Arrange these gases in the order of their increasing solubility.

27. Which of the following factor (s) affect the solubility of a gaseous solute in the

a fixed volume of liquid solvent?

(a) nature of solute (b) temperature (c) pressure

28. Intermolecular forces between two benzene molecules are near to same

strength as those between two toluene molecules. For a mixture of benzene

and toluene, which of the following are not true?

(iii) These will form a minimum boiling azeotrope.

(iv) These will not form the ideal solution.

29. Relative lowering of vapour pressure is a colligative property because

and does not depend on the nature of the solute molecules.

does not depend on the nature of the solute particles.

as well as on the nature of the solute molecules.

in solution as well as on the nature of solute molecules.

32. Which of the following binary mixtures will have the same composition in the liquid

(i) solute and solvent both are same.

(ii) osmotic pressure is the same.

(iii) solute and solvent may or may not be same.

(iv) a solute is always the same solvent may be different.

34. For a binary ideal liquid solution, the variation in total vapour pressure versus

the composition of the solution is given by which of the curves? 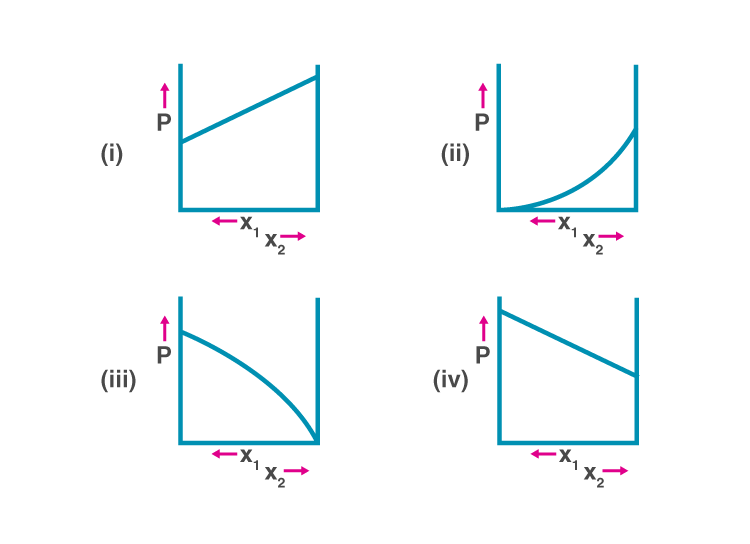 (i) a non-volatile solid is dissolved in a volatile liquid.

(iii) a gas is dissolved in non-volatile liquid.

36. Components of a binary mixture of two liquids A and B were being separated by distillation. After some time separation of components stopped and the composition of the vapour phase became the same as that of a liquid phase. Both the components started coming in the distillate. Explain why this happened.

Both the components started coming in the distillate and the vapour and liquid phase will have the same composition. This shows an azeotropic mixture. Therefore it can’t be separated by distillation.

39. Concentration terms such as mass percentage, ppm, mole fraction and molality are independent of temperature, however, molarity is a function of temperature. Explain.

A change in temperature causes a change in volume, therefore changes the molarity of a solution. Hence, terms such as mass percentage, ppm, mole fraction, and molality are independent of temperature as they are calculated based on mass and do not involve volume.

40. What is the significance of Henry’s Law constant KH?

Henry’s law states that in a solution, “the partial pressure of the gas in the vapour phase (p) is proportional to the mole fraction of the gas (x) in the solution”

The equation is given as p = KHx, where KH is the Henry Law’s constant. The constant is a function of the nature of the gas. If kH value is high at a given temperature, then lower will be the solubility of a gas in the liquid.

41. Why are aquatic species more comfortable in cold water in comparison to warm water?

Aquatic species are more comfortable in cold water due to the increased solubility and availability of O2.

42. (a) Explain the following phenomena with the help of Henry’s law.

(i) A painful condition known as bends.

(ii) Feeling of weakness and discomfort in breathing at high altitude.

(b) Why soda water bottle kept at room temperature fizzes on opening?

(i) Bends is a condition that occurs to sea drivers or scuba drivers. They have to breathe air under high pressure underwater. Nitrogen gas is not soluble at normal pressure. In underwaters, they dissolve in the blood. Once the divers come up to the surface, the gases escape the blood by forming bubbles of N2 in blood. These bubbles can block capillaries and obstruct the flow of O2, which forms the painful condition of bends.

(ii) At higher altitudes, atmospheric pressure is low and it reduces the solubility of oxygen in blood and tissues of people travelling or living at high altitudes. The lack of oxygen causes weakness and unable to think properly, a condition known as anoxia.

(iii) When a soda water bottle is opened at room temperature and normal pressure conditions, the pressure inside the bottle reduces and solubility of CO2 reduces, thus causing the gas bubbles to escape and soda water fizzing.

43. Why is the vapour pressure of an aqueous solution of glucose lower than that of water?

44. How does sprinkling of salt help in clearing the snow-covered roads in hilly areas? Explain the phenomenon involved in the process.

45. What is a “semi-permeable membrane”?

46. Give an example of a material used for making semipermeable membrane for carrying out reverse osmosis.

Examples of materials used for the semipermeable membrane include cellulose acetate and polyamides.

Note: In the following questions match the items given in Column I and

46. Match the items given in Column I and Column II.

The chapter solution is about learning the formation of different types of solutions, Henry’s law and Raoult’s law, difference between non-ideal and ideal solutions. In CBSE board examination questions are always asked from this chapter. To understand the concepts of this chapter students are advised to solve the NCERT exemplar Class 12 chemistry chapter 2 solutions.

Visit the below link to get free PDF of exemplar questions.

BYJU’S is India’s top educational App which is revolutionizing the education sector through its interactive innovative teaching methods. BYJU’S provides comprehensive study material for CBSE Syllabus (2020-21) for all the subjects and classes.