BYJU’S brings to you 100% accurate NCERT Solutions for Class 10 English First Flight Chapter 10 that comprises one prose – “The Sermon at Benares” and one poem – “For Anne Gregory”. The NCERT Solutions of Class 10 are designed by our team of expert teachers to provide the best-in-class solutions for Class 10 students. The solutions are designed using simple English, to help students comprehend and get an extensive understanding of this unit and attempt the questions during the English exam, with utmost confidence and vigour. 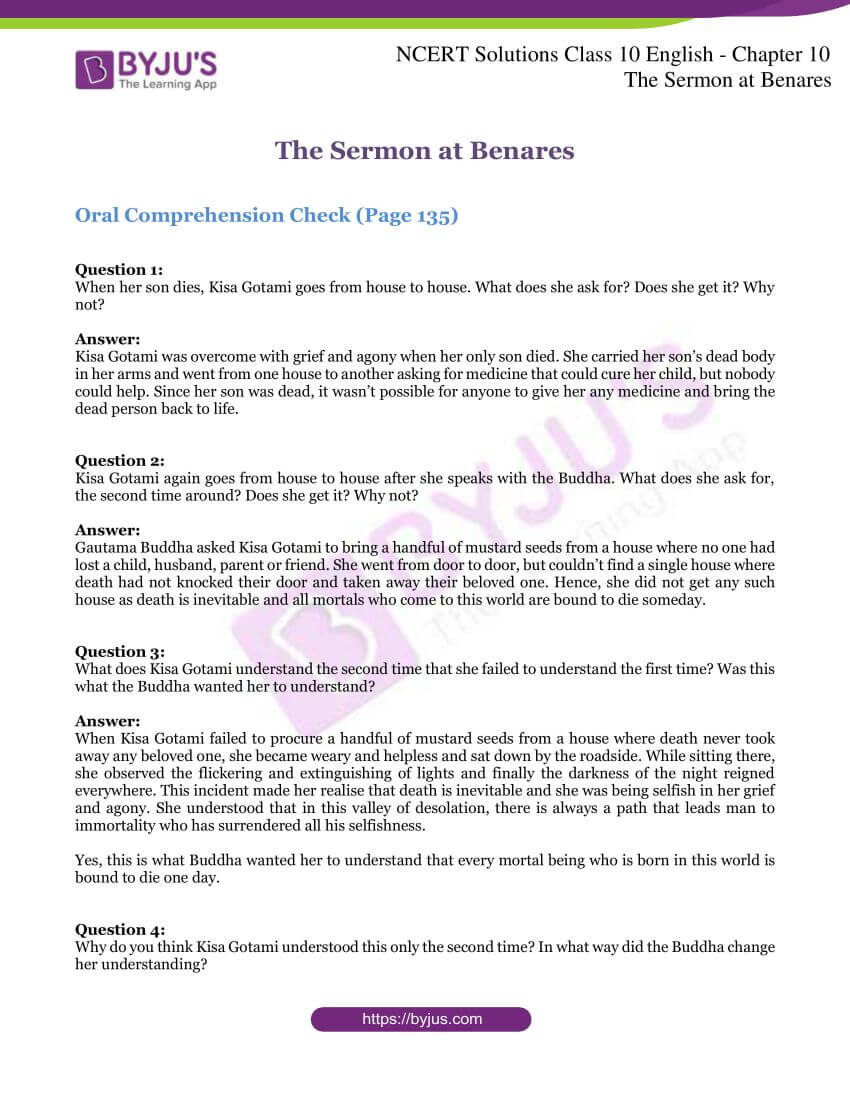 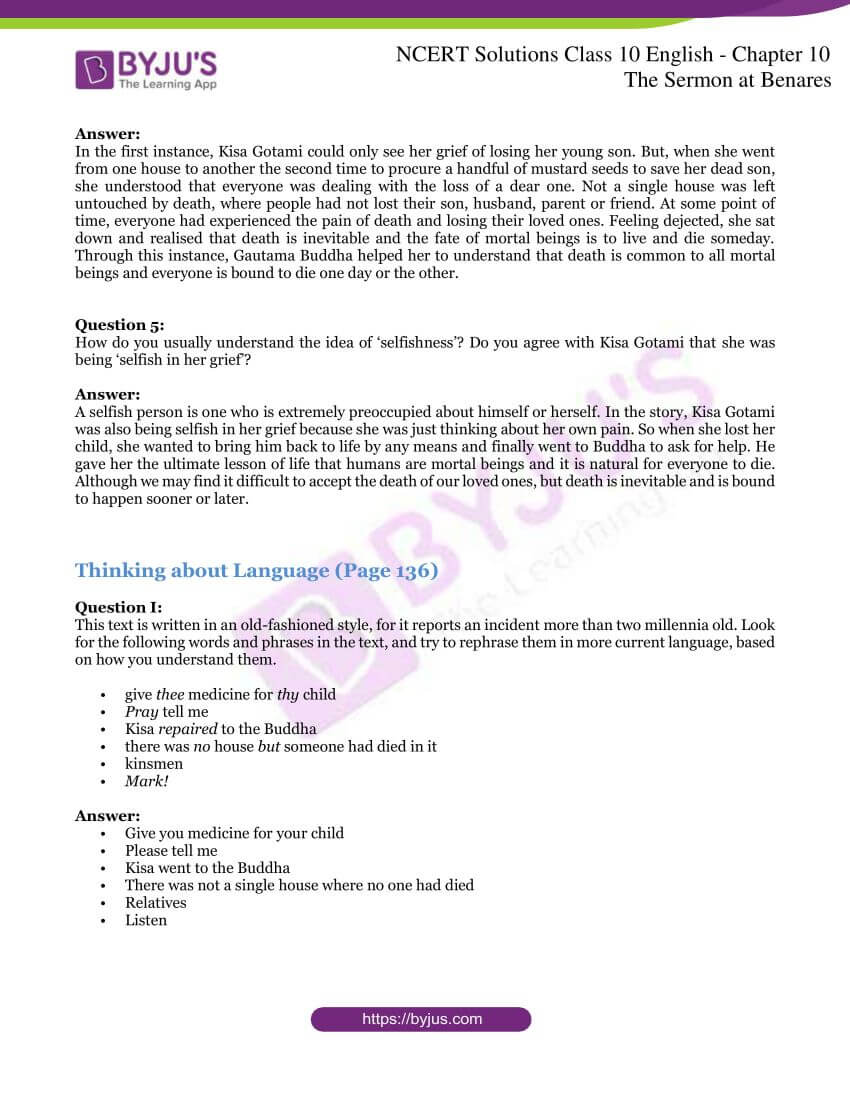 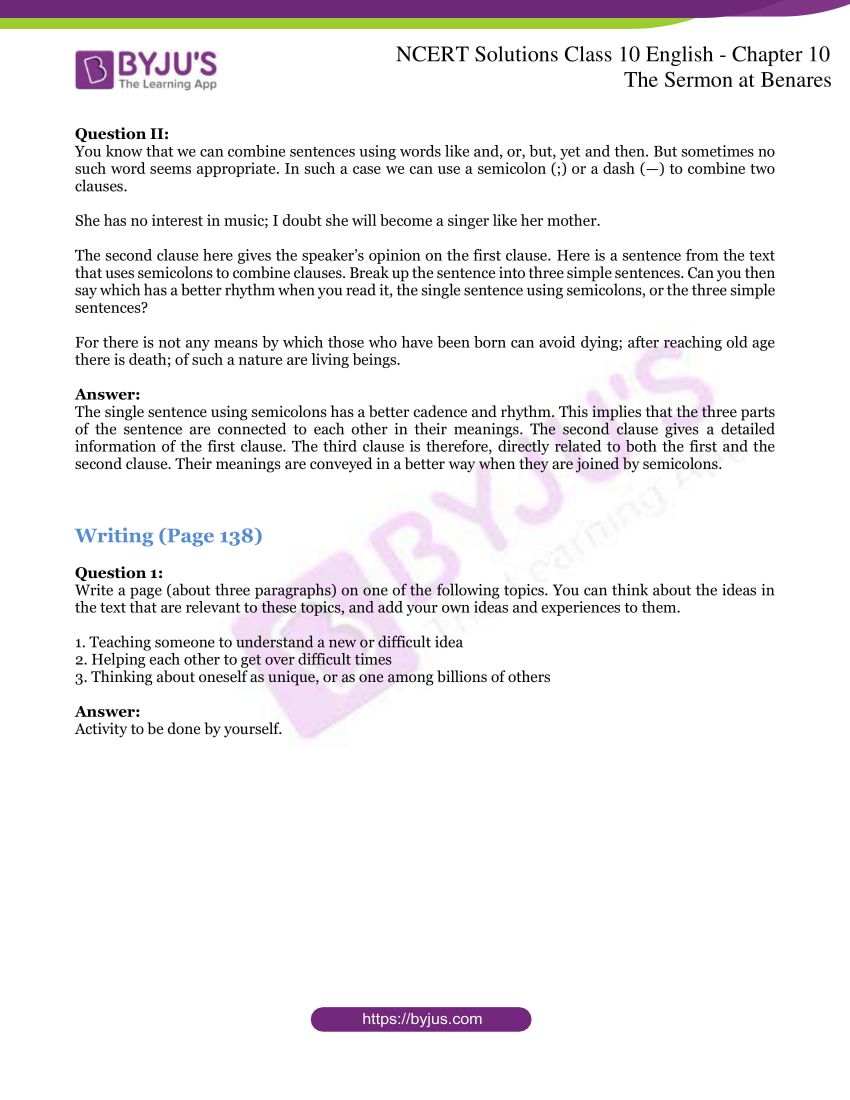 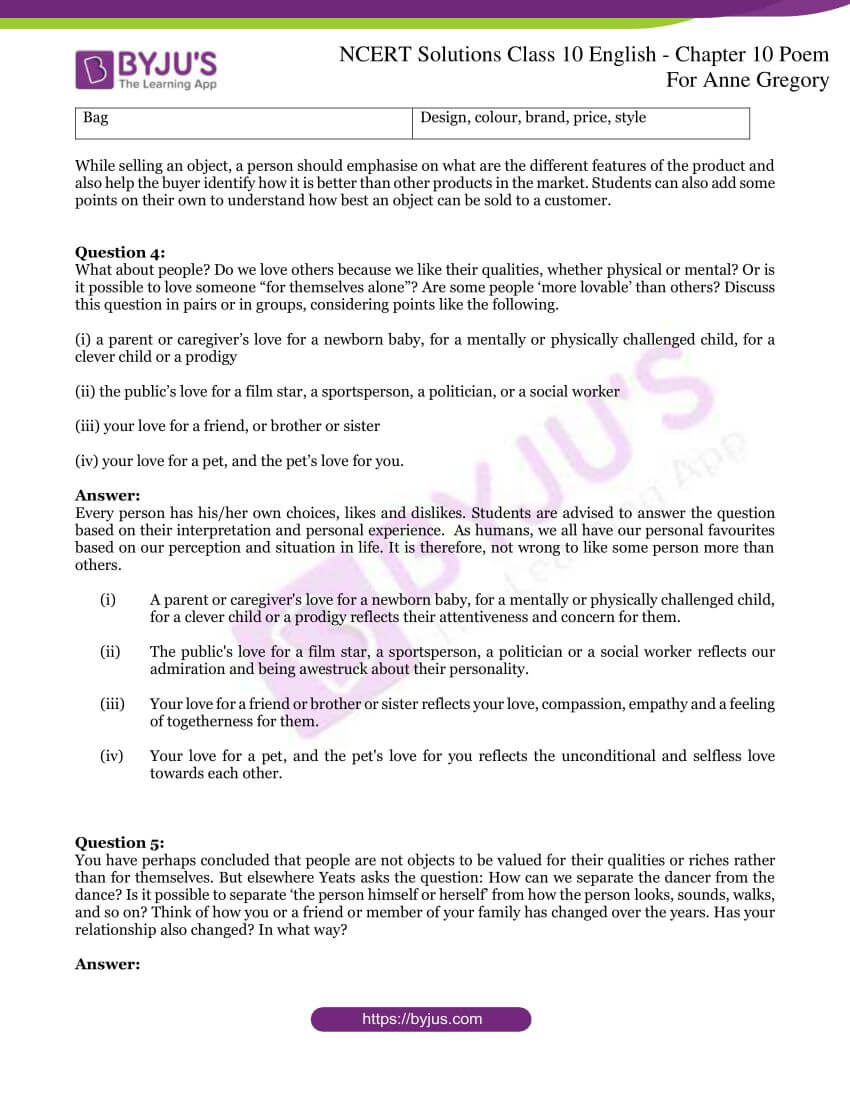 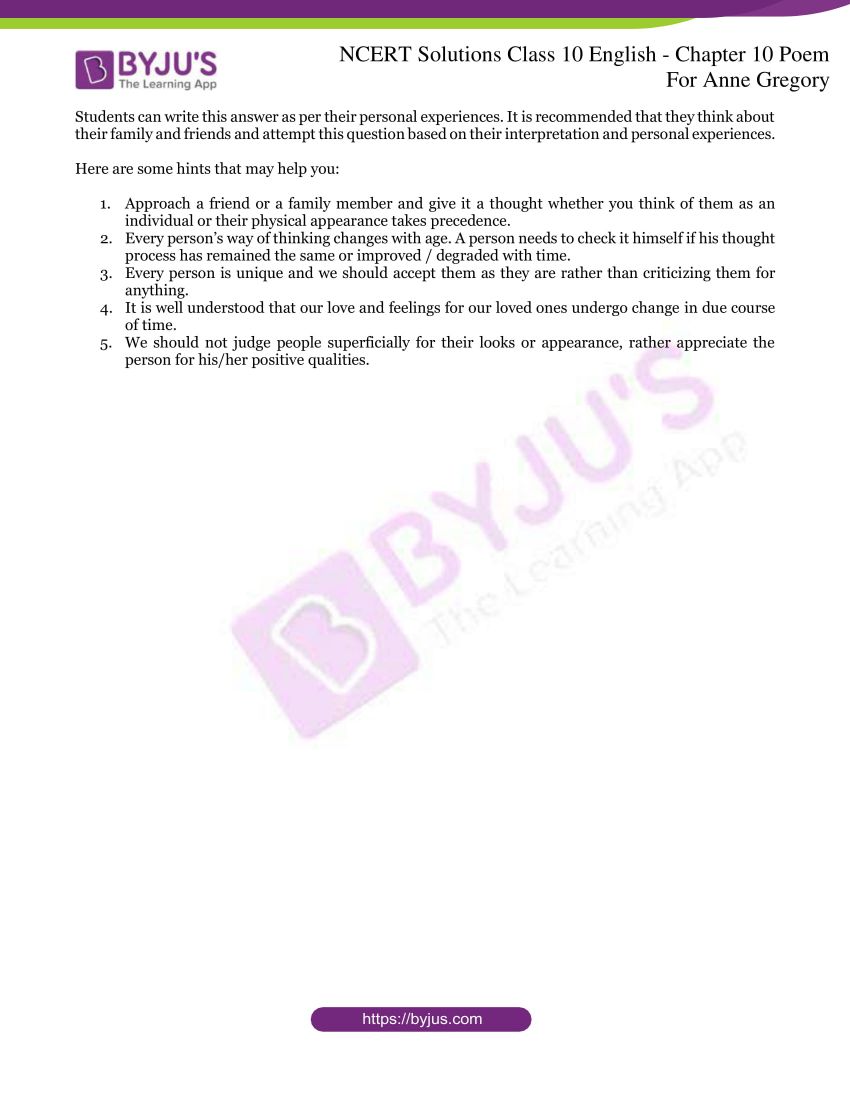 When her son dies, Kisa Gotami goes from house to house. What does she ask for? Does she get it? Why not?

Kisa Gotami was overcome with grief and agony when her only son died. She carried her son’s dead body in her arms and went from one house to another asking for medicine that could cure her child, but nobody could help. Since her son was dead, it wasn’t possible for anyone to give her any medicine and bring the dead person back to life.

Kisa Gotami again goes from house to house after she speaks with the Buddha. What does she ask for, the second time around? Does she get it? Why not?

Gautama Buddha asked Kisa Gotami to bring a handful of mustard seeds from a house where no one had lost a child, husband, parent or friend. She went from door to door, but couldn’t find a single house where death had not knocked their door and taken away their beloved one. Hence, she did not get any such house as death is inevitable and all mortals who come to this world are bound to die someday.

When Kisa Gotami failed to procure a handful of mustard seeds from a house where death never took away any beloved one, she became weary and helpless and sat down by the roadside. While sitting there, she observed the flickering and extinguishing of lights and finally the darkness of the night reigned everywhere. This incident made her realise that death is inevitable and she was being selfish in her grief and agony. She understood that in this valley of desolation, there is always a path that leads man to immortality who has surrendered all his selfishness.

Yes, this is what Buddha wanted her to understand that every mortal being who is born in this world is bound to die one day.

Why do you think Kisa Gotami understood this only the second time? In what way did the Buddha change her understanding?

In the first instance, Kisa Gotami could only see her grief of losing her young son. But, when she went from one house to another the second time to procure a handful of mustard seeds to save her dead son, she understood that everyone was dealing with the loss of a dear one. Not a single house was left untouched by death, where people had not lost their son, husband, parent or friend. At some point of time, everyone had experienced the pain of death and losing their loved ones. Feeling dejected, she sat down and realised that death is inevitable and the fate of mortal beings is to live and die someday. Through this instance, Gautama Buddha helped her to understand that death is common to all mortal beings and everyone is bound to die one day or the other.

How do you usually understand the idea of ‘selfishness’? Do you agree with Kisa Gotami that she was being ‘selfish in her grief’?

A selfish person is one who is extremely preoccupied about himself or herself. In the story, Kisa Gotami was also being selfish in her grief because she was just thinking about her own pain. So when she lost her child, she wanted to bring him back to life by any means and finally went to Buddha to ask for help. He gave her the ultimate lesson of life that humans are mortal beings and it is natural for everyone to die. Although we may find it difficult to accept the death of our loved ones, but death is inevitable and is bound to happen sooner or later.

This text is written in an old-fashioned style, for it reports an incident more than two millennia old. Look for the following words and phrases in the text, and try to rephrase them in more current language, based on how you understand them.

You know that we can combine sentences using words like and, or, but, yet and then. But sometimes no such word seems appropriate. In such a case we can use a semicolon (;) or a dash (—) to combine two clauses.

She has no interest in music; I doubt she will become a singer like her mother.

For there is not any means by which those who have been born can avoid dying; after reaching old age there is death; of such a nature are living beings.

The single sentence using semicolons has a better cadence and rhythm. This implies that the three parts of the sentence are connected to each other in their meanings. The second clause gives a detailed information of the first clause. The third clause is therefore, directly related to both the first and the second clause. Their meanings are conveyed in a better way when they are joined by semicolons.

Write a page (about three paragraphs) on one of the following topics. You can think about the ideas in the text that are relevant to these topics, and add your own ideas and experiences to them.

1. Teaching someone to understand a new or difficult idea

2. Helping each other to get over difficult times

3. Thinking about oneself as unique, or as one among billions of others

What does the young man mean by “great honey-coloured /Ramparts at your ear?” Why does he say that young men are “thrown into despair” by them?

The young man in the poem praises the “great honey-coloured hair /Ramparts at Anne’s ear” to refer to her beautiful yellow coloured hair that gracefully falls behind her ear and covers it like a wall. Her hair are so attractive that young men hopelessly fall in love with her. They are “thrown into despair” because they are enchanted by Anne’s beauty as her hair beautifully falls behind her ear. She is so pretty that everyone wants her which is not possible hence, they are all thrown into despair.

What colour is the young woman’s hair? What does she say she can change it to? Why would she want to do so?

Anne’s hair are yellow in colour just like honey. She says that she can dye it black, brown or carrot colour, which means that she can change it to any colour of her choice. She says so to express that outer beauty can be changed anytime, but that’s not real or permanent. She wants young men to look deep into her soul and wants them to love and appreciate her for her inner beauty rather than her external superficial appearance.

Objects have qualities which make them desirable to others. Can you think of some objects (a car, a phone, a dress…) and say what qualities make one object more desirable than another? Imagine you were trying to sell an object: what qualities would you emphasise?

While selling an object, a person should emphasise on what are the different features of the product and also help the buyer identify how it is better than other products in the market. Students can also add some points on their own to understand how best an object can be sold to a customer.

What about people? Do we love others because we like their qualities, whether physical or mental? Or is it possible to love someone “for themselves alone”? Are some people ‘more lovable’ than others? Discuss this question in pairs or in groups, considering points like the following.

(i) a parent or caregiver’s love for a newborn baby, for a mentally or physically challenged child, for a clever child or a prodigy

(ii) the public’s love for a film star, a sportsperson, a politician, or a social worker

(iii) your love for a friend, or brother or sister

Every person has his/her own choices, likes and dislikes. Students are advised to answer the question based on their interpretation and personal experience. As humans, we all have our personal favourites based on our perception and situation in life. It is therefore, not wrong to like some person more than others.

You have perhaps concluded that people are not objects to be valued for their qualities or riches rather than for themselves. But elsewhere Yeats asks the question: How can we separate the dancer from the dance? Is it possible to separate ‘the person himself or herself’ from how the person looks, sounds, walks, and so on? Think of how you or a friend or member of your family has changed over the years. Has your relationship also changed? In what way?

Here are some hints that may help you:

The Sermon at Benares (Prose)

In this chapter, Class 10 students learn about the life of Gautam Buddha and how he achieved enlightenment in his life. He preached his first sermon at the city of Benares and that sermon has been preserved and is still given there. On one such occasion, a woman named Kisa Gotami had come to visit Buddha to ask for medicine to bring her dead son back to life. The wise monk asked her to procure a handful of mustard seeds from a house where no one had ever lost a beloved one. She tried hard but could not find any such household and soon realised that Buddha taught a very significant lesson that death is inevitable for mortal beings and no one escapes from its clutches.

This poem is a conversation between a young man and a young woman, Anne where the man says that Anne is so beautiful that every man is most likely to fall in love with her. However, Anne responds that one should not only see the external beauty but should also appreciate one’s inner beauty, along with the physical appearance.