BYJU’S presents to you well-structured NCERT Solutions for Class 10 English Footprints Without Feet Chapter 3 that comprises one prose – “The Midnight Visitor”. The NCERT Solutions of Class 10 are written by our team of subject-matter experts to provide the best-in-class solutions for Class 10 students. The solutions will help students to grasp a comprehensive understanding of this unit and score good marks in the English exam. 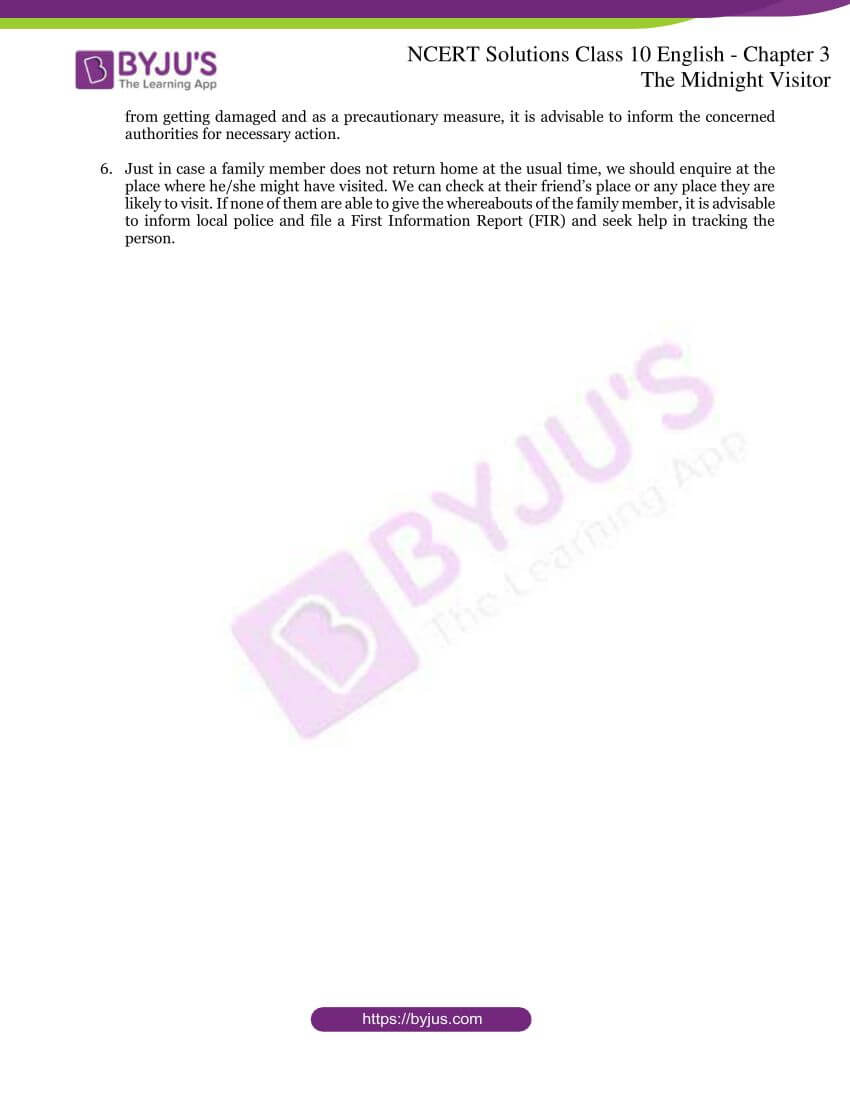 In this chapter, Class 10 students learn about a secret agent Ausable, who was expecting to receive a very important report. Fowler, a writer, had come to meet him, so when Ausable took him to his room, Fowler was terrified to see a tall and thin man pointing a small automatic pistol towards them. This man was another secret agent, Max who had come to threaten Ausable to hand over the secret report to him. The story takes a major turn when Ausable manages to convince Max and fools him in the name of an imaginary balcony that didn’t exist. In a nutshell, the story depicts how Ausable uses his smart wit and presence of mind to handle a difficult situation cautiously.

How is Ausable different from other secret agents?

Ausable was different from other secret agents in several ways. He had a small room in the musty corridor of a gloomy French hotel that was on the sixth and top floor and it was scarcely a setting for a romantic adventure. He was a sloppy fat man with a weird accent. In spite of living in Paris for over twenty years after moving from Boston, he spoke French and German with great difficulty and had not lost touch of his American accent. Generally, how a spy got messages passed secretly to him by beautiful girls, Ausable was not of that kind. He got only a routine telephone call making an appointment. These were some of the ways, he was different from the conventional notion of a secret agent. Besides, in the story we noticed how he dealt with Max by cooking up some stories and convinced him to act accordingly, so that he could get rid of Max forever.

Who is Fowler and what is his first authentic thrill of the day?

Fowler was a young and romantic writer who had come to meet Ausable. He experienced his first authentic thrill of the day when he saw an unknown man in Ausable’s room pointing a small automatic pistol towards him and Ausable.

How has Max got in?

Max had got into Ausable’s room with the help of a passkey or master key.

How does Ausable say he got in?

Ausable said that he thought Max might have got into the room through the balcony. He said grimly that it was the second time in a month that somebody had got into his room through that nuisance of a balcony.

“Ausable did not fit any description of a secret agent Fowler had ever read.” What do secret agents in books and films look like, in your opinion? Discuss in groups or in class some stories or movies featuring spies, detectives and secret agents, and compare their appearance with that of Ausable in this story. (You may mention characters from fiction in languages other than English. In English fiction you may have come across Sherlock Holmes, Hercule Poirot, or Miss Marple. Have you watched any movies featuring James Bond?)

Secret agents in fiction are usually projected to be perfect gentlemen who are tall, dark and handsome with awesome speaking skills and attractive masculine voice. They usually have well-built structures with beautiful women accompanying them. Some spies smoke a pipe (like Sherlock Holmes) or a cigar and they execute death-defying stunts just like in James Bond movies. Such movies show the use of hi-tech gadgets that help in catching the criminals and countering evil villains. Nonetheless, there are some exceptions in the above definition of detectives or spies. One such fine example is the detective character named Feluda which was created by famous Bengali filmmaker, Satyajit Ray. Feluda was a tall, charming and athletic secret agent who had amazing analytical power, eagle-eyed view and superb observation skill.

How does Ausable manage to make Max believe that there is a balcony attached to his room? Look back at his detailed description of it. What makes it a convincing story?

While talking to Fowler, Ausable created a comprehensive description of how his room was part a larger apartment and how the living room that connected through the door had a balcony. His further stated how somebody broke into his office through that balcony earlier and this made it a convincing story for Max to believe instantly. Ausable’s quick wit and calm composure in such a panicky situation made it a more convincing story for Max to believe in.

Looking back at the story, when do you think Ausable thought up his plan for getting rid of Max? Do you think he had worked out his plan in detail right from the beginning? Or did he make up a plan taking advantage of events as they happened?

No, I don’t think that Ausable had thought up his plan earlier to get rid of Max. He maintained his calm composure and took advantage of events and the situation as they happened. He made up a story of the balcony outside the room to convince Max into believing him and then when there was a knock at the door, he said that he had called the police to check on him and make sure that everything was alright. All these things made Max desperate and shiver in fear. He became restless and without checking outside, he jumped out of the window.

In this story, Ausable shows great ‘presence of mind,’ or the ability to think quickly, and act calmly and wisely, in a situation of danger and surprise. Give examples from your own experience, or narrate a story, which shows someone’s presence of mind.

This story has a resemblance to the play ‘If I Were You’. A criminal held Gerrard as a hostage. However, Gerrard trapped the criminal with confidence and treated him like a guest. He convinced the criminal to run away from that place as the police was behind him. He showed the criminal the exit door for escaping which was actually a cupboard door. The criminal blindly followed Gerrard’s instructions and tried exiting through the door, but was eventually trapped in the cupboard.

Discuss what you would do in the situations described below. Remember that presence of mind comes out of a state of mental preparedness. If you have thought about possible problems or dangers, and about how to act in such situations, you have a better chance of dealing with such situations if they do arise.

• A small fire starts in your kitchen.

• A child starts to choke on a piece of food.

• An electrical appliance starts to hiss and gives out sparks.

• A bicycle knocks down a pedestrian.

• It rains continuously for more than twenty-four hours.

• A member of your family does not return home at the usual or expected time.

You may suggest other such situations.