Get the most accurate and elaborate NCERT Solutions for Class 10 English Chapter 10 The Book That Saved the Earth here, including answers to all the questions of Class 10 English supplementary reader Footprints Without Feet. These NCERT Solutions of Class 10 will help students in scoring well in their examinations by giving them a clear idea of framing standard solutions. The solutions have been meticulously crafted by our team of experts, according to the guidelines of the CBSE board. 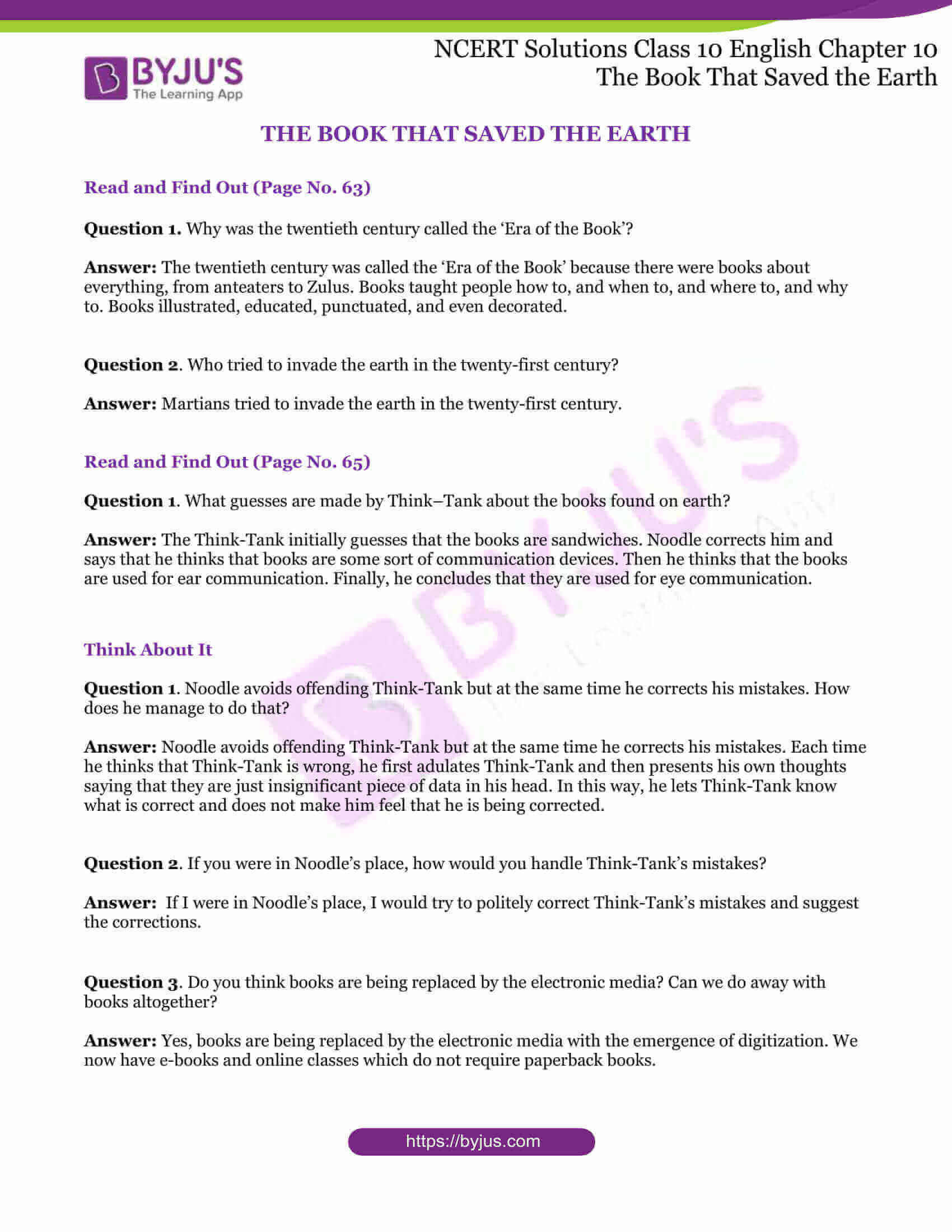 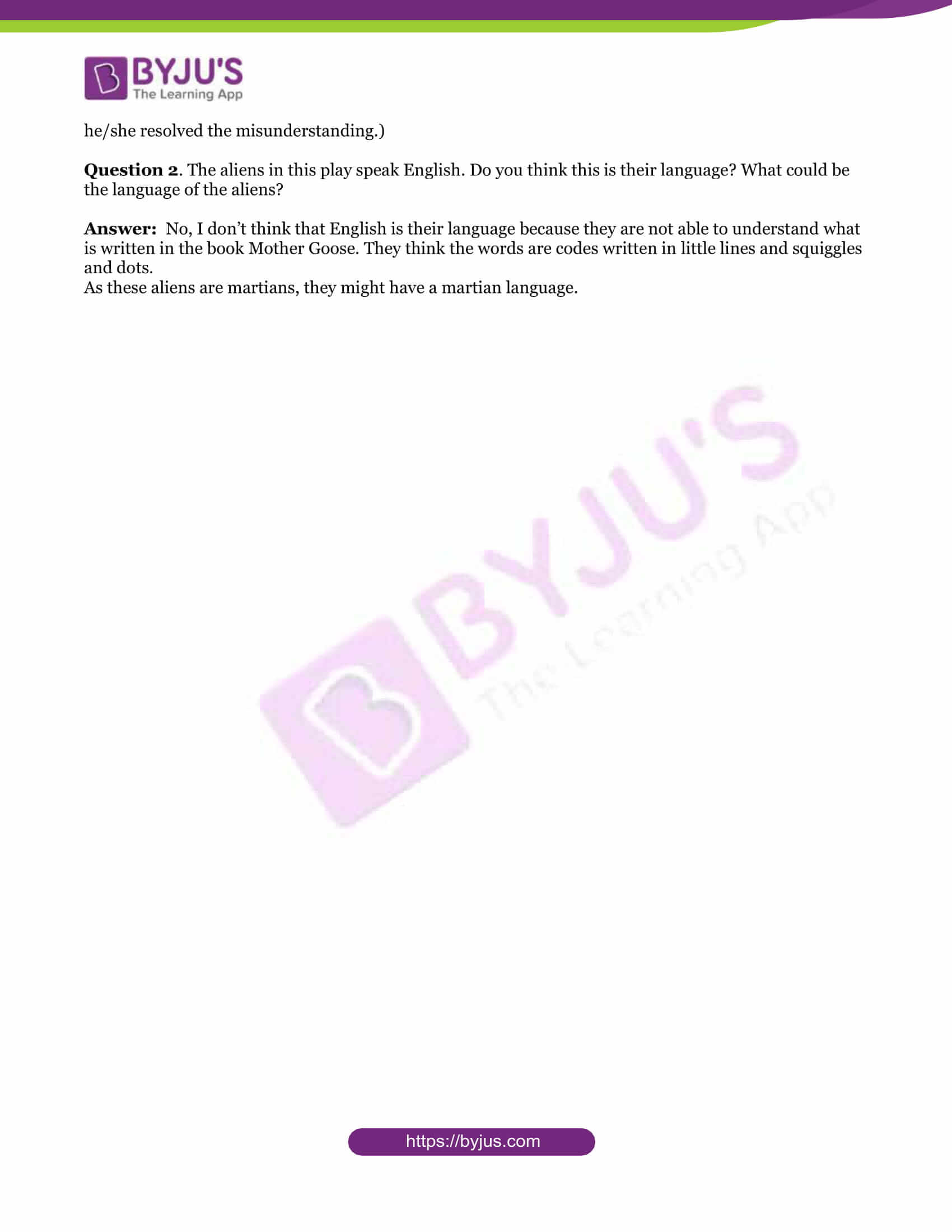 BYJU’S offers reliable NCERT Solutions for Class 10 English which the students can refer to whenever they have concerns regarding the appropriate answer to any question in their books. These solutions can be downloaded in printable PDF format, so that students can learn anytime, anywhere. Below is a brief description of the story of NCERT Solutions for Class 10 English Chapter 10.

The Book That Saved the Earth

Can a book of rhymes save the Earth from Martian invasion? Read this fun play which is set in the twenty-fifth century. Know how Martians were astonished by a book of children rhymes and were forced to change their plans of invading our planet Earth, thinking that people on Earth are way more advanced than they are.

Question 1. Why was the twentieth century called the ‘Era of the Book’?

Answer: The twentieth century was called the ‘Era of the Book’ because there were books about everything, from anteaters to Zulus. Books taught people how to, and when to, and where to, and why to. Books illustrated, educated, punctuated, and even decorated.

Question 2. Who tried to invade the earth in the twenty-first century?

Answer: Martians tried to invade the earth in the twenty-first century.

Question 1. What guesses are made by Think–Tank about the books found on earth?

Question 1. Noodle avoids offending Think-Tank but at the same time he corrects his mistakes. How does he manage to do that?

Answer: Noodle avoids offending Think-Tank but at the same time he corrects his mistakes. Each time he thinks that Think-Tank is wrong, he first adulates Think-Tank and then presents his own thoughts saying that they are just insignificant piece of data in his head. In this way, he lets Think-Tank know what is correct and does not make him feel that he is being corrected.

Question 2. If you were in Noodle’s place, how would you handle Think-Tank’s mistakes?

Answer: If I were in Noodle’s place, I would try to politely correct Think-Tank’s mistakes and suggest the corrections.

Question 3. Do you think books are being replaced by the electronic media? Can we do away with books altogether?

Answer: Yes, books are being replaced by the electronic media with the emergence of digitization. We now have e-books and online classes which do not require paperback books.

No, I don’t think that we can do away with books altogether because although there is a tendency of moving towards the electronic media, books still have their own importance. There are millions of people who love to read books. The feel and satisfaction of reading a book while holding it in your hands and turning its pages, is altogether a different experience that e-books will never be able to replace.

Question 4. Why are books referred to as a man’s best companion? Which is your favourite book and why? Write a paragraph about that book.

Answer: Books are referred to as a man’s best companion because they guide us, teach us, make us laugh, make us cry, make us introspect and make us a better version of ourselves. Books are the companions who will never leave us. They impart knowledge and wisdom. We can learn from them, enjoy them and get inspired.

(Student can write the name of his/her favourite book and explain what he/she likes about the book.)

Question 1. In what ways does Think-Tank misinterpret innocent nursery rhymes as threats to the Martians? Can you think of any incidents where you misinterpreted a word or an action? How did you resolve the misunderstanding?

Omega reads the lines from the rhyme:

How does your garden grow?

With cockle shells and silver bells

And pretty maids all in a row”

Listening the above lines, Think-Tank thinks that people on Earth are so advanced that they can actually grow crops of rare metals and high explosives.

Iota reads another rhyme from the book:

“Hey diddle diddle! The cat and the fiddle,

The cow jumped over the moon,

The little dog laughed to see such sport,

And the dish ran away with the spoon.”

Listening the above lines, Think-Tank thinks that Earthlings have taught their domesticated animals musical culture and space techniques. Even their dogs have a sense of humour.

Oop reads lines from another rhyme:

“Humpty Dumpty sat on the wall,

Humpty Dumpty had a great fall…”

Listening this, Think-Tank gets frightened because the picture of the Humpty-Dumpty resembles Think-Tank’s mighty balloon brain. He thinks that the Earthlings have seen him and are after him. He infers that the people on Earth are planning to capture Mars Central Control and him.

(Student can include any incident where he/she misinterpreted a word or an action and explain how he/she resolved the misunderstanding.)

Question 2. The aliens in this play speak English. Do you think this is their language? What could be the language of the aliens?

Answer: No, I don’t think that English is their language because they are not able to understand what is written in the book Mother Goose. They think the words are codes written in little lines and squiggles and dots.

As these aliens are martians, they might have a martian language.