BYJU’S presents the best-in-class NCERT Solutions for Class 10 English First Flight Chapter 11 that comprises one prose – “The Proposal”. The NCERT Solutions of Class 10 are curated by our panel of subject-matter experts to provide the most reliable solutions for Class 10 students. The solutions are designed in simple English to help students in grasping a detailed understanding of this unit, that guides them to attempt the questions of this unit during the exam with full confidence. 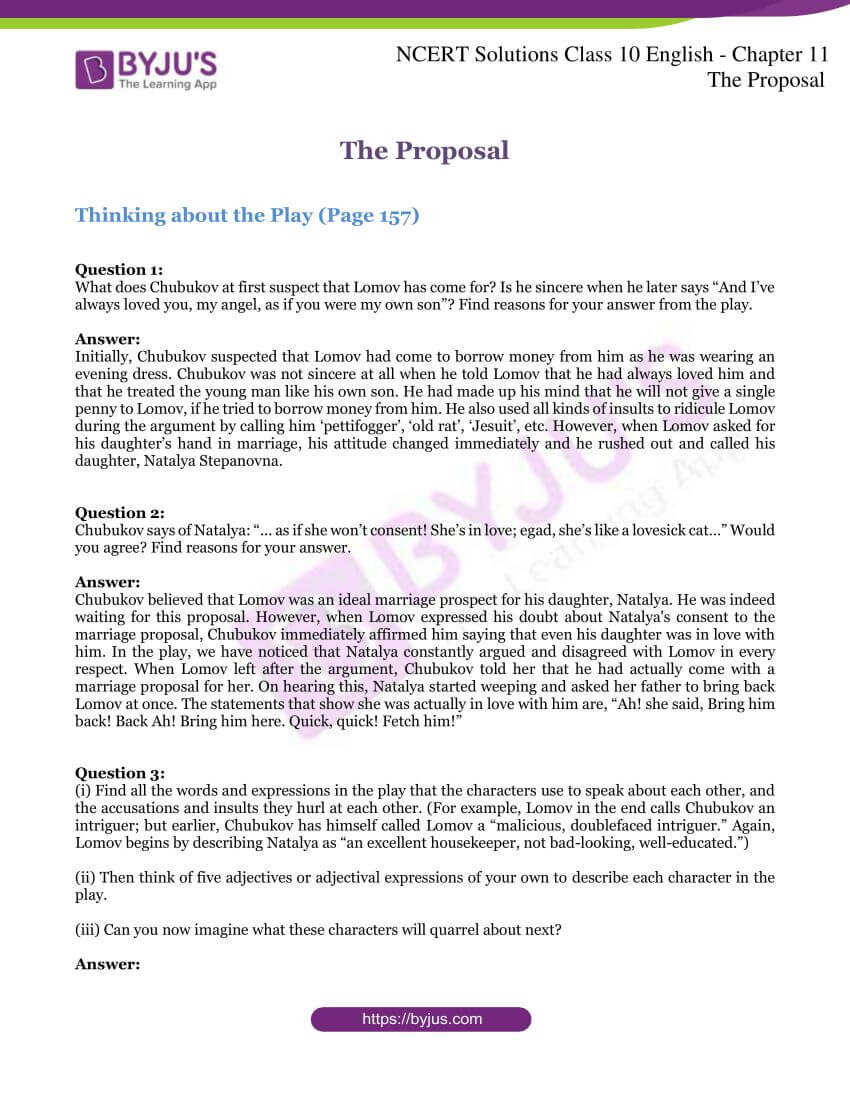 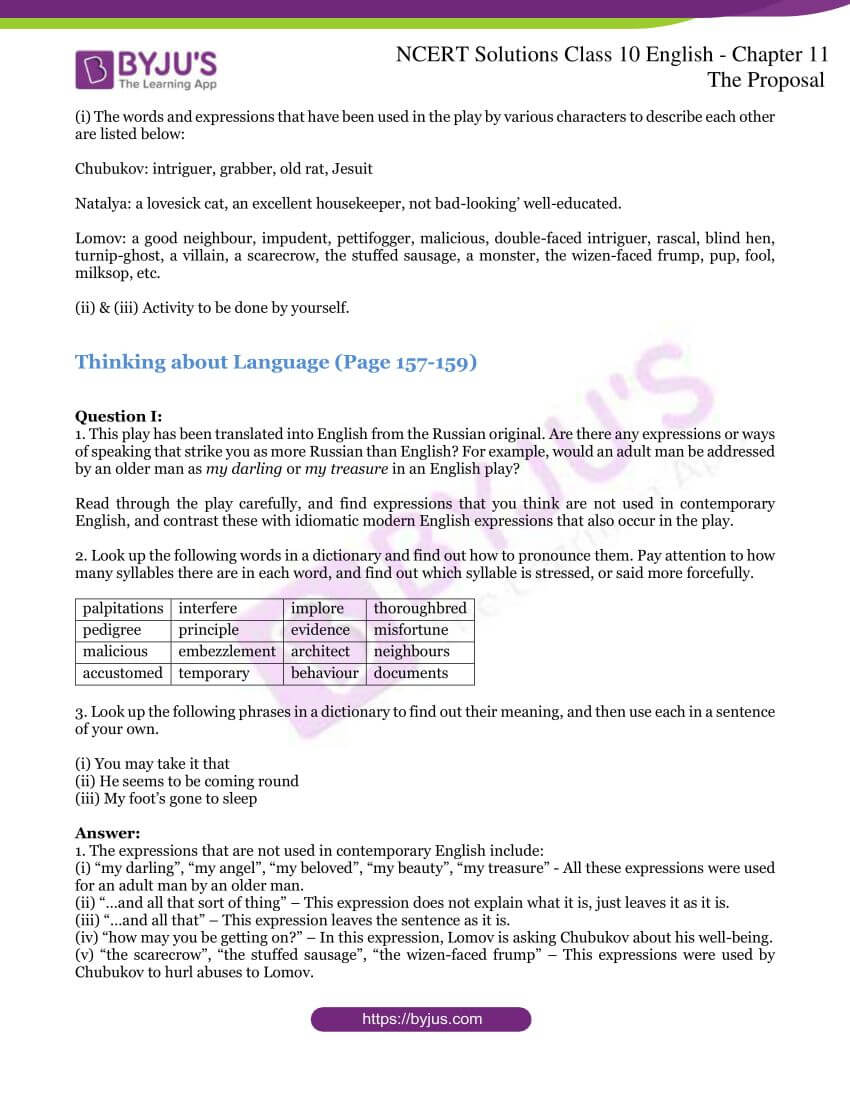 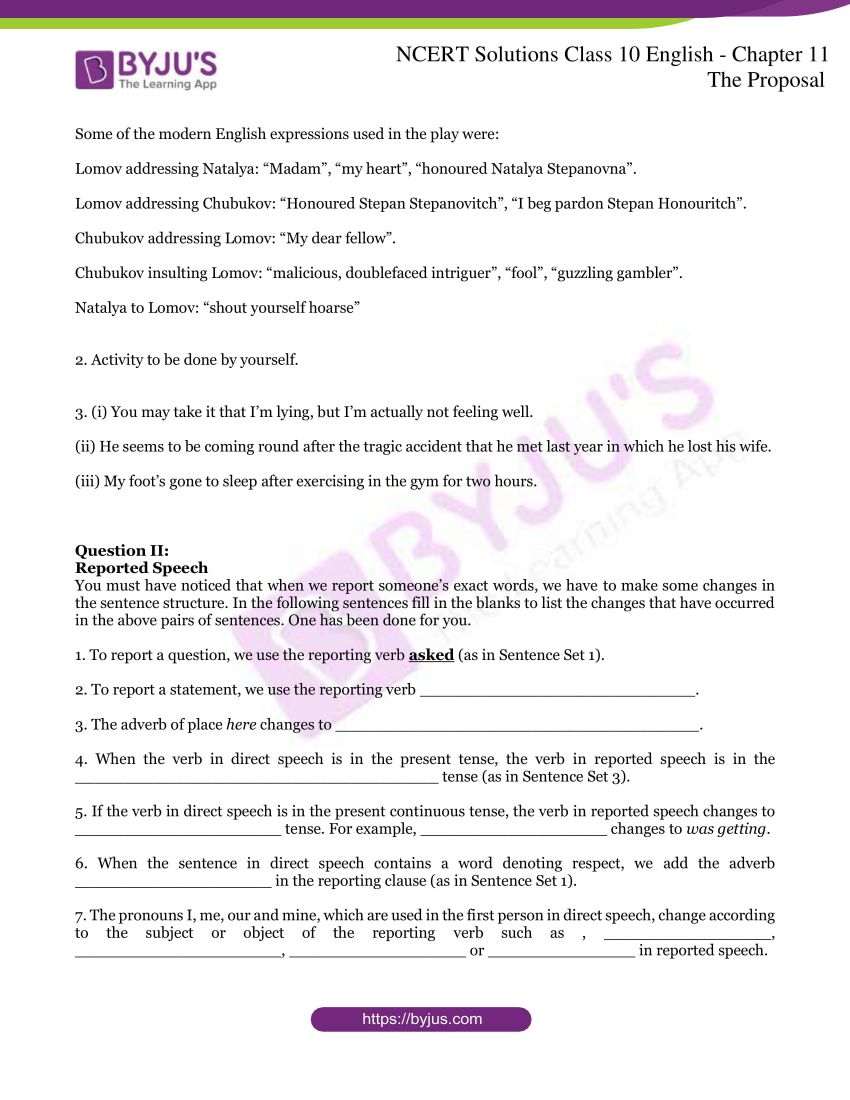 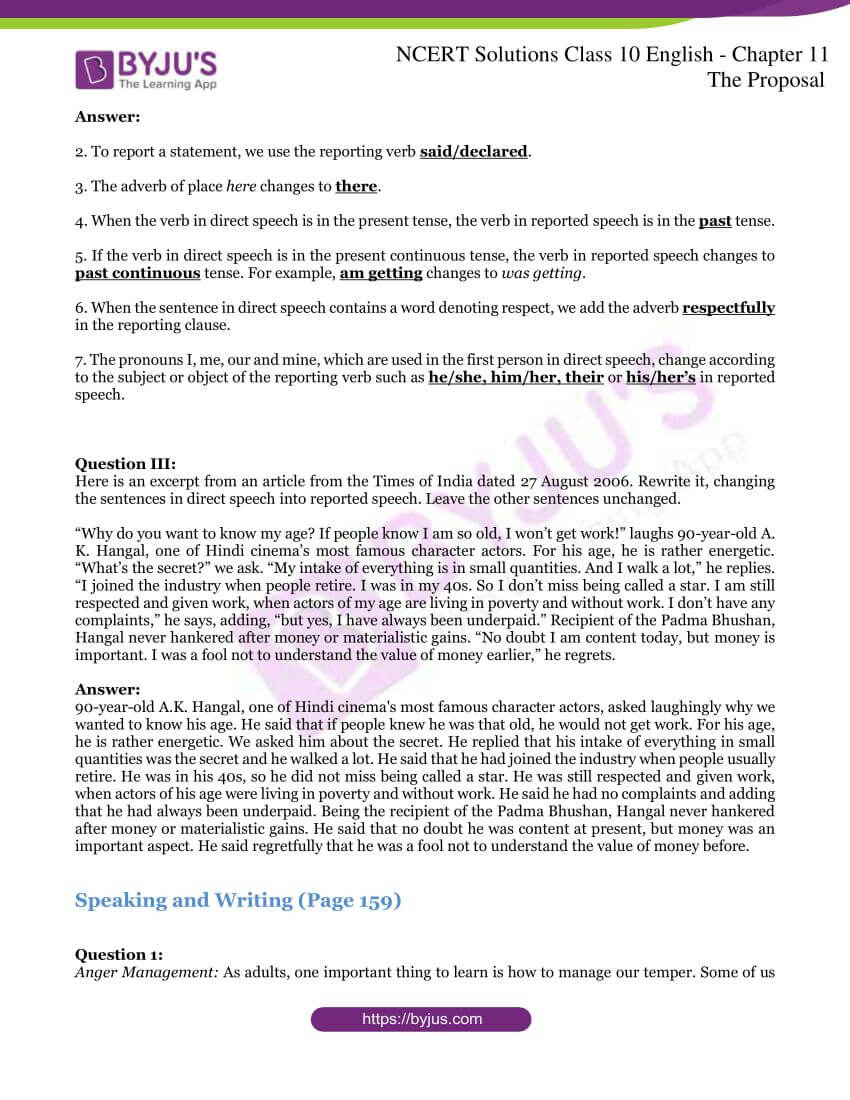 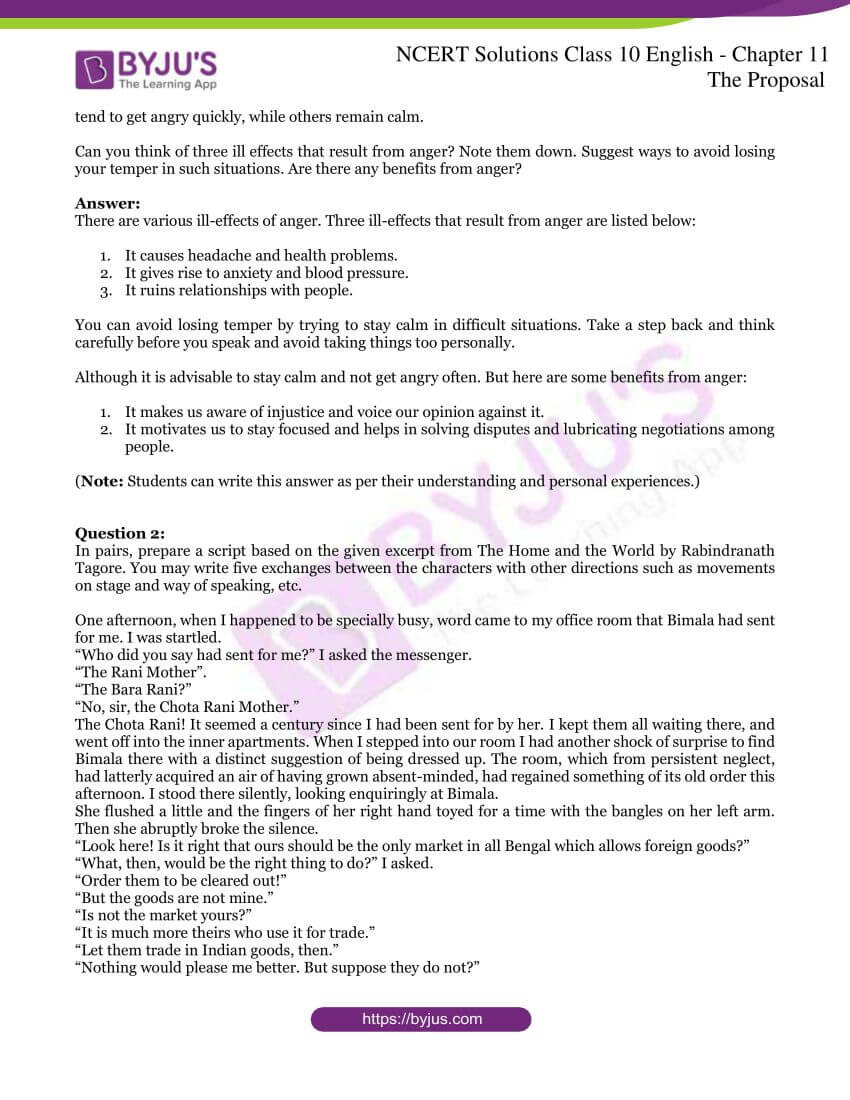 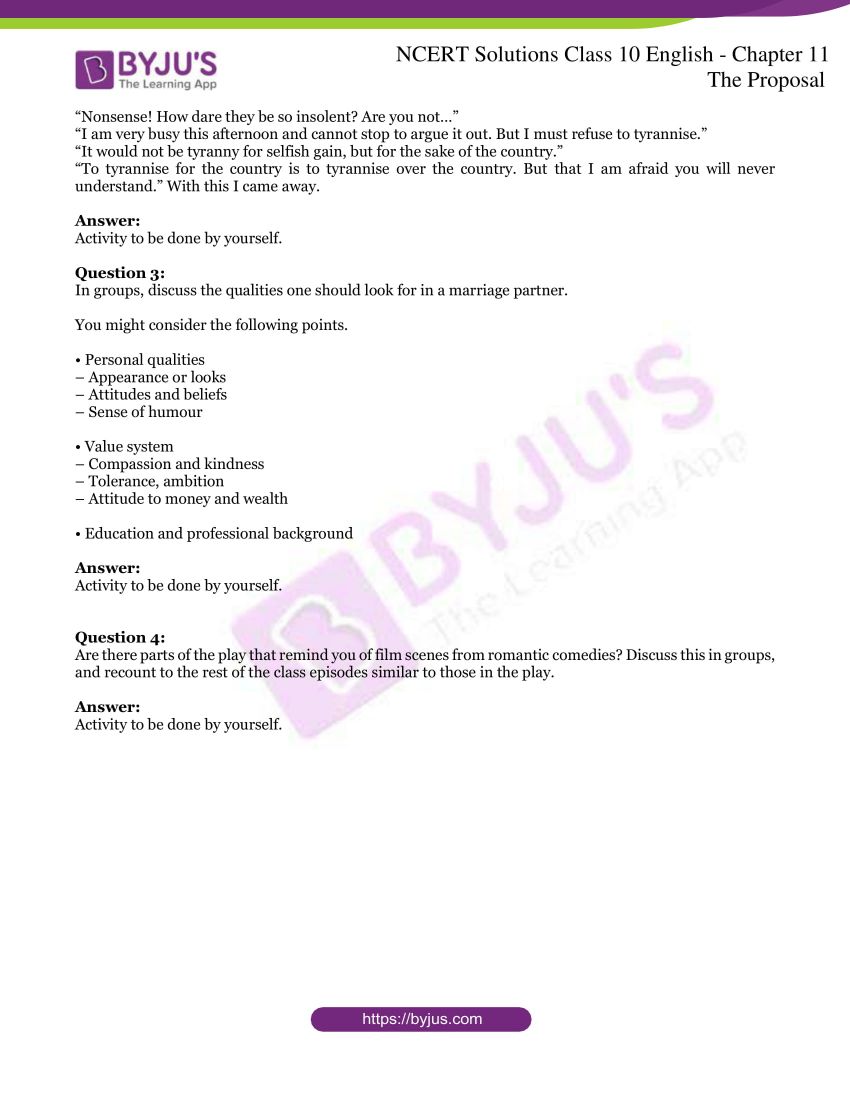 What does Chubukov at first suspect that Lomov has come for? Is he sincere when he later says “And I’ve always loved you, my angel, as if you were my own son”? Find reasons for your answer from the play.

Initially, Chubukov suspected that Lomov had come to borrow money from him as he was wearing an evening dress. Chubukov was not sincere at all when he told Lomov that he had always loved him and that he treated the young man like his own son. He had made up his mind that he will not give a single penny to Lomov, if he tried to borrow money from him. He also used all kinds of insults to ridicule Lomov during the argument by calling him ‘pettifogger’, ‘old rat’, ‘Jesuit’, etc. However, when Lomov asked for his daughter’s hand in marriage, his attitude changed immediately and he rushed out and called his daughter, Natalya Stepanovna.

Chubukov says of Natalya: “… as if she won’t consent! She’s in love; egad, she’s like a lovesick cat…” Would you agree? Find reasons for your answer.

Chubukov believed that Lomov was an ideal marriage prospect for his daughter, Natalya. He was indeed waiting for this proposal. However, when Lomov expressed his doubt about Natalya’s consent to the marriage proposal, Chubukov immediately affirmed him saying that even his daughter was in love with him. In the play, we have noticed that Natalya constantly argued and disagreed with Lomov in every respect. When Lomov left after the argument, Chubukov told her that he had actually come with a marriage proposal for her. On hearing this, Natalya started weeping and asked her father to bring back Lomov at once. The statements that show she was actually in love with him are, “Ah! she said, Bring him back! Back Ah! Bring him here. Quick, quick! Fetch him!”

(i) Find all the words and expressions in the play that the characters use to speak about each other, and the accusations and insults they hurl at each other. (For example, Lomov in the end calls Chubukov an intriguer; but earlier, Chubukov has himself called Lomov a “malicious, doublefaced intriguer.” Again, Lomov begins by describing Natalya as “an excellent housekeeper, not bad-looking, well-educated.”)

(ii) Then think of five adjectives or adjectival expressions of your own to describe each character in the play.

(iii) Can you now imagine what these characters will quarrel about next?

(i) The words and expressions that have been used in the play by various characters to describe each other are listed below:

Natalya: a lovesick cat, an excellent housekeeper, not bad-looking’ well-educated.

1. This play has been translated into English from the Russian original. Are there any expressions or ways of speaking that strike you as more Russian than English? For example, would an adult man be addressed by an older man as my darling or my treasure in an English play?

Read through the play carefully, and find expressions that you think are not used in contemporary English, and contrast these with idiomatic modern English expressions that also occur in the play.

2. Look up the following words in a dictionary and find out how to pronounce them. Pay attention to how many syllables there are in each word, and find out which syllable is stressed, or said more forcefully.

3. Look up the following phrases in a dictionary to find out their meaning, and then use each in a sentence of your own.

(i) You may take it that

(ii) He seems to be coming round

(iii) My foot’s gone to sleep

1. The expressions that are not used in contemporary English include:

(ii) “…and all that sort of thing” – This expression does not explain what it is, just leaves it as it is.

(iii) “…and all that” – This expression leaves the sentence as it is.

(iv) “how may you be getting on?” – In this expression, Lomov is asking Chubukov about his well-being.

(v) “the scarecrow”, “the stuffed sausage”, “the wizen-faced frump” – This expressions were used by Chubukov to hurl abuses to Lomov.

Some of the modern English expressions used in the play were:

Natalya to Lomov: “shout yourself hoarse”

2. Activity to be done by yourself.

(ii) He seems to be coming round after the tragic accident that he met last year in which he lost his wife.

(iii) My foot’s gone to sleep after exercising in the gym for two hours.

You must have noticed that when we report someone’s exact words, we have to make some changes in the sentence structure. In the following sentences fill in the blanks to list the changes that have occurred in the above pairs of sentences. One has been done for you.

1. To report a question, we use the reporting verb asked (as in Sentence Set 1).

2. To report a statement, we use the reporting verb said/declared.

3. The adverb of place here changes to there.

6. When the sentence in direct speech contains a word denoting respect, we add the adverb respectfully in the reporting clause.

7. The pronouns I, me, our and mine, which are used in the first person in direct speech, change according to the subject or object of the reporting verb such as he/she, him/her, their or his/her’s in reported speech.

Here is an excerpt from an article from the Times of India dated 27 August 2006. Rewrite it, changing the sentences in direct speech into reported speech. Leave the other sentences unchanged.

“Why do you want to know my age? If people know I am so old, I won’t get work!” laughs 90-year-old A. K. Hangal, one of Hindi cinema’s most famous character actors. For his age, he is rather energetic. “What’s the secret?” we ask. “My intake of everything is in small quantities. And I walk a lot,” he replies. “I joined the industry when people retire. I was in my 40s. So I don’t miss being called a star. I am still respected and given work, when actors of my age are living in poverty and without work. I don’t have any complaints,” he says, adding, “but yes, I have always been underpaid.” Recipient of the Padma Bhushan, Hangal never hankered after money or materialistic gains. “No doubt I am content today, but money is important. I was a fool not to understand the value of money earlier,” he regrets.

90-year-old A.K. Hangal, one of Hindi cinema’s most famous character actors, asked laughingly why we wanted to know his age. He said that if people knew he was that old, he would not get work. For his age, he is rather energetic. We asked him about the secret. He replied that his intake of everything in small quantities was the secret and he walked a lot. He said that he had joined the industry when people usually retire. He was in his 40s, so he did not miss being called a star. He was still respected and given work, when actors of his age were living in poverty and without work. He said he had no complaints and adding that he had always been underpaid. Being the recipient of the Padma Bhushan, Hangal never hankered after money or materialistic gains. He said that no doubt he was content at present, but money was an important aspect. He said regretfully that he was a fool not to understand the value of money before.

Anger Management: As adults, one important thing to learn is how to manage our temper. Some of us tend to get angry quickly, while others remain calm.

Can you think of three ill effects that result from anger? Note them down. Suggest ways to avoid losing your temper in such situations. Are there any benefits from anger?

There are various ill-effects of anger. Three ill-effects that result from anger are listed below:

You can avoid losing temper by trying to stay calm in difficult situations. Take a step back and think carefully before you speak and avoid taking things too personally.

Although it is advisable to stay calm and not get angry often. But here are some benefits from anger:

(Note: Students can write this answer as per their understanding and personal experiences.)

In pairs, prepare a script based on the given excerpt from The Home and the World by Rabindranath Tagore. You may write five exchanges between the characters with other directions such as movements on stage and way of speaking, etc.

One afternoon, when I happened to be specially busy, word came to my office room that Bimala had sent for me. I was startled.

“Who did you say had sent for me?” I asked the messenger.

The Chota Rani! It seemed a century since I had been sent for by her. I kept them all waiting there, and went off into the inner apartments. When I stepped into our room I had another shock of surprise to find

Bimala there with a distinct suggestion of being dressed up. The room, which from persistent neglect, had latterly acquired an air of having grown absent-minded, had regained something of its old order this afternoon. I stood there silently, looking enquiringly at Bimala.

She flushed a little and the fingers of her right hand toyed for a time with the bangles on her left arm. Then she abruptly broke the silence.

“Look here! Is it right that ours should be the only market in all Bengal which allows foreign goods?”

“What, then, would be the right thing to do?” I asked.

“Order them to be cleared out!”

“But the goods are not mine.”

“Is not the market yours?”

“It is much more theirs who use it for trade.”

“Let them trade in Indian goods, then.”

“Nothing would please me better. But suppose they do not?”

“Nonsense! How dare they be so insolent? Are you not…”

“I am very busy this afternoon and cannot stop to argue it out. But I must refuse to tyrannise.”

“It would not be tyranny for selfish gain, but for the sake of the country.”

In groups, discuss the qualities one should look for in a marriage partner.

– Attitude to money and wealth

Are there parts of the play that remind you of film scenes from romantic comedies? Discuss this in groups, and recount to the rest of the class episodes similar to those in the play.

This play is about a marriage proposal discussion among three characters – Ivan Lomov, a wealthy neighbour of Stepan Chubukov, who is also an affluent person and his twenty-five-year-old daughter, Natalya Stepanovna. Lomov visits Chubukov to seek his daughter’s hand in marriage. However, all the three are quarrelsome people who argue and fight over minor issues. The proposal is lost and forgotten amidst all heated arguments. A lot of drama ensues, but good sense prevails and the proposal is finally made although the disagreements in opinion continue until the end of the play.