NCERT Solutions for last exercise of the seventh chapter of class 11 Maths have been provided here for students to prepare well for the exam. These solutions are designed by the subject experts at BYJU’S and are in accordance with the NCERT syllabus and guidelines. The Miscellaneous Exercise of NCERT Solutions for Class 11 Maths Chapter 7- Permutations and Combinations is based on the following topics:

Understanding proper methods to solve the NCERT solutions for Class 11 Maths will help the students in analysing the different types of questions that are likely to be asked in the examination. Once the students become proficient in these solutions, their problem solving speed will increase, helping them in boosting their self confidence. 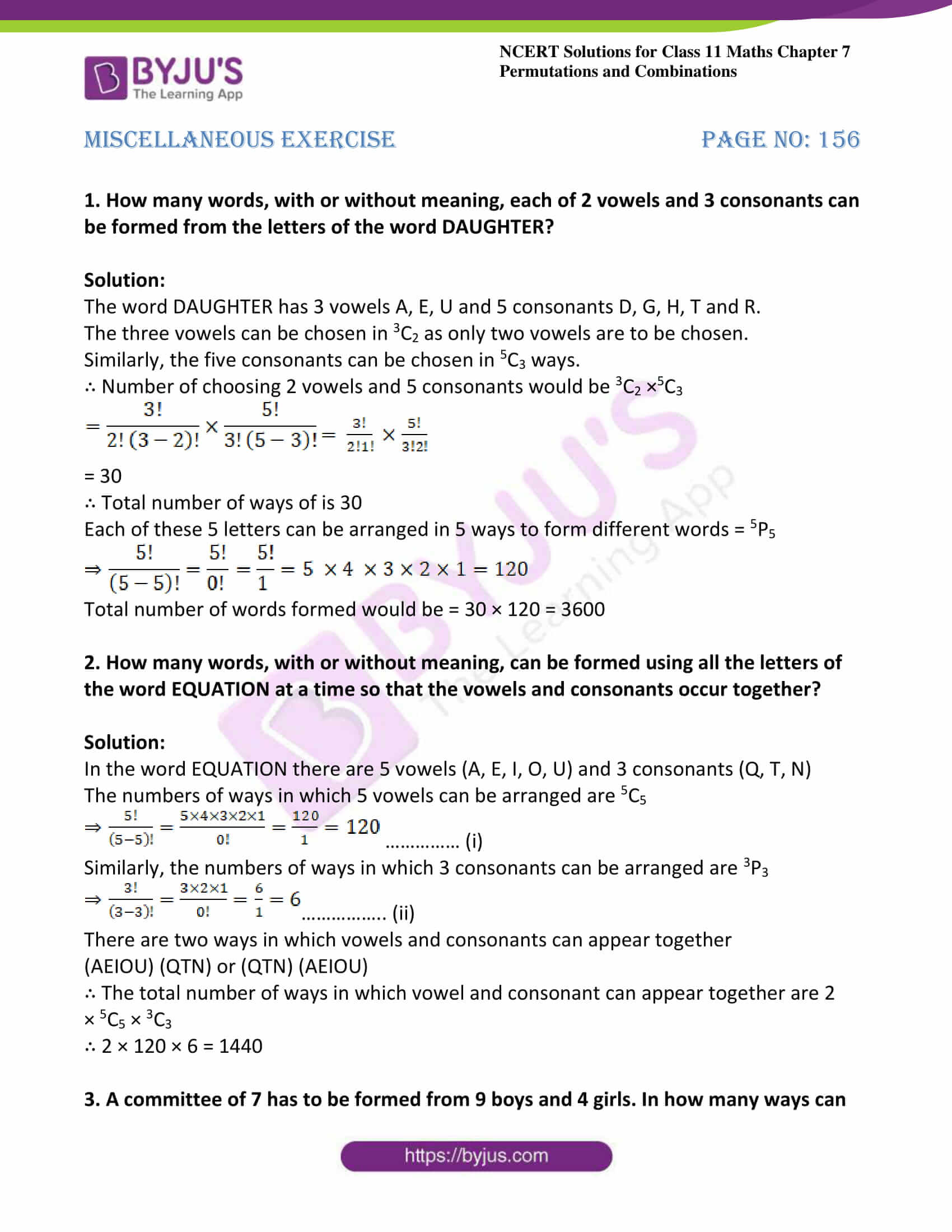 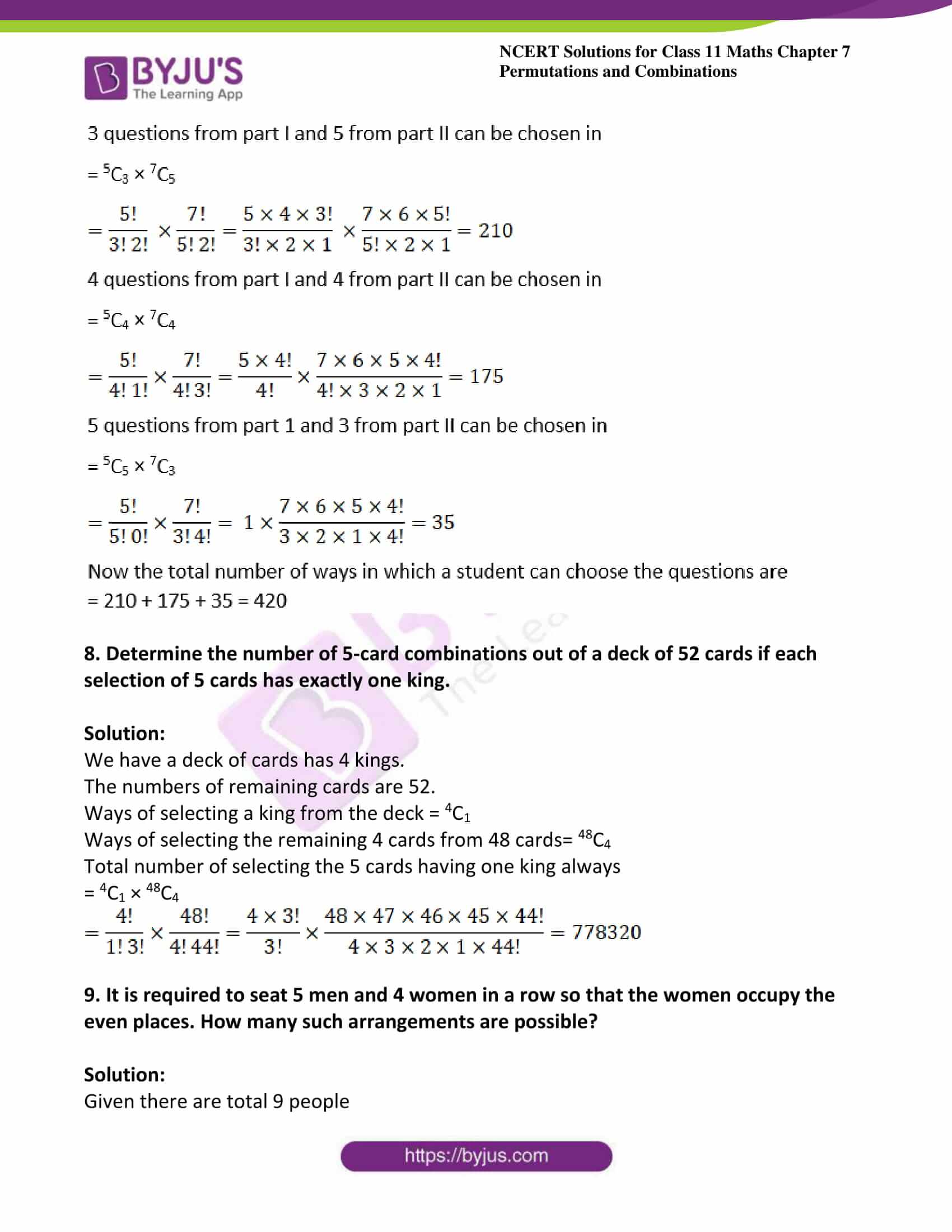 1. How many words, with or without meaning, each of 2 vowels and 3 consonants can be formed from the letters of the word DAUGHTER?

The three vowels can be chosen in 3C2 as only two vowels are to be chosen.

Similarly, the five consonants can be chosen in 5C3 ways.

∴ Total number of ways of is 30

2. How many words, with or without meaning, can be formed using all the letters of the word EQUATION at a time so that the vowels and consonants occur together?

Similarly, the numbers of ways in which 3 consonants can be arranged are 3P3

3. A committee of 7 has to be formed from 9 boys and 4 girls. In how many ways can this be done when the committee consists of:
(i) Exactly 3 girls?

(i) Given exactly 3 girls

Total numbers of girls are 4

Out of which 3 are to be chosen

∴ Number of ways in which choice would be made = 4C3

Total ways of forming the committee with exactly three girls

(ii) Given at least 3 girls

Choosing three girls we have done in (i)

And choosing 3 boys would be done in 9C3

Total numbers of ways of making the committee are

(iii) Given at most 3 girls

In this case the numbers of possibilities are

4. If the different permutations of all the letter of the word EXAMINATION are listed as in a dictionary, how many words are there in this list before the first word starting with E?

In dictionary words are listed alphabetically, so to find the words

Listed before E should start with letter either A, B, C or D

But the word EXAMINATION doesn`t have B, C or D

Hence the words should start with letter A

The remaining 10 places are to be filled by the remaining letters of the word EXAMINATION which are E, X, A, M, 2N, T, 2I, 0

Since the letters are repeating the formula used would be

Where n is remaining number of letters p1 and p2 are number of times the repeated terms occurs.

The number is divisible by 10 if the unit place has 0 in it.

And the numbers of choice available are 5

So, the total ways in which the rest the places can be filled are 5P5

We know that there are 5 vowels and 21 consonants in English alphabets.

The total number of ways selecting 2 vowels and 2 consonants

Total numbers of words that can be formed are

7. In an examination, a question paper consists of 12 questions divided into two parts i.e., Part I and Part II, containing 5 and 7 questions, respectively. A student is required to attempt 8 questions in all, selecting at least 3 from each part. In how many ways can a student select the questions? 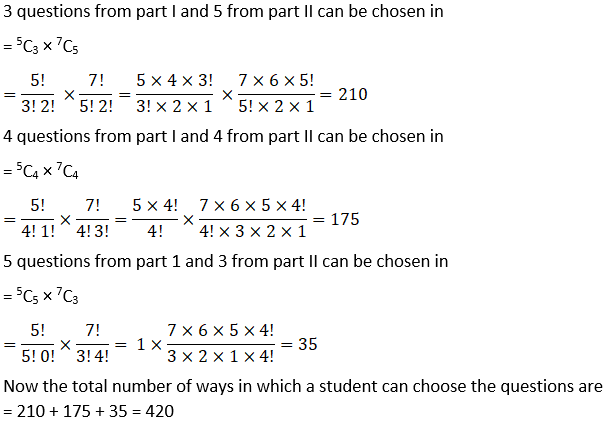 8. Determine the number of 5-card combinations out of a deck of 52 cards if each selection of 5 cards has exactly one king.

We have a deck of cards has 4 kings.

The numbers of remaining cards are 52.

Ways of selecting a king from the deck = 4C1

Ways of selecting the remaining 4 cards from 48 cards= 48C4

Total number of selecting the 5 cards having one king always

9. It is required to seat 5 men and 4 women in a row so that the women occupy the even places. How many such arrangements are possible?

Given there are total 9 people

The numbers of ways in which these can be seated = 5P5

The total numbers of sitting arrangements possible are

In this question we get 2 options that is

Number of students remained to be chosen for party = 7

(ii) None of them will go

The students going will be 10

Total numbers of ways in which students can be chosen are

11. In how many ways can the letters of the word ASSASSINATION be arranged so that all the S’s are together?

In the given word ASSASSINATION, there are 4 ‘S’. Since all the 4 ‘S’ have to be arranged together so let as take them as one unit.

where n is number of terms and p1, p2 p3 are the number of times the repeating letters repeat themselves.

Putting the values in formula we get