Do you live in a city? From where do you get the water and the electricity in your home? Do you know who fixes the lamp posts in your street? In Chapter 7 of CBSE Class 6 Civics, you will learn that urban administration is required to provide the basic amenities like street lights, garbage collection and water supply. The urban administration is also required to collect taxes (house and water taxes) and is responsible for cleaning the city’s drainage system, maintenance of parks and the market. The municipal corporations or the councils carry out duties related to urban administration in India. This chapter talks about the roles, responsibilities and duties of the urban administration in making sure that the city functions smoothly. We also provide here NCERT Solutions for Class 6 Civics Chapter 7 “Urban Administration,” which cover the solutions for the exercises given in the book ‘Social and Political Life’.

Students can download the NCERT Solutions for Class 6 Civics PDF below. 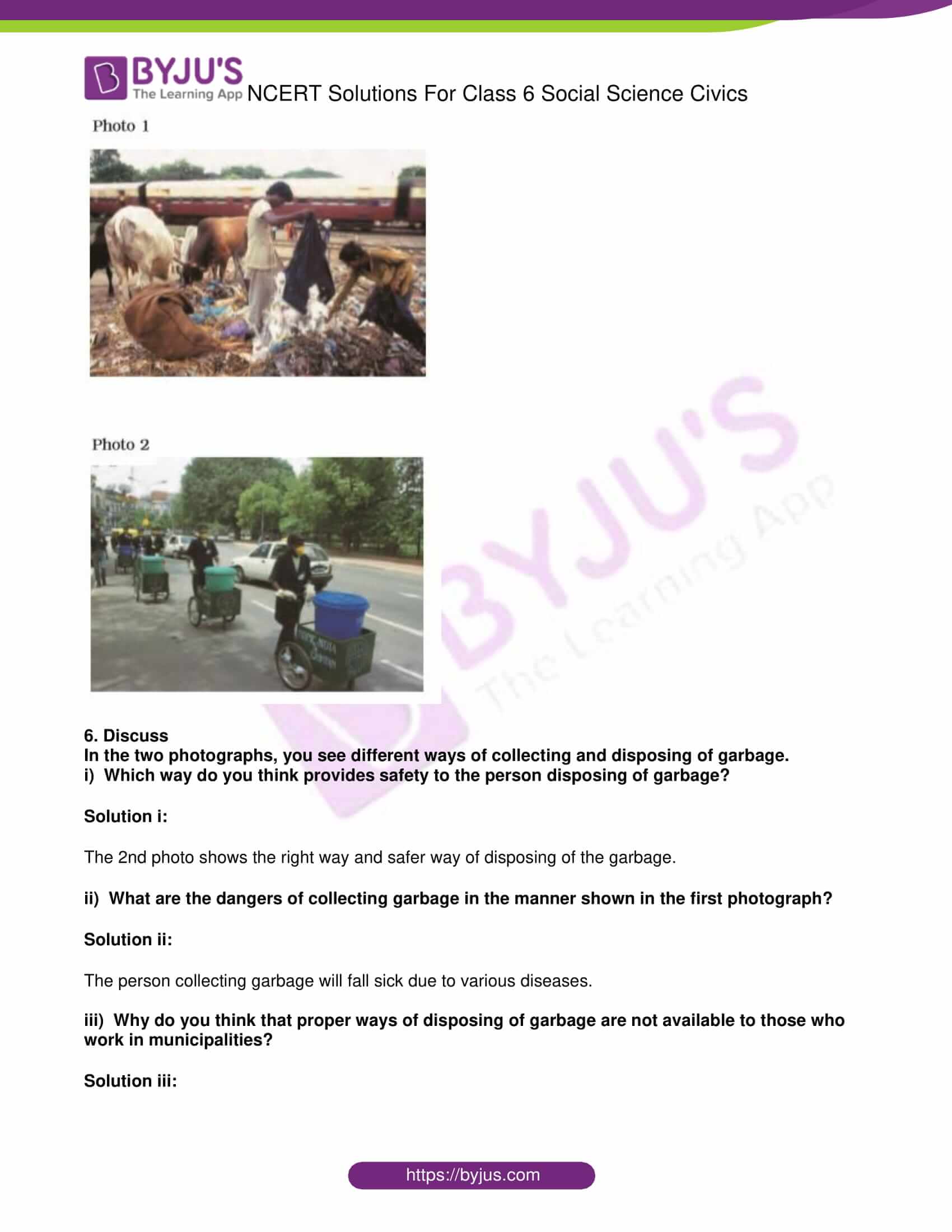 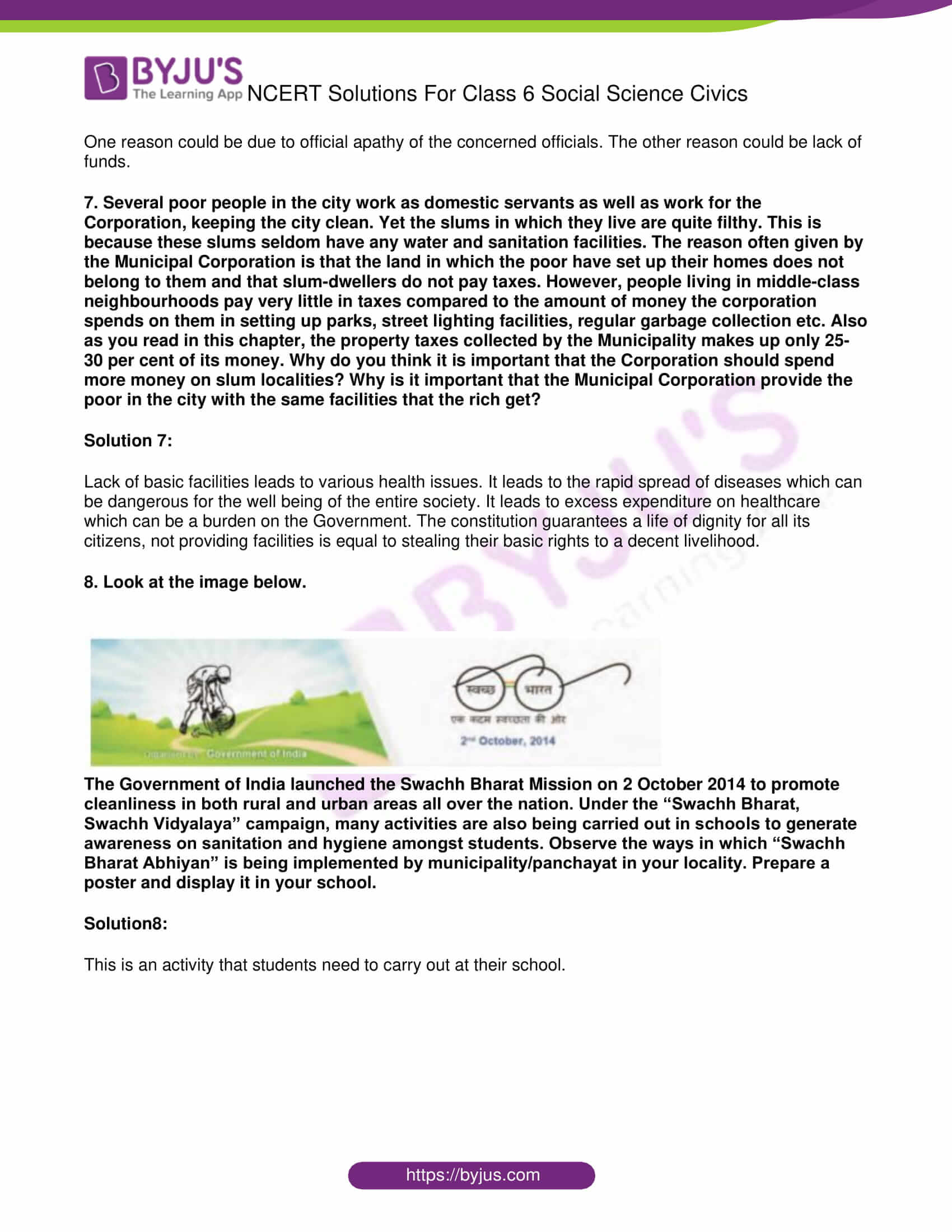 The solutions for Chapter 7, Urban Administration are given below. Students should also check NCERT Solutions for Class 6 for other subjects.

1. Why did the children go to Yasmin Khala’s house?

The children wanted to replace the street light, which was broken by them. Hence, Rehana suggested that the children visit Yasmin Kala’s house to understand the procedures for getting it replaced. Yasmin Kala lived in the same lane and had just retired from Municipal Corporation.

2. List four ways in which the work of the Municipal Corporation affects the life of a city-dweller.

3. Who is a Municipal Councillor?

He is an elected member of the committee of a municipal corporation.

4. What did Gangabai do and why?

She was protesting against the Ward councillor due to the lack of maintenance of streets. The garbage was not being disposed of and this was creating a menace in the locality due to dogs, rats, flies and mosquitoes.

5. How does the Municipal Corporation earn the money to do its work?

They usually earn their money by imposing the following taxes. 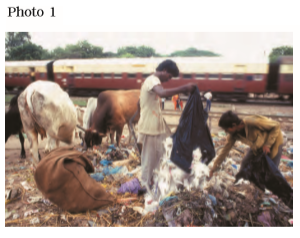 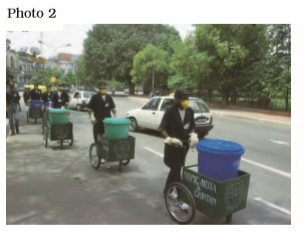 In the two photographs, you see different ways of collecting and disposing of garbage.

i) Which way do you think provides safety to the person disposing of garbage?

The 2nd photo shows the right and safer way of disposing of the garbage.

ii) What are the dangers of collecting garbage in the manner shown in the first photograph?

The person collecting garbage will fall sick due to various diseases.

iii) Why do you think that proper ways of disposing of garbage are not available to those who work in municipalities?

7. Several poor people in the city work as domestic servants as well as work for the Corporation, keeping the city clean. Yet the slums in which they live are quite filthy. This is because these slums seldom have any water and sanitation facilities. The reason often given by the Municipal Corporation is that the land in which the poor have set up their homes does not belong to them and that slum-dwellers do not pay taxes. However, people living in middle-class neighbourhoods pay very little in taxes compared to the amount of money the corporation spends on them in setting up parks, street lighting facilities, regular garbage collection etc. Also as you read in this chapter, the property taxes collected by the Municipality makes up only 25-30 per cent of its money. Why do you think it is important that the Corporation should spend more money on slum localities? Why is it important that the Municipal Corporation provide the poor in the city with the same facilities that the rich get?

Lack of basic facilities leads to various health issues. It leads to the rapid spread of diseases which can be dangerous for the well being of the entire society. It leads to excess expenditure on healthcare, which can be a burden on the Government. The constitution guarantees a life of dignity for all its citizens. Not providing the basic facilities is equal to stealing their basic rights to a decent livelihood.

8. Look at the image below.

The Government of India launched the Swachh Bharat Mission on 2 October 2014 to promote cleanliness in both rural and urban areas all over the nation. Under the “Swachh Bharat, Swachh Vidyalaya” campaign, many activities are also being carried out in schools to generate awareness on sanitation and hygiene amongst students. Observe the ways in which “Swachh Bharat Abhiyan” is being implemented by municipality/panchayat in your locality. Prepare a poster and display it in your school.

This is an activity that students need to carry out at their school.

The NCERT Class 6 Social and Political Life Chapter 7 talks about the following topics:

How can students prepare for the annual exam using the NCERT Solutions for Class 6 Civics Chapter 7?

Before the annual exam, students have to learn the chapter thoroughly and revise them regularly to attain a strong grip over the key concepts. The NCERT Solutions provided by BYJU’S is an apt resource for exam preparations and to score high marks in the exam. It’s recommended that students refer to the solutions while attempting the questions of a new chapter to comprehend the method of answering as per the latest CBSE guidelines. Also, students must read thoroughly the syllabus for the academic year before the exam to understand the marks weightage for the chapter.

What are the ways in which the work of the Municipal Corporation affect the life of a city-dweller discussed in NCERT Solutions for Class 6 Civics Chapter 7?

The ways in which the work of the Municipal Corporation affect the life of a city-dweller are:
1. Construction of roads, street lights, parks, etc.
2. Disposal of garbage
3. Maintenance of drainage system
4. Supply of drinking water and electricity
Students who have doubts while answering the textbook questions can refer to these solutions to obtain a sharp idea about the main concepts.

What will students learn in Chapter 7 of NCERT Solutions for Class 6 Civics?

In Chapter 7 of NCERT Solutions for Class 6 Civics, students will learn about the following topics:
1. The Ward Councillor and Administrative Staff- how the city is divided into different wards, the problems associated with it, and the work that is done.
2. A community protest – how a protest is carried out by different citizens when the work done by municipalities is inadequate.
To learn more about these topics in detail, students can utilise the NCERT Solutions created by subject-matter experts at BYJU’S.