NCERT Solutions for Class 11 Biology Chapter 17 Breathing and Exchange of Gases is categorized under Unit 5 – Human Physiology of the second term CBSE Syllabus 2021-22. These NCERT Solutions incline to the latest update on the term-wise syllabus prescribed by the CBSE board. Biology is a vast topic. Knowledge of Biology is critical especially if one is interested in making a career in the medical field.

We at BYJU’S provide NCERT Solutions for Class 11 which aims at equipping students with the best resource for the academic requirements of Class 11 students. These NCERT Solutions are deemed to be one of the best, apt solutions over the years by students as it provides just the information required for every question. This ensures that students are able to understand concepts while learning for their second term examinations thus promoting conceptual based learning. 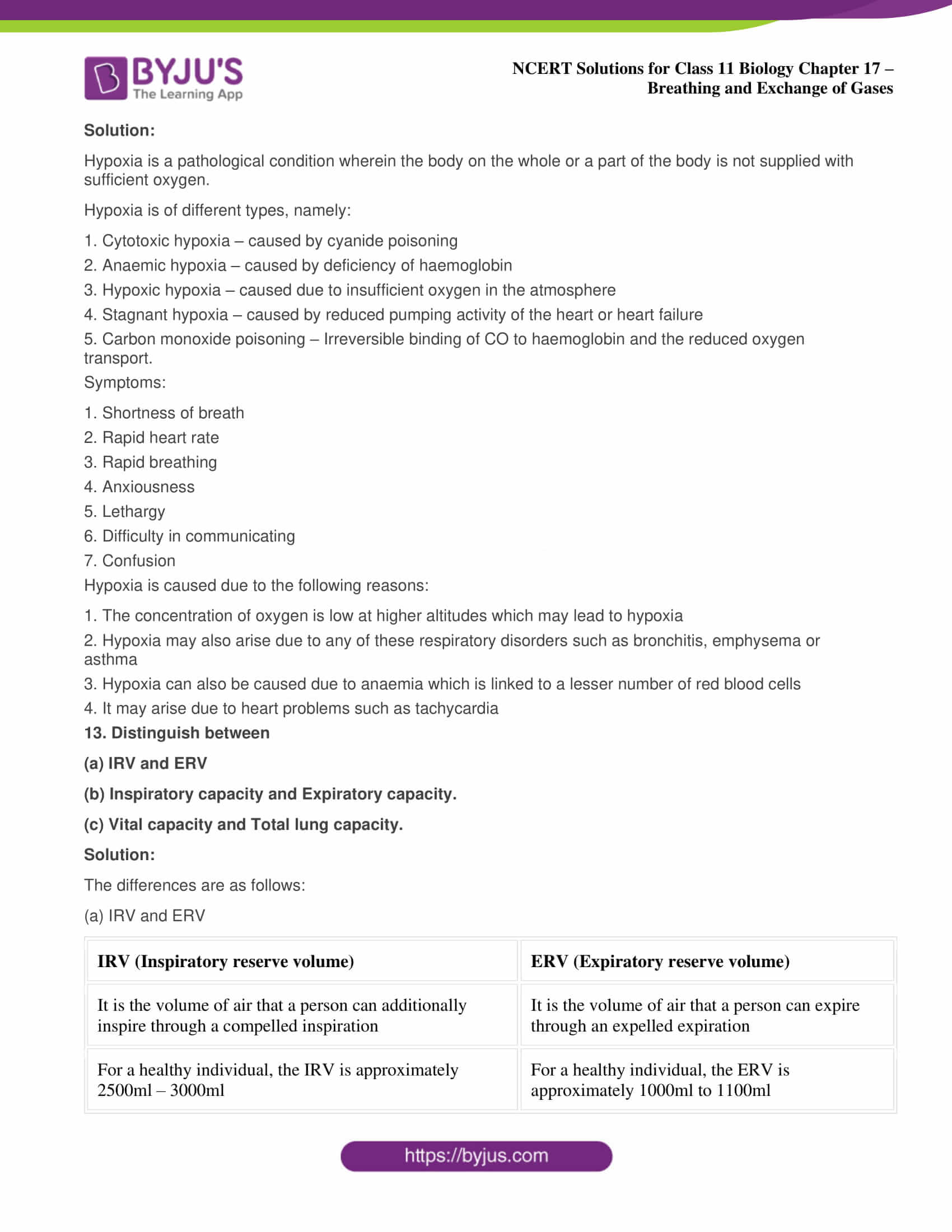 1. Define vital capacity. What is its significance?

Vital capacity can be defined as the maximum volume of air a person can breathe in post a forced expiration.

(ii) The excess quantity of inhaled air represents the maximum amount of oxygen available for glucose-oxidation. This way more energy is available for the body.

2. State the volume of air remaining in the lungs after a normal breathing.

Thus, the functional residual capacity of the lungs in human beings is nearly 2500 ml to 3000 ml

3. Diffusion of gases occurs in the alveolar region only and not in the other parts of The endothelial membrane of the blood capillaries and the alveolar membrane is distinguished by a fine basement substance. This fine barrier facilitates easy diffusion of the gases. The alveolar air that comes in close proximity with the blood capillaries has higer levels of pO2 and lower levels of pCO2 that promote the gas-diffusion. All these structural pluses that are found in alveoli is not present in any other structure of the respiratory system. Therefore, the gas diffusion phenomena occurs in the alveolar region only and not in any other part.

4.What are the major transport mechanisms for CO2? Explain.

Carbon dioxide is liberated by a vigorously active tissue in the blood. On an average, every 100ml of blood accepts approximately 3.7ml of CO2 from tissues.

In blood, carbon dioxide is carried in three forms:

1. Carbon dioxide as a simple solution

2. Carbon dioxide as a bicarbonate ion

The partial pressure of carbon dioxide at the tissue site is high due to catabolism. Carbon dioxide diffuses in the blood and forms carbonic acid after reacting with water. This reaction occurs in the presence of the carbonic anhydrase enzyme. The reaction is as follows:

5. What will be the pO2 and pCO2 in the atmospheric air compared to those in the alveolar air?

The pO2 and pCO2 in the atmospheric air compared to those in the alveolar air will be:

In a mixture of gases, each gas exerts a pressure known as partial pressure. These gases always diffuse across the pressure gradient. Oxygen permeates easily into the lungs when the level of pO2 is higher in the atmosphere. Likewise, carbon dioxide can diffuse out of the body easily if the pCO2 level is lower in the atmosphere.

6.Explain the process of inspiration under normal conditions. The process by which fresh air enters into the lungs is known as inspiration. When the intrapulmonary pressure (pressure in the lungs) is lesser than the atmospheric pressure, inspiration takes place. The muscles of the diaphragm, external intercostal muscles and abdominal muscles are referred to as the inspiratory muscles which bring about the process of inspiration.

The muscles of the diaphragm contract, pulling the diaphragm downwards to the abdominal cavity, causing it to become flat which results in an increase in the thoracic cavity in the anteroposterior direction. The contraction of the external intercostal muscles lifts up the ribs and the sternum resulting in the expansion of the thoracic chamber, in a dorso-ventral orientation.

This overall increase in the thoracic volume increases the pulmonary volume which in turn causes the decrease of pressure in the lungs. The atmospheric pressure expels air from outwards into the lungs. To compress the abdominal organs, the abdominal muscles relax that causes an escalation in the strength of the inspiration.

7.How is respiration regulated?

The levels of carbon dioxide and hydrogen ions in the blood is detected by the receptors located in the carotid artery and the aorta. As the carbon dioxide level increases, the respiratory centre sends nerve impulses for the required changes.

8. What is the effect of pCO2 on oxygen transport?

pCO2 has a crucial role to play in the process of oxygen transport. As a result of low pCO2 levels in the alveoli, oxygen tends to bind with the hemoglobin, to form Oxyhaemoglobin. Higher levels of pCO2 and lower level of pO2 in the tissues promotes the dissociation of oxygen from Oxyhaemoglobin. The level of pCO2 is low at the surface of the lungs, here O2 binds with the haemoglobin and dissociates at the tissue grade, where the level of pCO2 is higher.

9. What happens to the respiratory process in a man going up a hill?

As we go up higher, the altitude increases. At this altitude, the concentration of atmospheric oxygen is lesser, which means to say that the partial pressure of oxygen declines. This situation of inadequate oxygen-supply, demands more of oxygen. In order to increase the supply of oxygen to the blood, the man begins to breathe rapidly. Therefore, it causes an increase in the heart rate to be able to meet the demand of oxygen supply.

10.What is the site of gaseous exchange in an insect? The respiratory organs of insects is trachea. Trachea has openings known as spiracles through which air enters. Spiracles are located on either side of the abdomen of the insect. A pair of spiracles are found on each segment of the abdomen. Furthermore, the trachea branches into smaller tubes until they reach the level of tissues. The oxygen that enters the trachea is exchanged by diffusion with the tissues. Simultaneously, carbon dioxide that reaches the trachea from the tissues is forced out of the body.

11.Define oxygen dissociation curve. Can you suggest any reason for its sigmoidal pattern?

A graph attained when the percentage saturation of haemoglobin with oxygen is plotted against the partial pressure of oxygen. 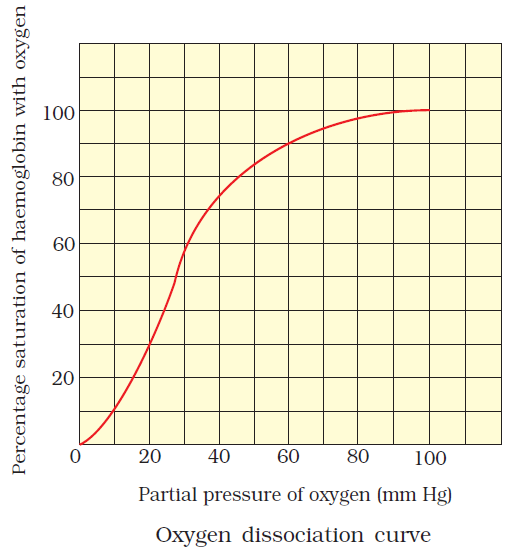 12. Have you heard about hypoxia? Try to gather information about it, and discuss with your friends.

Hypoxia is a pathological condition wherein the body on the whole or a part of the body is not supplied with sufficient oxygen.

Hypoxia is of different types, namely:

3. Hypoxic hypoxia – caused due to insufficient oxygen in the atmosphere

4. Stagnant hypoxia – caused by reduced pumping activity of the heart or heart failure

Hypoxia is caused due to the following reasons:

1. The concentration of oxygen is low at higher altitudes which may lead to hypoxia

2. Hypoxia may also arise due to any of these respiratory disorders such as bronchitis, emphysema or asthma

3. Hypoxia can also be caused due to anaemia which is linked to a lesser number of red blood cells

4. It may arise due to heart problems such as tachycardia

14. What is Tidal volume? Find out the Tidal volume (approximate value) for a healthy human in an hour.

List of subtopics covered in Chapter 17 – Breathing and Exchange of Gases:

Respiration is an essential life process carried out by all living entities. The process of exchange of oxygen from the atmosphere with carbon dioxide that is produced by the cells is termed as breathing which is commonly known as respiration. The Chapter provides students with insights into the mechanism of breathing.

What are the types of Hypoxia explained in the Chapter 17 of NCERT Solutions for Class 11 Biology?

Explain the significance of vital capacity from the Chapter 17 of NCERT Solutions for Class 11 Biology.

The significance of vital capacity from the Chapter 17 of NCERT Solutions for Class 11 Biology are –
1. It represents the maximum amount of air that can be renewed or converted in the respiratory system in a single respiration.
2. The excess quantity of air inhaled shows the maximum amount of oxygen present for glucose oxidation. In this way, the body will have more energy.

List the topics/subtopics covered in the Chapter 17 of NCERT Solutions for Class 11 Biology.

The topics/subtopics covered in the Chapter 17 of NCERT Solutions for Class 11 Biology are –
17.1 – Respiratory Organs
17.2 – Mechanism of Breathing
17.3 – Exchange of Gases
17.4 – Transport of Gases
17.5 – Regulation of Respiration
17.6 – Disorders of Respiratory System