Get access to NCERT Solutions for Class 11 Biology Chapter 3 Plant Kingdom here. The solutions provided here are well-reviewed and curated perfectly. Also, these NCERT Solutions are updated according to the latest term – I CBSE Syllabus 2021-22 for the best of students’ understanding with the vision of making learning an interesting experience and also to aid them to ace the first term exam.

Concepts covered in Class 11 do not stay limited to the same academic year but are also significant for the next academic year where continuation of concepts is inevitable. Hence, students are required to understand the concepts rather than memorizing. NCERT Solutions for Class 11 Biology helps students exactly with this. It is the ultimate study tool that can be beneficial for cracking the first term and competitive examinations as well.

At BYJU’S, students are presented with NCERT Solutions that have been crafted by subject matter experts having extensive knowledge of the respective subjects. 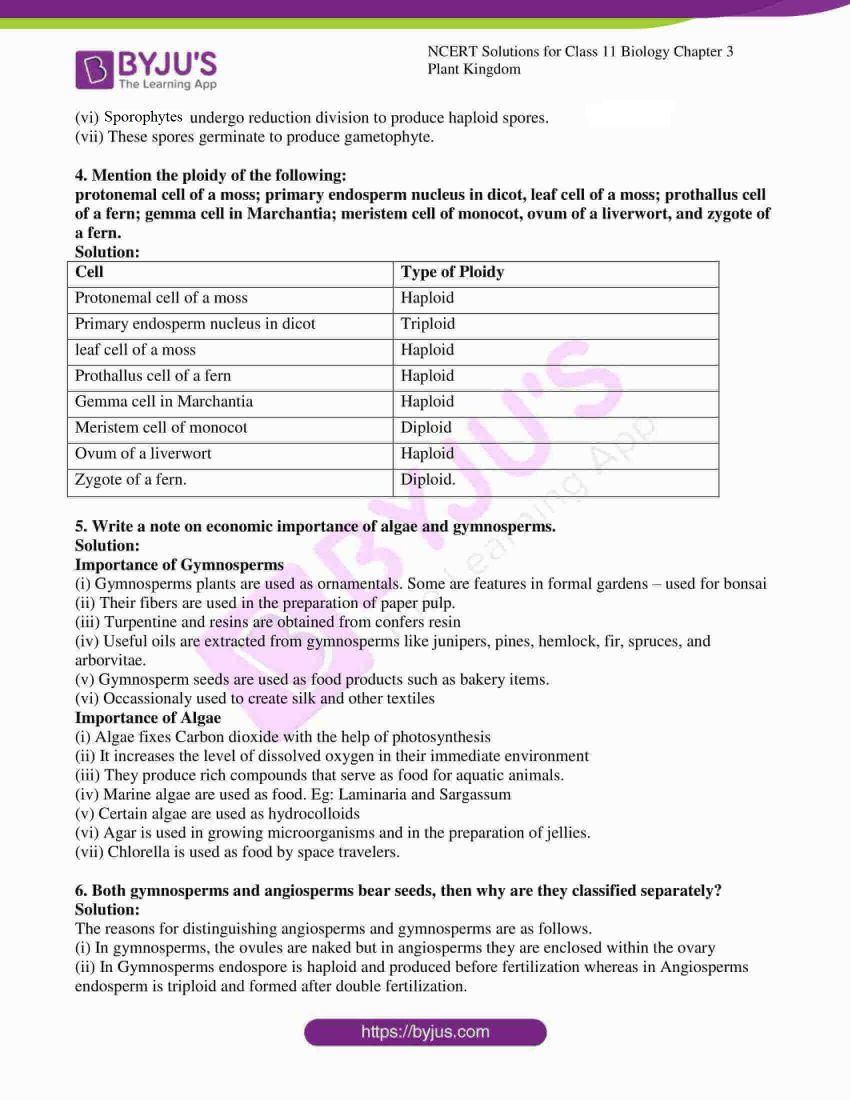 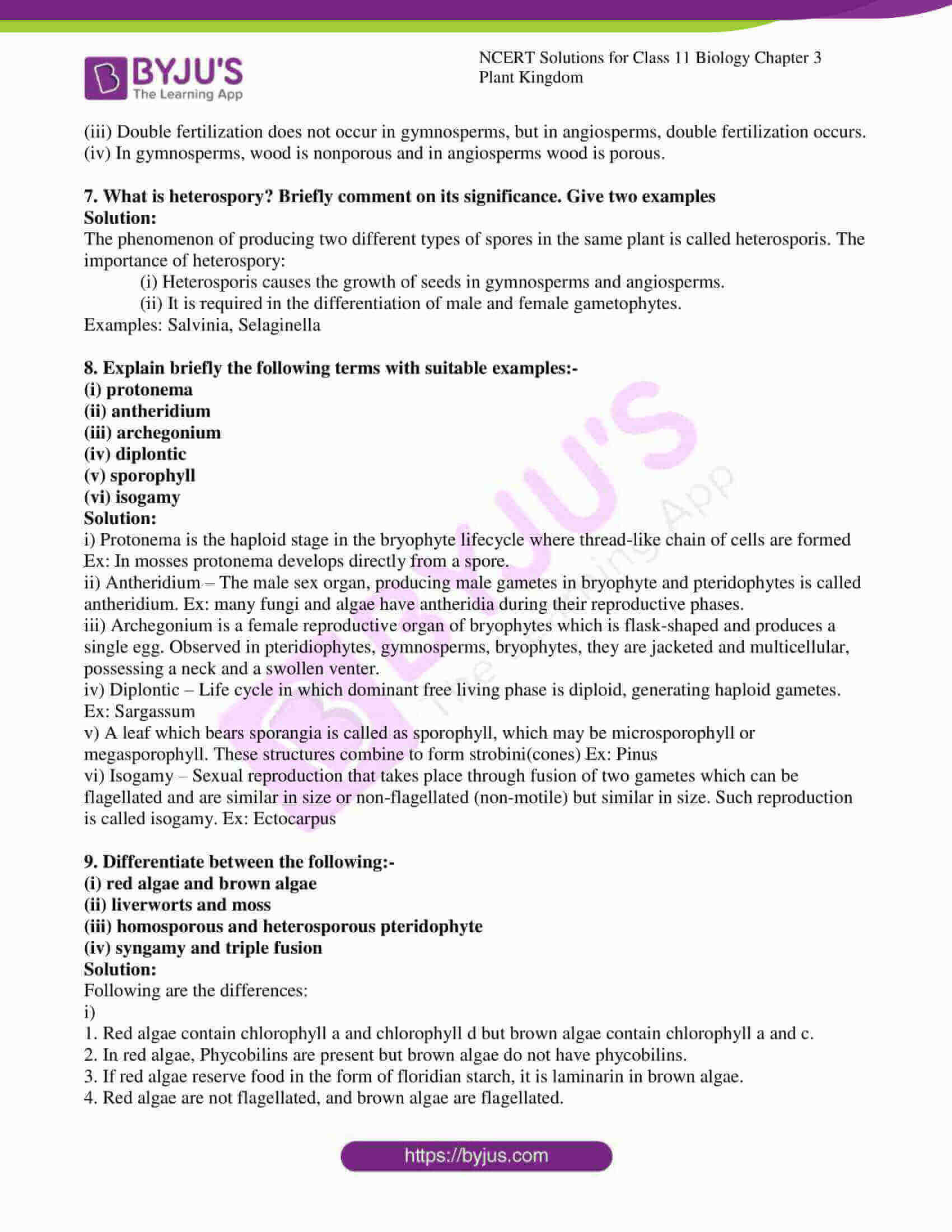 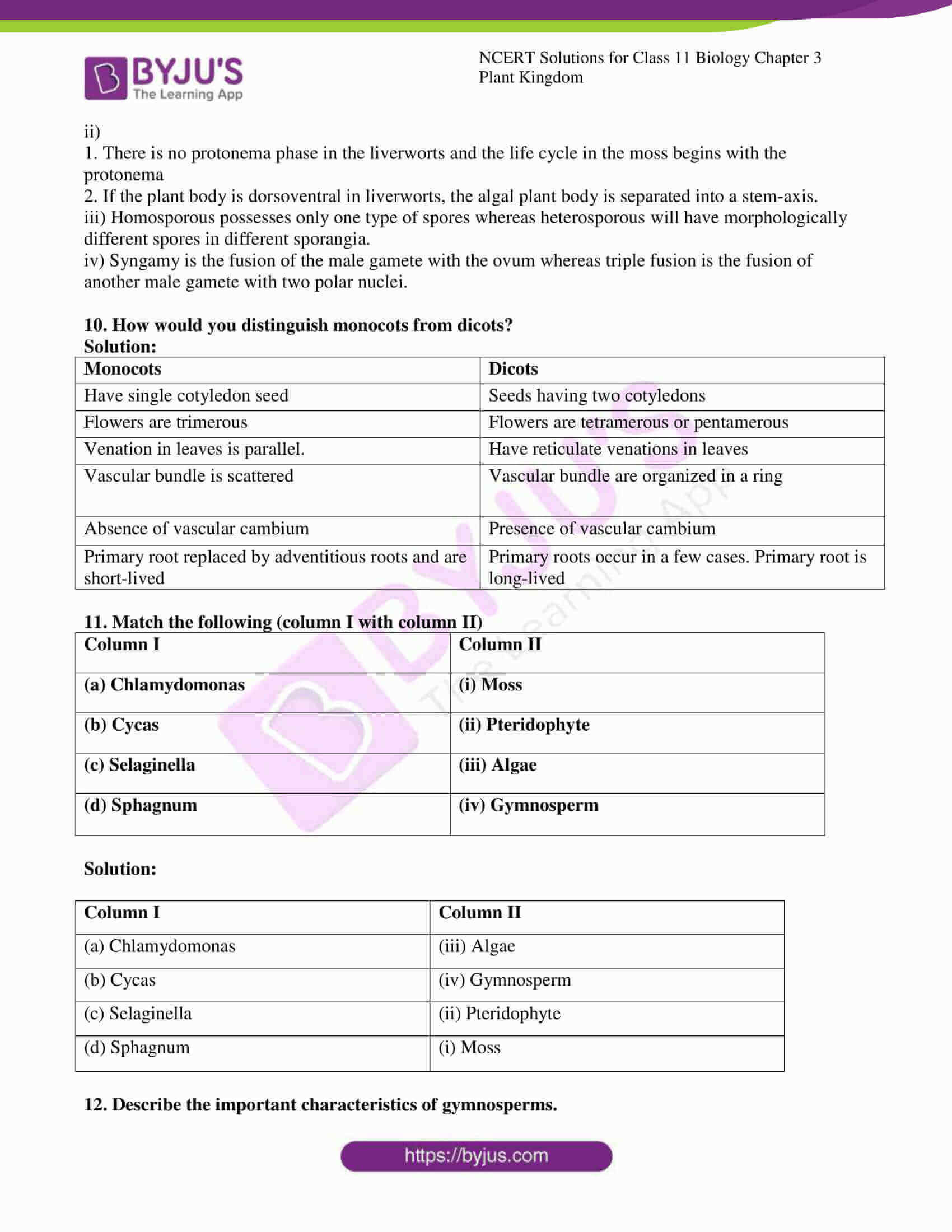 1. What is the basis of classification of algae?

The presence of pigments that give the traditional color on algae is the main basis for the classification of algae.

Now, algae are classified on different criteria such as:

2. When and where does reduction division take place in the life cycle of a liverwort, a moss, a fern, a gymnosperm and an angiosperm?

The reduction division takes place in the following stages:

(ii) Moss – meiosis occurs in spore mother cells of spore sacs in the capsule of sporangium.

(iii) Fern – sporangia are endured on sporophylls (fertile leaves). The process of meiosis occurs in spore mother cells of sporangium for the formation of haploid spores.

(iv) Gymnosperm – meiosis occurs in microsporangia located in the microsporophylls, in the microspore mother cells for the formation of haploid pollen grains giving rise to male gametophyte

3. Name three groups of plants that bear archegonia. Briefly describe the life cycle of any one of them.

Bryophytes, Pteridophytes, and Gymnosperms are the plants that bear archegonia.

The life cycle of Bryophytes

(iv) An antherozoid fuses with the egg to produce the zygote.

4. Mention the ploidy of the following:

5. Write a note on economic importance of algae and gymnosperms.

(i) Gymnosperms plants are used as ornamentals. Some are features in formal gardens – used for bonsai

(ii) Their fibers are used in the preparation of paper pulp.

(iii) Turpentine and resins are obtained from confers resin

(v) Gymnosperm seeds are used as food products such as bakery items.

(vi) Occassionaly used to create silk and other textiles

(i) Algae fixes Carbon dioxide with the help of photosynthesis

(iii) They produce rich compounds that serve as food for aquatic animals.

(vi) Agar is used in growing microorganisms and in the preparation of jellies.

(vii) Chlorella is used as food by space travelers.

6. Both gymnosperms and angiosperms bear seeds, then why are they classified separately?

The reasons for distinguishing angiosperms and gymnosperms are as follows.

(i) In gymnosperms, the ovules are naked but in angiosperms they are enclosed within the ovary

(iv) In gymnosperms, wood is nonporous and in angiosperms wood is porous.

7. What is heterospory? Briefly comment on its significance. Give two examples

The phenomenon of producing two different types of spores in the same plant is called heterosporis. The importance of heterospory:

(i) Heterosporis causes the growth of seeds in gymnosperms and angiosperms.

(ii) It is required in the differentiation of male and female gametophytes.

i) Protonema is the haploid stage in the bryophyte lifecycle where thread-like chain of cells are formed Ex: In mosses protonema develops directly from a spore.

ii) Antheridium – The male sex organ, producing male gametes in bryophyte and pteridophytes is called antheridium. Ex: many fungi and algae have antheridia during their reproductive phases.

iii) Archegonium is a female reproductive organ of bryophytes which is flask-shaped and produces a single egg. Observed in pteridiophytes, gymnosperms, bryophytes, they are jacketed and multicellular, possessing a neck and a swollen venter.

v) A leaf which bears sporangia is called as sporophyll, which may be microsporophyll or megasporophyll. These structures combine to form strobini(cones) Ex: Pinus

9. Differentiate between the following:-

(i) red algae and brown algae

Following are the differences:

2. In red algae, Phycobilins are present but brown algae do not have phycobilins.

3. If red algae reserve food in the form of floridian starch, it is laminarin in brown algae.

1. There is no protonema phase in the liverworts and the life cycle in the moss begins with the protonema

iii) Homosporous possesses only one type of spores whereas heterosporous will have morphologically different spores in different sporangia.

10. How would you distinguish monocots from dicots?

11. Match the following (column I with column II)

12. Describe the important characteristics of gymnosperms.

The main characteristics of gymnosperms are as follows

(i) In Gymnosperm the ovules are not enclosed by ovary. They are exposed before and after fertilization.

(ii) The seeds are naked

(iv) The roots are taproots

(v) The stems are branched or unbranched.

(vii) The plant body is separated into roots, stems and leaves and is sporophyte

(viii) They produce two kinds of spores, so they are called heterosporous

(ix) Fertilization takes place in the absence of external water from syphonogamy.

NCERT Solutions for Class 11 Biology Chapter 3 Plant kingdom is categorized under Unit 1 Diversity in the Living World of term – I CBSE Syllabus 2021-22. As per previous years’ question papers, this unit alone carries around 7-8 marks. Revision of this chapter thoroughly can help students fetch all the marks allotted for this chapter.

The chapter Plant kingdom discusses the kingdom in detail. It includes algae, bryophytes, pteridophytes, angiosperms and gymnosperms. The different species are discussed in detail providing students information extensively on habitat, lifecycle, etc. It enlightens students with a detailed classification of the Plantae kingdom further which is popularly known as the plant kingdom.

Explain the economic importance of algae from Chapter 3 of NCERT Solutions for Class 11 Biology.

The economic importance of algae from Chapter 3 of NCERT Solutions for Class 11 Biology are –
1. Carbon dioxide is fixed by algae with the help of photosynthesis.
2. The level of dissolved oxygen in the intermediate environment is increased by algae.
3. Rich compounds are produced by algae which serve as food for aquatic animals.
4. Sargassum and Laminaria are used as food.
5. Few algae are used as hydrocolloids.
6. Agar is used in preparation of jellies and in growing microorganisms.
7. Space travellers make use of Chlorella as food.


What is the significance of heterospory discussed in Chapter 3 of NCERT Solutions for Class 11 Biology?

The phenomenon in which two different kinds of spores are produced in the same plant is known as heterospory. The significance of heterospory discussed in Chapter 3 of NCERT Solutions for Class 11 Biology are –
1. The development of seeds in angiosperms and gymnosperms is caused by heterospory.
2. Heterospory is important in the differentiation of female and male gametophytes.
Students can understand these concepts in a better way by referring to the NCERT Solutions from BYJU’S. The expert faculty design the solutions with the aim of helping students to score well in the Class 11 term – I exam without fear.

List out the concepts covered in Chapter 3 of NCERT Solutions for Class 11 Biology.