Apart from all the other benefits, NCERT Solutions enable students to understand and grasp the answering tactics to effectively answer in the second term examinations while keeping a track of time. The solutions are reviewed and evaluated thoroughly for its accuracy and preciseness so that the information provided does not digress from the central content. 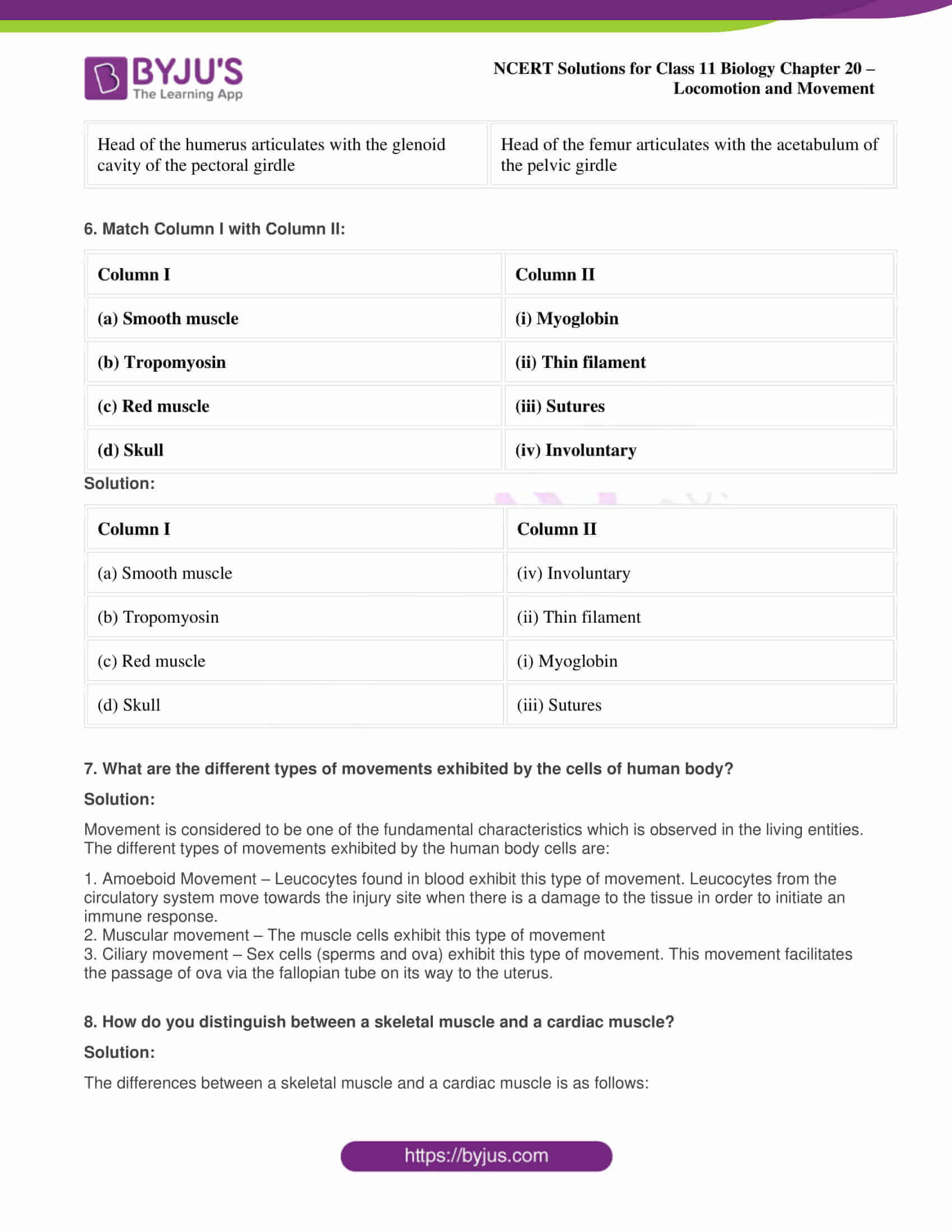 1. Draw the diagram of a sarcomere of skeletal muscle showing different regions.

The diagram below shows the sarcomere of skeletal muscle showing different regions: Sliding filament theory states that the muscle fibre contraction occurs due to the sliding of the thin filaments over thick filaments. 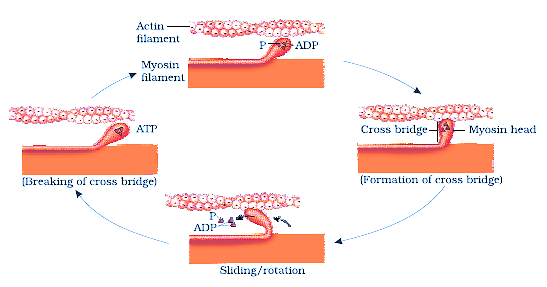 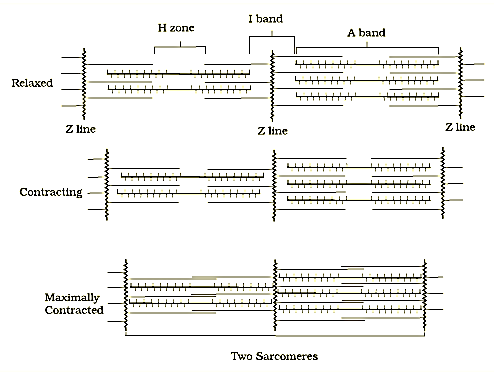 1. The central nervous system (CNS) sends a signal through a motor neuron which arrives at the neuromuscular junction or the motor end plate

2. The junction present between the sarcolemma of the muscle fiber and the motor neuron is called the neuromuscular junction

3. The release of a neurotransmitter called acetylcholine is triggered when the signal arrives at the neuromuscular junction. The action potential in the sarcolemma is set by this release.

1. The sarcolemma transmits the action potential to the sarcoplasmic reticulum in order to release the calcium ions in the sarcoplasm

1. The calcium ions that are released, tends to bind to the troponin and tropomyosin located on the active filaments

2. This linkage causes a modification in the three-dimensional structure of the actin-troponin-tropomyosin complex. The active site for myosin which is located on the actin filament is exposed.

1. The calcium ions release causes the myosin heads to get activated which inturn causes the release of energy in the form of ATP

2. Hydrolysis of ATP releases energy which causes the binding of myosin heads to the active sites found on the actin filaments hence forming a cross-bridge

1. The myosin head rotates due to the formation of cross-bridge, pulling the actin filaments to the centre of the A-band which is the H-zone

2. The z-line which is attached to the actin filaments is pulled inwards too

3. Contraction of sarcomere occurs when the actin filaments are pulled in the opposite ends

4. During the process of contraction, the I-band shortens whereas the A-band maintains its length causing the muscles to contract.

4. Write true or false. If false change the statement so that it is true.

(a) Actin is present in thin filament

(b) H-zone of striated muscle fibre represents both thick and thin filaments.

(e) Sternum is present on the ventral side of the body.

(a) Actin is present in thin filament – True

Corrected statement: There are 12 pairs of ribs in man.

5. Write the difference between:

(a) Actin and Myosin

(b) Red and White muscles

a) Actin and myosin

b) Red and white muscles

6. Match Column I with Column II:

7. What are the different types of movements exhibited by the cells of human body?

Movement is considered to be one of the fundamental characteristics which is observed in the living entities. The different types of movements exhibited by the human body cells are:

1. Amoeboid Movement – Leucocytes found in blood exhibit this type of movement. Leucocytes from the circulatory system move towards the injury site when there is a damage to the tissue in order to initiate an immune response.

2. Muscular movement – The muscle cells exhibit this type of movement

3. Ciliary movement – Sex cells (sperms and ova) exhibit this type of movement. This movement facilitates the passage of ova via the fallopian tube on its way to the uterus.

8. How do you distinguish between a skeletal muscle and a cardiac muscle?

The differences between a skeletal muscle and a cardiac muscle is as follows:

9. Name the type of joint between the following:-

(f) Between pubic bones in the pelvic girdle

The types of joints are as follows:

(b) carpal/metacarpal of thumb – Saddle joint

(f) Between pubic bones in the pelvic girdle – cartilaginous joint

List of subtopics covered in Chapter 20 – Locomotion and Movement

Movement is one of the significant features of living beings. Plants and animals exhibit a wide range of movements. Locomotion is a voluntary movement. Organisms move for different purposes, in search of food, shelter, away from predators, etc. Animals vary in the methods of their locomotion. The chapter of the term – II CBSE Syllabus (2021-22) briefs about the different structures used for locomotion, their mechanism, the skeletal system, joints, the various disorders of the skeletal system, and the muscular system.

Explain the types of movements exhibited by the cells of the human body in the Chapter 20 of NCERT Solutions for Class 11 Biology.

What topics/subtopics are covered in the Chapter 20 of NCERT Solutions for Class 11 Biology?

Are the NCERT Solutions for Class 11 Biology Chapter 20 from BYJU’S sufficient for the term – II exam preparation?

The NCERT Solutions for Class 11 Biology Chapter 20 from BYJU’S are framed based on the textbook content. The concepts are explained in a simple and understandable language to help students grasp them faster. Relevant analogies are used wherever required to boost the second term exam preparation of students. Neatly labelled diagrams for each concept are created to involve students in visual learning. Tables and pointers are used wherever necessary to help students learn new concepts effortlessly. The NCERT Solutions from BYJU’S not only help students with their second term exam preparation but also improves confidence to appear for various competitive exams like JEE, NEET etc.