It is mandatory for the students to solve these exemplar questions in order to understand the topic from the exam point of view and to score good marks in CBSE Class 12 board exams and graduate entrance examinations. 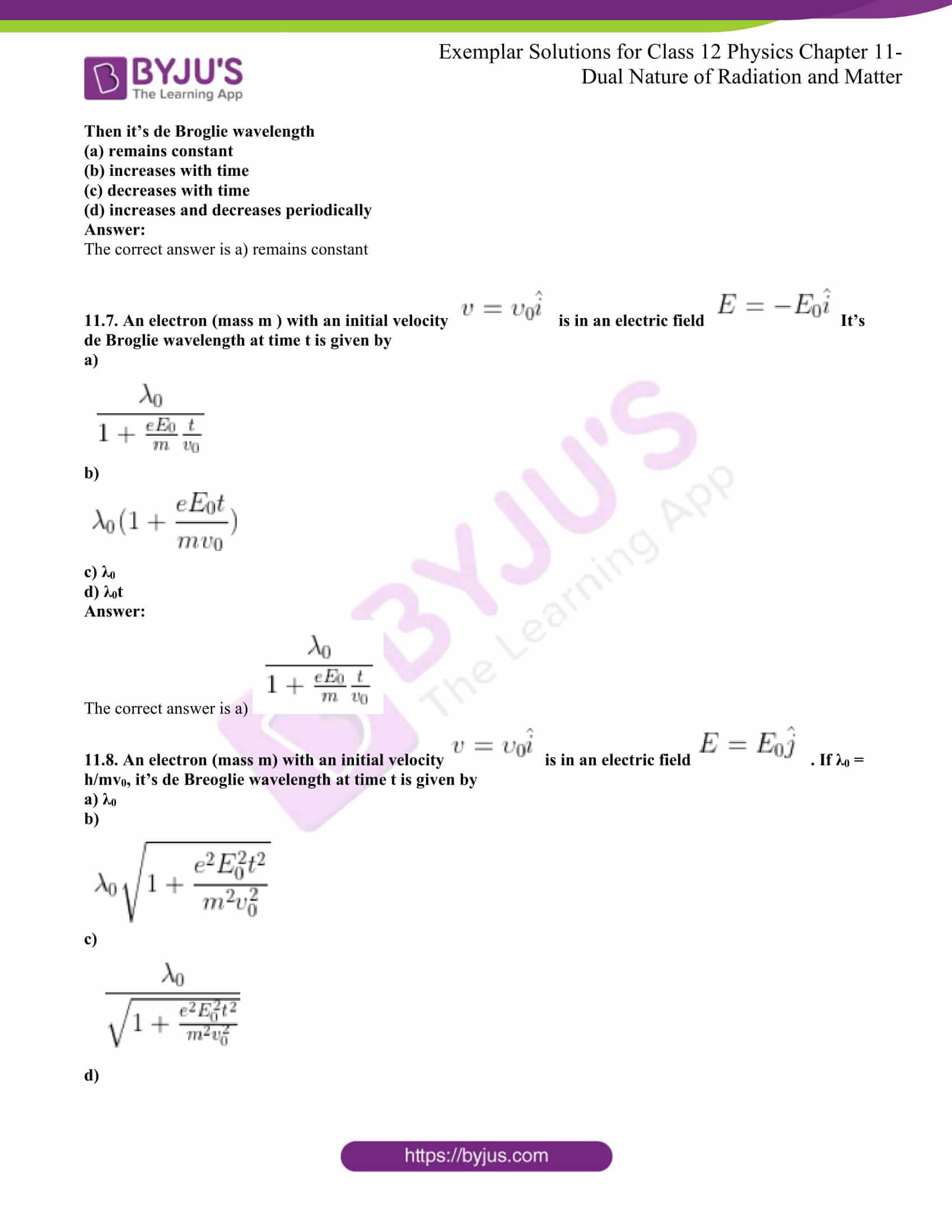 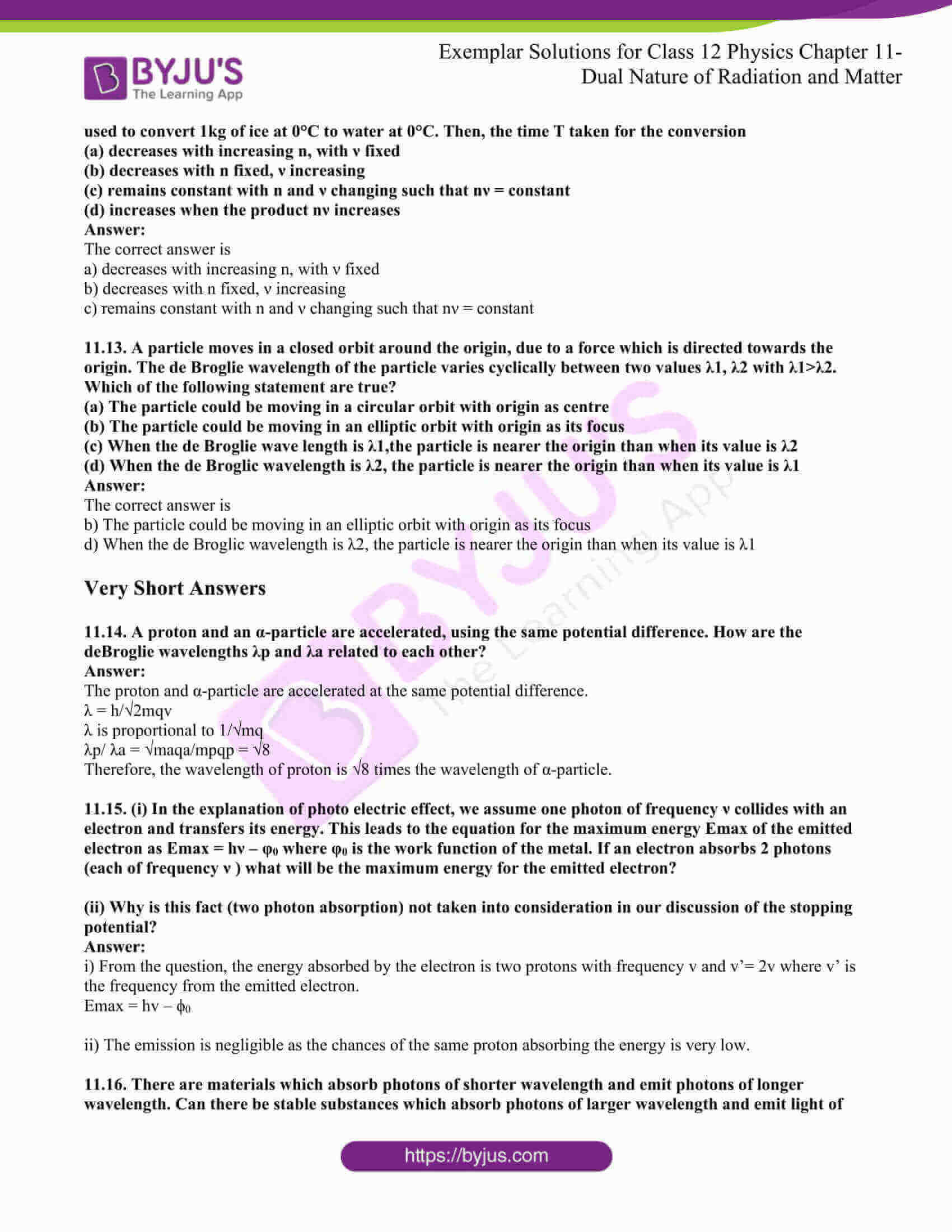 11.1. A particle is dropped from a height H. The de Broglie wavelength of the particle as a function of height is proportional to

11.2. The wavelength of a photon needed to remove a proton from a nucleus which is bound to the nucleus with 1 MeV energy is nearly

11.3. Consider a beam of electrons (each electron with energy E0) incident on a metal surface kept in an evacuated chamber. Then

(b) electrons can be emitted but all with an energy, E0

(c) electrons can be emitted with any energy, with a maximum of E0 – φ (φ is the work function)

(d) electrons can be emitted with any energy, with a maximum of E0

The correct answer is d) electrons can be emitted with any energy, with a maximum of E0

11.4. Consider Fig. 11.7 in the NCERT textbook of physics for Class XII. Suppose the voltage applied to A is increased. The diffracted beam will have the maximum at a value of θ that

(a) will be larger than the earlier value

(b) will be the same as the earlier value

(c) will be less than the earlier value

(d) will depend on the target

11.5. A proton, a neutron, an electron and an α-particle have the same energy. Then their de Broglie wavelengths compare as

11.6. An electron is moving with an initial velocity

and is in a magnetic field

(b) increases with time

The correct answer is a) remains constant

is in an electric field

It’s de Broglie wavelength at time t is given by

The correct answer is a)

11.8. An electron (mass m) with an initial velocity

is in an electric field

The correct answer is c)

(a) their momenta are the same

(b) their energies are the same

a) their momenta are the same

11.12. Photons absorbed in matter are converted to heat. A source emitting n photon/sec of frequency ν is used to convert 1kg of ice at 0°C to water at 0°C. Then, the time T taken for the conversion

(a) decreases with increasing n, with ν fixed

a) decreases with increasing n, with ν fixed

11.13. A particle moves in a closed orbit around the origin, due to a force which is directed towards the origin. The de Broglie wavelength of the particle varies cyclically between two values λ1, λ2 with λ1>λ2. Which of the following statement are true?

(c) When the de Broglie wavelength is λ1, the particle is nearer the origin than when its value is λ2

(d) When the de Broglie wavelength is λ2, the particle is nearer the origin than when its value is λ1

d) When the de Broglie wavelength is λ2, the particle is nearer the origin than when its value is λ1

11.14. A proton and an α-particle are accelerated, using the same potential difference. How are the de Broglie wavelengths λp and λa related to each other?

The proton and α-particle are accelerated at the same potential difference.

λ is proportional to 1/√mq

11.15. (i) In the explanation of the photoelectric effect, we assume one photon of frequency ν collides with an electron and transfers its energy. This leads to the equation for the maximum energy Emax of the emitted electron as Emax = hν – φ0 where φ0 is the work function of the metal. If an electron absorbs 2 photons (each of frequency ν ) what will be the maximum energy for the emitted electron?

(ii) Why is this fact (two-photon absorption) not taken into consideration in our discussion of the stopping potential?

i) From the question, the energy absorbed by the electron is two protons with frequency v and v’= 2v where v’ is the frequency from the emitted electron.

ii) The emission is negligible as the chances of the same proton absorbing the energy is very low.

The wavelength of the photon increases when the frequency decreases. There are two possible cases and they are; case one in which the photons have a smaller wavelength and the energy is consumed against work function. In case two, the photons might have a longer wavelength and emit photons with shorter and lesser energy.

11.17. Do all the electrons that absorb a photon come out as photoelectrons?

No, not all electrons that are absorbed as a photon come out as a photoelectron.

11.18. There are two sources of light, each emitting with a power of 100 W. One emits X-rays of wavelength 1nm and the other visible light at 500 nm. Find the ratio of a number of photons of X-rays to the photons of visible light of the given wavelength?

Let nx and nv be the no.of photons from x-rays and visible light are of equal energies and they emit 100 W power.

11.19. Consider the figure given for photoemission. How would you reconcile with momentum-conservation? Note light (photons) have momentum in a different direction than the emitted electrons. 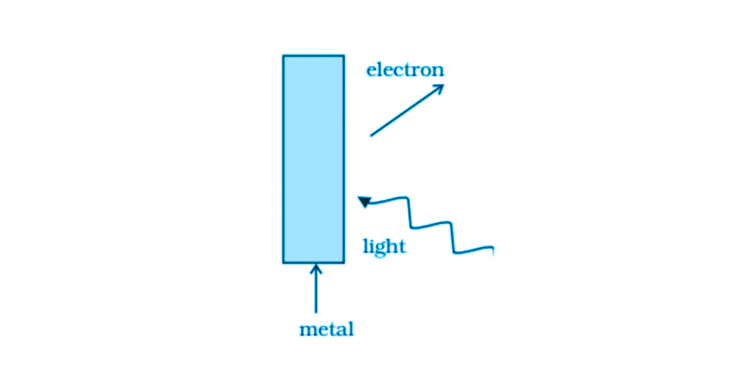 Let K1 and K2 be the maximum energy emitted by the electrons when 600 and 400 nm wavelength is used.

11.22. Two monochromatic beams A and B of equal intensity I, hit a screen. The number of photons hitting the screen by beam A is twice that by beam B. Then what inference can you make about their frequencies?

No.of photons hitting the screen by A is twice that of B

Energy from the beam A = hvA

Energy from the beam B = hvB

There are 4 possible cases and they are:

11.24. A neutron beam of energy E scatters from atoms on a surface with a spacing d = 0.1nm. The first maximum of intensity in the reflected beam occurs at θ = 30°. What is the kinetic energy E of the beam in eV?

The probability of emission of photoelectrons is 7.5 × 10-21

11.26. Consider an electron in front of the metallic surface at a distance d (treated as an infinite plane surface). Assume the force of attraction by the plate is given as 2 2 0 1 4 4 q πε d Calculate work in taking the charge to an infinite distance from the plate. Taking d = 0.1nm, find the work done in electron volts. [Such a force law is not valid for d < 0.1nm]. The figure shows that an electron is displaced slowly. The distance covered by the electron is x and this happens by the means of an external force

Therefore, work done by the external force is integral of force from d to infinity.

11.27. A student performs an experiment on the photoelectric effect, using two materials A and B. A plot of Vstop vs ν is given in the figure.

(i) Which material A or B has a higher work function?

(ii) Given the electric charge of an electron = 1.6 × 10–19 C, find the value of h obtained from the experiment for both A and B. Comment on whether it is consistent with Einstein’s theory 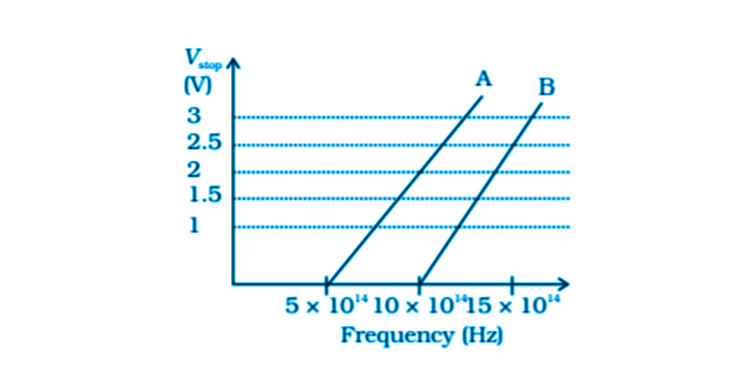 i) The threshold frequency of A is

The threshold frequency of B is

11.28. A particle A with a mass mA is moving with a velocity v and hits a particle B (mass mB) at rest (one dimensional motion). Find the change in the de Broglie wavelength of the particle A. Treat the collision as elastic.

According to the law of conservation of momentum,

11.29. Consider a 20 W bulb emitting light of wavelength 5000 A ° and shining on a metal surface kept at a distance 2m. Assume that the metal surface has work function of 2 eV and that each atom on the metal surface can be treated as a circular disk of radius 1.5 A ° .

(i) Estimate no. of photons emitted by the bulb per second. [Assume no other losses]

(ii) Will there be photoelectric emission?

(iii) How much time would be required by the atomic disk to receive energy equal to work function (2 eV)?

(iv) How many photons would atomic disk receive within time duration calculated in (iii) above?

(v) Can you explain how photoelectric effect was observed instantaneously?

No.of photon emitted per second by the bulb = n’ = dN/dt

iii) Time required by the atomic disk to receive energy is = 28.4 sec

v) Photoelectric emission is instantaneous as the collision time between the free electron and the incident photon is very less.

The dual nature of Radiation and Matter introduces students to the concept of matter that propagates through radiation. Under the close observation of a microscope, we can see that matter exists as both a wave as well as a particle.

Some of the major topics covered in this chapter are:

BYJU’S in India best learning app that provides study materials, notes, assignments, worksheets, videos and animations that help you memorise the topic for a longer period of time. For all your queries on CBSE Class 12 Physics topics, visit BYJU’S website or Download BYJU’S learning App for a customised learning experience.