NCERT Class 12 Physics exemplar for Chapter 14 Semiconductor Electronics: Materials, Devices and Simple Circuits provide here are written by experts after extensive research on every topic to provide apt and authentic information to the students. If you go through previous year question papers you will get a clear picture of questions on the exemplar book are directly asked in the examination. To score good marks, the students need to solve and get well versed with the exemplar questions and problems given in this exemplar book.

This NCERT class 12 Physics exemplar for Chapter 14 pdf present different varieties of questions like MCQ’S, fill in the blanks, match the following, true or false, short answer questions along with numerical problems, important formulas, exercises and assignments. This book helps you to understand the concepts clearly and help you to memorise the topic for a long period of time. 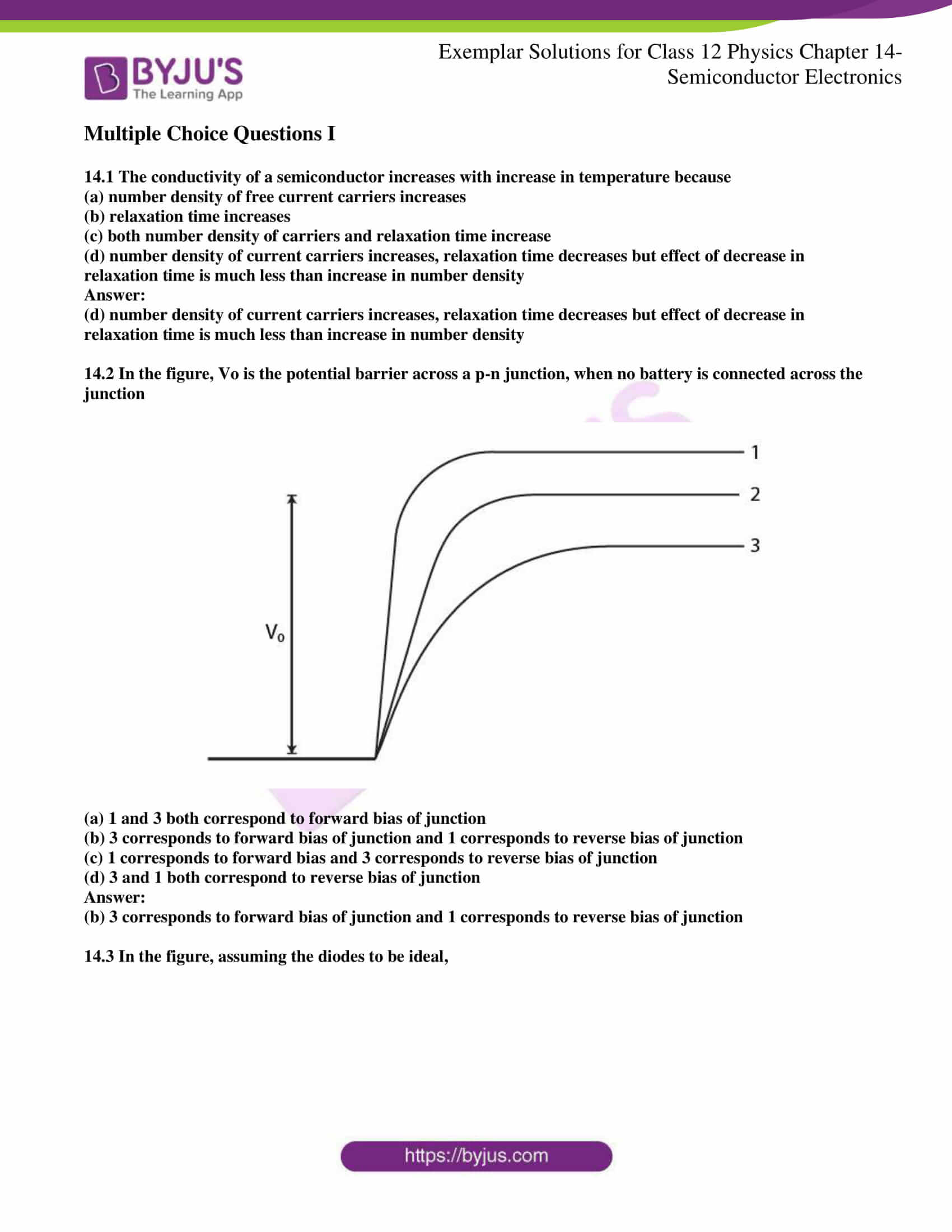 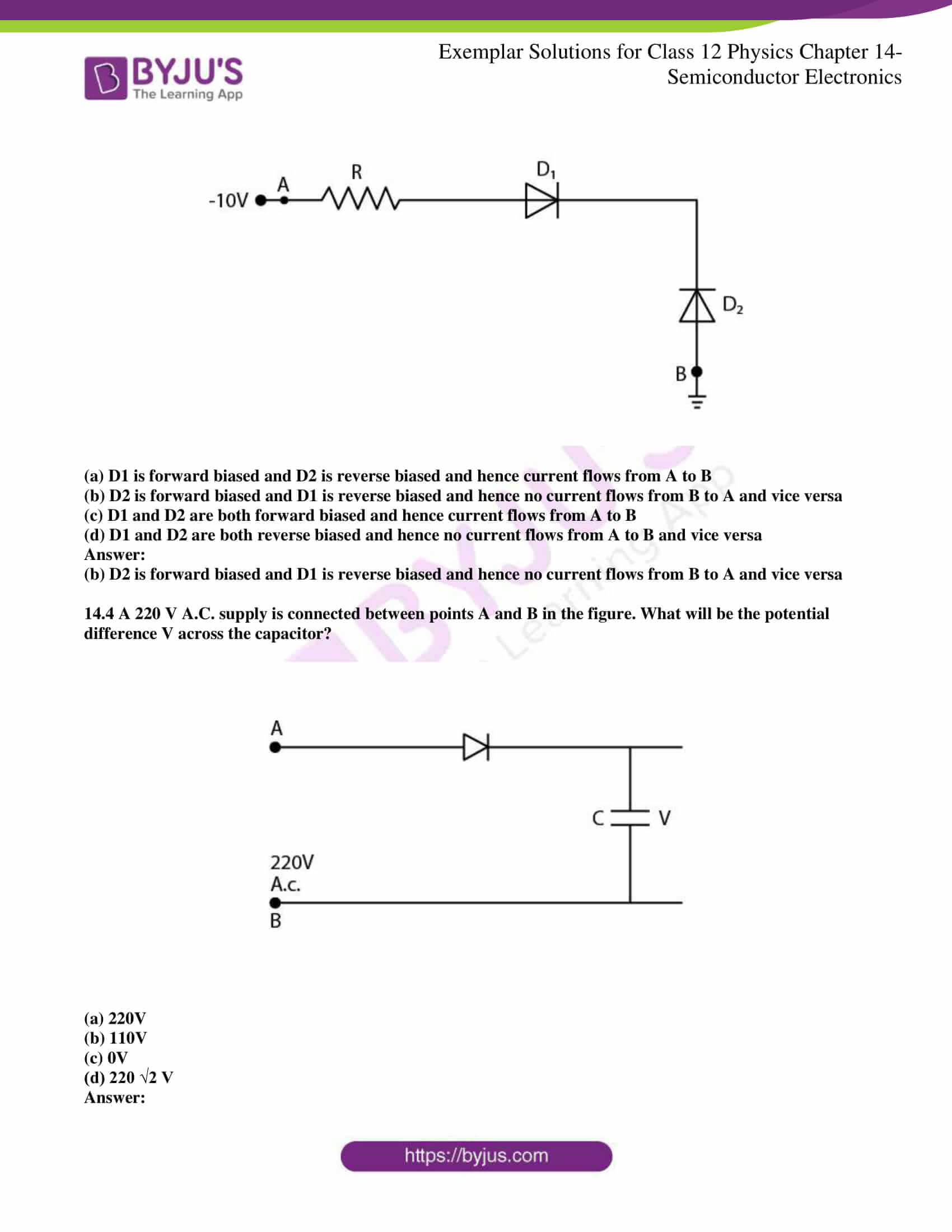 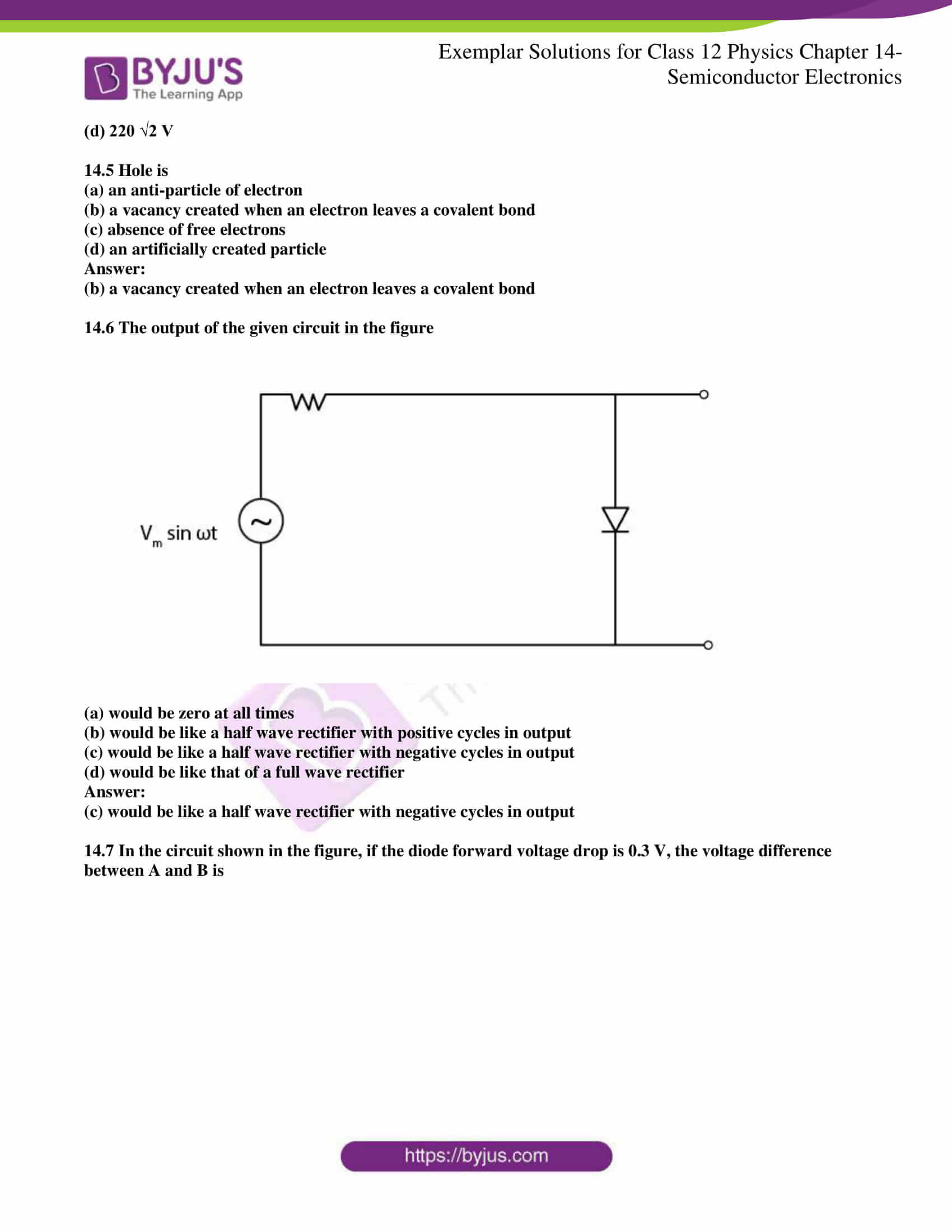 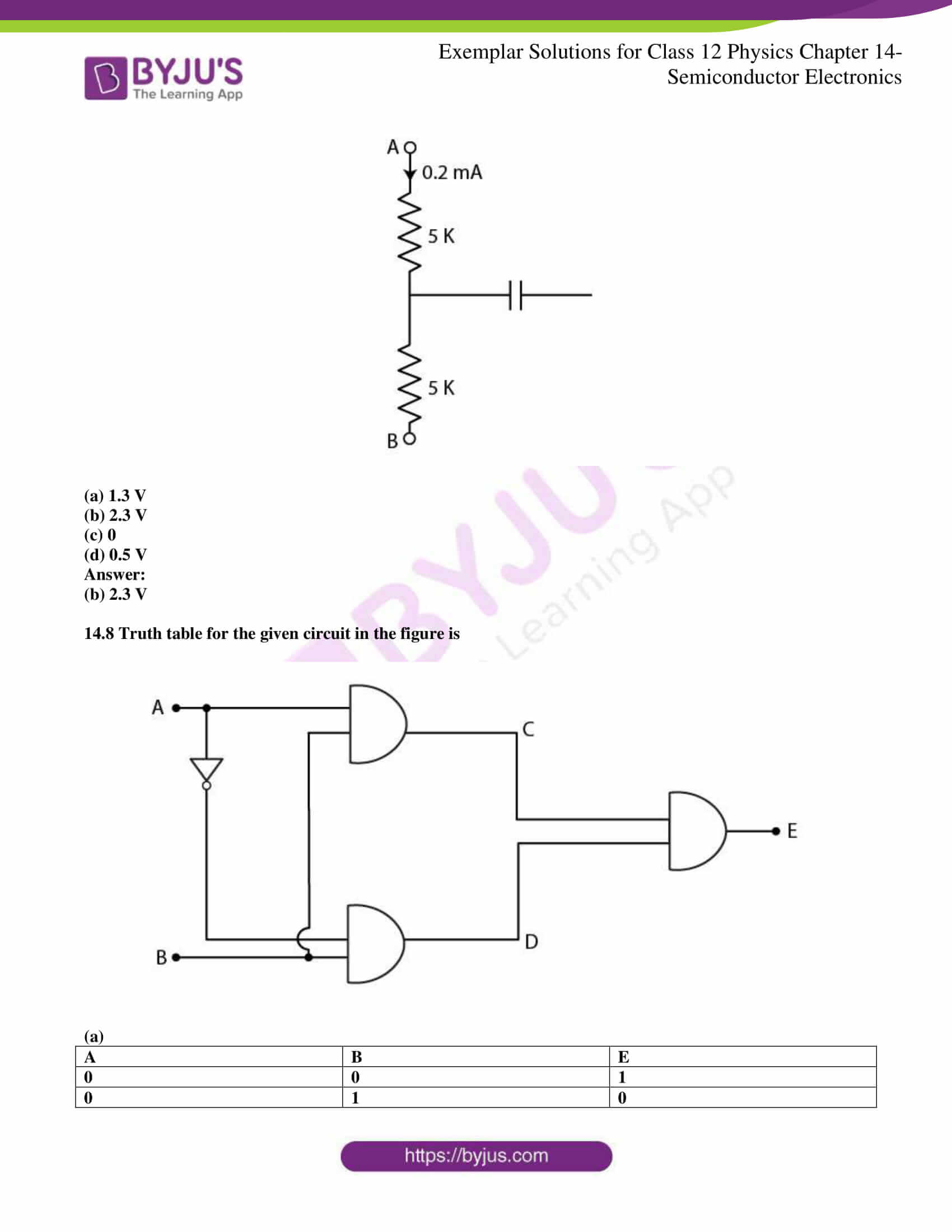 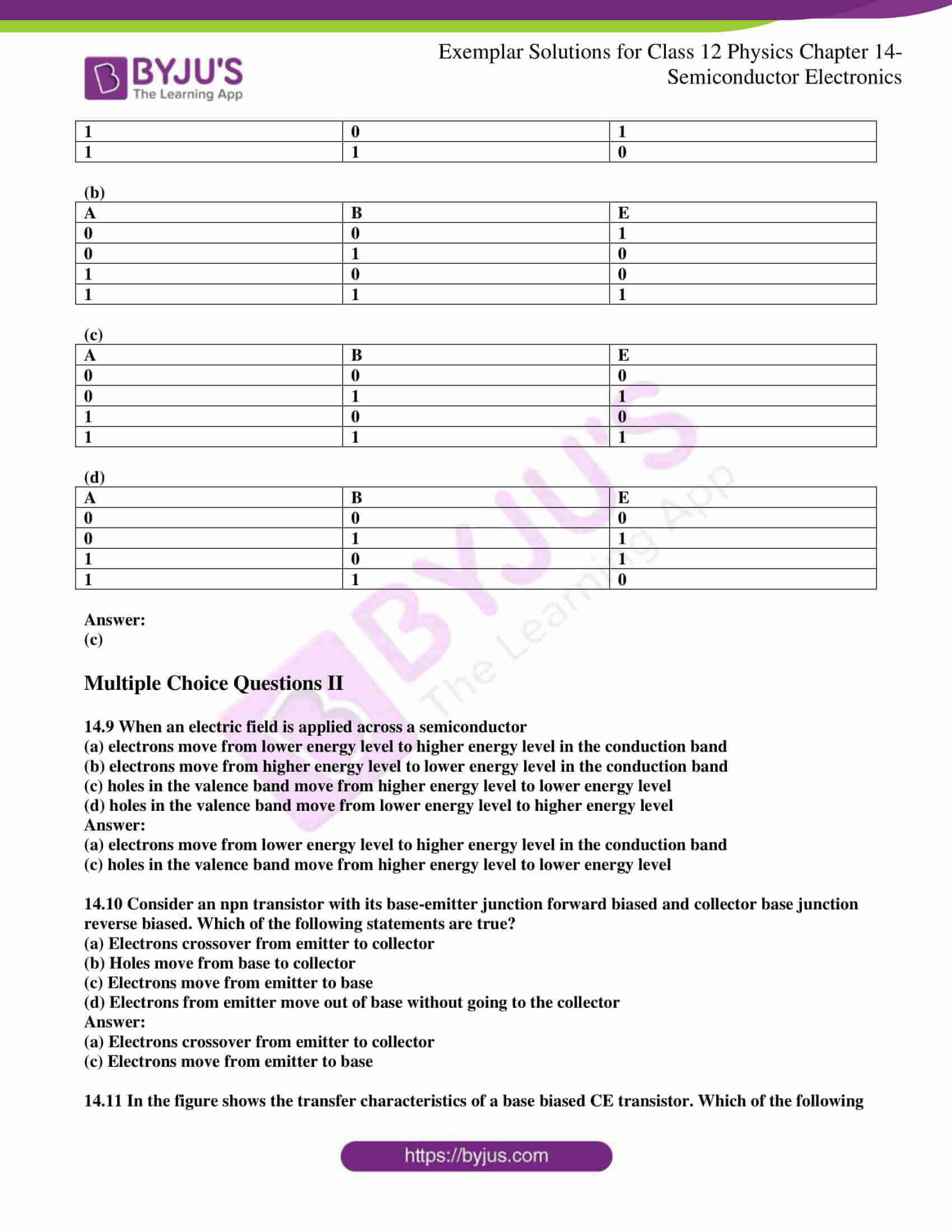 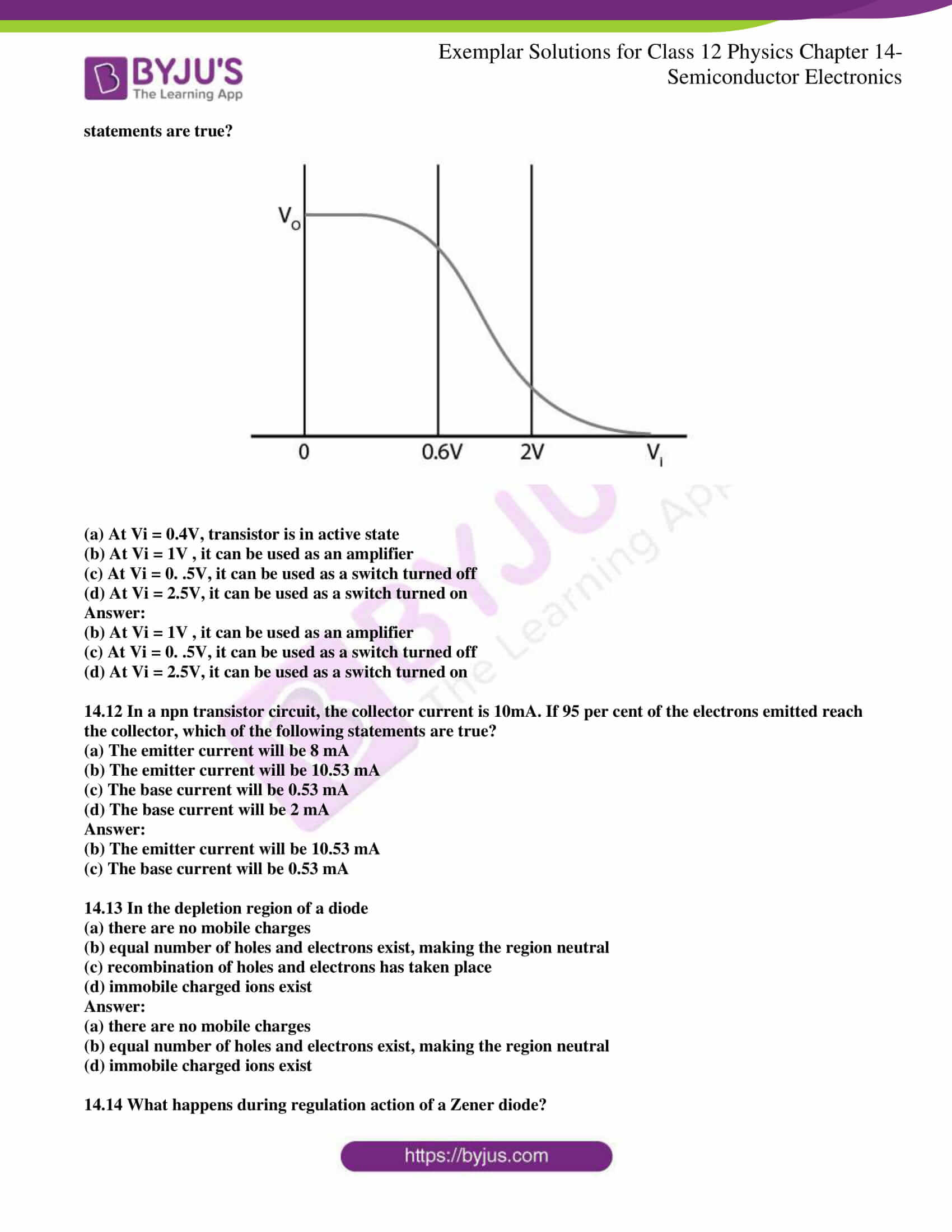 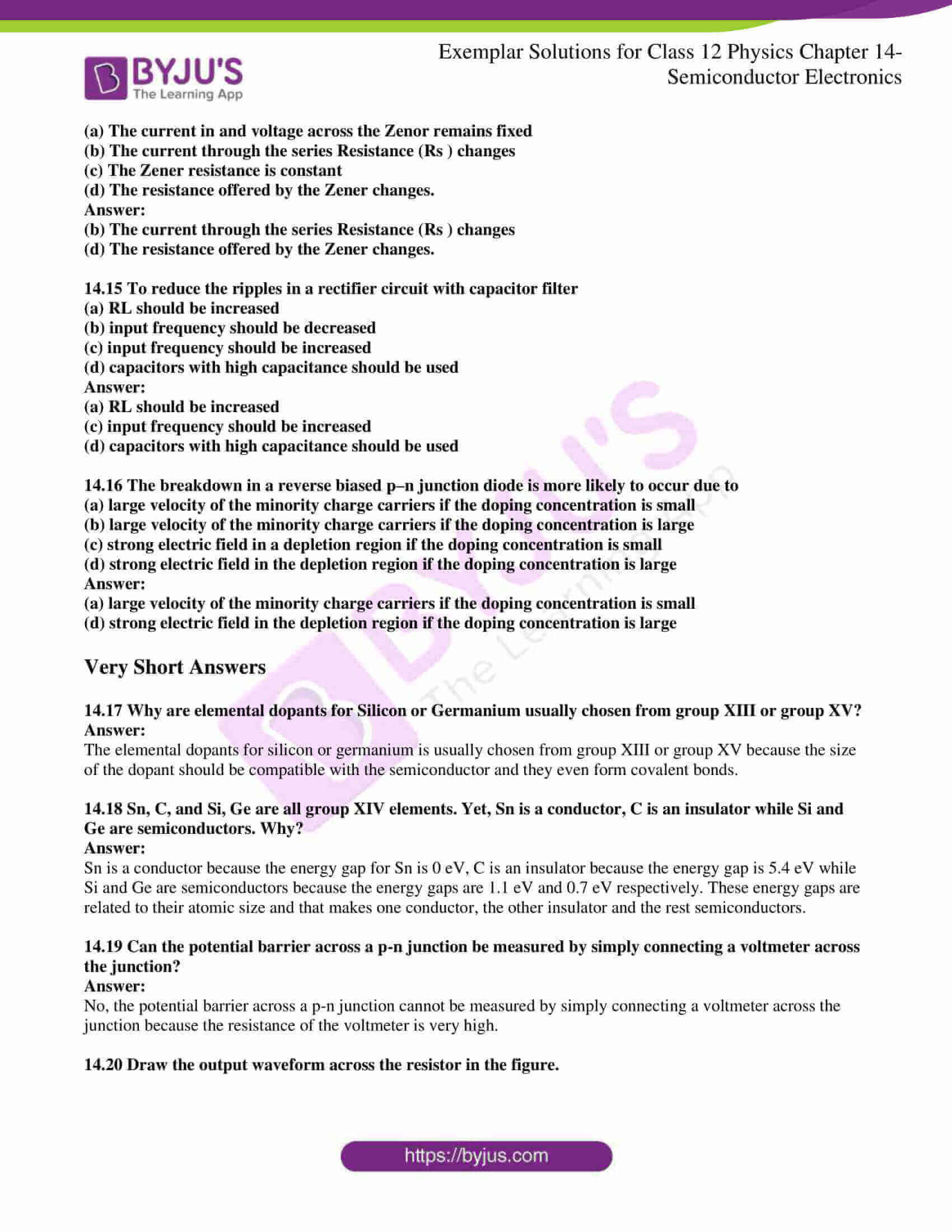 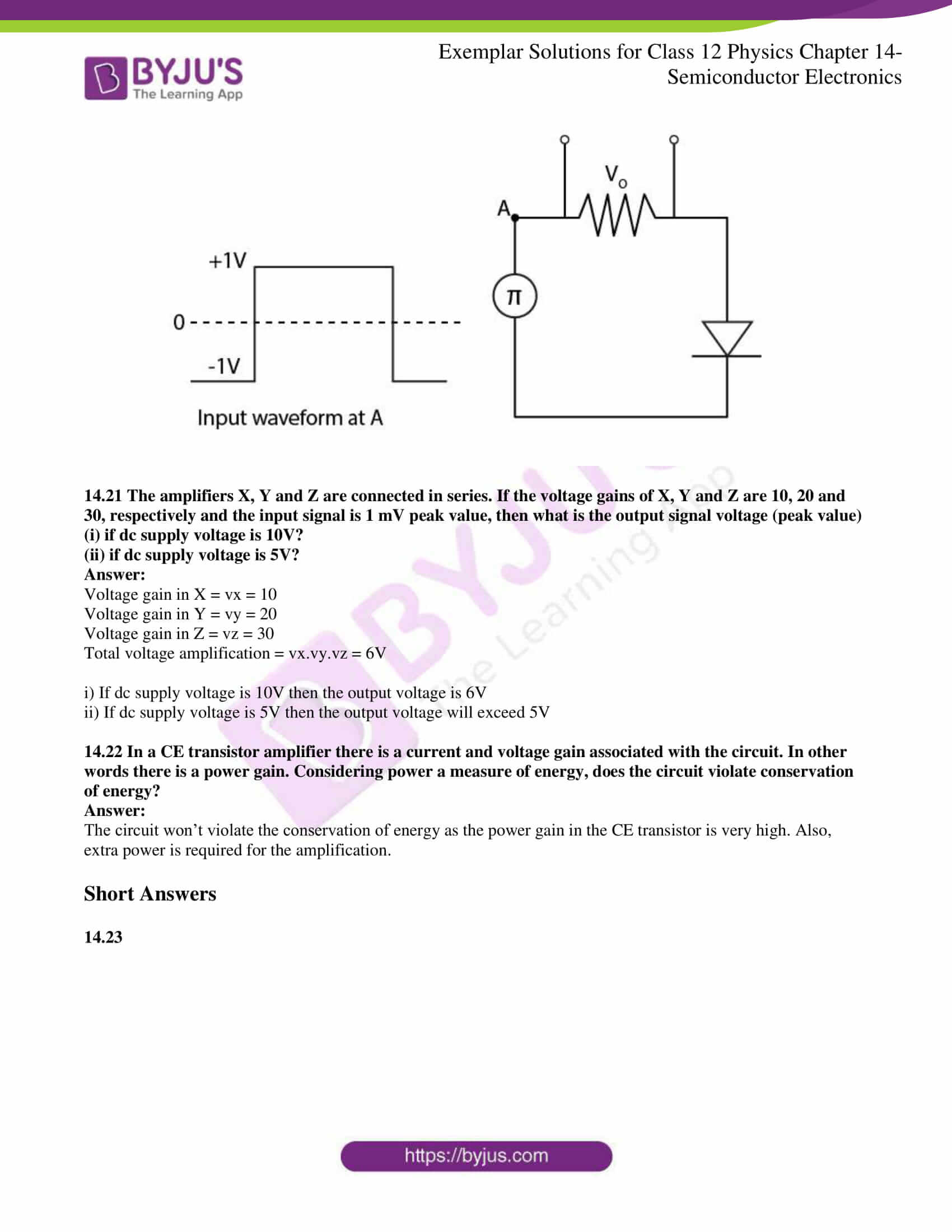 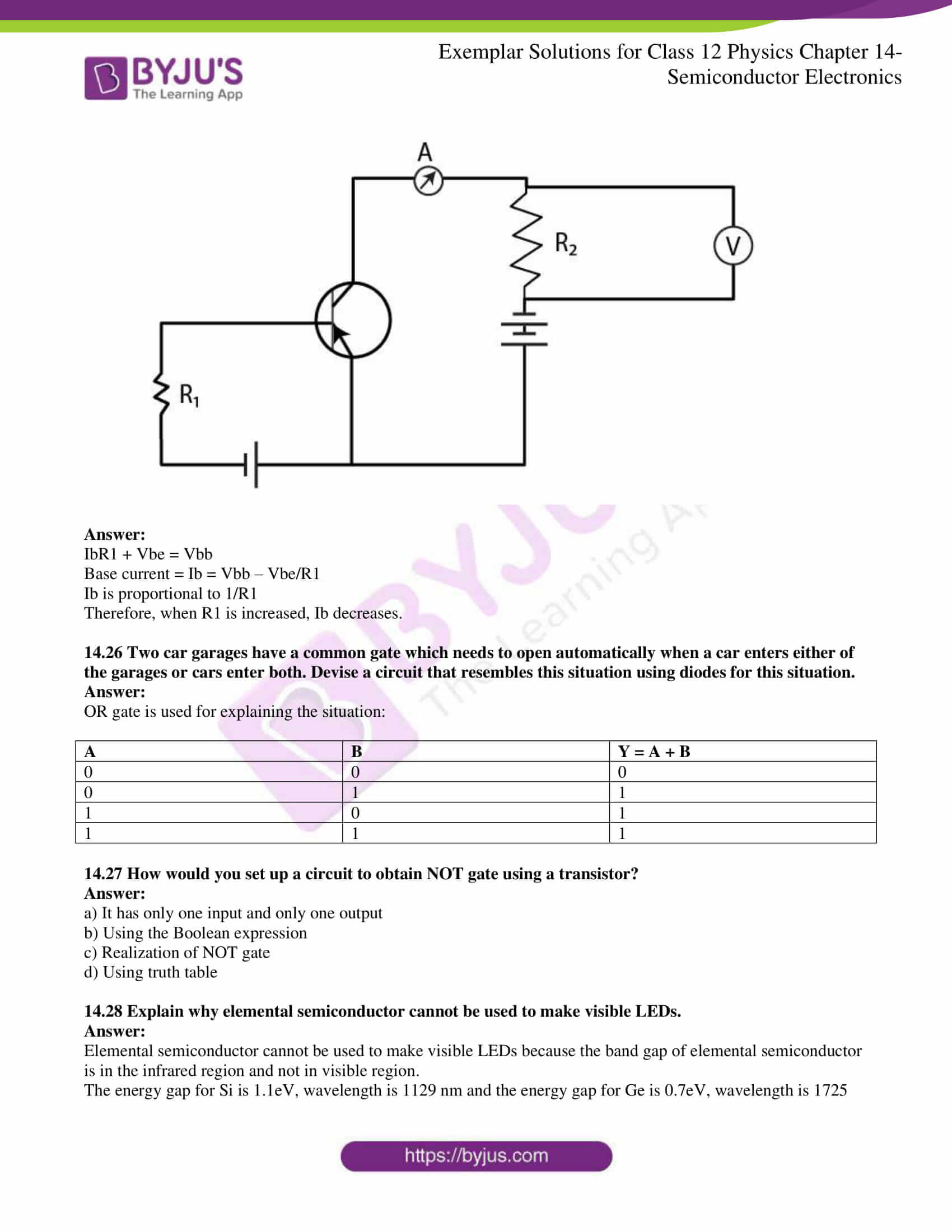 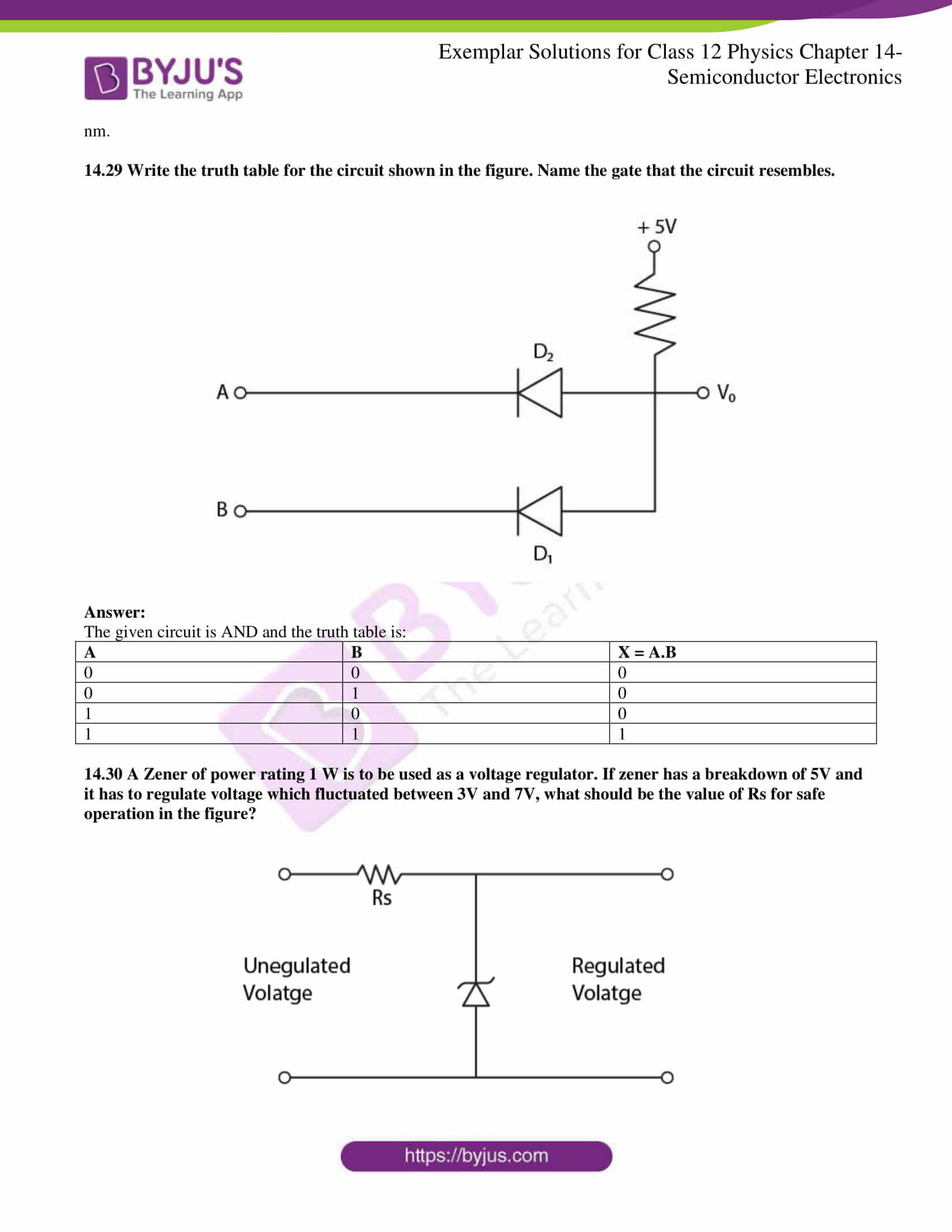 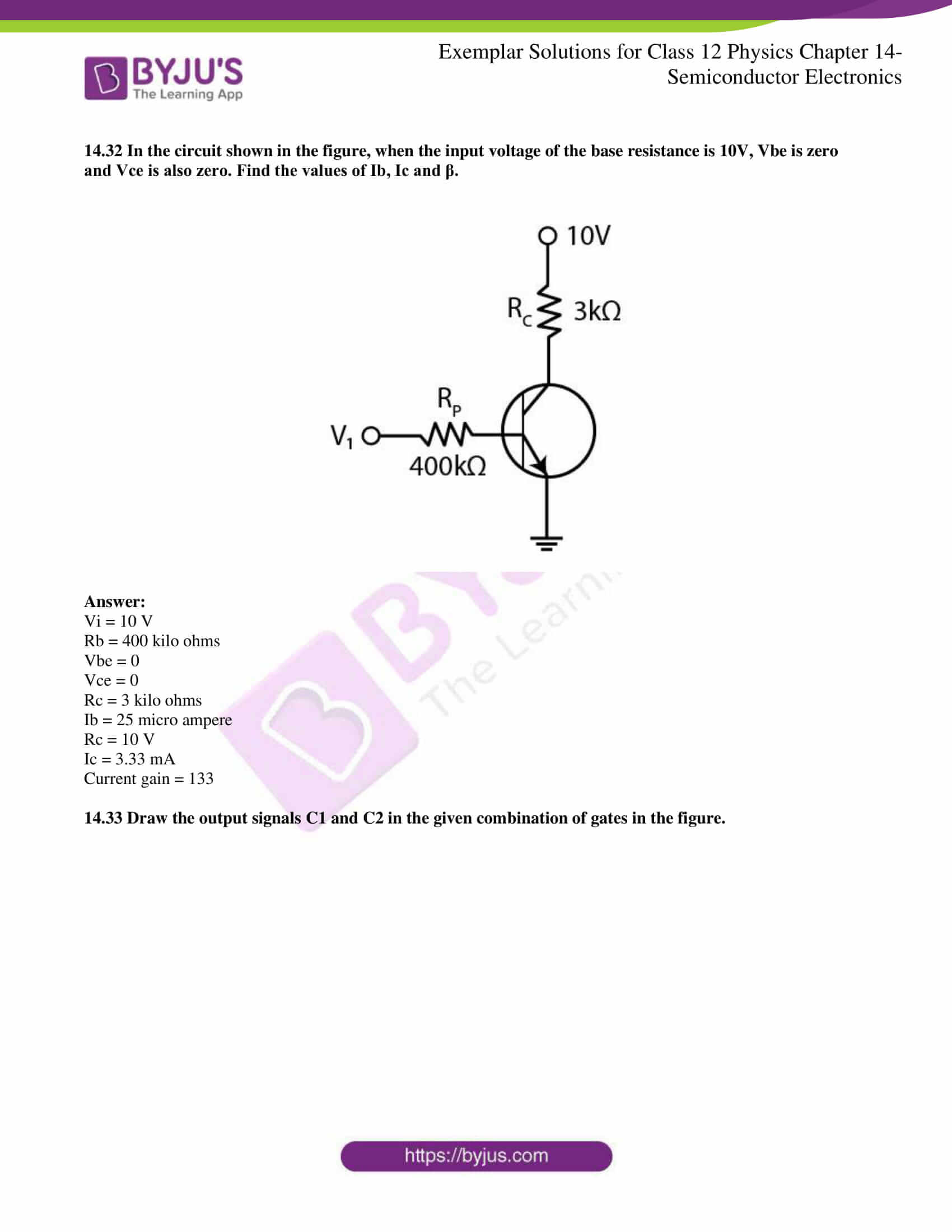 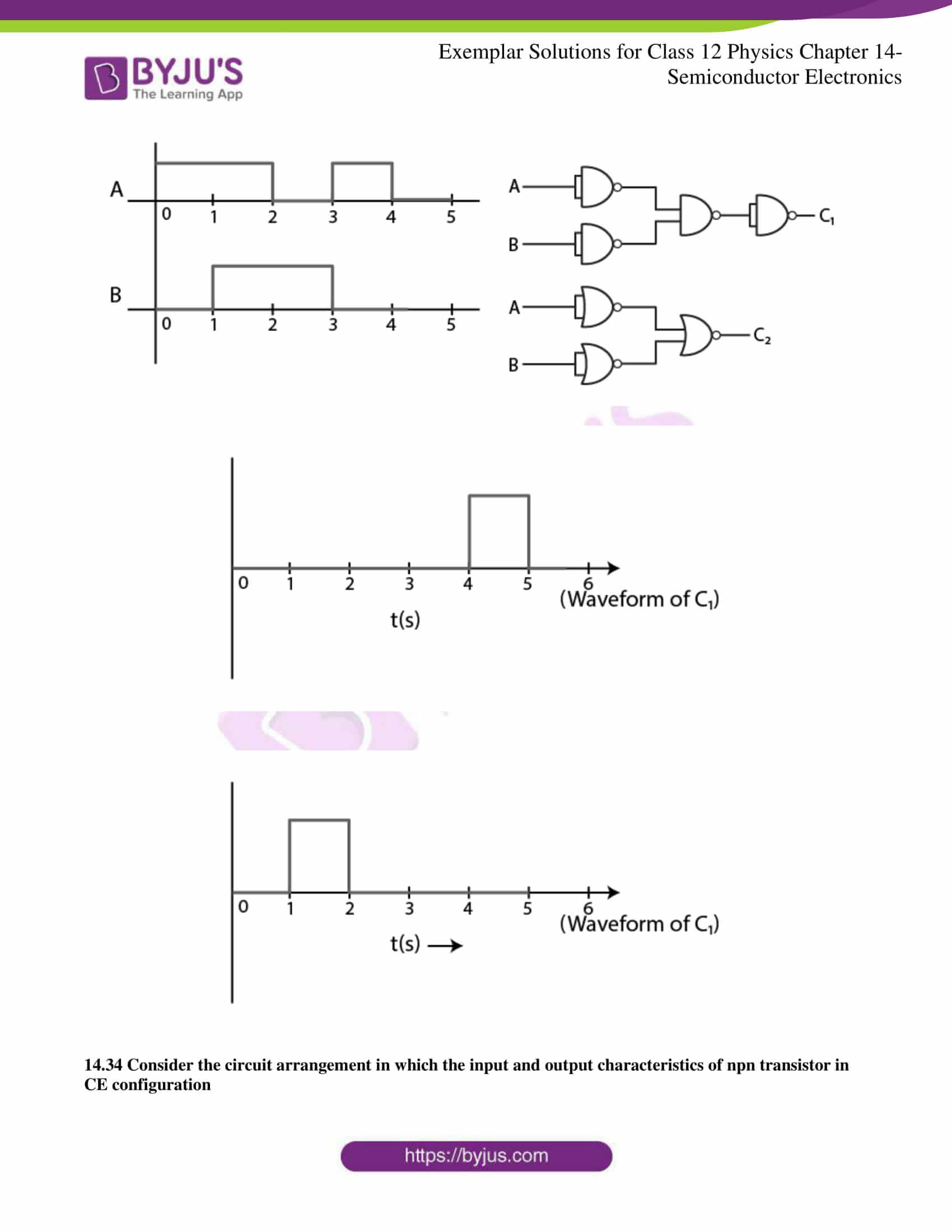 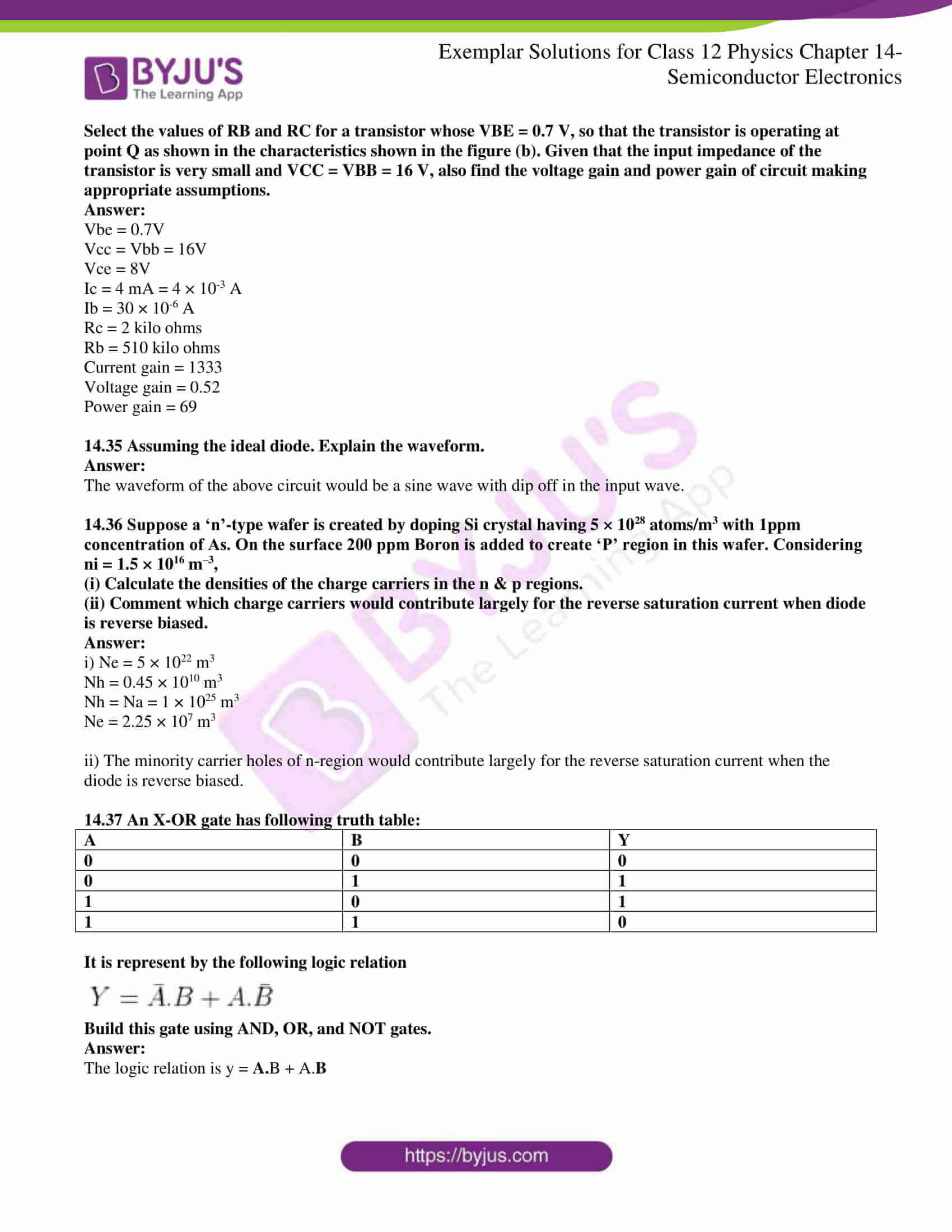 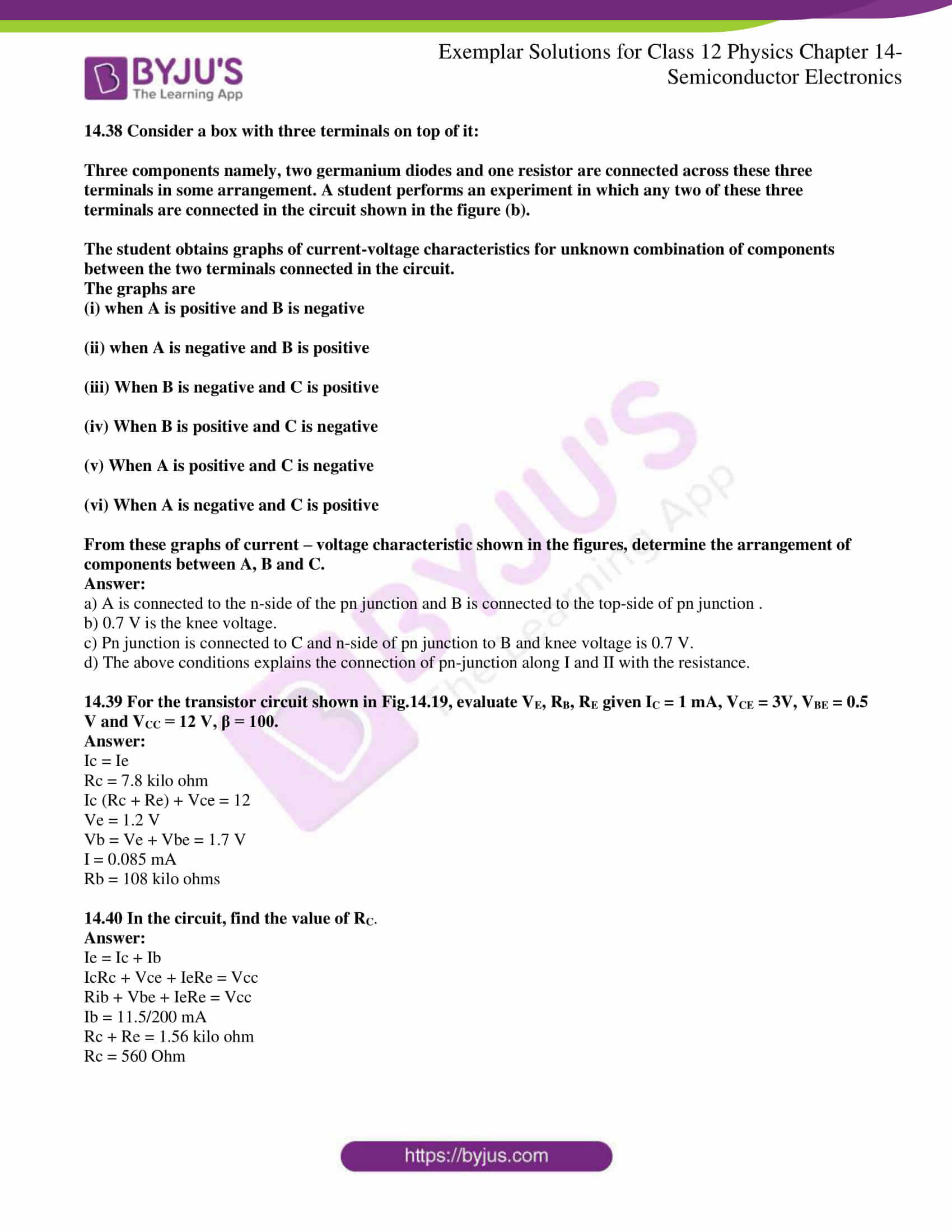 14.1 The conductivity of a semiconductor increases with increase in temperature because

(c) both number density of carriers and relaxation time increase

14.2 In the figure, Vo is the potential barrier across a p-n junction, when no battery is connected across the junction

(a) 1 and 3 both correspond to forward bias of junction

(d) 3 and 1 both correspond to reverse bias of junction

14.3 In the figure, assuming the diodes to be ideal,

14.4 A 220 V A.C. supply is connected between points A and B in the figure. What will be the potential difference V across the capacitor?

(a) an anti-particle of the electron

(b) a vacancy created when an electron leaves a covalent bond

(b) a vacancy created when an electron leaves a covalent bond

14.6 The output of the given circuit in the figure

(a) would be zero at all times

(d) would be like that of a full-wave rectifier

14.7 In the circuit shown in the figure, if the diode forward voltage drop is 0.3 V, the voltage difference between A and B is

14.8 Truth table for the given circuit in the figure is

14.9 When an electric field is applied across a semiconductor

14.10 Consider an NPN transistor with its base-emitter junction forward biased and collector-base junction reverse biased. Which of the following statements are true?

(a) Electrons crossover from emitter to collector

(b) Holes move from base to collector

(c) Electrons move from emitter to base

(a) Electrons crossover from emitter to collector

(c) Electrons move from emitter to base

14.11 In the figure shows the transfer characteristics of a base biased CE transistor. Which of the following statements are true?

14.12 In an NPN transistor circuit, the collector current is 10mA. If 95 per cent of the electrons emitted reaches the collector, which of the following statements are true?

(a) The emitter current will be 8 mA

14.13 In the depletion region of a diode

(a) there are no mobile charges

(b) equal number of holes and electrons exist, making the region neutral

(c) recombination of holes and electrons has taken place

(a) there are no mobile charges

(b) equal number of holes and electrons exist, making the region neutral

14.14 What happens during regulation action of a Zener diode?

(a) The current in and voltage across the Zenor remains fixed

(b) The current through the series Resistance (Rs ) changes

(c) The Zener resistance is constant

(d) The resistance offered by the Zener changes.

(b) The current through the series Resistance (Rs ) changes

(d) The resistance offered by the Zener changes.

14.15 To reduce the ripples in a rectifier circuit with capacitor filter

(a) RL should be increased

(b) input frequency should be decreased

(c) input frequency should be increased

(d) capacitors with high capacitance should be used

(a) RL should be increased

(c) input frequency should be increased

(d) capacitors with high capacitance should be used

14.16 The breakdown in a reverse-biased p–n junction diode is more likely to occur due to

14.17 Why are elemental dopants for Silicon or Germanium usually chosen from group XIII or group XV?

The elemental dopants for silicon or germanium is usually chosen from group XIII or group XV because the size of the dopant should be compatible with the semiconductor and they even form covalent bonds.

14.18 Sn, C, and Si, Ge are all group XIV elements. Yet, Sn is a conductor, C is an insulator while Si and Ge are semiconductors. Why?

14.19 Can the potential barrier across a p-n junction be measured by simply connecting a voltmeter across the junction?

No, the potential barrier across a p-n junction cannot be measured by simply connecting a voltmeter across the junction because the resistance of the voltmeter is very high.

14.20 Draw the output waveform across the resistor in the figure.

14.22 In a CE transistor amplifier there is a current and voltage gain associated with the circuit. In other words, there is a power gain. Considering power a measure of energy, does the circuit violate conservation of energy?

The circuit won’t violate the conservation of energy as the power gain in the CE transistor is very high. Also, extra power is required for the amplification.

(ii) What does the point P in the figure (a) represent?

(iii) What does the points P and Q in the figure (b) represent?

ii) Figure a) point P is the representation of Zener breakdown voltage.

iii) Figure b) point Q is the representation of zero voltage and negative current.

14.24 Three photodiodes D1, D2 and D3 are made of semiconductors having band gaps of 2.5eV, 2eV and 3eV, respectively. Which ones will be able to detect light of wavelength 6000 Ao?

14.25 If the resistance R1 is increased, how will the readings of the ammeter and voltmeter change?

Ib is proportional to 1/R1

14.26 Two car garages have a common gate which needs to open automatically when a car enters either of the garages or cars enter both. Devise a circuit that resembles this situation using diodes for this situation.

OR gate is used for explaining the situation:

14.27 How would you set up a circuit to obtain NOT gate using a transistor?

a) It has only one input and only one output

b) Using the Boolean expression

c) Realization of NOT gate

14.29 Write the truth table for the circuit shown in the figure. Name the gate that the circuit resembles.

The given circuit is AND and the truth table is:

14.30 A Zener of power rating 1 W is to be used as a voltage regulator. If Zener has a breakdown of 5V and it has to regulate voltage which fluctuated between 3V and 7V, what should be the value of Rs for safe operation in the figure?

14.31 If each diode in the figure has a forward bias resistance of 25Ω and infinite resistance in reverse bias, what will be the values of the current I1, I2, I3 and I4?

AB is parallel to EF

14.32 In the circuit shown in the figure, when the input voltage of the base resistance is 10V, Vbe is zero and Vce is also zero. Find the values of Ib, Ic and β.

14.33 Draw the output signals C1 and C2 in the given combination of gates in the figure.

14.34 Consider the circuit arrangement in which the input and output characteristics of NPN transistor in CE configuration

The waveform of the above circuit would be a sine wave with a dip off in the input wave.

(i) Calculate the densities of the charge carriers in the n & p regions.

(ii) Comment which charge carriers would contribute largely for the reverse saturation current when the diode is reverse biased.

ii) The minority carrier holes of n-region would contribute largely for the reverse saturation current when the diode is reverse biased.

It is represented by the following logic relation

Build this gate using AND, OR, and NOT gates.

14.38 Consider a box with three terminals on top of it:

The student obtains graphs of current-voltage characteristics for an unknown combination of components between the two terminals connected in the circuit.

(i) when A is positive and B is negative

(ii) when A is negative and B is positive

(iii) When B is negative and C is positive

(iv) When B is positive and C is negative

(v) When A is positive and C is negative

(vi) When A is negative and C is positive

From these graphs of current-voltage characteristic shown in the figures, determine the arrangement of components between A, B and C.

c) Pn junction is connected to C and n-side of pn junction to B and knee voltage is 0.7 V.

d) The above conditions explains the connection of pn-junction along I and II with the resistance.

Semiconductor Electronics refers to the different electronic circuits, components and devices that are made with a different kind of material, unlike metals and non-metals. Materials based on resistivity and conductivity are categorized into: Metals, Non-Metals and Semiconductors. They have a wide range of applications especially in the field of conducting and resisting electricity. Other different topics that are introduced in this chapter are:

BYJU’S is revolutionising the education sector of the country through its interactive and effective learning methodology that uses videos, animations and info-graphics to teach the students. Our interactive model of teaching helps students learn more effective than traditional teaching methods.