This solution wave optics class 12 problems which help you in practising all-important numerical problems on Wave optics concepts. Students are advised to study and get tuned with this Exemplar questions pdf to understand the topic completely and to score good marks in CBSE class 12 examinations and graduate entrance examination. 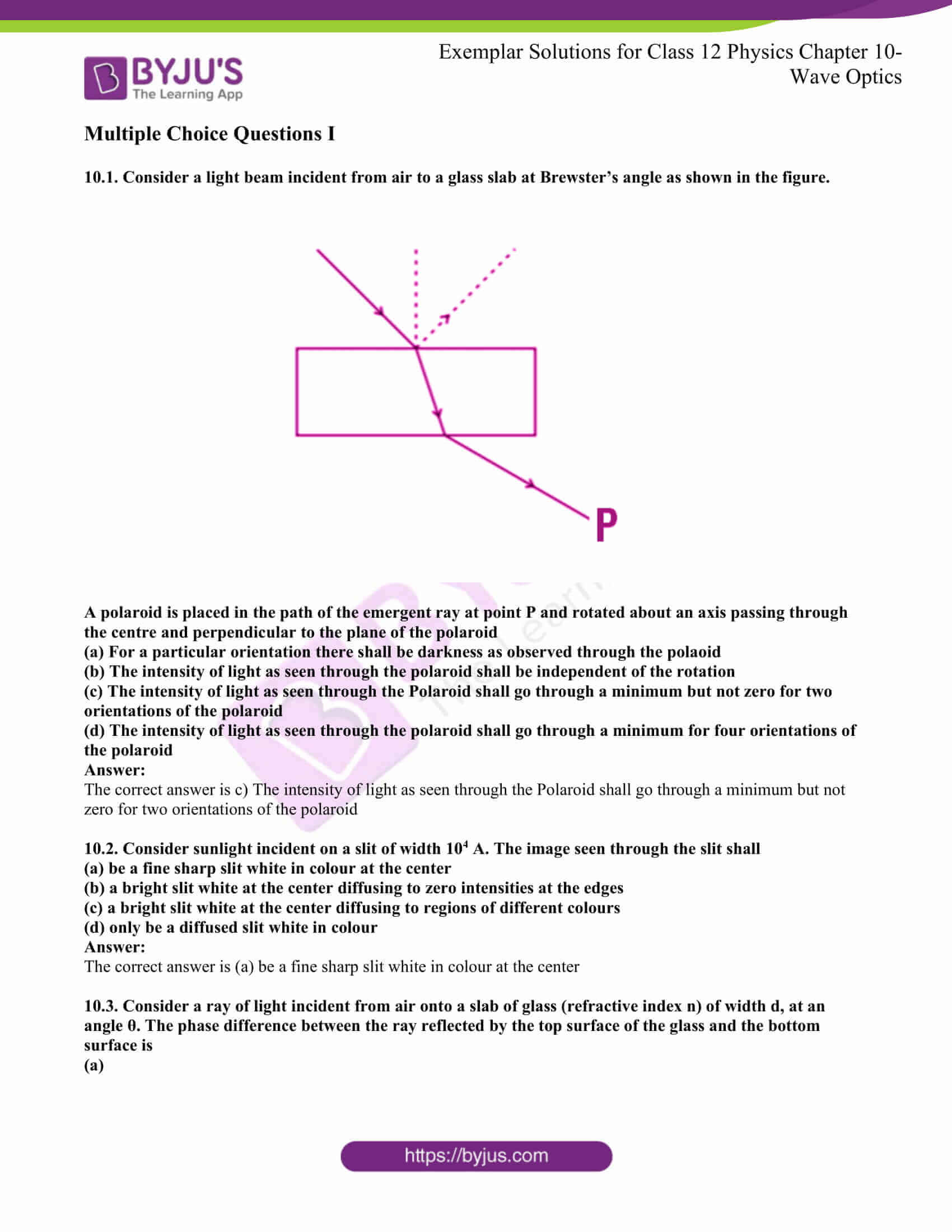 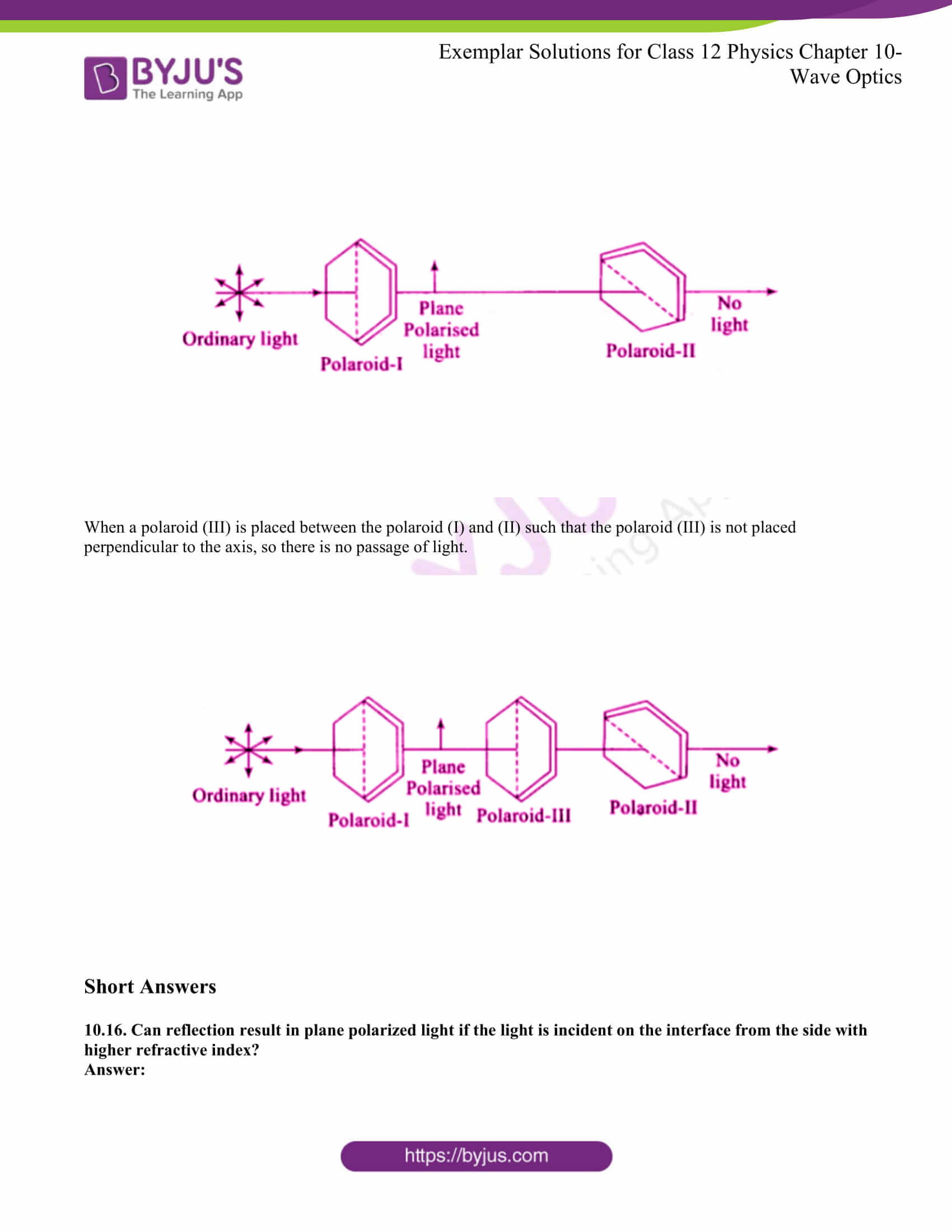 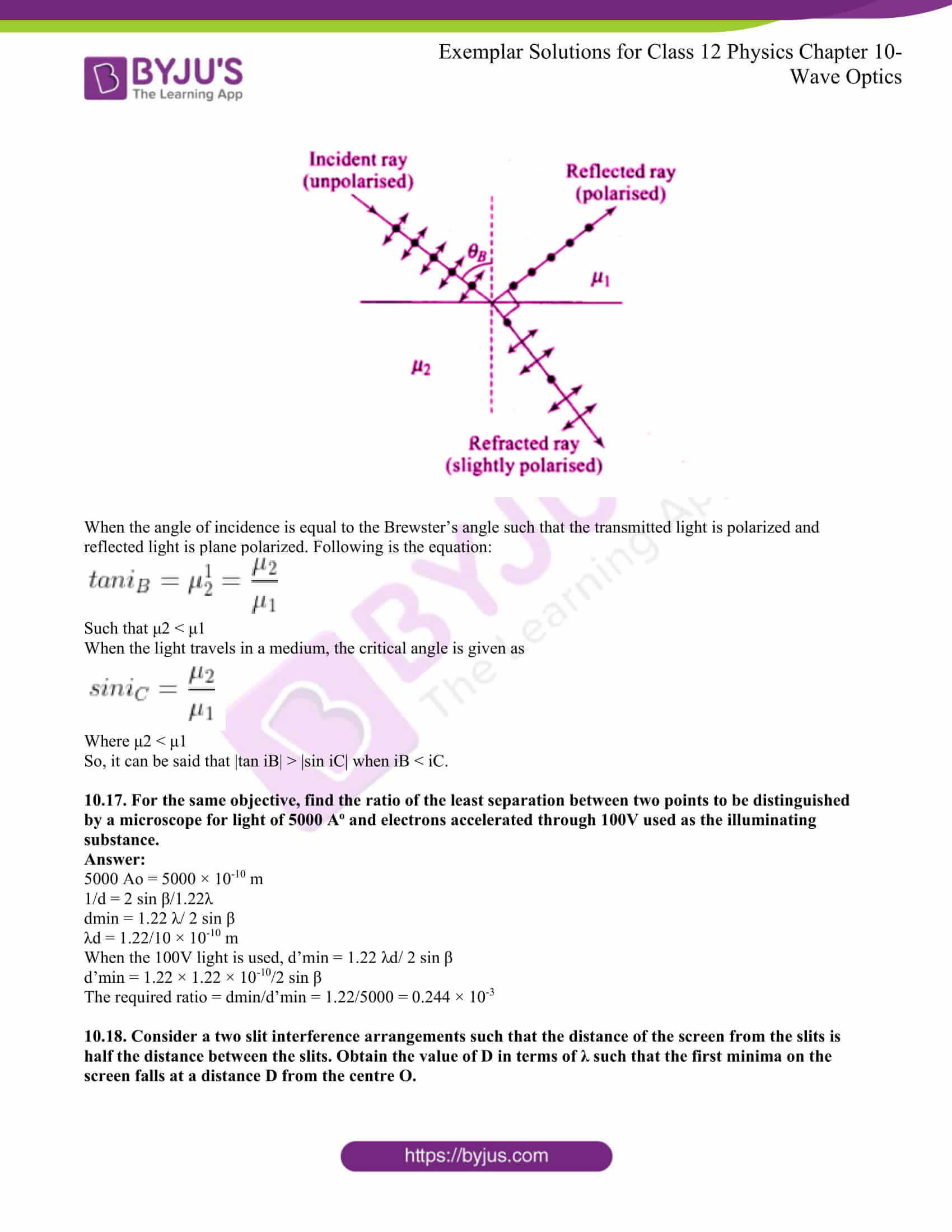 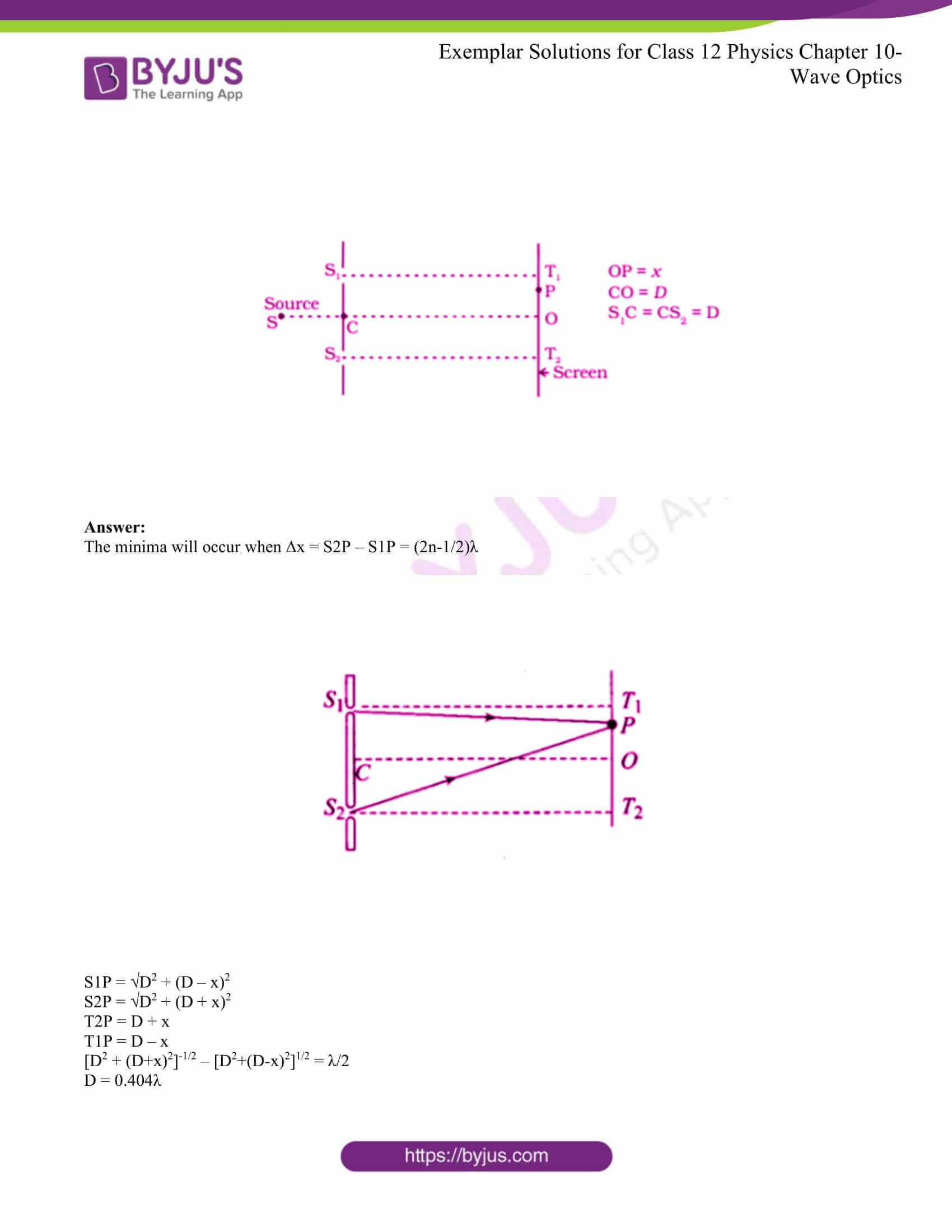 10.1. Consider a light beam incident from air to a glass slab at Brewster’s angle as shown in the figure.

(a) For a particular orientation, there shall be darkness as observed through the polaroid

10.2. Consider sunlight incident on a slit of width 104 A. The image seen through the slit shall

(d) only be a diffused slit white in colour

10.3. Consider a ray of light incident from air onto a slab of glass (refractive index n) of width d, at an angle θ. The phase difference between the ray reflected by the top surface of the glass and the bottom surface is

The correct answer is a)

10.4. In a Young’s double-slit experiment, the source is white light. One of the holes is covered by a red filter and another by a blue filter. In this case

(a) there shall be alternate interference patterns of red and blue

(c) there shall be no interference fringes

The correct answer is c) there shall be no interference fringes

(b) The second screen would be totally dark

10.6. Two sources S1 and S2 of intensity I 1 and I 2 are placed in front of a screen in the figure (a). The pattern of intensity distribution seen in the central portion is given by the figure (b). In this case which of the following statements are true.

(a) S1 and S2 have the same intensities

(b) S1 and S2 have a constant phase difference

(d) S1 and S2 have the same wavelength

a) S1 and S2 have the same intensities

b) S1 and S2 have a constant phase difference

10.7. Consider sunlight incident on a pinhole of width 103A. The image of the pinhole seen on a screen shall be

(a) a sharp white ring

(b) different from a geometrical image

b) different from a geometrical image

10.8. Consider the diffraction pattern for a small pinhole. As the size of the hole is increased

(a) the size decreases

(b) the intensity increases

a) the size decreases

b) the intensity increases

10.9. For light diverging from a point source

(a) the wavefront is spherical

(b) the intensity decreases in proportion to the distance squared

(c) the wavefront is parabolic

a) the wavefront is spherical

b) the intensity decreases in proportion to the distance squared

10.11. Consider a point at the focal point of a convergent lens. Another convergent lens of short focal length is placed on the other side. What is the nature of the wavefronts emerging from the final image?

The orientation of wavefront and the ray are perpendicular to each other. In the above figure, L1 is the source of parallel rays, forming I2 at the focal length of the lens. The image formed acts as L2 through which the light rays get converged into L2 and the final image I is formed.

10.12. What is the shape of the wavefront on earth for sunlight?

We know that the distance between the sun and the earth is very large. We also know that the sun is spherical and can be considered as a point source of light which is present at a very large distance. When the point source is kept at a distance, the wavefront formed will be almost plane.

10.13. Why is the diffraction of sound waves more evident in daily experience than that of lightwave?

The above distance is less than the distinct vision, which normal person cannot see.

10.16. Can reflection result in plane-polarized light if the light is incident on the interface from the side with higher refractive index?

When the angle of incidence is equal to the Brewster’s angle such that the transmitted light is polarized and reflected light is plane-polarized. Following is the equation:

When the light travels in a medium, the critical angle is given as

10.17. For the same objective, find the ratio of the least separation between two points to be distinguished by a microscope for light of 5000 Ao and electrons accelerated through 100V used as the illuminating substance.

Amplitude of the wave in perpendicular polarisation

Amplitude of the wave in parallel polarisation

Intensity at the first minima with polariser

On the positive side,

On the negative side,

The first principal maxima on the positive side is at a distance, which is above point O

The first principal minima on the negative side is at distance, which is below point O

10.21. Four identical monochromatic sources A, B, C, D as shown in the figure produce waves of the same wavelength λ and are coherent. Two receiver R1 and R2 are at great but equal distances from B.

(i) Which of the two receivers picks up the larger signal?

(ii) Which of the two receivers picks up the larger signal when B is turned off?

(iii) Which of the two receivers picks up the larger signal when D is turned off?

(iv) Which of the two receivers can distinguish which of the sources B or D has been turned off?

i) R2 is the larger signal.

10.22. The optical properties of a medium are governed by the relative permittivity (εr) and relative permeability (µr ). The refractive index is defined as √µr εr = n. For ordinary material εr > 0 and µr > 0 and the positive sign is taken for the square root. In 1964, a Russian scientist V. Veselago postulated the existence of material with εr < 0 and µr < 0. Since then such ‘metamaterials’ have been produced in the laboratories and their optical properties studied. For such materials n = -√µrεr. As light enters a medium of such refractive index the phases travel away from the direction of propagation.

(i) According to the description above show that if rays of light enter such a medium from the air (refractive index =1) at an angle θ in 2nd quadrant, them the refracted beam is in the 3rd quadrant

(ii) Prove that Snell’s law holds for such a medium

10.23. To ensure almost 100 per cent transmissivity, photographic lenses are often coated with a thin layer of dielectric material. The refractive index of this material is intermediated between that of air and glass (which makes the optical element of the lens). A typically used dielectric film is MgF2 (n = 1.38). What should the thickness of the film be so that at the centre of the visible spectrum (5500 Ao) there is maximum transmission?

IA is incident at point A such that there is an incident angle I formed from air to film surface. AR1 and AD are the reflected and refracted rays. D is the point where the partial reflection from the glass and film interface. CR2 and AR1 are parallel to each other.

Wave optics refers to the physical branch of optics that are used in many different scientific studies. Different phenomena that occur are Polarization, Interference and diffraction. With the help of a mirror, lens or an aperture the scattering of light can be measured.

Some of the different fields where wave optics are utilized are:

BYJU’S experts provide necessary guidelines necessary to score good marks in class 12 and entrance examination. Along with study materials, BYJU’S subject experts provide you with timely feedback after you submit each assignment.