NCERT Class 12 Physics exemplar for Chapter 12 Atoms provides a broad degree of questions which help the students to comprehend and learn quickly. This exemplar page has class 12 physics NCERT solved examples, MCQ’S, fill in the blanks, and match the following and numerical problems type questions.

Question provided in exemplar solutions is very important as some of them may be directly asked in CBSE class 12 examination and national level entrance examinations like JEE, NEET and JEE advanced. 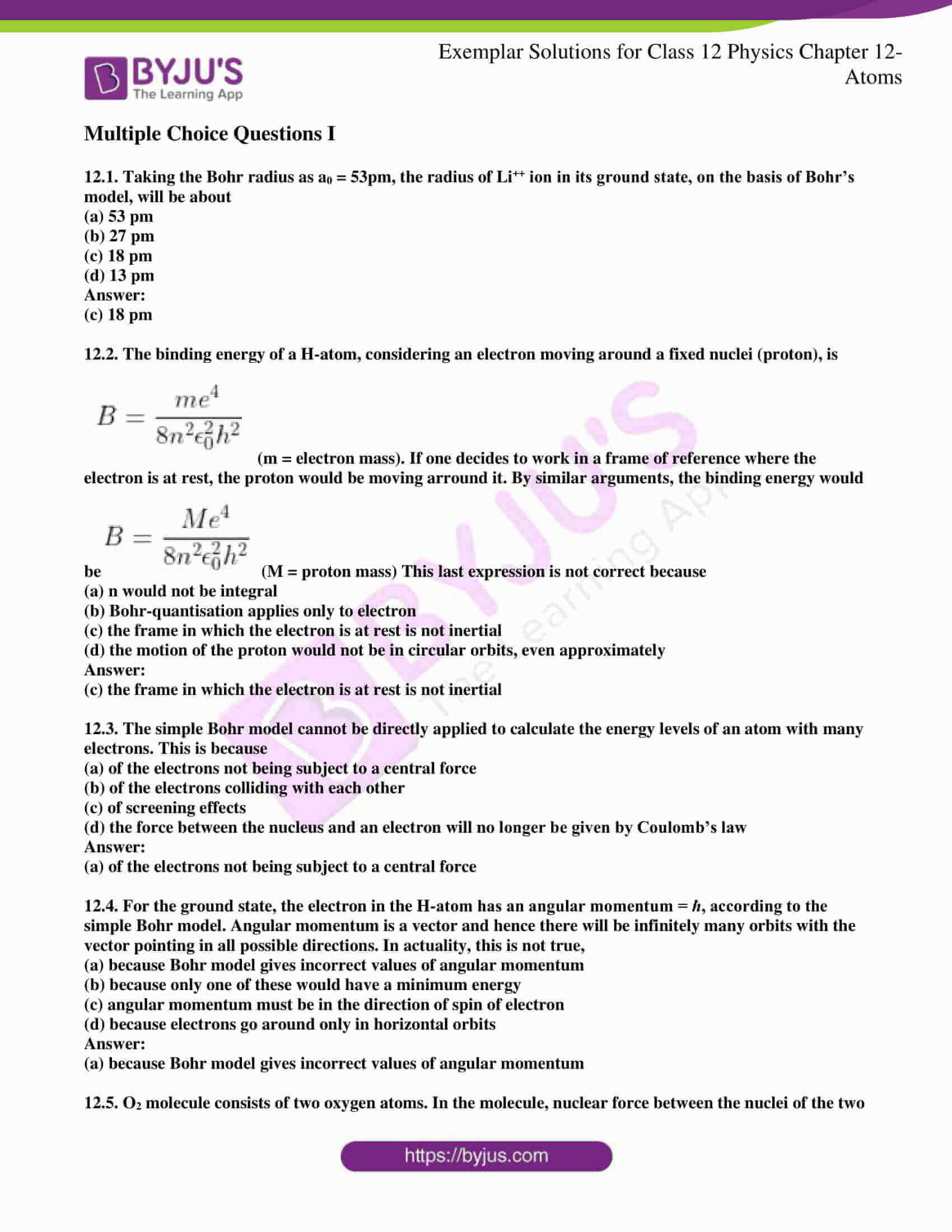 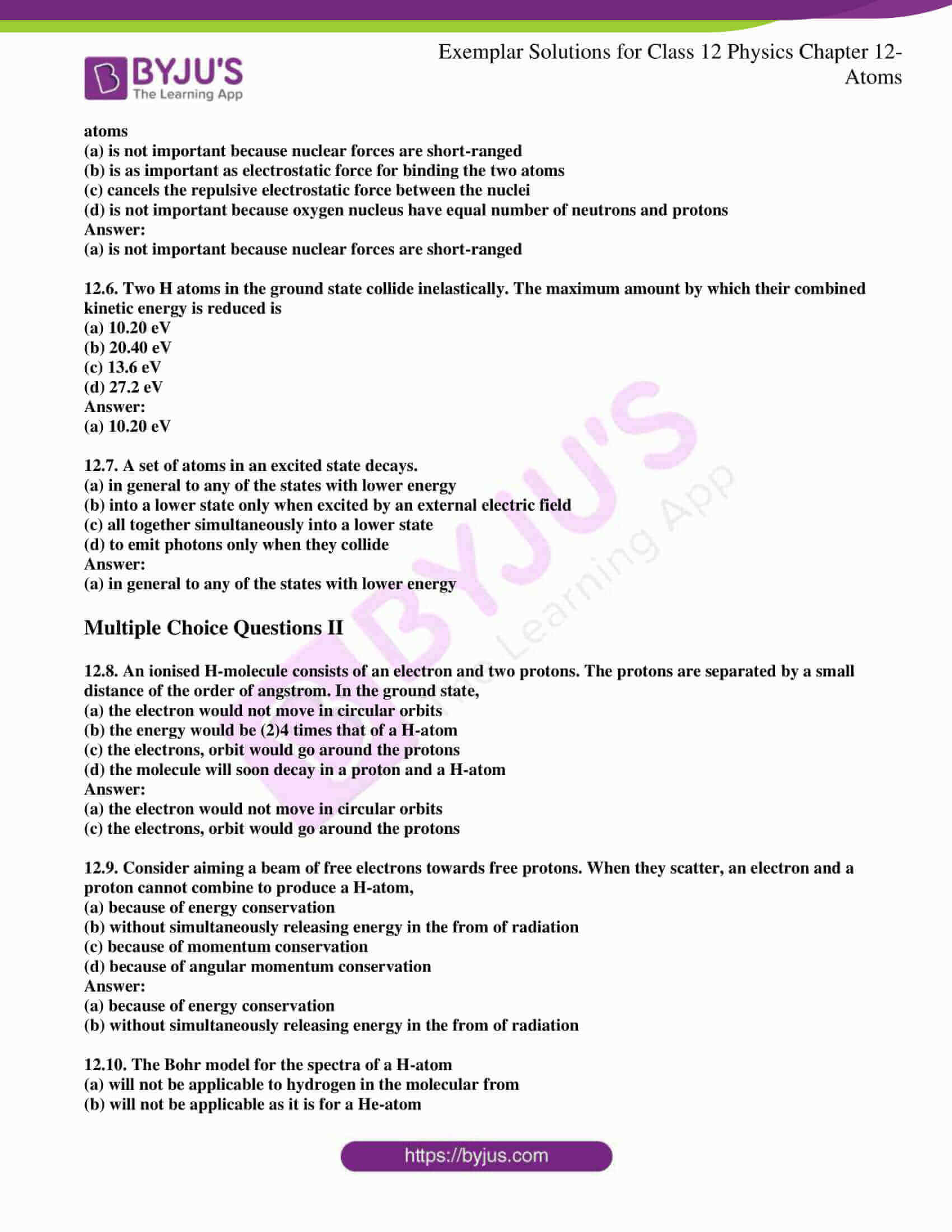 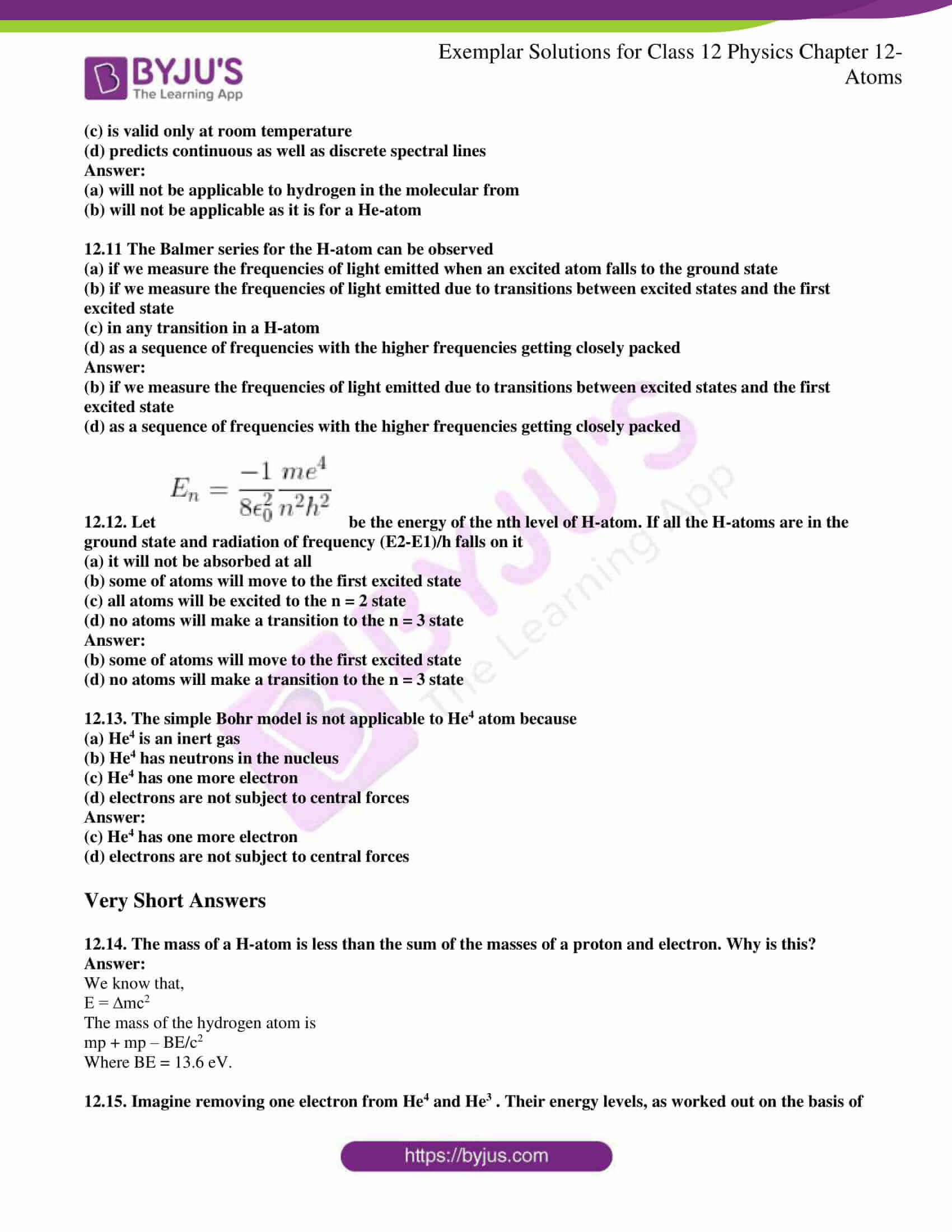 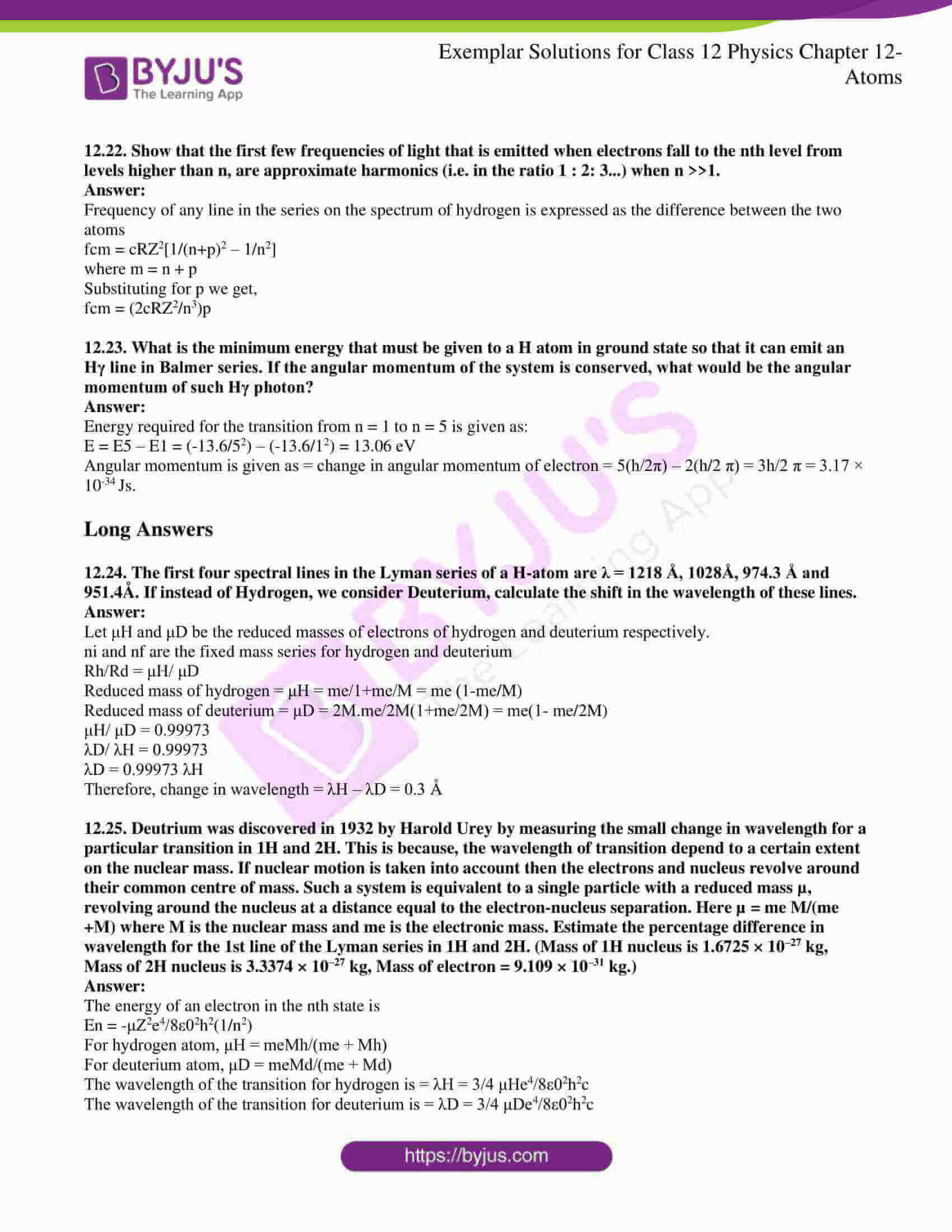 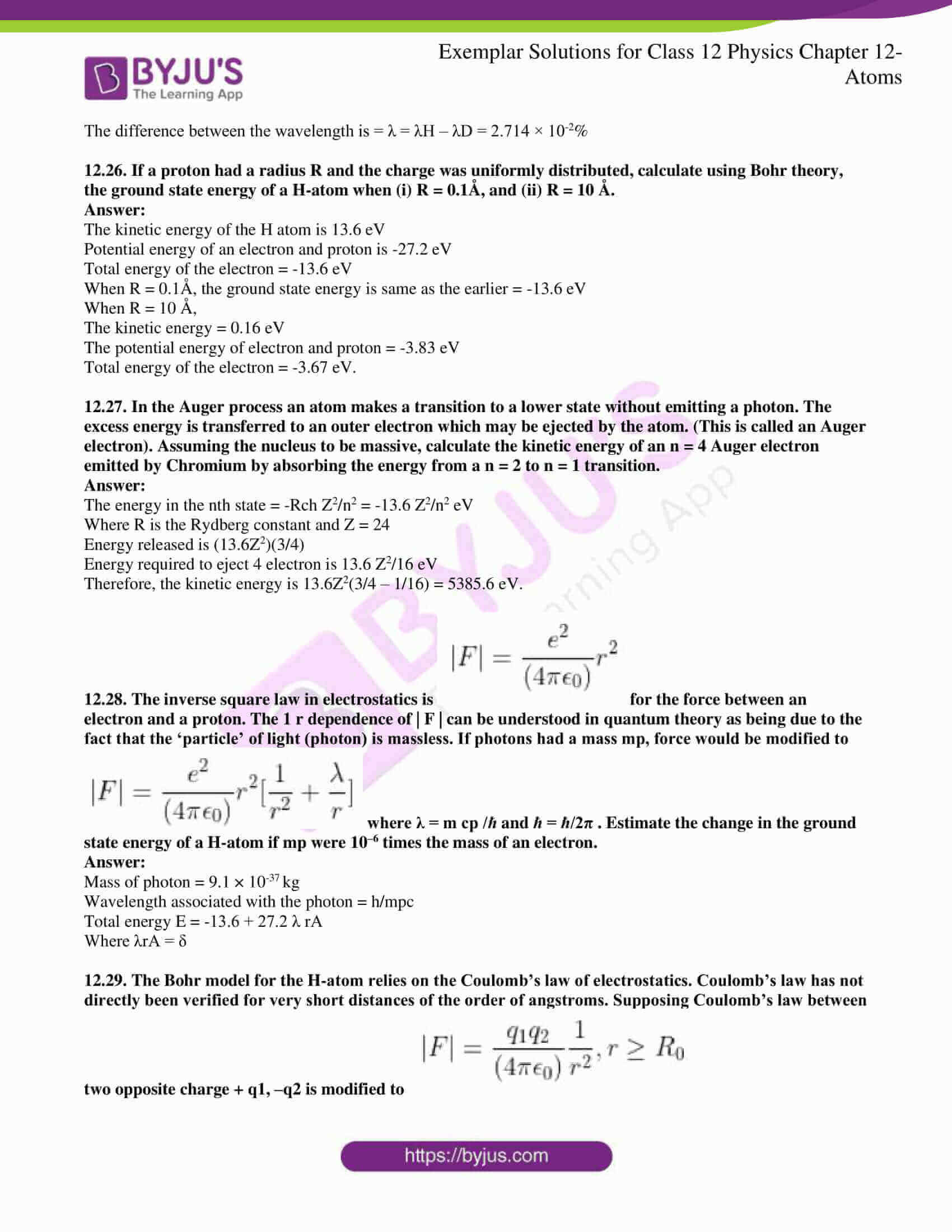 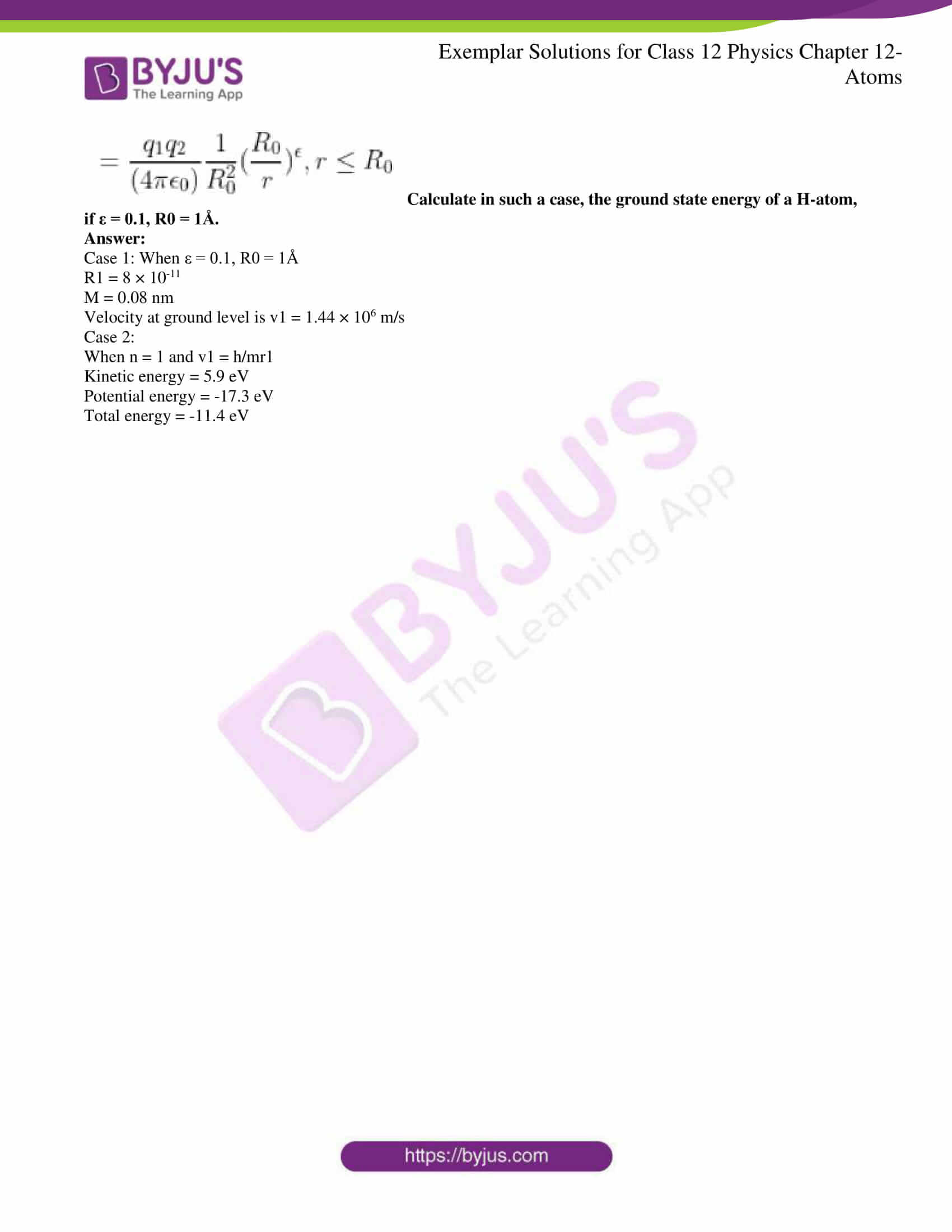 12.2. The binding energy of an H-atom, considering an electron moving around a fixed nucleus (proton), is

(m = electron mass). If one decides to work in a frame of reference where the electron is at rest, the proton would be moving around it. By similar arguments, the binding energy would be

(M = proton mass) This last expression is not correct because

(a) n would not be integral

(b) Bohr-quantisation applies only to electron

(d) the motion of the proton would not be in circular orbits, even approximately

12.3. The simple Bohr model cannot be directly applied to calculate the energy levels of an atom with many electrons. This is because

(a) of the electrons not being subject to a central force

(b) of the electrons colliding with each other

(a) of the electrons not being subject to a central force

12.4. For the ground state, the electron in the H-atom has an angular momentum = ℏ, according to the simple Bohr model. Angular momentum is a vector and hence there will be infinitely many orbits with the vector pointing in all possible directions. In actuality, this is not true,

(a) because Bohr model gives incorrect values of angular momentum

(b) because only one of these would have a minimum energy

(d) because electrons go around only in horizontal orbits

(a) because Bohr model gives incorrect values of angular momentum

12.5. O2 molecule consists of two oxygen atoms. In the molecule, nuclear force between the nuclei of the two atoms

(a) is not important because nuclear forces are short-ranged

(c) cancels the repulsive electrostatic force between the nuclei

(a) is not important because nuclear forces are short-ranged

12.6. Two H atoms in the ground state collide inelastically. The maximum amount by which their combined kinetic energy is reduced is

(a) in general to any of the states with lower energy

(c) all together simultaneously into a lower state

(d) to emit photons only when they collide

(a) in general to any of the states with lower energy

12.8. An ionised H-molecule consists of an electron and two protons. The protons are separated by a small distance of the order of angstrom. In the ground state,

(a) the electron would not move in circular orbits

(c) the electrons, the orbit would go around the protons

(a) the electron would not move in circular orbits

(c) the electrons, the orbit would go around the protons

12.9. Consider aiming a beam of free electrons towards free protons. When they scatter, an electron and a proton cannot combine to produce an H-atom,

(a) because of energy conservation

(b) without simultaneously releasing energy in the form of radiation

(c) because of momentum conservation

(d) because of angular momentum conservation

(a) because of energy conservation

(b) without simultaneously releasing energy in the form of radiation

(a) will not be applicable to hydrogen in the molecular from

(c) is valid only at room temperature

(a) will not be applicable to hydrogen in the molecular from

12.11 The Balmer series for the H-atom can be observed

(c) in any transition in a H-atom

be the energy of the nth level of H-atom. If all the H-atoms are in the ground state and radiation of frequency (E2-E1)/h falls on it

(a) it will not be absorbed at all

12.13. The simple Bohr model is not applicable to He4 atom because

(b) He4 has neutrons in the nucleus

(c) He4 has one more electron

(d) electrons are not subject to central forces

(c) He4 has one more electron

(d) electrons are not subject to central forces

12.14. The mass of an H-atom is less than the sum of the masses of a proton and electron. Why is this?

The mass of the hydrogen atom is

12.15. Imagine removing one electron from He4 and He3. Their energy levels, as worked out on the basis of Bohr model will be very close. Explain why.

The energies of He4 and He3 will be very close according to the Bohr model because both have 1 electron as in case of the hydrogen atom and the nucleus is 4 times heavier than the H-atoms. Therefore, the stability of these atoms remains close to the H atom and so is their energy levels.

12.16. When an electron falls from a higher energy to a lower energy level, the difference in the energies appears in the form of electromagnetic radiation. Why cannot it be emitted as other forms of energy?

When an electron falls from a higher energy to a lower energy level, the difference in the energies appears in the form of electromagnetic radiation because there is an acceleration of the charged particle.

As there is no change in the position of the proton and electron the product of both the charges will remain the same.

12.18. Consider two different hydrogen atoms. The electron in each atom is in an excited state. Is it possible for the electrons to have different energies but the same orbital angular momentum according to the Bohr model?

As the value of n in two different hydrogen atoms are different, their angular momentum will be different.

According to Bohr’s model, the angular momentum is given as

12.19. Positronium is just like an H-atom with the proton replaced by the positively charged anti-particle of the electron (called the positron which is as massive as the electron). What would be the ground state energy of positronium?

The lowest energy of the positronium is -6.8 electron volts

The highest energy level of the positronium which is the next to n = 1 that is n = 2 is -1.7 electron volt.

12.20. Assume that there is no repulsive force between the electrons in an atom but the force between positive and negative charges is given by Coulomb’s law as usual. Under such circumstances, calculate the ground state energy of a He-atom.

12.21. Using the Bohr model, calculate the electric current created by the electron when the H-atom is in the ground state.

Let v be the velocity of the electron

The electric current is given as I = Q

Therefore, the electric current is given as I = 2πa0/v e

12.22. Show that the first few frequencies of light that are emitted when electrons fall to the nth level from levels higher than n are approximate harmonics (i.e. in the ratio 1 : 2: 3…) when n >>1.

Substituting for p we get,

Energy required for the transition from n = 1 to n = 5 is given as:

Let μH and μD be the reduced masses of electrons of hydrogen and deuterium respectively.

12.25. Deuterium was discovered in 1932 by Harold Urey by measuring the small change in wavelength for a particular transition in 1H and 2H. This is because the wavelength of transition depends to a certain extent on the nuclear mass. If nuclear motion is taken into account then the electrons and nucleus revolve around their common centre of mass. Such a system is equivalent to a single particle with a reduced mass µ, revolving around the nucleus at a distance equal to the electron-nucleus separation. Here µ = me M/(me +M) where M is the nuclear mass and me is the electronic mass. Estimate the percentage difference in wavelength for the 1st line of the Lyman series in 1H and 2H. (Mass of 1H nucleus is 1.6725 × 10–27 kg, Mass of 2H nucleus is 3.3374 × 10–27 kg, Mass of electron = 9.109 × 10–31 kg.)

The energy of an electron in the nth state is

Potential energy of an electron and proton is -27.2 eV

The potential energy of electron and proton = -3.83 eV

12.27. In the Auger process, an atom makes a transition to a lower state without emitting a photon. The excess energy is transferred to an outer electron which may be ejected by the atom. (This is called an Auger electron). Assuming the nucleus to be massive, calculate the kinetic energy of an n = 4 Auger electron emitted by Chromium by absorbing the energy from an = 2 to n = 1 transition.

Where R is the Rydberg constant and Z = 24

12.28. The inverse square law in electrostatics is

for the force between an electron and a proton. The 1 r dependence of | F | can be understood in quantum theory as being due to the fact that the ‘particle’ of light (photon) is massless. If photons had a mass mp, force would be modified to

Wavelength associated with the photon = h/mpc

12.29. The Bohr model for the H-atom relies on the Coulomb’s law of electrostatics. Coulomb’s law has not directly been verified for very short distances of the order of angstroms. Supposing Coulomb’s law between two opposite charge + q1, –q2 is modified to

The basic unit of matter which is the smallest thing in existence is called an atom. The size of an atom is usually variable in nature depending on the type of element. Protons, Neutrons and Electrons are the three different particles present inside the atom. Atoms when grouped together form molecules. For an example, an oxygen molecule is made from smaller oxygen atoms which are grouped together.

The different parts of an atom are:

Stay tuned with BYJU’S to get free notes, study materials, NCERT SOLUTIONS, previous year question papers, sample papers, worksheets and exemplar of all the subjects and classes for CBSE syllabus 2018-19.