Subject matter experts at BYJU’S having extensive subject knowledge are the minds behind framing NCERT solutions. This particular chapter briefly describes the role of micro-organisms in the society and how they prove to be beneficial to us. Microbes are the entities which are not visible through naked eyes, some of these are fungi, bacteria, yeasts etc.

These tiny entities play a major role in maintaining balance in an ecosystem. While some microbes may be fatal, some others are extremely beneficial to mankind. Students are already well versed with the role of microbes in brief, but in this class, students will learn about the diversity of the bad and the good microbes, the role of microbes in different industries and households, in agriculture, sewage treatment, medicine – antibiotics, vaccines, chemicals, enzymes, bioactive molecules, beverages and much more. 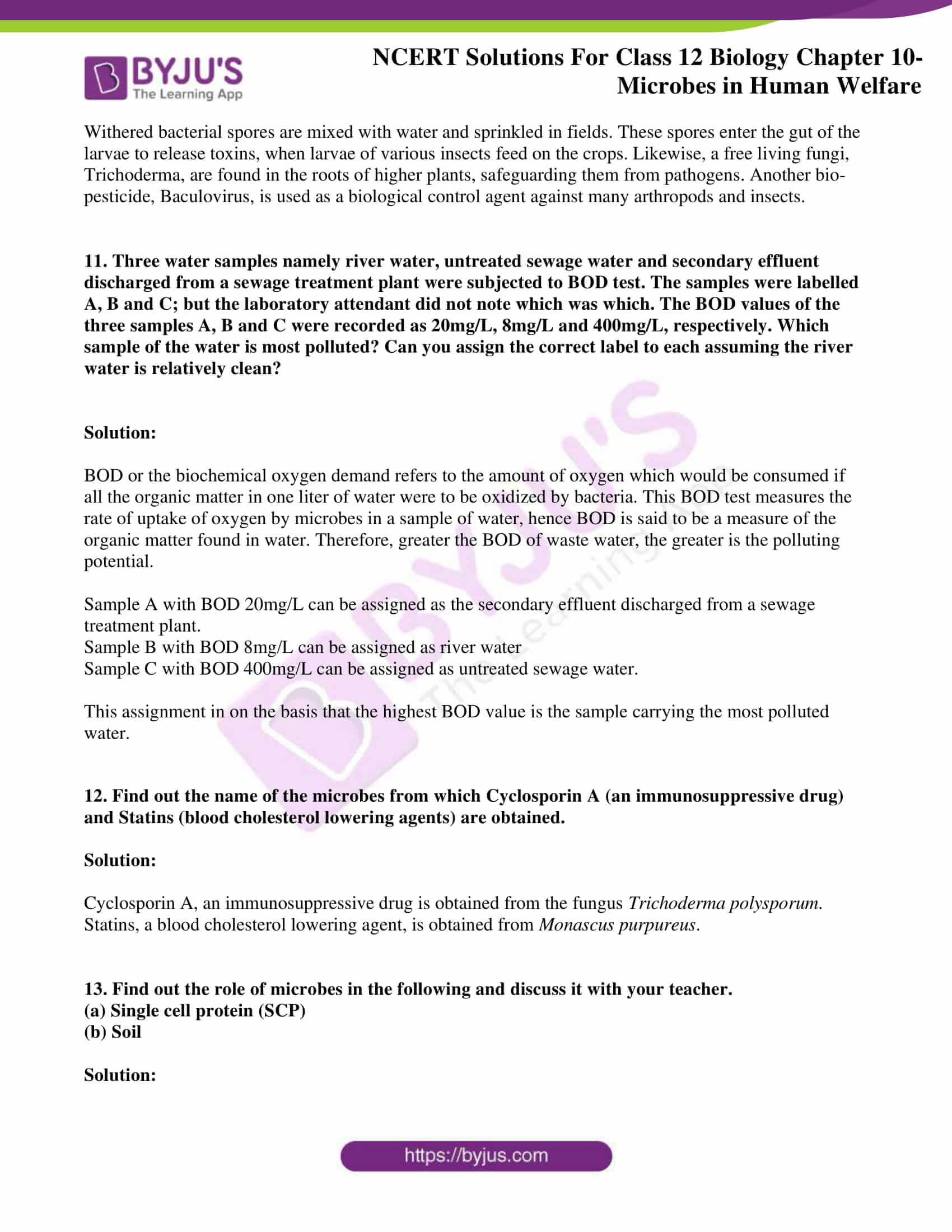 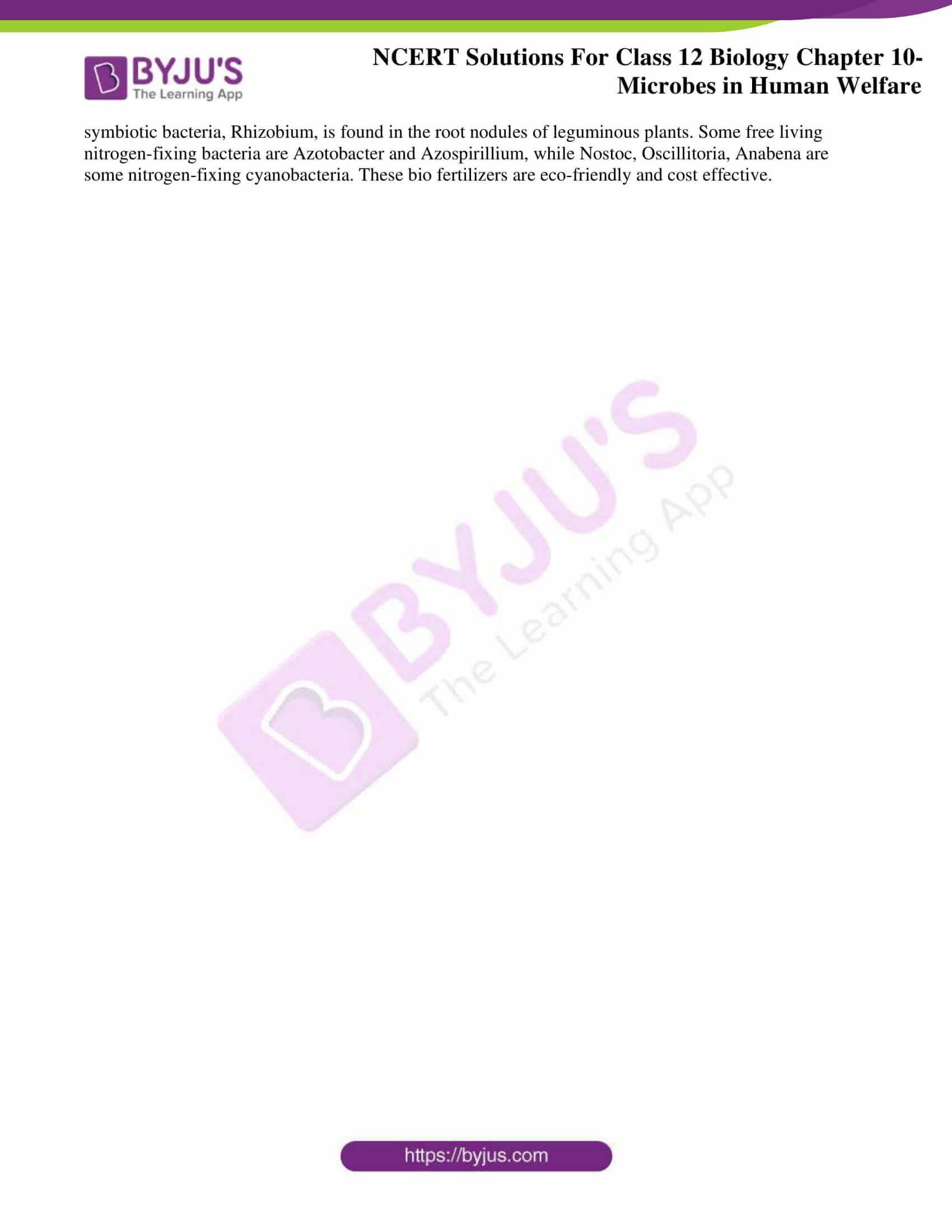 To demonstrate the presence of microbes with the help of a microscope, Curd is apt. It can be used as a sample as it contains plenty of Lactobacillus or lactic acid bacteria. These are the bacteria that produce acids which coagulate and digest the milk proteins. One drop of bacteria can consist of millions of bacteria. These can be observed easily under a microscope.

2. Give examples to prove that microbes release gases during metabolism.

Microbes release gases during metabolism, some examples are as follows:

3. In which food would you find lactic acid bacteria? Mention some of their useful applications.

We can find lactic acid bacteria in curd. Some of the useful applications of these bacteria are:

4. Name some traditional Indian foods made of wheat, rice and Bengal gram (or their products) which involve use of microbes.

Some Indian food made of wheat, rice and Bengal gram are:

5. In which way have microbes played a major role in controlling diseases caused by harmful bacteria?

Microbes play an important role in controlling diseases caused by harmful bacteria, some are:

6. Name any two species of fungus, which are used in the production of the antibiotics.

Several microbes produce antibiotics,that kills other microbes which cause diseases. These medicines, antibiotics are typically acquired from fungi and bacteria. Two species of fungus that are used in the production of antibiotics are:

7. What is sewage? In which way can sewage be harmful to us?

The term sewage refers to the municipal waste material which is carried in drains and sewers. Sewage includes both solid and liquid wastes that is rich in microbes and organic matter.

Most of these microbes are pathogenic, i.e., they are capable of causing diseases such as water-borne diseases. This sewage water is one of the major causes to contaminate drinking water. Therefore, it is vital to treat sewage water, by collecting and disposing it.

8. What is the key difference between primary and secondary sewage treatment?

The key differences are as follows:

9. Do you think microbes can also be used as source of energy? If yes, how?

Yes, microbes can certainly be a source of energy. Some bacteria such as the Methane bacterium can be used to generate biogas or gobar gas. In a biogas plant, under anaerobic conditions, biogas can be generated. The biogas plant consists of a concrete tank, with a depth of nearly 10-15 feet, comprising of adequate outlets and inlets. The gathered dung is mixed with water for the formation of slurry and flung into the tank. The tank consists of a digester, which is filled with plenty of anaerobic methane-producing bacteria. This produces biogas from the slurry. Biogas can be extracted through a pipe which can be used as a source of energy. The slurry that is used, is removed from the outlet and used as a fertilizer.

10. Microbes can be used to decrease the use of chemical fertilisers and pesticides. Explain how this can be accomplished.

Organic farming is carried out without the use of any pesticides and chemical fertilizers. Microbes play a major role in organic farming. Bio-fertilizers involves picking advantageous microbes to help improve plant growth, by supplying nutrients as bio-fertilizers are living entities that are known to increase soil fertility. These are introduced into roots, seeds and soil in order to make nutrients available, thus enriching it with organic and soil nutrients. Some species of cyanobacteria and bacteria have the potential to fix the free atmospheric nitrogen.

A symbiotic bacteria, Rhizobium, is found in the root nodules of leguminous plants. Some free living nitrogen-fixing bacteria are Azotobacter and Azospirillium, while Nostoc, Oscillitoria, Anabena are some nitrogen-fixing cyanobacteria. These bio fertilizers are eco-friendly and cost effective.

Withered bacterial spores are mixed with water and sprinkled in fields. These spores enter the gut of the larvae to release toxins, when larvae of various insects feed on the crops. Likewise, a free living fungi, Trichoderma, are found in the roots of higher plants, safeguarding them from pathogens. Another bio-pesticide, Baculovirus, is used as a biological control agent against many arthropods and insects.

11. Three water samples namely river water, untreated sewage water and secondary effluent discharged from a sewage treatment plant were subjected to BOD test. The samples were labelled A, B and C; but the laboratory attendant did not note which was which. The BOD values of the three samples A, B and C were recorded as 20mg/L, 8mg/L and 400mg/L, respectively. Which sample of the water is most polluted? Can you assign the correct label to each assuming the river water is relatively clean?

BOD or the biochemical oxygen demand refers to the amount of oxygen which would be consumed if all the organic matter in one liter of water were to be oxidized by bacteria. This BOD test measures the rate of uptake of oxygen by microbes in a sample of water, hence BOD is said to be a measure of the organic matter found in water. Therefore, greater the BOD of waste water, the greater is the polluting potential.

Sample A with BOD 20mg/L can be assigned as the secondary effluent discharged from a sewage treatment plant.

Sample C with BOD 400mg/L can be assigned as untreated sewage water.

This assignment in on the basis that the highest BOD value is the sample carrying the most polluted water.

12. Find out the name of the microbes from which Cyclosporin A (an immunosuppressive drug) and Statins (blood cholesterol lowering agents) are obtained.

13. Find out the role of microbes in the following and discuss it with your teacher.

The role of microbes in the following are as follows:

14. Arrange the following in the decreasing order (most important first) of their importance, for the welfare of human society. Give reasons for your answer. Biogas, Citric acid, Penicillin and Curd.

The following are arranged in decreasing order of importance, the first being most important for welfare of human society.

15. How do biofertilisers enrich the fertility of the soil?

Bio-fertilizers are living entities that are known to increase soil fertility, involving picking advantageous microbes to help improve plant growth, by supplying nutrients. These are introduced into roots, seeds and soil in order to make nutrients available, thus enriching it with organic and soil nutrients. Some species of cyanobacteria and bacteria have the potential to fix the free atmospheric nitrogen. A symbiotic bacteria, Rhizobium, is found in the root nodules of leguminous plants. Some free living nitrogen-fixing bacteria are Azotobacter and Azospirillium, while Nostoc, Oscillitoria, Anabena are some nitrogen-fixing cyanobacteria. These bio fertilizers are eco-friendly and cost effective.

NCERT Solutions for Class 12 Biology Chapter 10 – Microbes in Human Welfare is grouped under Unit – Biology in Human Welfare. Marks allocated for all the chapters under this unit is close to 14 marks. Revising and practising from previous years’ question papers and sample papers can greatly help students and boost their confidence.

Key concepts covered in this chapter are given below:

How to solve the questions present in the Chapter 10 of NCERT Solutions for Class 12 Biology faster?

Students of Class 12 should solve the questions present in the NCERT textbook to get an idea about the important concepts present in them. If doubts arise while solving the problems, students can refer to the NCERT Solutions for Class 12 Biology from BYJU’S where each and every problem is solved accurately. The solutions contain explanations for each step to help students understand the method of solving questions without any difficulty.

What are the key features of NCERT Solutions for Class 12 Biology Chapter 10?

The key features of NCERT Solutions for Class 12 Biology Chapter 10 are –
1. The answers are prepared by highly experienced Biology experts.
2. The solutions are accurate without any error based on the latest CBSE syllabus.
3. Every important topic is explained in a simple language to help students score well in the exams.
4. Students get a thorough understanding of the important concepts using the NCERT Solutions from BYJU’S.


Mention the topics included in the Chapter 12 of NCERT Solutions for Class 12 Biology.