Get access to NCERT Solutions for Class 12 Biology Chapter 15 Biodiversity and Its Conservation, here. The NCERT Solutions for Class 12 are provided for students to reap maximum benefits and experience hassle-free learning. To maximise the opportunity for students to score high marks, these solutions are updated according to the latest CBSE Syllabus 2022-23 and marking schemes. 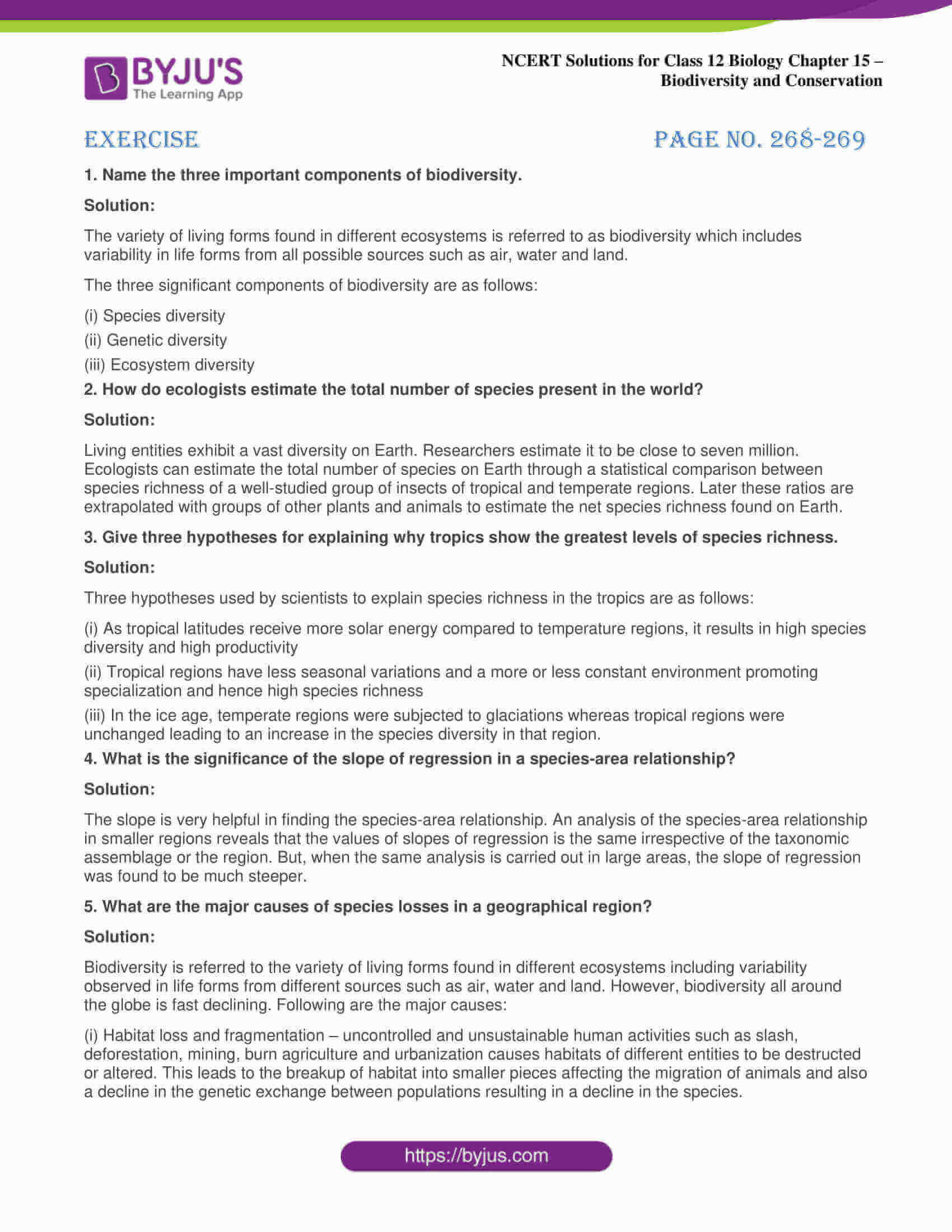 The variety of living forms found in different ecosystems is referred to as biodiversity, which includes variability in life forms from all possible sources, such as air, water and land.

The three significant components of biodiversity are as follows:

2. How do ecologists estimate the total number of species present in the world?

Living entities exhibit a vast diversity on Earth. Researchers estimate it to be close to seven million. Ecologists can estimate the total number of species on Earth through a statistical comparison between the species richness of a well-studied group of insects in tropical and temperate regions. Later, these ratios are extrapolated with groups of other plants and animals to estimate the net species richness found on Earth.

3. Give three hypotheses for explaining why tropics show the greatest levels of species richness.

Three hypotheses used by scientists to explain species richness in the tropics are as follows:

(iii) In the ice age, temperate regions were subjected to glaciations, whereas tropical regions were unchanged, leading to an increase in the species diversity in that region.

4. What is the significance of the slope of regression in a species-area relationship?

The slope is very helpful in finding the species-area relationship. An analysis of the species-area relationship in smaller regions reveals that the values of slopes of regression are the same irrespective of the taxonomic assemblage or the region. But, when the same analysis is carried out in large areas, the slope of regression was found to be much steeper.

5. What are the major causes of species losses in a geographical region?

Biodiversity is referred to the variety of living forms found in different ecosystems, including variability observed in life forms from different sources such as air, water and land. However, biodiversity all around the globe is fast declining. The following are the major causes:

(i) Habitat loss and fragmentation – Uncontrolled and unsustainable human activities such as slash, deforestation, mining, burn agriculture, and urbanisation cause habitats of different entities to be destructed or altered. This leads to the breakup of habitat into smaller pieces affecting the migration of animals and also a decline in the genetic exchange between populations resulting in a decline in the species.

(iii) Over-exploitation – Humans have caused species to get extinct or endangered due to over-exploitation and over-hunting of different plants and animals. (For example, the extinction of passenger pigeons and tigers)

(iv) Alien species invasions – Intentional introduction of non-native species into a particular habitat causes the extinction of indigenous species. For example, the Nile perch caused the extinction of more than two hundred species of native fish of Lake Victoria in Kenya when they were introduced into the lake.

6. How is biodiversity important for ecosystem functioning?

Biodiversity refers to the variety of life on earth at all levels. It is important for the following:

(ii) Higher biodiversity causes the ecosystem to be more stable in productivity, hence more resistant to any disturbance, such as floods or alien species invasions.

(iii) The ecological balance in an ecosystem rich in biodiversity remains unchanged.

(iv) As different trophic levels are connected through food chains, the illness of one organism at any trophic level would disrupt the whole food chain. For instance, if plants are destroyed in a food chain, then it would create an imbalance in the world of herbivores due to scarcity of food. Eventually, if all deers die, the tigers will also die soon.

Thus, if an ecosystem is rich in species, each tropic level will have other food alternatives, which would increase the life expectancy rate of entities. Therefore, biodiversity has a significant role in preserving the health and ecological balance of an ecosystem.

7. What are sacred groves? What is their role in conservation?

Sacred groves are referred to the tracts of forests that are restored in the places of worship. They are found to be in the Western Ghats of Karnataka, Rajasthan, Maharashtra, Madhya Pradesh, and Meghalaya. These groves help to safeguard threatened, rare and endemic species of animals and plants present in a region. Act of deforestation is sternly banned in tribal regions, and thus, sacred groves are protected in these regions.

8. Among the ecosystem services are control of floods and soil erosion, how is this achieved by the biotic components of the ecosystem?

The ecosystem has two types of components, the abiotic and the biotic components. While the abiotic components are air, light, water, temperature, soil etc., biotic components are constituted by animals, plants and humans. The role of plants is crucial in controlling soil erosion and floods. Plant roots secure and bind the soil particles together, thus inhibiting the top layer of the soil from getting eroded by running water or wind. Plant roots cause the soil to be porous enabling groundwater infiltration and averting floods. This is how plants are able to prevent erosion of soil and other natural calamities such as droughts and floods. They also increase biodiversity and the fertility of the soil.

9. The species diversity of plants (22 per cent) is much less than that of animals (72 per cent). What could be the explanations for how animals achieved greater diversification?

(i) Adaptation of animals to changing environments for survival. For instance, animals and insects have grown to develop a complex nervous system for coordinated and controlled body movements. Also, insects have grown to be versatile and developed the potential to survive in different habitats in comparison to other life forms, as they possess repeated body segments with external cuticles and paired appendages.

(ii) Plants are immobile, while animals can move around. Hence, animals have achieved more diversity as they have moved and adapted to different habitats.

10. Can you think of a situation where we deliberately want to make a species extinct? How would you justify it?

Yes, there has been such a situation where different types of parasites and disease-causing micro-organisms would want to be eradicated from the planet. Scientists were working extensively to fight and wipe them out completely as these microbes are harmful to human existence and have been successful in eliminating smallpox from the Earth through the effective use of vaccination. This shows how humans deliberately want to make these species extinct. Some other programmes aiming at eradication are Hepatitis B, polio vaccinations etc., to eliminate those microbes that cause diseases.

NCERT Solutions for Class 12 Biology Chapter 15 – Biodiversity and Its Conservation is covered under Unit – Ecology and is included in the CBSE Syllabus 2022-23. The Ecology unit includes the following chapters:

As per past latest exam trends, the Unit – Ecology, on the whole, holds 14 marks. Hence, students are required to learn all concepts in detail and practise NCERT Solutions, previous years’ question papers and sample papers.

Key topics covered in this Chapter are given below:

Students can utilise the NCERT Solutions for Class 12 Biology Chapter 15 for any quick reference to comprehend complex topics.

The NCERT Solutions is available for Classes 1 to 12 in subject-wise and chapter-wise formats at BYJU’S. These solutions are comprehensive and include tricks and tips for writing answers and thus scoring high marks in the Class 12 CBSE Board examinations.

Why should I refer to the NCERT Solutions for Class 12 Biology Chapter 15?

Students of Class 12 find it difficult to understand the new concepts covered in this Chapter. Choosing the correct study material requires a thorough understanding of the updated CBSE Syllabus. The NCERT Solutions for Class 12 Biology Chapter 15 covers all the topics as per the prescribed textbook for the academic year 2022-23. So, students can clear their doubts by solving these solutions in a better way.

How to score more marks in Chapter 15 of NCERT Solutions for Class 12 Biology?

The NCERT Solutions for Class 12 Biology Chapter 15 builds a strong foundation of the basic concepts covered in the chapter. The solutions framed by the expert faculty at BYJU’S are accurate based on the latest CBSE marking scheme and weightage. By referring to these solutions, students will gain more knowledge about the concepts which are important for the board exams. Precise answers in a systematic format help students to remember the concepts effectively.

How can students learn to differentiate biodiversity and biodiversity conservation from Chapter 15 of NCERT Solutions for Class 12 Biology?

The distinct features of different types of biodiversity are the main concept covered in Chapter 15. By referring to the NCERT textbook, students can learn the concept of biodiversity and biodiversity conservation. They can also download the NCERT Solutions at BYJU’S in PDF in order to obtain a clear picture of the concepts which are important as per the latest CBSE Syllabus for Class 12.