NCERT Solutions for Class 12 Biology Chapter 3 Human Reproduction is framed by subject-matter experts and comprises detailed answers for students’ reference. All the questions given in the exercises from the textbook are answered here. Students can refer to these answers to prepare for the board examinations. The answers provided in the NCERT Solutions for Class 12 are beneficial to enhance the conceptual knowledge of students.

Chapter 3 Human Reproduction of Class 12 Biology is formulated according to the CBSE Syllabus for 2022-23. The solutions are solved skillfully with the use of student-friendly terminologies, aligning with the standards that are to be followed for solving the NCERT Solutions for Class 12. Practising these solutions can prove to be extremely beneficial not only from the board examination point of view but can also help Class 12 students to perform well in the upcoming competitive examinations. 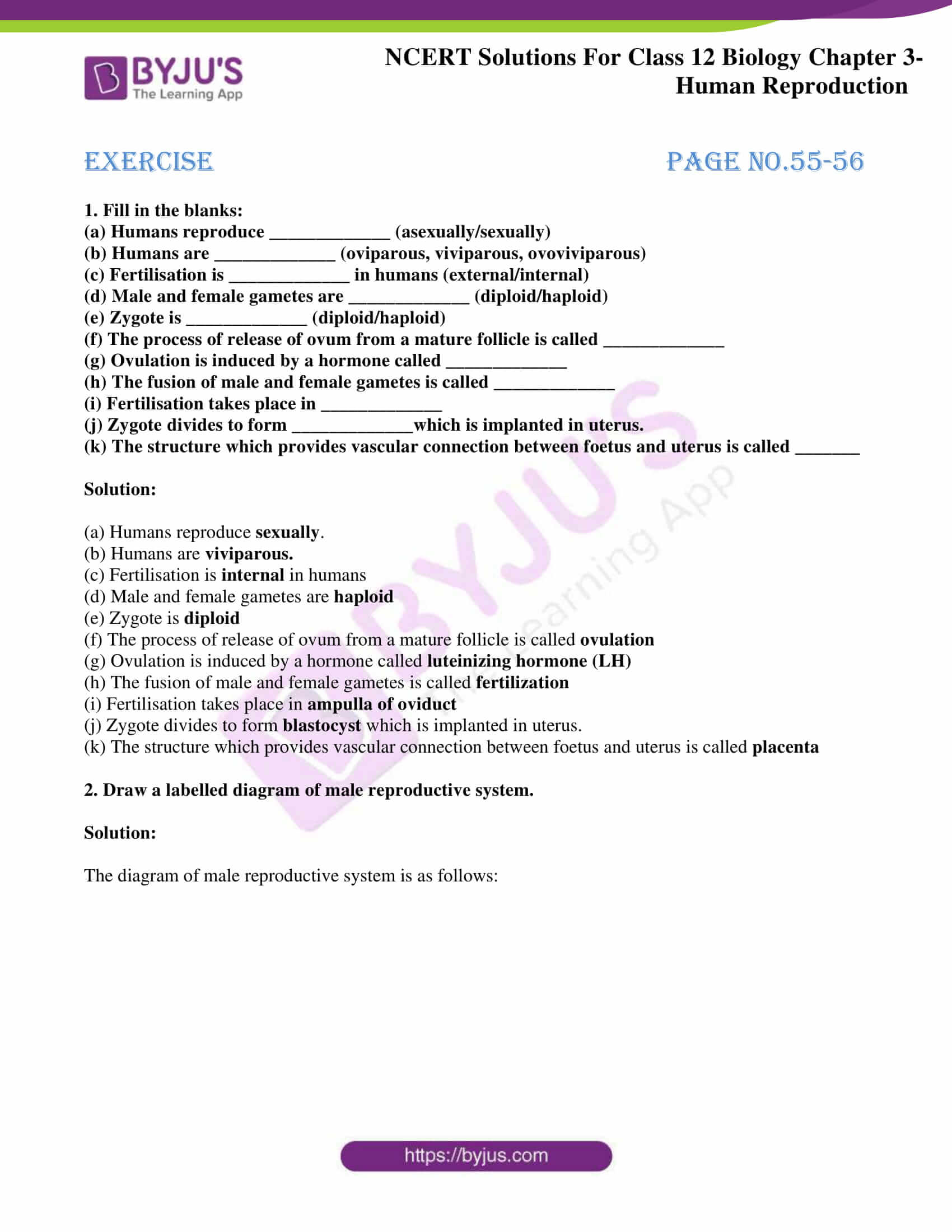 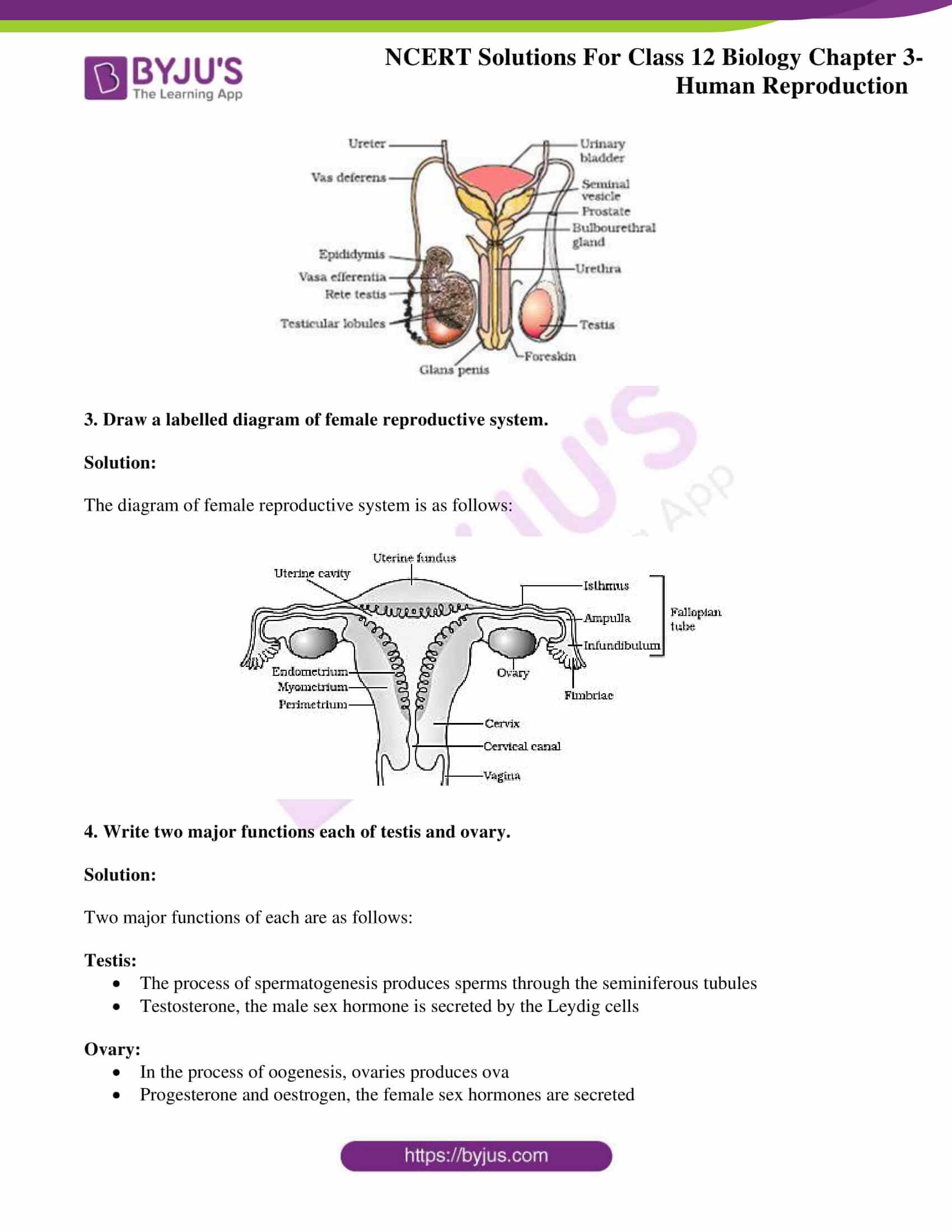 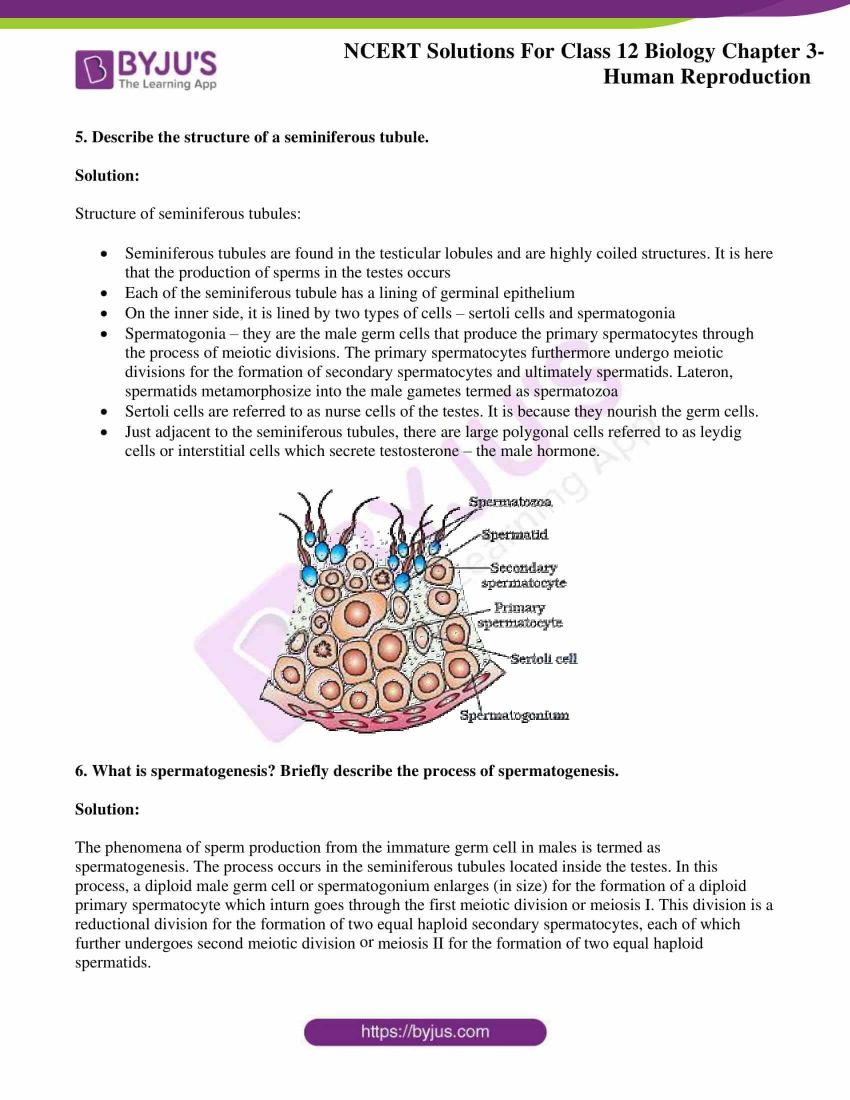 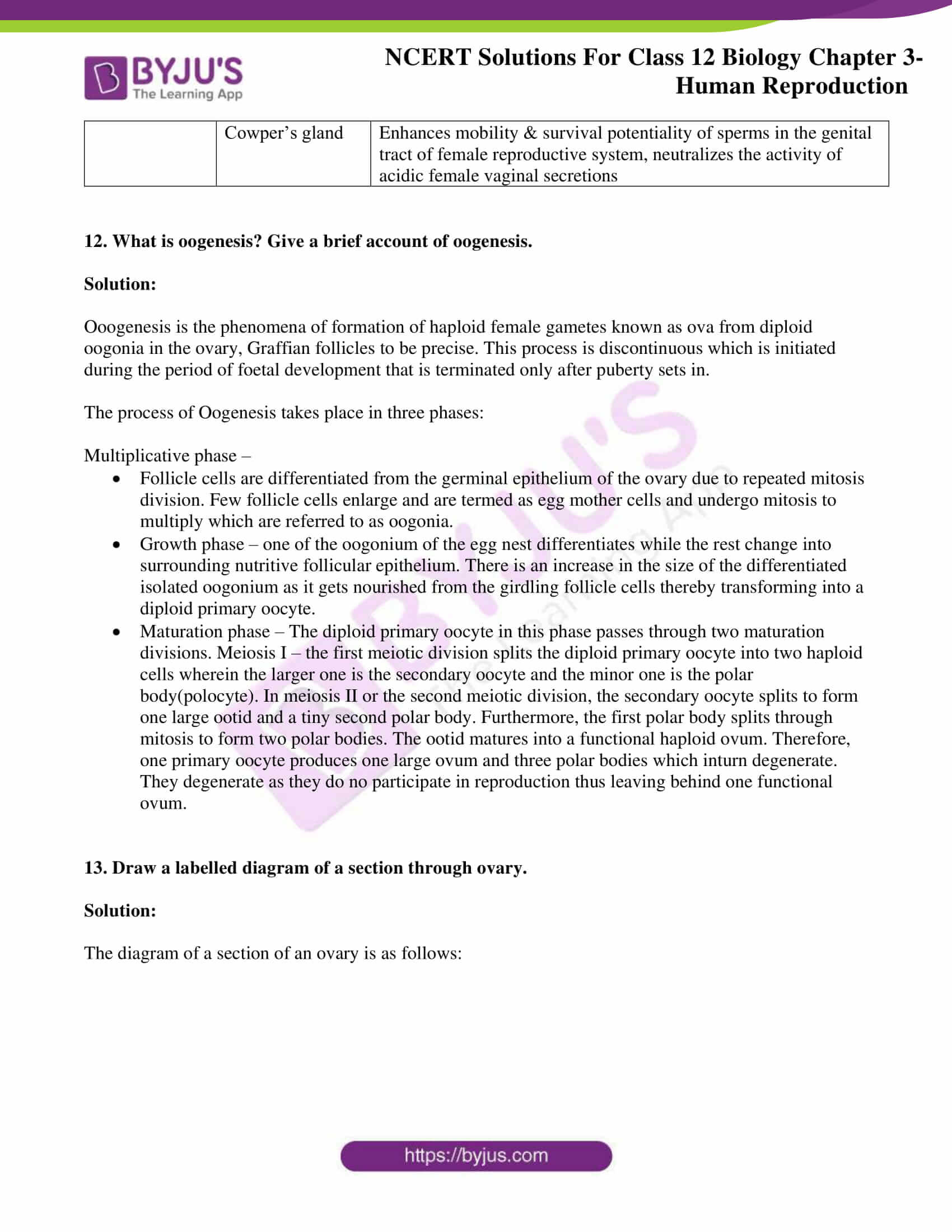 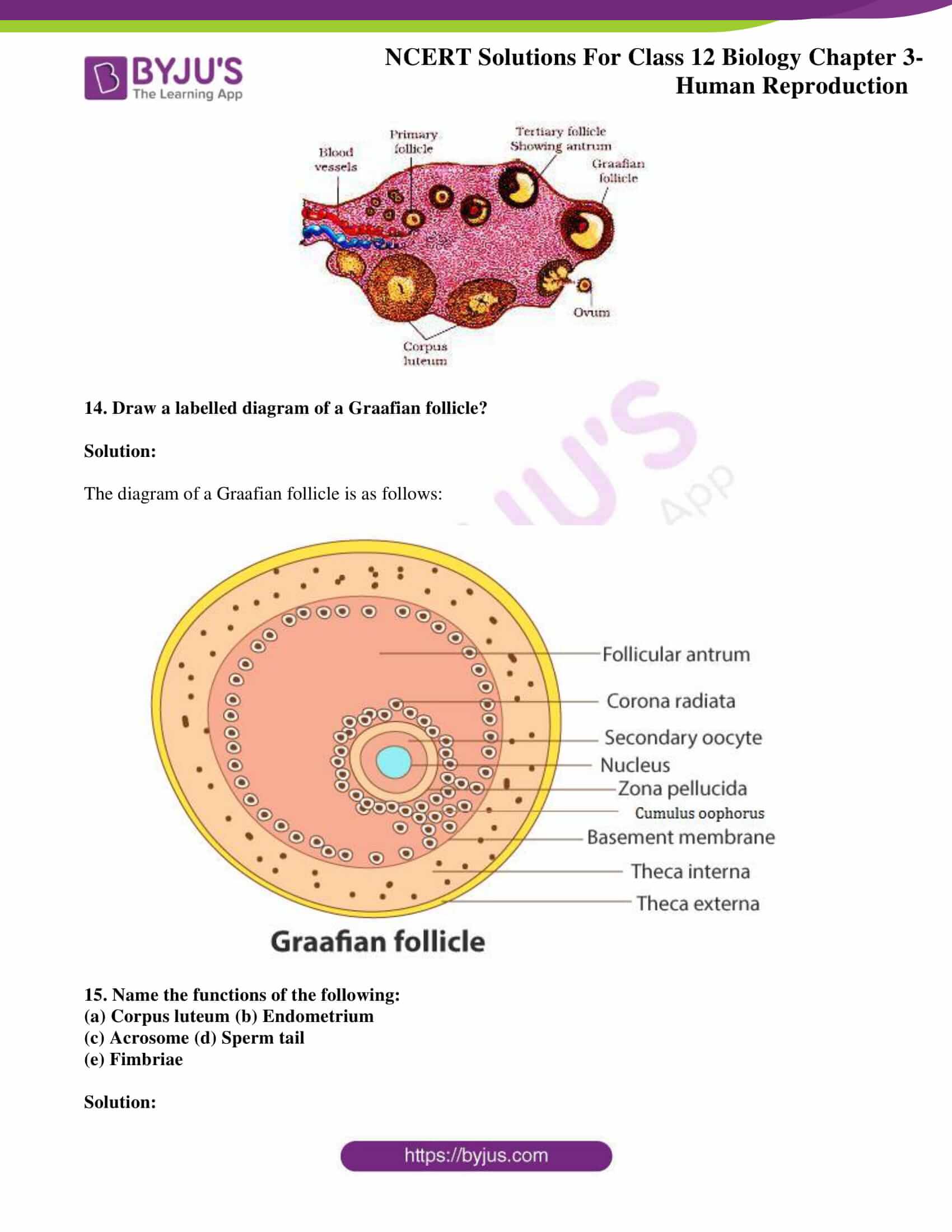 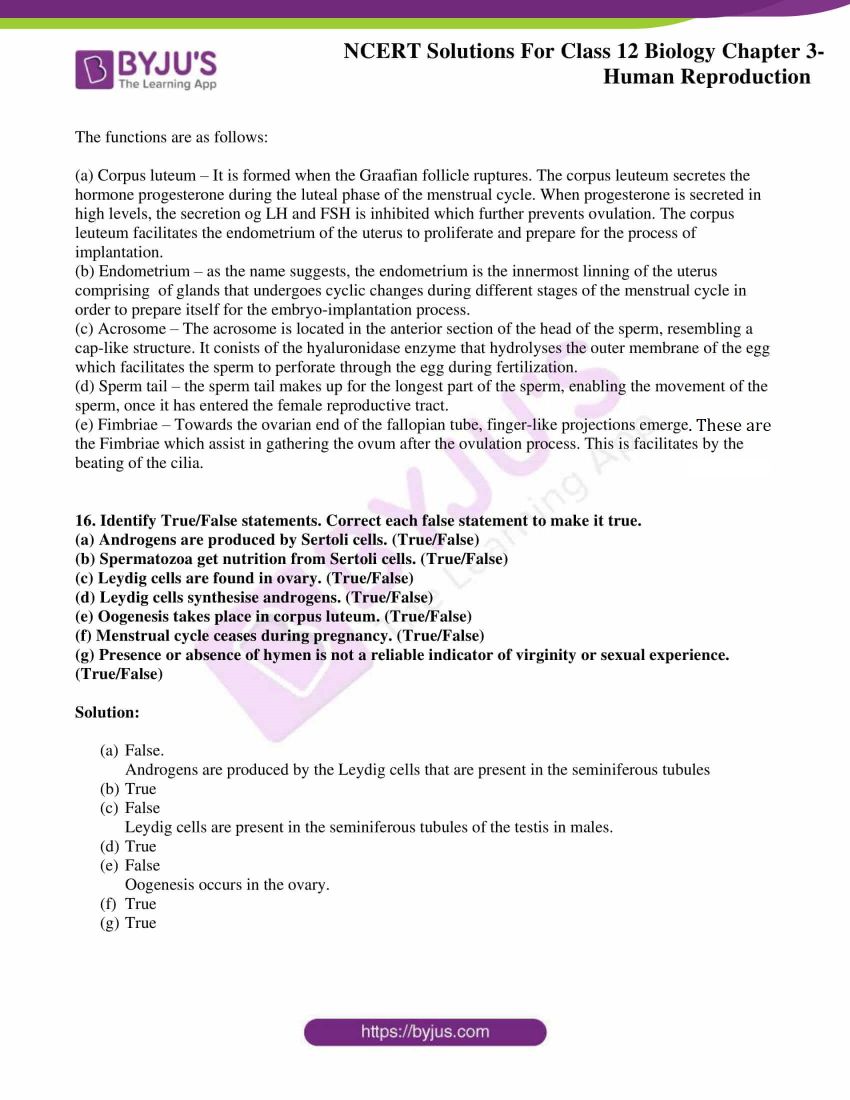 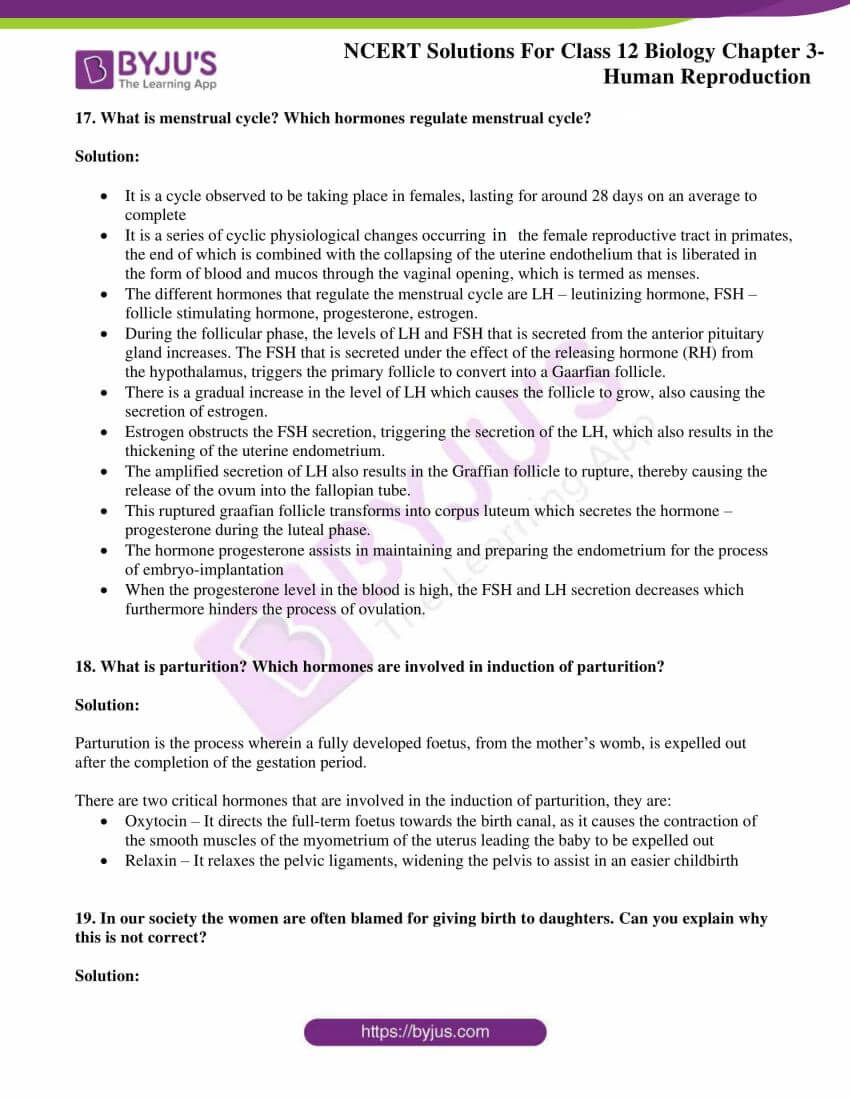 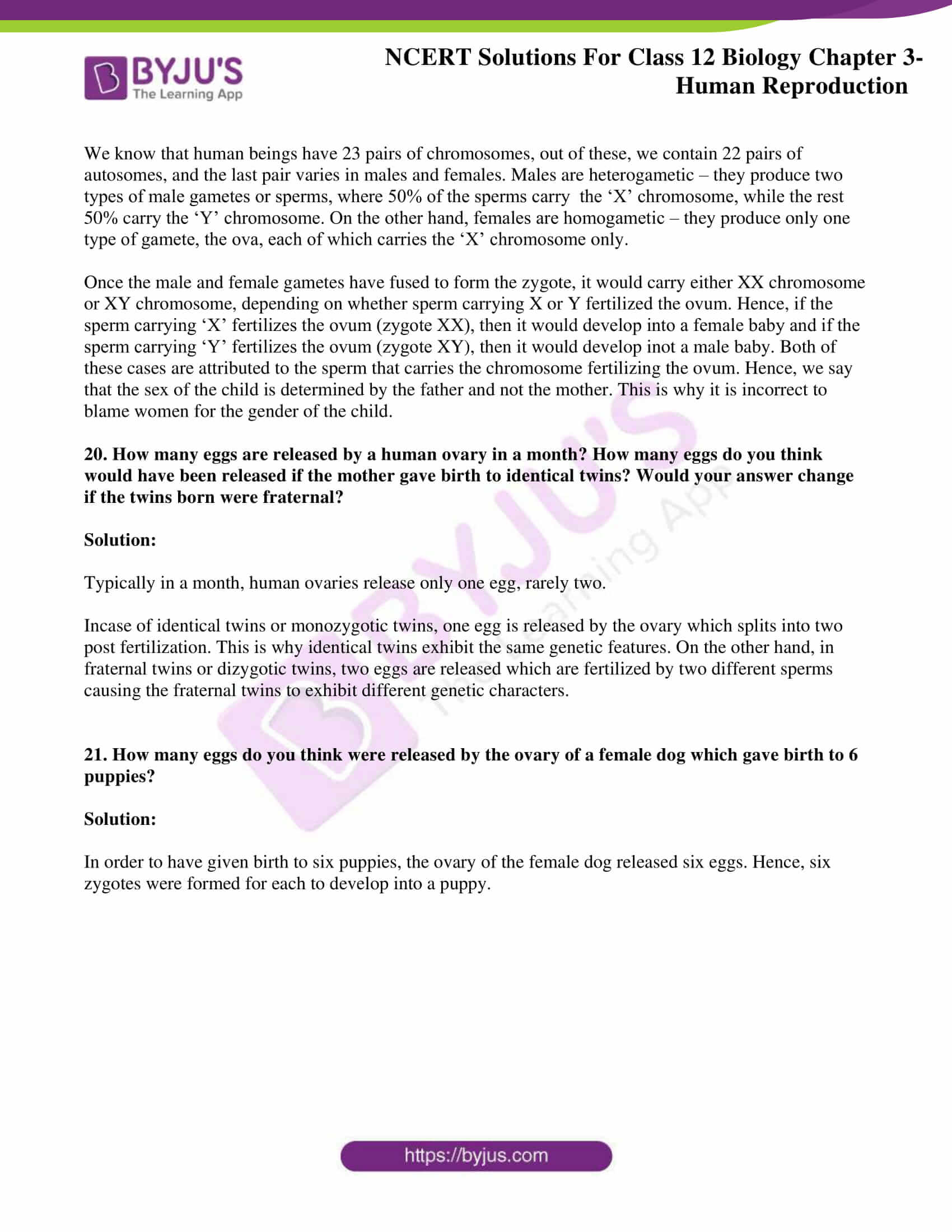 (k) The structure which provides a vascular connection between the foetus and uterus is called the _______.

(b) Humans are viviparous.

(c) Fertilisation is internal in humans.

(f) The process of release of ovum from a mature follicle is called ovulation.

(h) The fusion of male and female gametes is called fertilisation.

(i) Fertilisation takes place in the ampulla of the oviduct.

(j) Zygote divides to form a blastocyst, which is implanted in the uterus.

(k) The structure which provides a vascular connection between the foetus and the uterus is called the placenta.

2. Draw a labelled diagram of the male reproductive system.

The diagram of the male reproductive system is as follows: 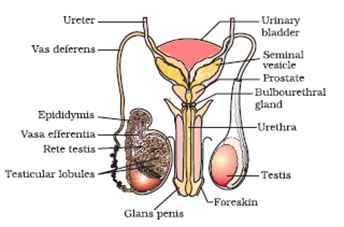 3. Draw a labelled diagram of the female reproductive system.

The diagram of the female reproductive system is as follows:

4. Write two major functions, each of the testis and ovary.

Two major functions of the testis and ovary are as follows:

5. Describe the structure of a seminiferous tubule.

The structure of seminiferous tubules is listed below: 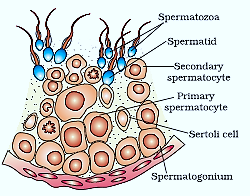 The phenomena of sperm production from the immature germ cell in males is termed as spermatogenesis. The process occurs in the seminiferous tubules located inside the testes. In this process, a diploid male germ cell or spermatogonium enlarges (in size) to form a diploid primary spermatocyte, which in turn goes through the first meiotic division or meiosis I. This division is a reductional division for the formation of two equal haploid secondary spermatocytes, each of which further undergoes a second meiotic division or meiosis II for the formation of two equal haploid spermatids.

Subsequently, four haploid spermatids are formed from a diploid spermatogonium. The spermatids, hence produced, alter to form spermatozoa (sperm) through the process of spermiogenesis.

7. Name the hormones involved in the regulation of spermatogenesis.

Some hormones involved in the regulation of spermatogenesis are as listed below:

Spermiogenesis – It is the phenomenon of the transformation of non-motile spermatids to mature, motile spermatozoa.

Spermiation – It is the phenomenon where mature spermatozoa are released from the Sertoli cells into the lumen of the seminiferous tubules of the testes.

9. Draw a labelled diagram of sperm.

The diagram of sperm is as below: 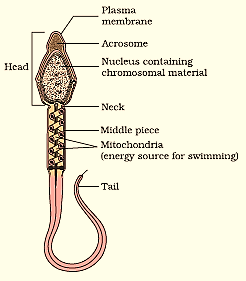 10. What are the major components of seminal plasma?

The major components of seminal plasma are as follows:

11. What are the major functions of male accessory ducts and glands?

The major functions of the male accessory ducts and glands are as follows:

12. What is oogenesis? Give a brief account of oogenesis.

Oogenesis is the phenomenon of the formation of haploid female gametes known as ova from diploid oogonia in the ovary, Graffian follicles, to be precise. This process is discontinuous, which is initiated during the period of foetal development that is terminated only after puberty sets in.

The process of oogenesis takes place in three phases, and they are listed below:

13. Draw a labelled diagram of a section through the ovary.

The diagram of a section of an ovary is as follows: 14. Draw a labelled diagram of a Graafian follicle.

The diagram of a Graafian follicle is as follows: 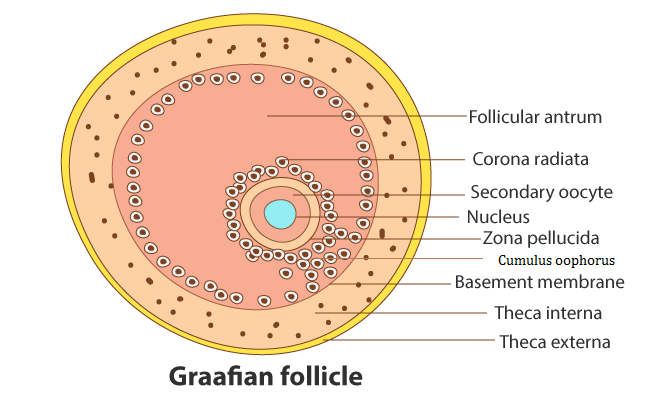 15. Mention the functions of the following:

(a) Corpus luteum (b) Endometrium

The functions are as follows:

(a) Corpus luteum – It is formed when the Graafian follicle ruptures. The corpus luteum secretes the hormone progesterone during the luteal phase of the menstrual cycle. When progesterone is secreted at high levels, the secretion of LH and FSH is inhibited, which further prevents ovulation. The corpus luteum facilitates the endometrium of the uterus to proliferate and prepare for the process of implantation.

(b) Endometrium – As the name suggests, the endometrium is the innermost lining of the uterus comprising glands that undergo cyclic changes during different stages of the menstrual cycle in order to prepare themselves for the embryo-implantation process.

(c) Acrosome – The acrosome is located in the anterior section of the head of the sperm, resembling a cap-like structure. It consists of the hyaluronidase enzyme that hydrolyses the outer membrane of the egg, which facilitates the sperm to perforate through the egg during fertilisation.

(d) Sperm tail – the sperm tail makes up for the longest part of the sperm, enabling the movement of the sperm once it has entered the female reproductive tract.

(e) Fimbriae – Towards the ovarian end of the fallopian tube, finger-like projections emerge. These are the Fimbriae which assist in gathering the ovum after the ovulation process. This is facilitated by the beating of the cilia.

(a) Androgens are produced by Sertoli cells. (True/False)

(b) Spermatozoa get nutrition from Sertoli cells. (True/False)

(c) Leydig cells are found in the ovary. (True/False)

(g) Presence or absence of a hymen is not a reliable indicator of virginity or sexual experience. (True/False)

Parturition is the process wherein a fully developed foetus from the mother’s womb is expelled after the completion of the gestation period.

The two critical hormones that are involved in the induction of parturition are as follows:

19. In our society, women are often blamed for giving birth to daughters. Can you explain why this is not correct?

Once the male and female gametes have fused to form the zygote, it would carry either XX chromosome or XY chromosome, depending on whether sperm carrying X or Y fertilised the ovum. Hence, if the sperm carrying ‘X’ fertilises the ovum (zygote XX), it will develop into a female baby, and if the sperm carrying ‘Y’ fertilises the ovum (zygote XY), it will develop into a male baby. Both of these cases are attributed to the sperm that carries the chromosome fertilising the ovum. Hence, we can say that the sex of the child is determined by the father and not the mother. This is why it is incorrect to blame women for the gender of the child.

20. How many eggs are released by a human ovary in a month? How many eggs do you think would have been released if the mother gave birth to identical twins? Would your answer change if the twins born were fraternal?

Typically in a month, human ovaries release only one egg, rarely two.

In the case of identical twins or monozygotic twins, one egg is released by the ovary, which splits into two post-fertilisation. This is why identical twins exhibit the same genetic features. On the other hand, in fraternal twins or dizygotic twins, two eggs are released, which are fertilised by two different sperms causing the fraternal twins to exhibit different genetic characteristics.

21. How many eggs do you think were released by the ovary of a female dog which gave birth to 6 puppies?

In order to have given birth to six puppies, the ovary of the female dog released six eggs. Hence, six zygotes were formed for each to develop into a puppy.

NCERT Solutions for Class 12 Biology Chapter 3 – Human reproduction is categorised under Unit – Reproduction. Reproduction is a huge topic that involves the process of fertilisation and hence the birth of offspring. It can be carried out by plants and animals in the following two ways:

As per previous trends, the chapter grouped under Unit – Reproduction carries 14 marks, approximately up to 20%. Hence, students are required to focus on studying the chapter thoroughly, paying detail to every topic, in order to score well in the Biology subject.

Why should I use the NCERT Solutions for Class 12 Biology Chapter 3 while preparing for the board exam?

The NCERT Solutions for Class 12 Biology Chapter 3 provides students with simple and stepwise answers to the questions present in the textbook. The solutions are helpful in understanding the method of answering the questions in the board exam. Students can save time and fasten their revision which is very effective for exam preparation. The expert teachers at BYJU’S have designed the solutions based on the latest CBSE Syllabus and its guidelines.

What are the topics covered under Chapter 3 of NCERT Solutions for Class 12 Biology?

What is the meaning of reproduction in Chapter 3 of NCERT Solutions for Class 12 Biology?

Reproduction means to reproduce. It is a biological process by which an organism reproduces offspring biologically similar to itself. Reproduction enables and ensures the continuity of species, generation after generation. It is the main feature of life on earth.