RD Sharma Solution for Class 9 Chapter 7 includes several exercises on the of Euclid’s Geometry to help the students practice and learn the concepts of the chapter more effectively. Euclid, a Greek Mathematician employed some of his axioms and theorems to study planes and other solid figures. Euclid’s system is considered an extremely deductive, comprehensive and logical approach towards geometry. Though Euclid’s geometry is also about shapes, lines and angles, the students need to have an in-depth understanding of the topics to be able to understand how the shapes, lines and angles interact with each other.

Students can download  RD Sharma Solutions class 9  for all chapters enlisted in the textbook. 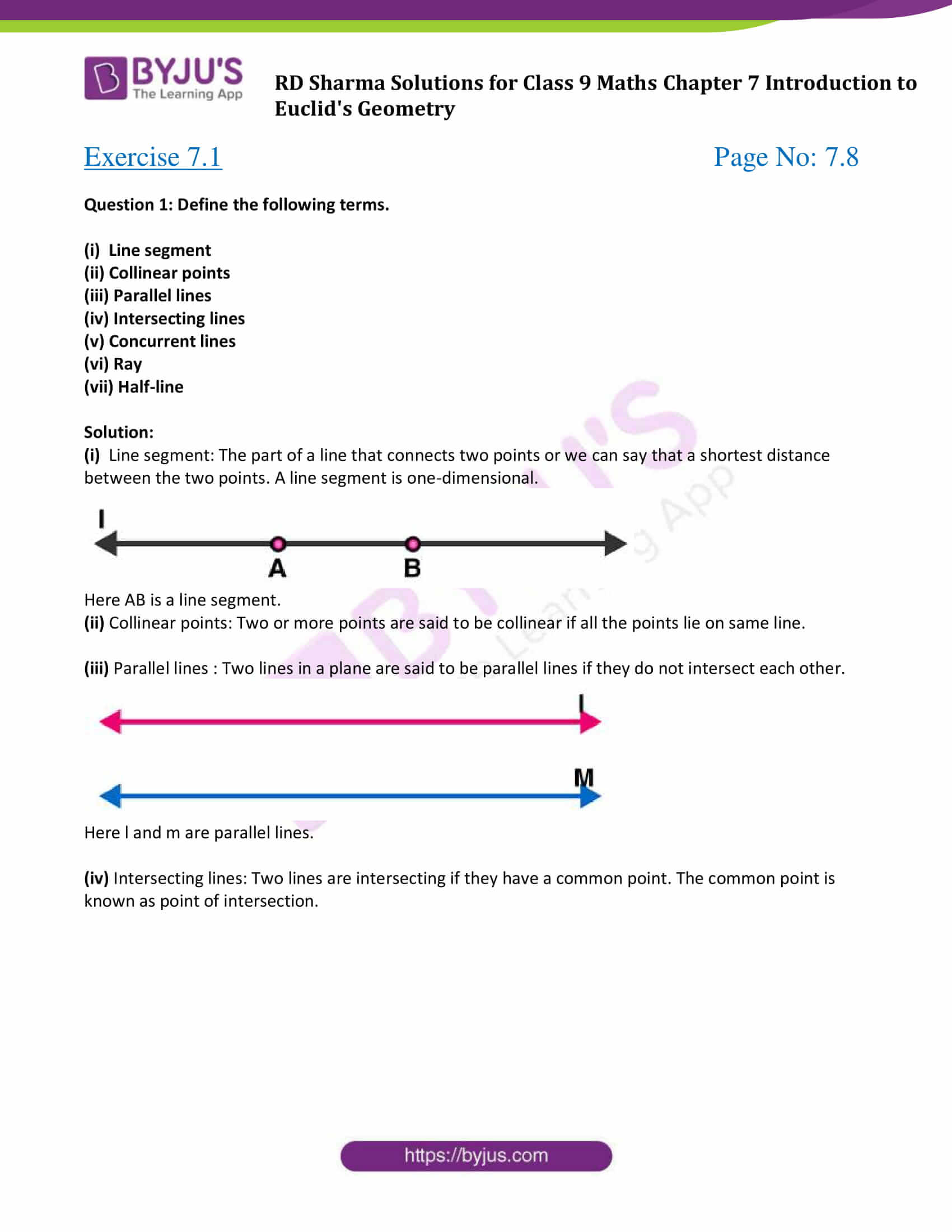 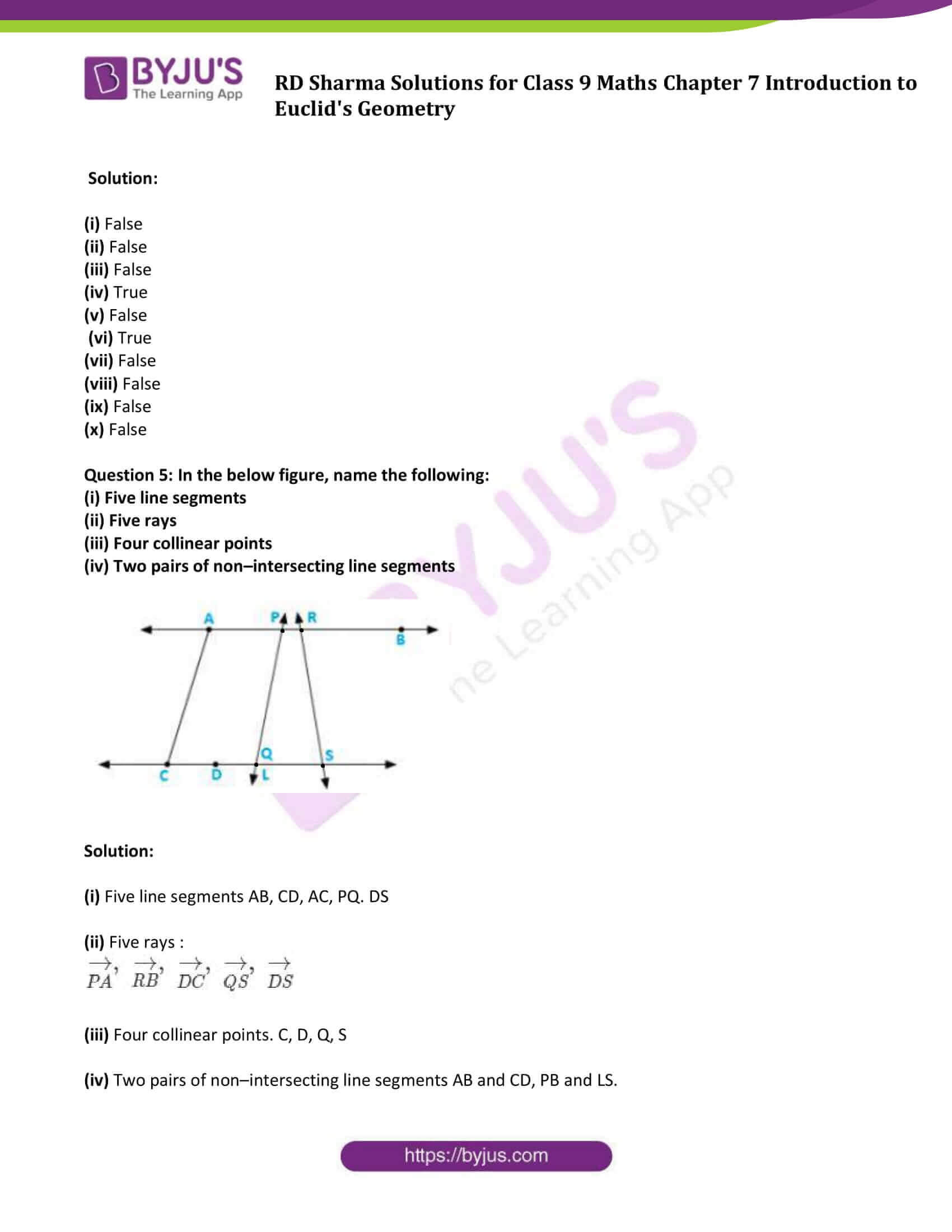 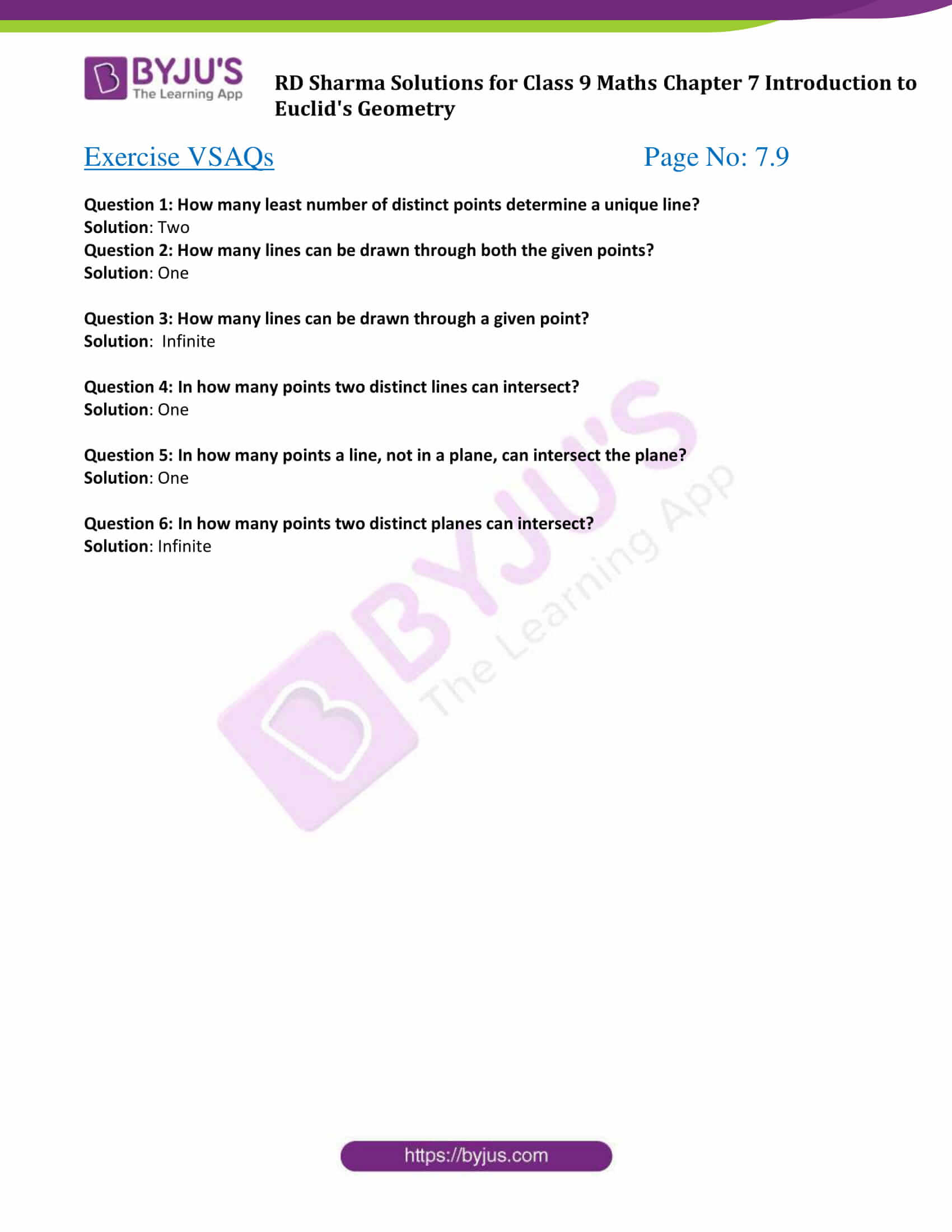 (i) Line segment: The part of a line that connects two points or we can say that a shortest distance between the two points. A line segment is one-dimensional.

Here AB is a line segment.

(ii) Collinear points: Two or more points are said to be collinear if all the points lie on same line.

(iii) Parallel lines : Two lines in a plane are said to be parallel lines if they do not intersect each other. 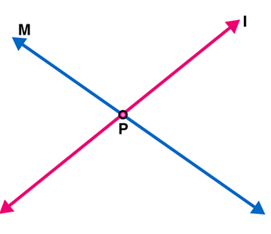 Here l and M are intersecting lines. And P is point of intersection.

(v) Concurrent lines: Two or more lines are said to be concurrent if there is a point which lies on all of them. 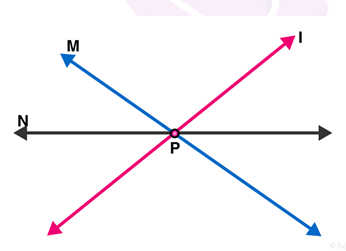 (vi) Ray: A straight line extending from a point indefinitely in one direction only.

Here OA is a ray.

(vii) Half-line: If A, B. C be the points on a line l, such that A lies between B and C, and we delete the point A from line l, the two parts of l that remain are each called a half-line.

(i) How many lines can pass through a given point?

(ii) In how many points can two distinct lines at the most intersect?

(i) Given two points P and Q. Find how many line segments do they determine.

Question 4: Write the truth value (T/F) of each of the following statements:

(i) Two lines intersect in a point.

(iii) A segment has no length.

(v) Every ray has a finite length.

(vi) A ray has one end-point only.

(vii) A segment has one end-point only.

(ix) Only a single line may pass through a given point.

Question 5: In the below figure, name the following: Question 6: Fill in the blanks so as to make the following statements true:

Question 1: How many least number of distinct points determine a unique line?

Question 2: How many lines can be drawn through both the given points?

Question 3: How many lines can be drawn through a given point?

Question 4: In how many points two distinct lines can intersect?

Question 5: In how many points a line, not in a plane, can intersect the plane?

Question 6: In how many points two distinct planes can intersect?

In the 7th chapter of class 9 RD Sharma Solutions students will study important concepts on Introduction to Euclid’s Geometry as listed below: