NCERT exemplar chemistry class 11 Chapter 11 P block Elements is provided here for the assistance of students who are preparing for CBSE class 11, engineering and medical entrance examinations. In order to understand the topic completely, it is very important for the students to get well versed with this exemplar solution.

Studying this exemplar thoroughly will help you in grasping the concepts and you can make p block elements class 11 important notes which will come handy during the revision of the topic. 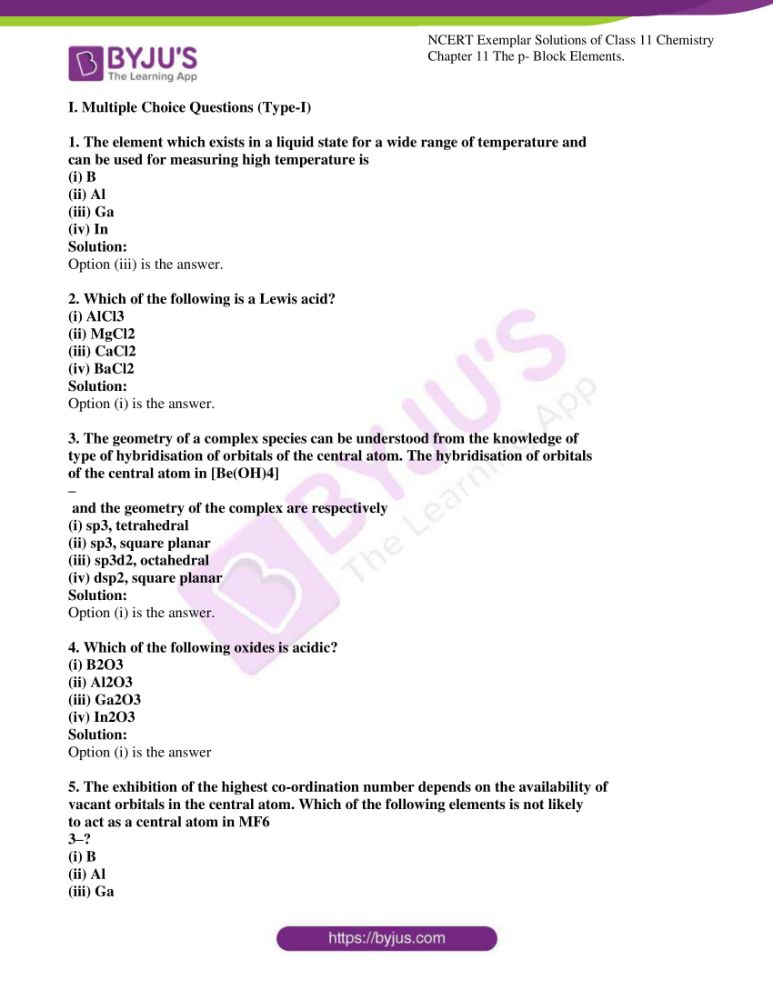 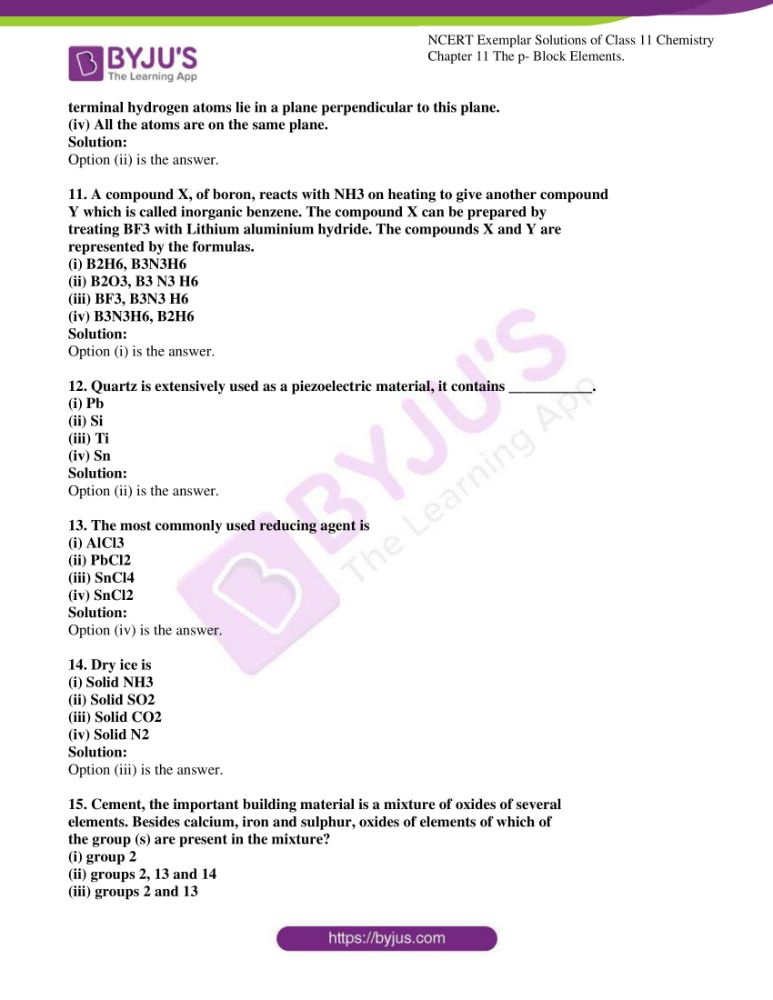 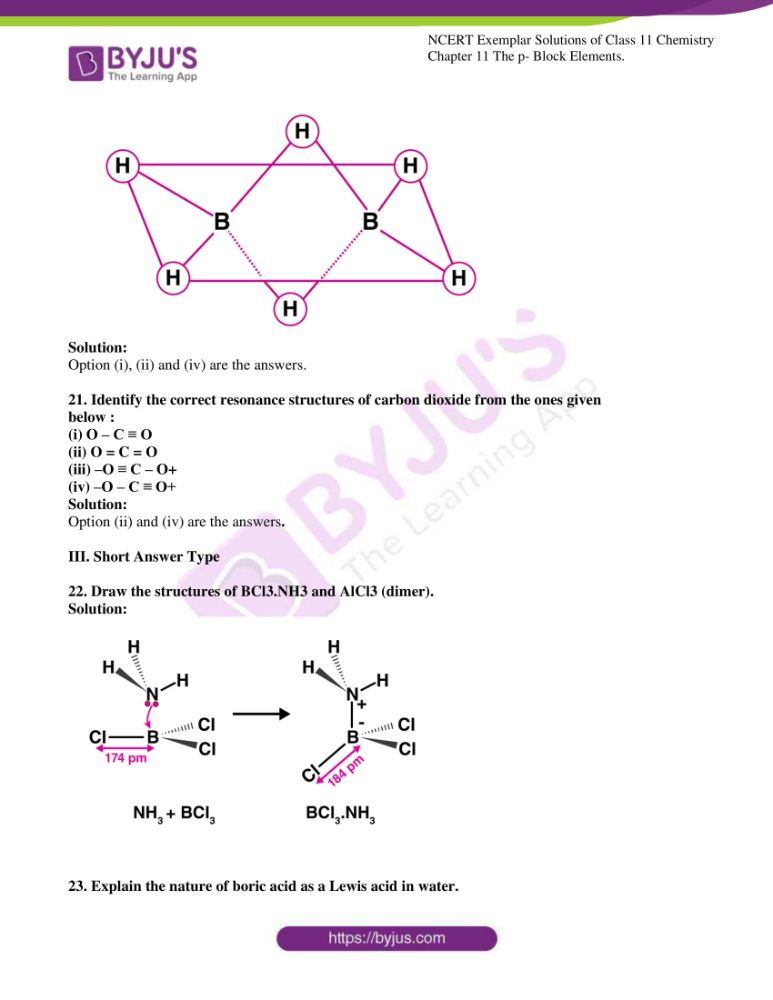 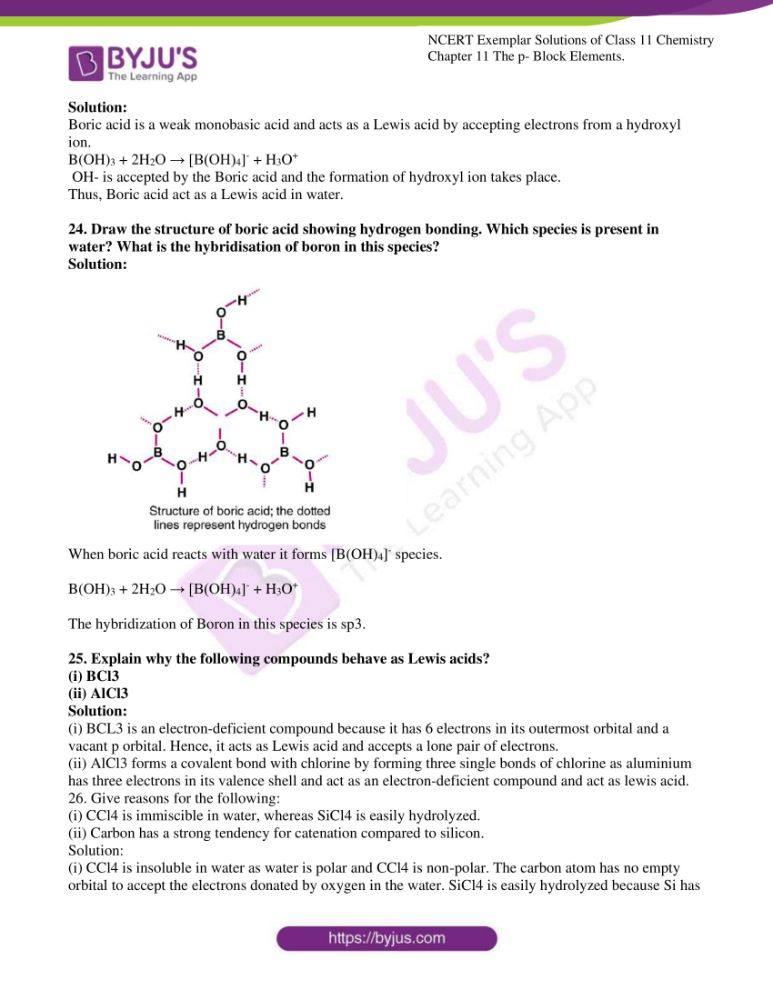 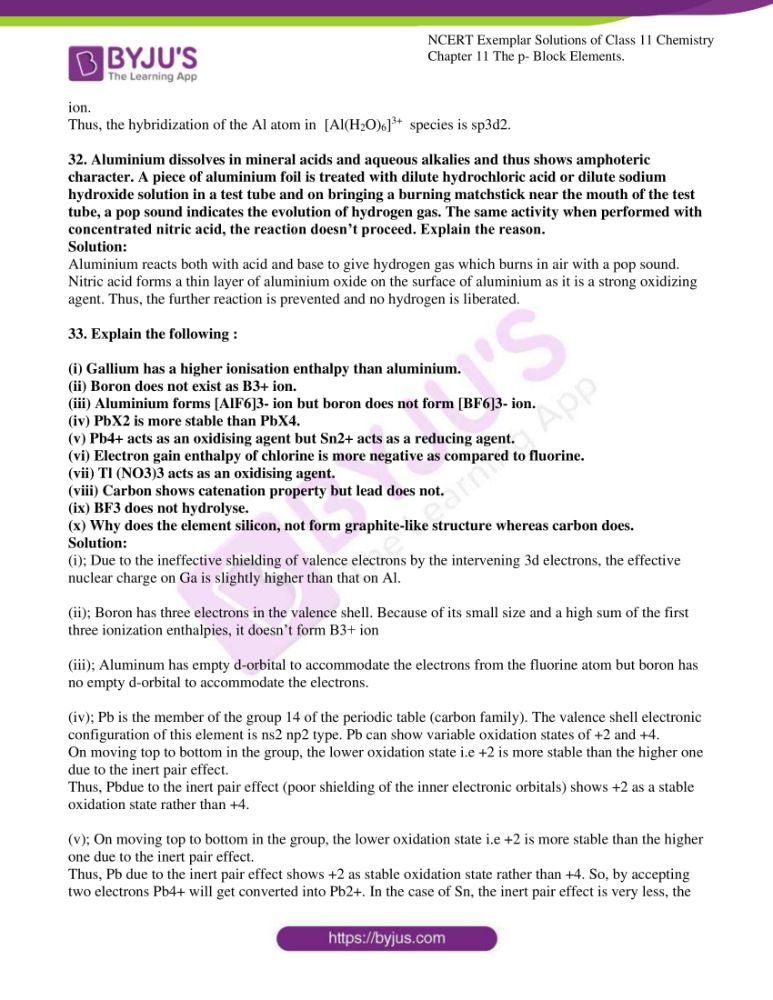 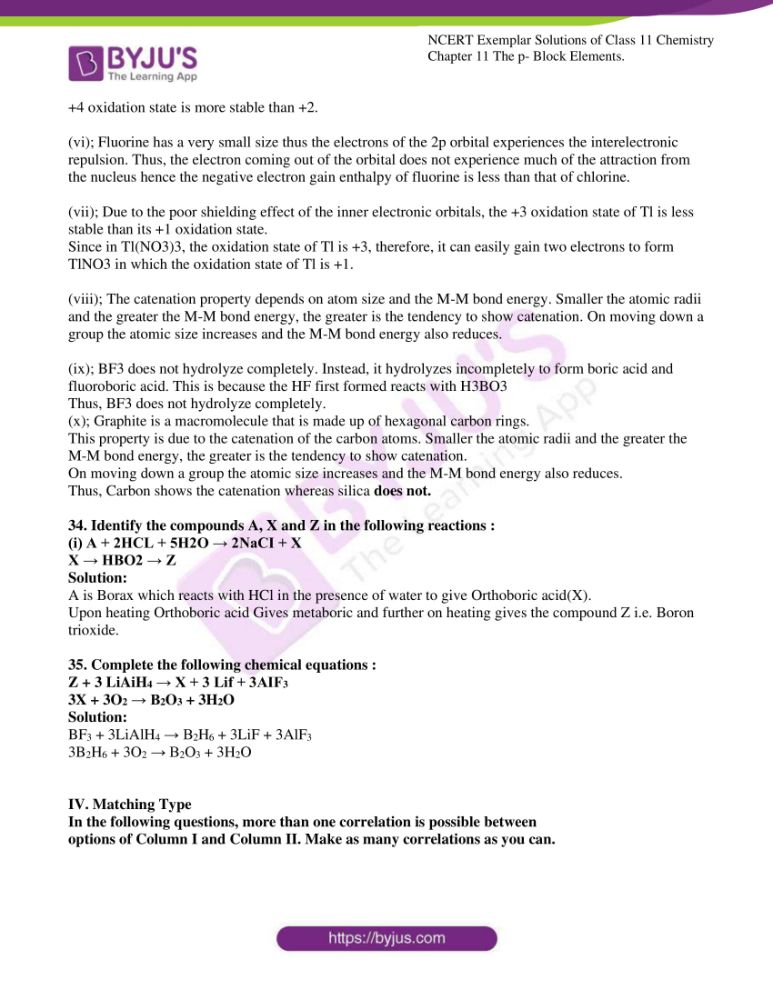 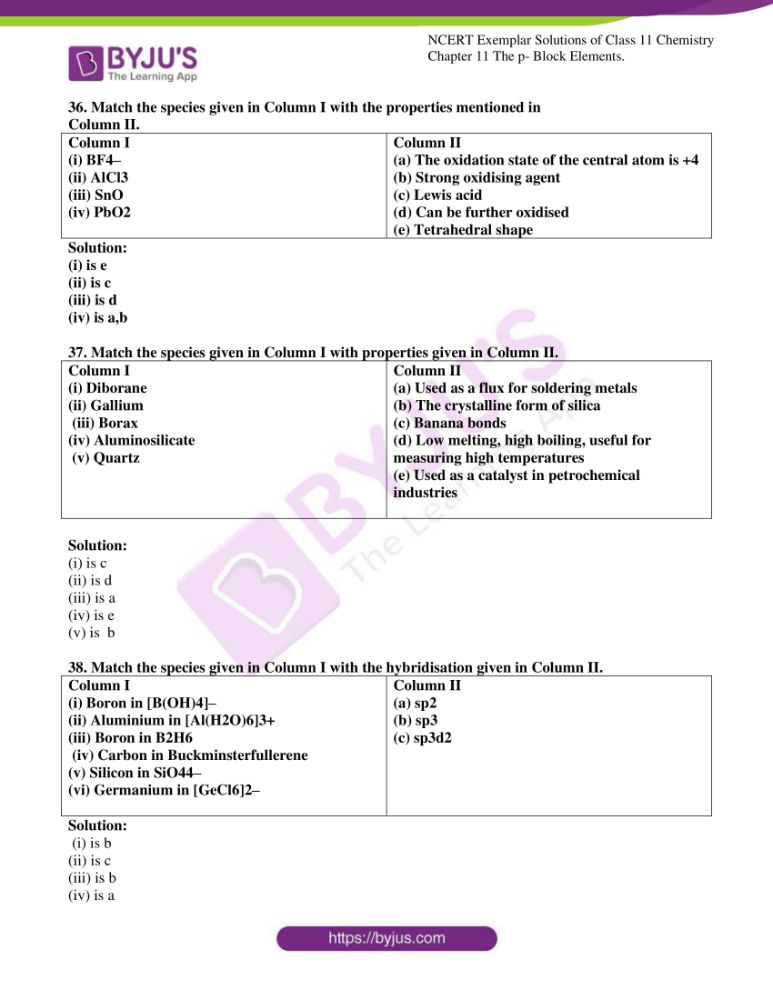 1. The element which exists in a liquid state for a wide range of temperature and

can be used for measuring high temperature is

2. Which of the following is a Lewis acid?

3. The geometry of a complex species can be understood from the knowledge of

and the geometry of the complex are respectively

4. Which of the following oxides is acidic?

5. The exhibition of the highest co-ordination number depends on the availability of

vacant orbitals in the central atom. Which of the following elements is not likely

to act as a central atom in MF6

6. Boric acid is an acid because its molecule

(ii) gives up a proton

(iv) combines with a proton from the water molecule

configuration of atoms. The tendency of catenation in Group 14 elements

8. Silicon has a strong tendency to form polymers like silicones. The chain length

of silicone, a polymer can be controlled by adding

kJ mol–1) for the elements of Group 13 follows the order.

10. In the structure of diborane

perpendicular to this plane.

and 2 bridging hydrogen atoms lie in the perpendicular plane.

terminal hydrogen atoms lie in a plane perpendicular to this plane.

(iv) All the atoms are on the same plane.

11. A compound X, of boron, reacts with NH3 on heating to give another compound

Y which is called inorganic benzene. The compound X can be prepared by

treating BF3 with Lithium aluminium hydride. The compounds X and Y are

represented by the formulas.

13. The most commonly used reducing agent is

15. Cement, the important building material is a mixture of oxides of several

elements. Besides calcium, iron and sulphur, oxides of elements of which of

the group (s) are present in the mixture?

(i) poor screening effect of d and f orbitals

(i) sp3 hybridisation of carbon

18. Me3SiCl is used during polymerisation of organic silicones because

(ii) Me3SiCl blocks the end terminal of a silicone polymer

(iii) Me3SiCl improves the quality and yield of the polymer

19. Which of the following statements are correct?

(i) Fullerenes have dangling bonds

(iii) Graphite is a thermodynamically most stable allotrope of carbon

20. Which of the following statements are correct. Answer based on Fig.11.1.

(i) The two bridged hydrogen atoms and the two boron atoms lie in one plane;

(ii) Out of six B–H bonds two bonds can be described in terms of 3 centre 2-electron bonds.

(iii) Out of six B-H bonds, four B-H bonds can be described in terms of 3 centres 2 electron bonds; 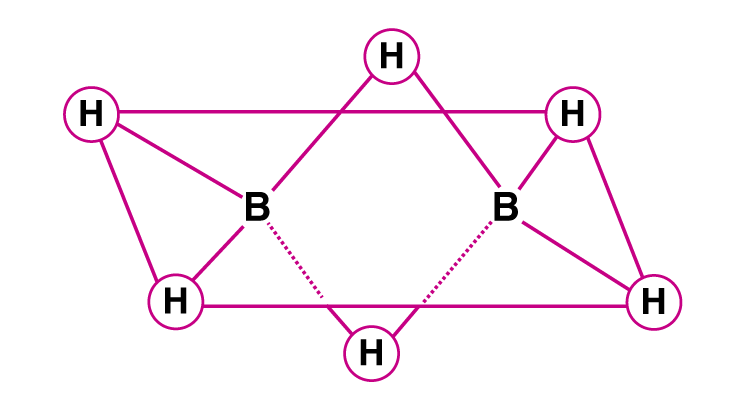 21. Identify the correct resonance structures of carbon dioxide from the ones given 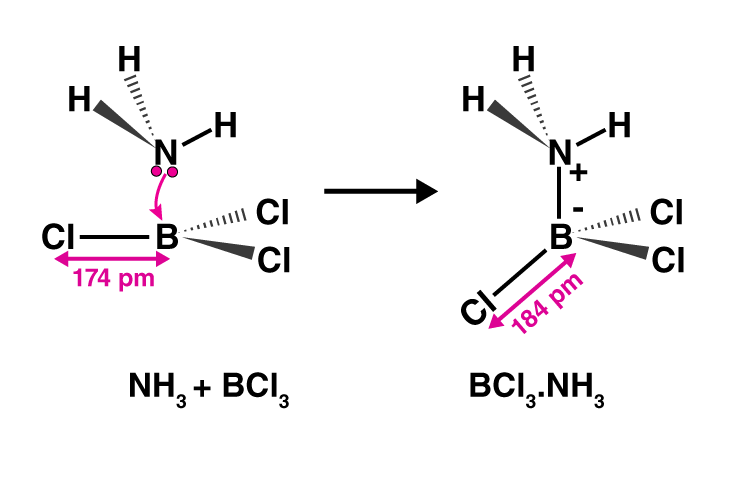 23. Explain the nature of boric acid as a Lewis acid in water.

Boric acid is a weak monobasic acid and acts as a Lewis acid by accepting electrons from a hydroxyl ion.

OH- is accepted by the Boric acid and the formation of hydroxyl ion takes place.

Thus, Boric acid act as a Lewis acid in water.

24. Draw the structure of boric acid showing hydrogen bonding. Which species is present in water? What is the hybridisation of boron in this species? 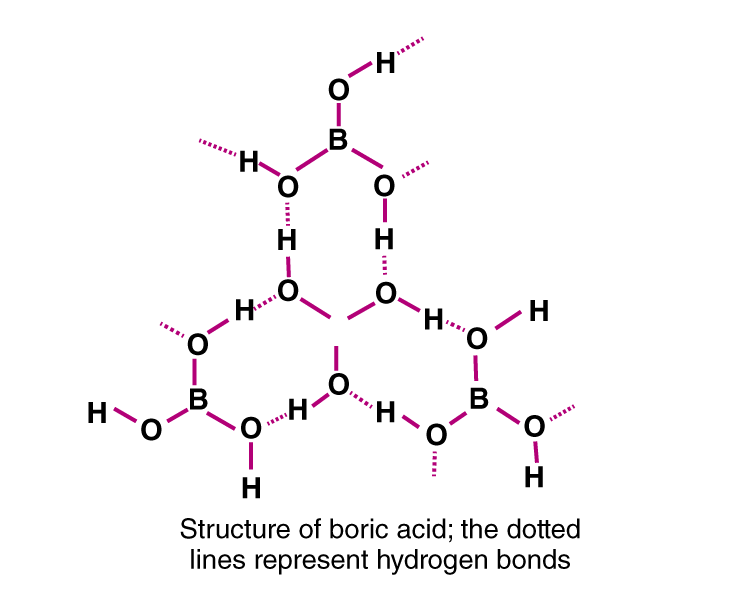 When boric acid reacts with water it forms [B(OH)4]– species.

The hybridization of Boron in this species is sp3.

25. Explain why the following compounds behave as Lewis acids?

(i) BCL3 is an electron-deficient compound because it has 6 electrons in its outermost orbital and a vacant p orbital. Hence, it acts as Lewis acid and accepts a lone pair of electrons.

(ii) AlCl3 forms a covalent bond with chlorine by forming three single bonds of chlorine as aluminium has three electrons in its valence shell and act as an electron-deficient compound and act as lewis acid.

26. Give reasons for the following:

(i) CCl4 is immiscible in water, whereas SiCl4 is easily hydrolyzed.

(ii) Carbon has a strong tendency for catenation compared to silicon.

(i) CCl4 is insoluble in water as water is polar and CCl4 is non-polar. The carbon atom has no empty orbital to accept the electrons donated by oxygen in the water. SiCl4 is easily hydrolyzed because Si has an empty d orbital to accommodate the electrons from oxygen atom of water.

(ii) The energy difference between the Carbon-Carbon and silicon-silicon bond energy is very high i.e. the tendency of carbon to form catenation is greater than the silicon.

(ii) Silicon forms SiF62- ion whereas the corresponding fluoro compound of carbon is not known.

(ii) Silicon has lower energy 3-d orbital so it can expand its octet givingsp3d2 hybridization while d-orbitals are not present in the valence shell of carbon. It can undergo sp3-hybridisation only. The size of the carbon atom is very small to accommodate six F- anions.

Due to the poor shielding of s orbital electrons by d and f orbitals, the tendency of s orbital to form the bond and will decreases down the group from group 13 and 14.

29. Carbon and silicon both belong to the group 14, but despite the stoichiometric similarity, the dioxides, (i.e., carbon dioxide and silicon dioxide), differ in their structures. Comment.

Carbon can form stable pπ-pπ bonding with itself and other small atoms like oxygen and nitrogen due to its small size.it carbon dioxide each oxygen atom is double-bonded with the carbon atom with pπ-pπ overlapping. Silicon cannot form this bonding because of its large size.

30. If a trivalent atom replaces a few silicon atoms in a three-dimensional network of silicon dioxide, what would be the type of charge on an overall structure?

If a few tetrahedral Si atoms in a three-dimensional network structure of SiO2 are replaced by an equal number of trivalent atoms, then one valence electron of each Si atom will become free.

As a result, the substitution of each Si atom by a trivalent atom will introduce one unit negative charge into the three-dimensional network structure of the SiO2.

31. When BCl3 is treated with water, it hydrolyses and forms [B[OH]4]- only whereas AlCl3 in acidified aqueous solution forms [Al (H2O)6]3+ ion. Explain what is the hybridisation of boron and aluminium in these species?

32. Aluminium dissolves in mineral acids and aqueous alkalies and thus shows amphoteric character. A piece of aluminium foil is treated with dilute hydrochloric acid or dilute sodium hydroxide solution in a test tube and on bringing a burning matchstick near the mouth of the test tube, a pop sound indicates the evolution of hydrogen gas. The same activity when performed with concentrated nitric acid, the reaction doesn’t proceed. Explain the reason.

Aluminium reacts both with acid and base to give hydrogen gas which burns in air with a pop sound. Nitric acid forms a thin layer of aluminium oxide on the surface of aluminium as it is a strong oxidizing agent. Thus, the further reaction is prevented and no hydrogen is liberated.

(i) Gallium has a higher ionisation enthalpy than aluminium.

(v) Pb4+ acts as an oxidising agent but Sn2+ acts as a reducing agent.

(vi) Electron gain enthalpy of chlorine is more negative as compared to fluorine.

(viii) Carbon shows catenation property but lead does not.

(ix) BF3 does not hydrolyse.

(x) Why does the element silicon, not form graphite-like structure whereas carbon does.

(i); Due to the ineffective shielding of valence electrons by the intervening 3d electrons, the effective nuclear charge on Ga is slightly higher than that on Al.

(ii); Boron has three electrons in the valence shell. Because of its small size and a high sum of the first three ionization enthalpies, it doesn’t form B3+ ion

(iv); Pb is the member of the group 14 of the periodic table (carbon family). The valence shell electronic configuration of this element is ns2 np2 type. Pb can show variable oxidation states of +2 and +4.

On moving top to bottom in the group, the lower oxidation state i.e +2 is more stable than the higher one due to the inert pair effect.

Thus, Pbdue to the inert pair effect (poor shielding of the inner electronic orbitals) shows +2 as a stable oxidation state rather than +4.

(v); On moving top to bottom in the group, the lower oxidation state i.e +2 is more stable than the higher one due to the inert pair effect.

(vi); Fluorine has a very small size thus the electrons of the 2p orbital experiences the interelectronic repulsion. Thus, the electron coming out of the orbital does not experience much of the attraction from the nucleus hence the negative electron gain enthalpy of fluorine is less than that of chlorine.

(ix); BF3 does not hydrolyze completely. Instead, it hydrolyzes incompletely to form boric acid and fluoroboric acid. This is because the HF first formed reacts with H3BO3

Thus, BF3 does not hydrolyze completely.

(x); Graphite is a macromolecule that is made up of hexagonal carbon rings.

This property is due to the catenation of the carbon atoms. Smaller the atomic radii and the greater the M-M bond energy, the greater is the tendency to show catenation.

On moving down a group the atomic size increases and the M-M bond energy also reduces.

Thus, Carbon shows the catenation whereas silica does not.

34. Identify the compounds A, X and Z in the following reactions :

A is Borax which reacts with HCl in the presence of water to give Orthoboric acid(X).

In the following questions, more than one correlation is possible between

options of Column I and Column II. Make as many correlations as you can.

36. Match the species given in Column I with the properties mentioned in

of Reason (R) is given. Choose the correct option out of the choices given

39. Assertion (A): If aluminium atoms replace a few silicon atoms in three

the dimensional network of silicon dioxide, the overall structure

Reason (R): Aluminium is trivalent while silicon is tetravalent.

(iii) Both A and R are not correct

40. Assertion (A): Silicons are water-repelling in nature.

Reason (R): Silicons are organosilicon polymers, which have (–R2SiO–) as

(i) A and R both are correct and R is the correct explanation of A.

For chapter-wise NCERT exemplars of science and maths subjects of all the classes visit BYJU’S website or download BYJU’S learning App to prepare well for your CBSE examination.