NCERT Exemplar Chemistry Class 11 Chapter 2 Structure of Atom is the best study material you can rely upon to prepare for CBSE Class 11 and entrance exam preparation. Studying this exemplar solution will help you in grasping the concepts deeply and you can easily take out chemistry Chapter 2 Class 11 notes to help you in revising the chapter.

When students study chapter 2, they will basically be learning about the experimental observations made by scientists in the field of chemistry. Students will also get to know about how electron, proton, and neutron were discovered and learn their characteristics. They will also be introduced to concepts like Thomson, Rutherford, and Bohr atomic models. While the chapter needs more attention students should understand each topic clearly. We are providing free NCERT Exemplar for Class 11 Chemistry Chapter 2 – the structure of atom here. The exemplar can be easily downloaded in the form of a PDF and has been designed to help the students to have productive study time. The exemplar contains well-written answers for all types of questions given at the end of the chapter. This will further enable students to complete assignments and to tackle any type of question that can be asked in the exams. 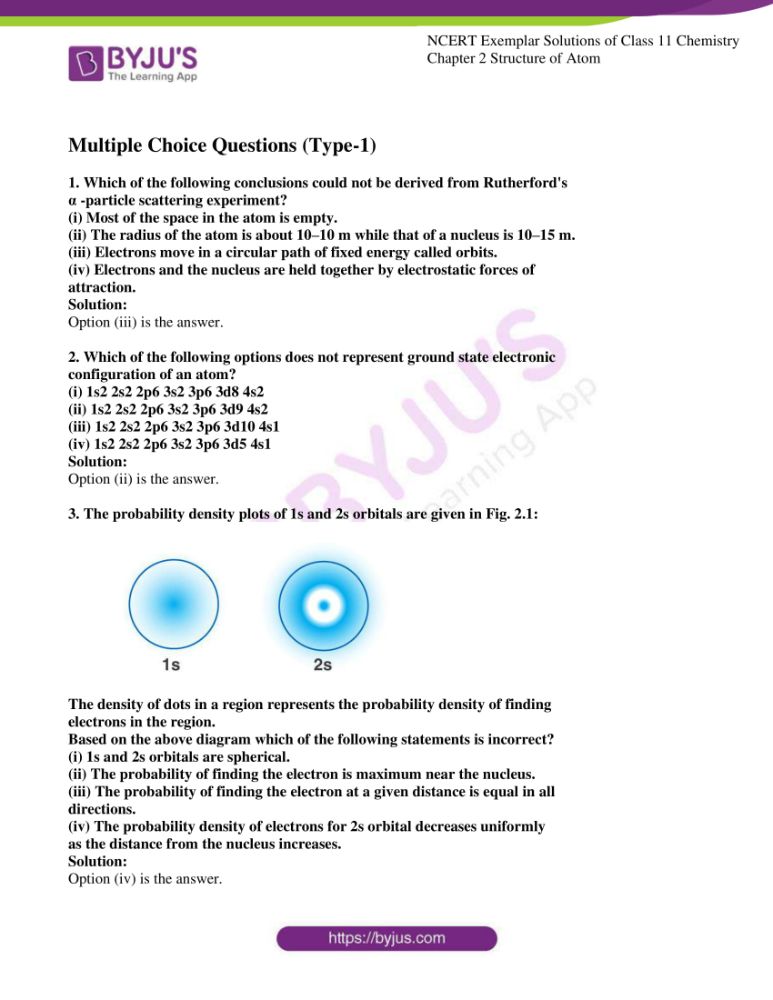 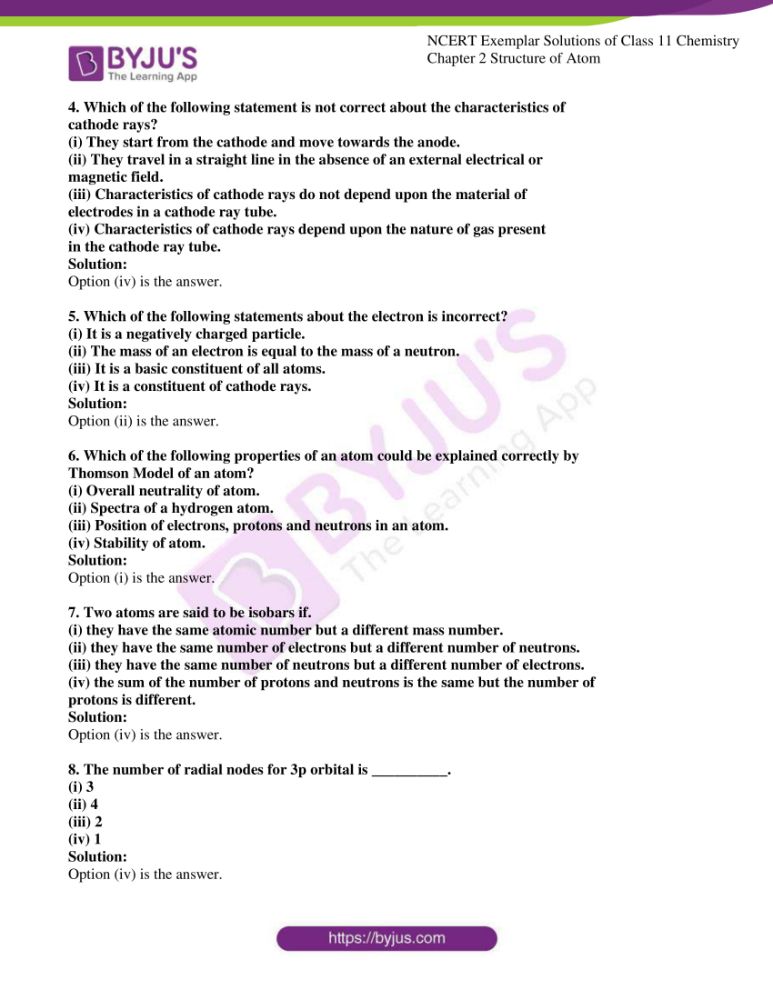 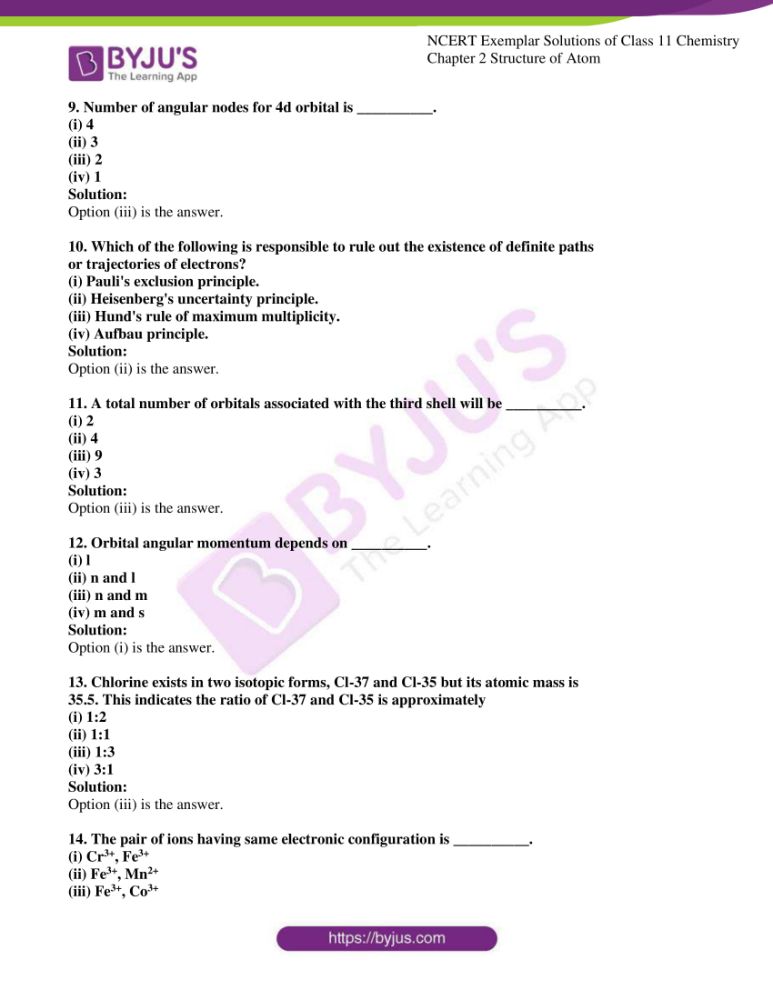 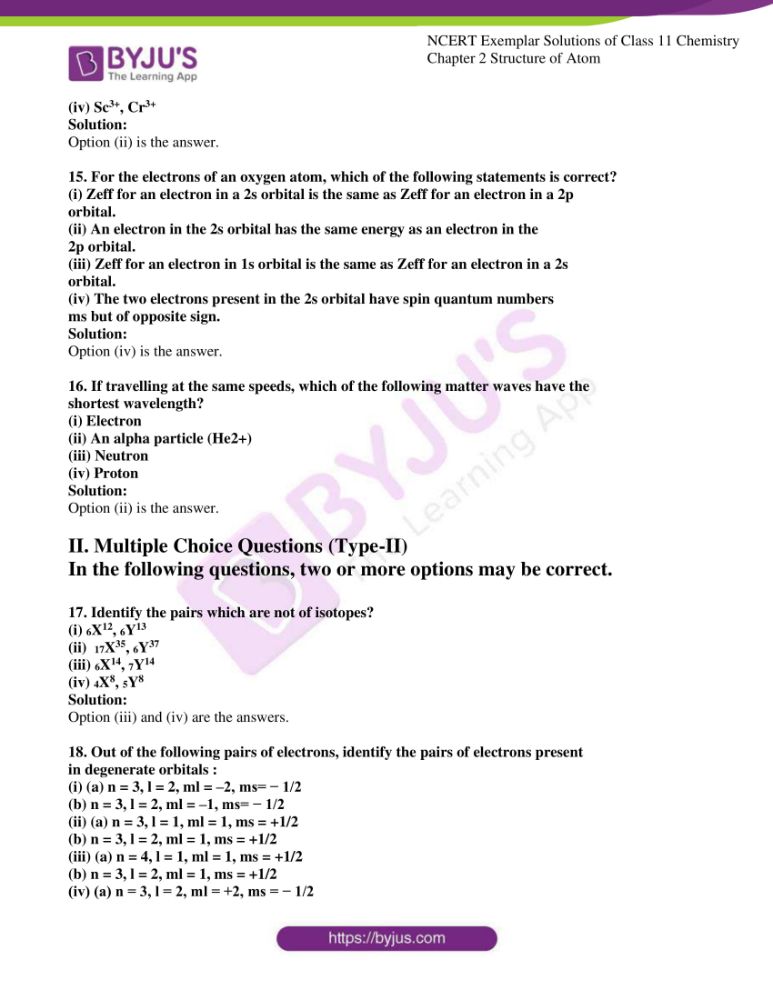 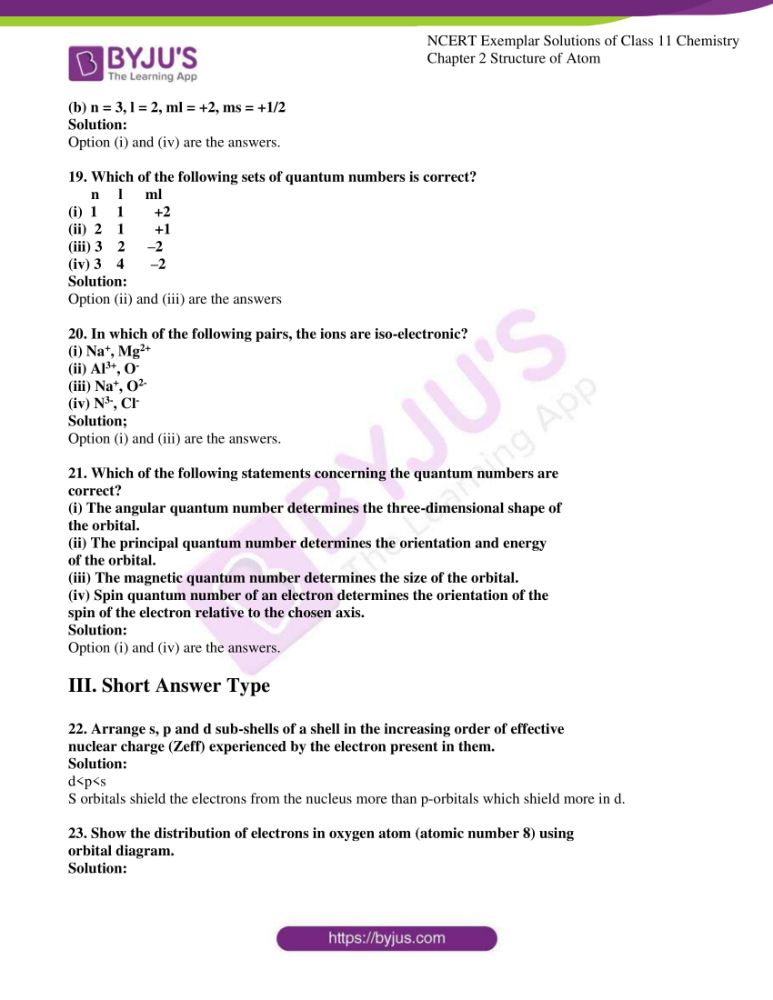 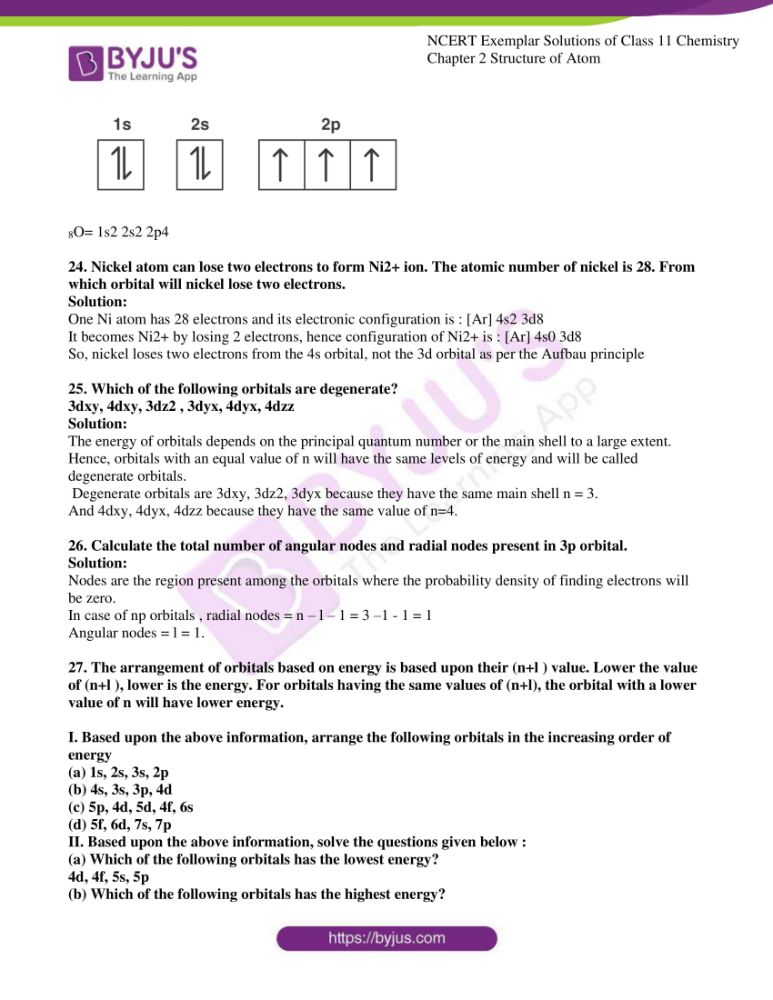 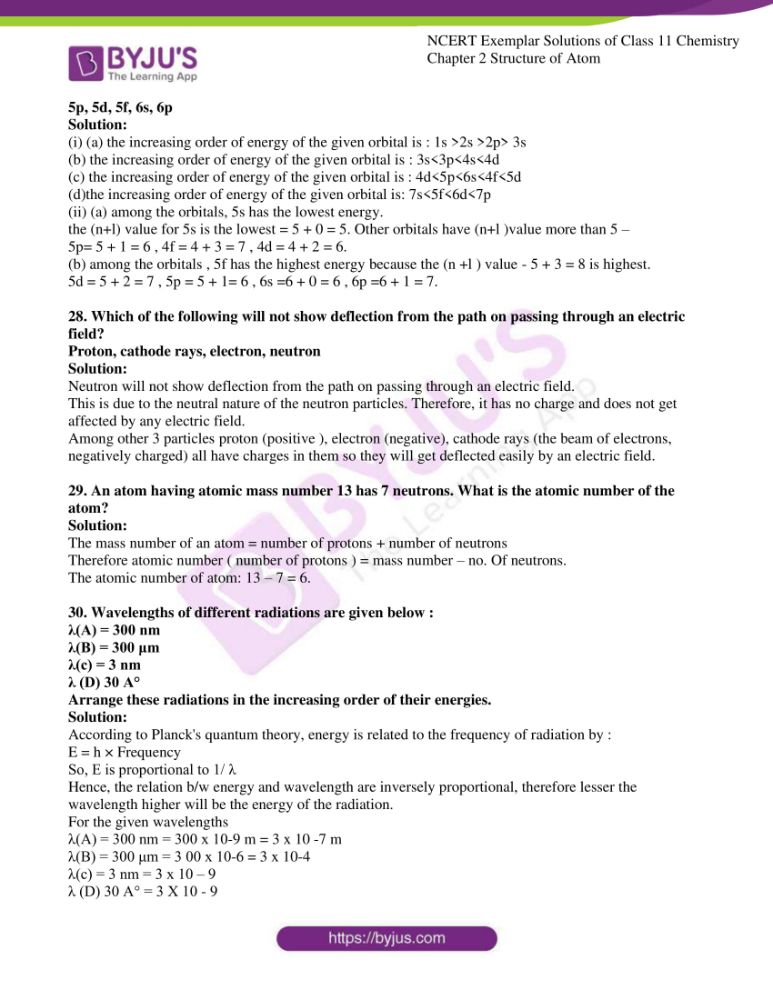 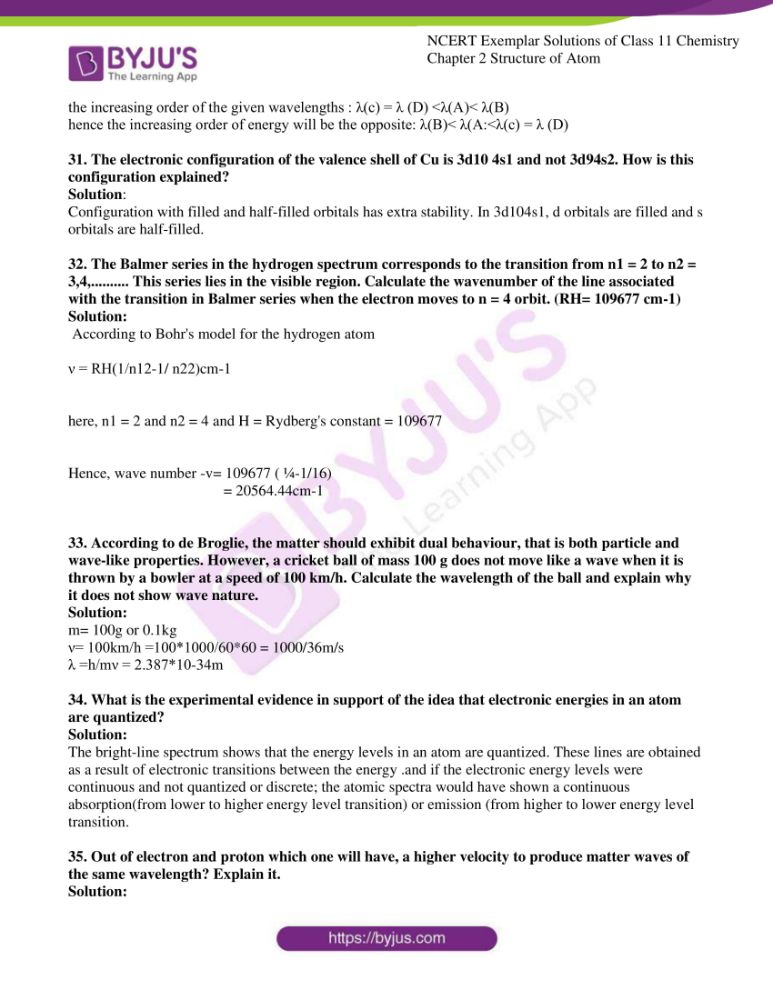 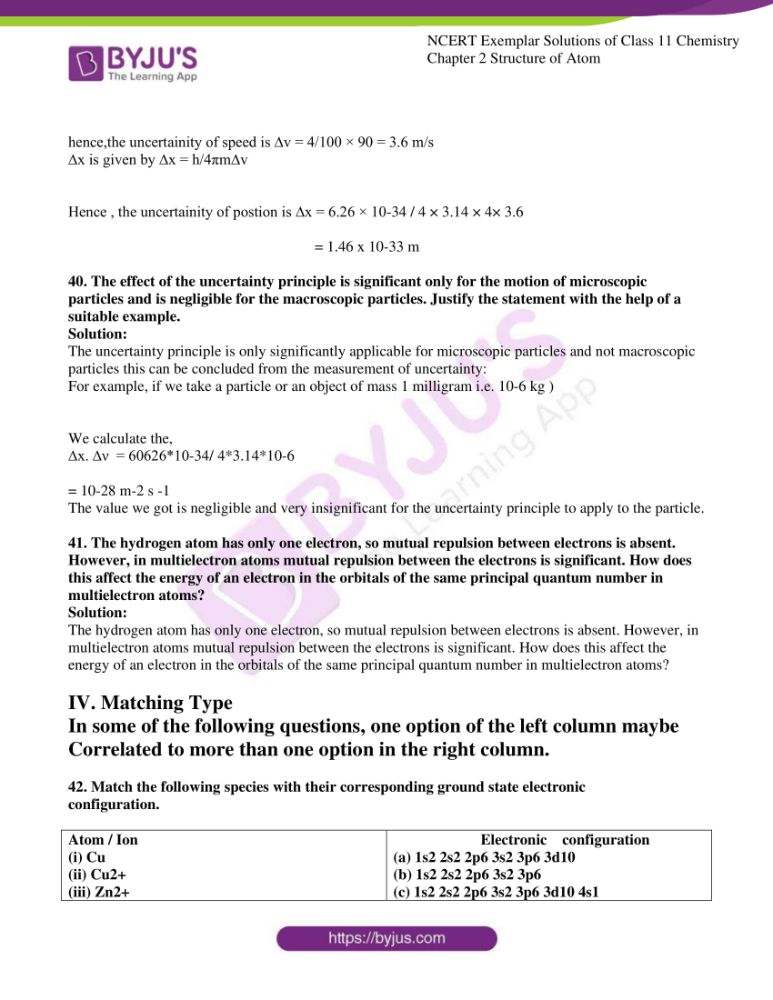 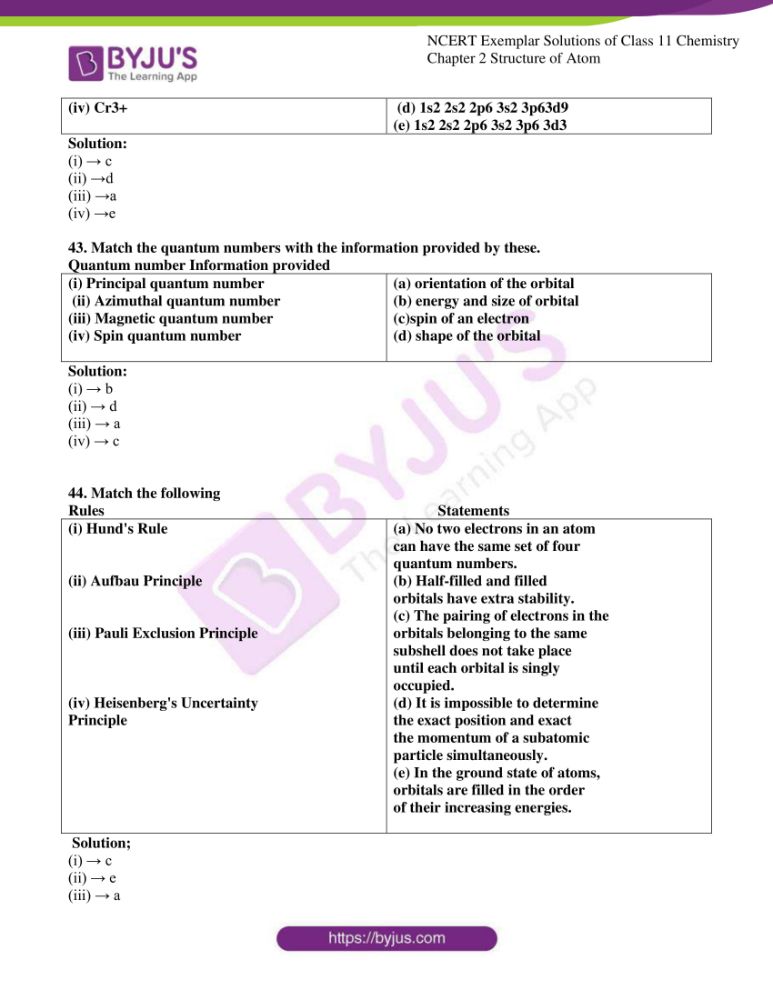 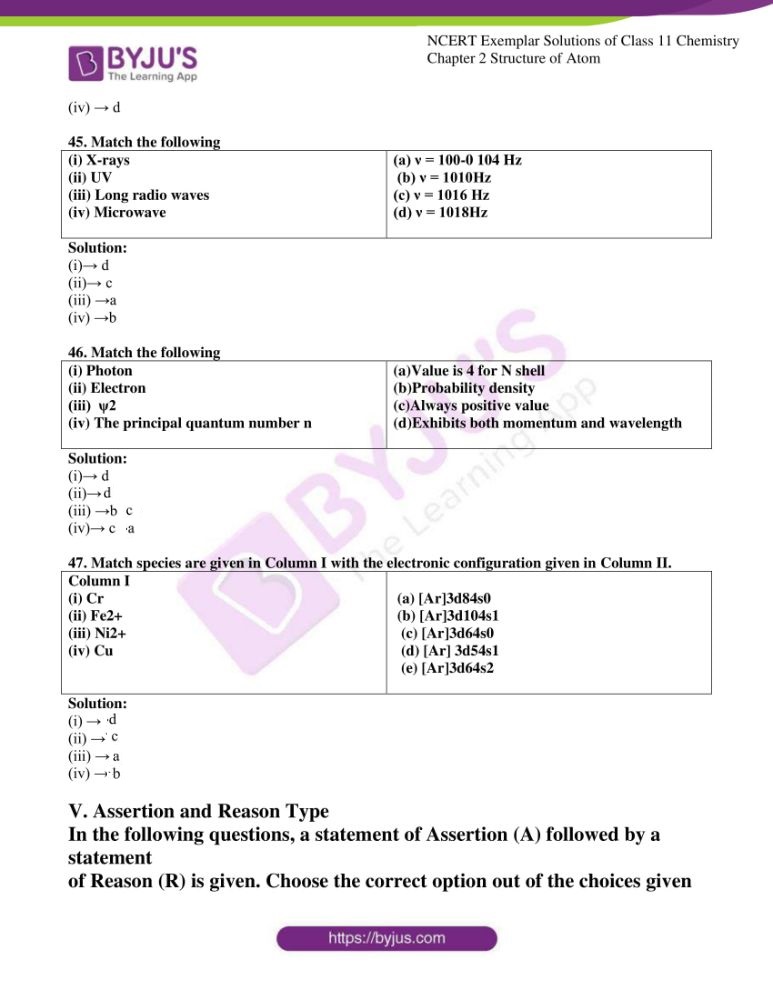 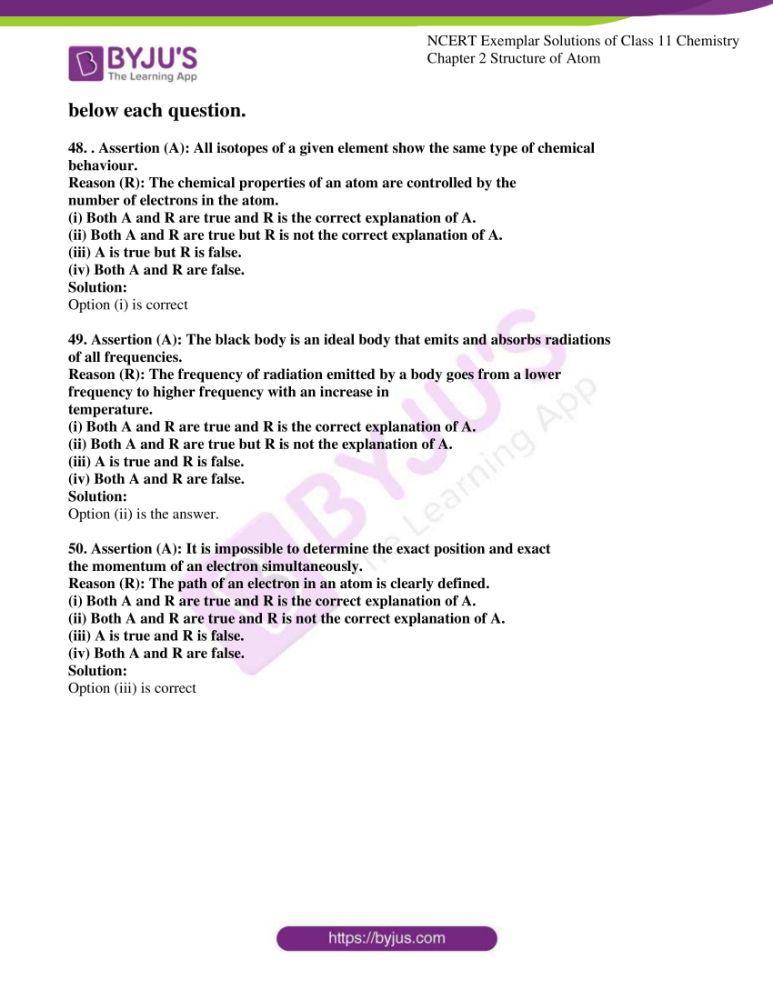 1. Which of the following conclusions could not be derived from Rutherford’s

(i) Most of the space in the atom is empty.

2. Which of the following options does not represent ground state electronic

configuration of an atom?

3. The probability density plots of 1s and 2s orbitals are given in Fig. 2.1:

electrons in the region.

Based on the above diagram which of the following statements is incorrect?

(i) 1s and 2s orbitals are spherical.

(ii) The probability of finding the electron is maximum near the nucleus.

as the distance from the nucleus increases.

4. Which of the following statement is not correct about the characteristics of

(i) They start from the cathode and move towards the anode.

electrodes in a cathode ray tube.

in the cathode ray tube.

5. Which of the following statements about the electron is incorrect?

(i) It is a negatively charged particle.

(iii) It is a basic constituent of all atoms.

(iv) It is a constituent of cathode rays.

6. Which of the following properties of an atom could be explained correctly by

Thomson Model of an atom?

(i) Overall neutrality of atom.

(ii) Spectra of a hydrogen atom.

(iii) Position of electrons, protons and neutrons in an atom.

7. Two atoms are said to be isobars if.

(i) they have the same atomic number but a different mass number.

(ii) they have the same number of electrons but a different number of neutrons.

(iii) they have the same number of neutrons but a different number of electrons.

10. Which of the following is responsible to rule out the existence of definite paths

or trajectories of electrons?

13. Chlorine exists in two isotopic forms, Cl-37 and Cl-35 but its atomic mass is

15. For the electrons of an oxygen atom, which of the following statements is correct?

16. If travelling at the same speeds, which of the following matter waves have the

17. Identify the pairs which are not of isotopes?

19. Which of the following sets of quantum numbers is correct?

Option (ii) and (iii) are the answers

20. In which of the following pairs, the ions are iso-electronic?

21. Which of the following statements concerning the quantum numbers are

(i) The angular quantum number determines the three-dimensional shape of

(ii) The principal quantum number determines the orientation and energy

(iii) The magnetic quantum number determines the size of the orbital.

spin of the electron relative to the chosen axis.

22. Arrange s, p and d sub-shells of a shell in the increasing order of effective

nuclear charge (Zeff) experienced by the electron present in them.

S orbitals shield the electrons from the nucleus more than p-orbitals which shield more in d.

One Ni atom has 28 electrons and its electronic configuration is : [Ar] 4s2 3d8

So, nickel loses two electrons from the 4s orbital, not the 3d orbital as per the Aufbau principle

25. Which of the following orbitals are degenerate?

The energy of orbitals depends on the principal quantum number or the main shell to a large extent. Hence, orbitals with an equal value of n will have the same levels of energy and will be called degenerate orbitals.

Degenerate orbitals are 3dxy, 3dz2, 3dyx because they have the same main shell n = 3.

Nodes are the region present among the orbitals where the probability density of finding electrons will be zero.

27. The arrangement of orbitals based on energy is based upon their (n+l ) value. Lower the value of (n+l ), lower is the energy. For orbitals having the same values of (n+l), the orbital with a lower value of n will have lower energy.

I. Based upon the above information, arrange the following orbitals in the increasing order of energy

II. Based upon the above information, solve the questions given below :

(a) Which of the following orbitals has the lowest energy?

(b) Which of the following orbitals has the highest energy?

(d)the increasing order of energy of the given orbital is: 7s<5f<6d<7p

(ii) (a) among the orbitals, 5s has the lowest energy.

28. Which of the following will not show deflection from the path on passing through an electric field?

Neutron will not show deflection from the path on passing through an electric field.

This is due to the neutral nature of the neutron particles. Therefore, it has no charge and does not get affected by any electric field.

Among other 3 particles proton (positive ), electron (negative), cathode rays (the beam of electrons, negatively charged) all have charges in them so they will get deflected easily by an electric field.

29. An atom having atomic mass number 13 has 7 neutrons. What is the atomic number of the atom?

30. Wavelengths of different radiations are given below :

Arrange these radiations in the increasing order of their energies.

According to Planck’s quantum theory, energy is related to the frequency of radiation by :

Hence, the relation b/w energy and wavelength are inversely proportional, therefore lesser the wavelength higher will be the energy of the radiation.

For the given wavelengths

According to Bohr’s model for the hydrogen atom

33. According to de Broglie, the matter should exhibit dual behaviour, that is both particle and wave-like properties. However, a cricket ball of mass 100 g does not move like a wave when it is thrown by a bowler at a speed of 100 km/h. Calculate the wavelength of the ball and explain why it does not show wave nature.

34. What is the experimental evidence in support of the idea that electronic energies in an atom are quantized?

35. Out of electron and proton which one will have, a higher velocity to produce matter waves of the same wavelength? Explain it.

Out of electron and proton, being the lighter particle electron will have a higher velocity and will also produce matter waves of the same wavelength.

36. A hypothetical electromagnetic wave is shown in Fig. 2.2. Find out the wavelength of the radiation.

The wavelength can be defined as the distance between two alike successive points in a wave (usually b/w two maxima s i.e. peaks or two minima s i.e. troughs are shown in the fig.)

37. Chlorophyll present in green leaves of plants absorbs light at 4.620 × 1014 Hz. Calculate the wavelength of radiation in nanometer. Which part of the electromagnetic spectrum does it belong to?

Relation b/w wavelength and frequency can be expressed as :

λ = c/ν, where c be the velocity of light and ν is the frequency of the radiation.

38. What is the difference between the terms orbit and orbital?

39. Table-tennis ball has a mass 10 g and a speed of 90 m/s. If speed can be measured within an accuracy of 4% what will be the uncertainty in speed and position?

According to Heisenberg’s uncertainty principle :

“It is fundamentally impossible to determine accurately both the velocity and the position of a particle at the same time.

From the given problem,

The value we got is negligible and very insignificant for the uncertainty principle to apply to the particle.

In some of the following questions, one option of the left column maybe

Correlated to more than one option in the right column.

42. Match the following species with their corresponding ground state electronic

43. Match the quantum numbers with the information provided by these.

Reason (R) is given. Choose the correct option out of the choices given

48. . Assertion (A): All isotopes of a given element show the same type of chemical

Reason (R): The chemical properties of an atom are controlled by the

number of electrons in the atom.

(ii) Both A and R are true but R is not the correct explanation of A.

Option (i) is correct

49. Assertion (A): The black body is an ideal body that emits and absorbs radiations

Reason (R): The frequency of radiation emitted by a body goes from a lower

frequency to higher frequency with an increase in

(ii) Both A and R are true but R is not the explanation of A.

50. Assertion (A): It is impossible to determine the exact position and exact

the momentum of an electron simultaneously.

Reason (R): The path of an electron in an atom is clearly defined.

(ii) Both A and R are true and R is not the correct explanation of A.

The structure of an atom is very important from the point of your future studies. It is one of the basic chapters that students need to learn to lay a good foundation for their future endeavours. In order to help students learn the structure of atoms thoroughly, BYJU’S brings you notes, exemplars, NCERT solutions, worksheets, notes, question papers, sample papers, books, tips, and tricks.

To get access to all the resources provided by us, register with the BYJU’S website, or download the BYJU’S learning app for a comprehensive learning opportunity.