NCERT solutions for Class 5 has a wide range of topics which is classified into 22 chapters. This article contains brief information about the topic – Super Senses. The environment is an important aspect to be considered these days. That is the reason why NCERT has published textbooks for the subject Environmental Studies, to create a sense of awareness among the young generation. Students can refer to NCERT Solutions from the links given below. 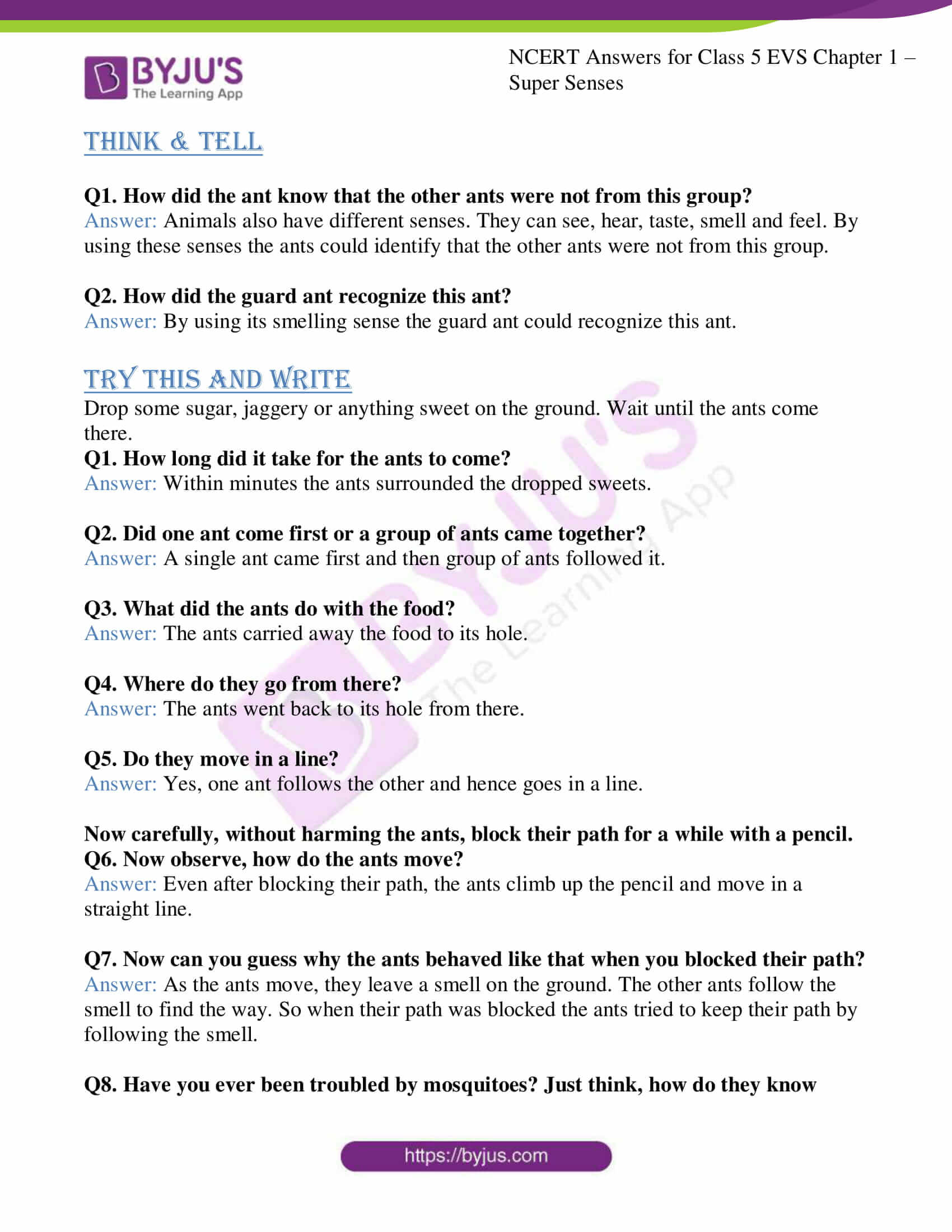 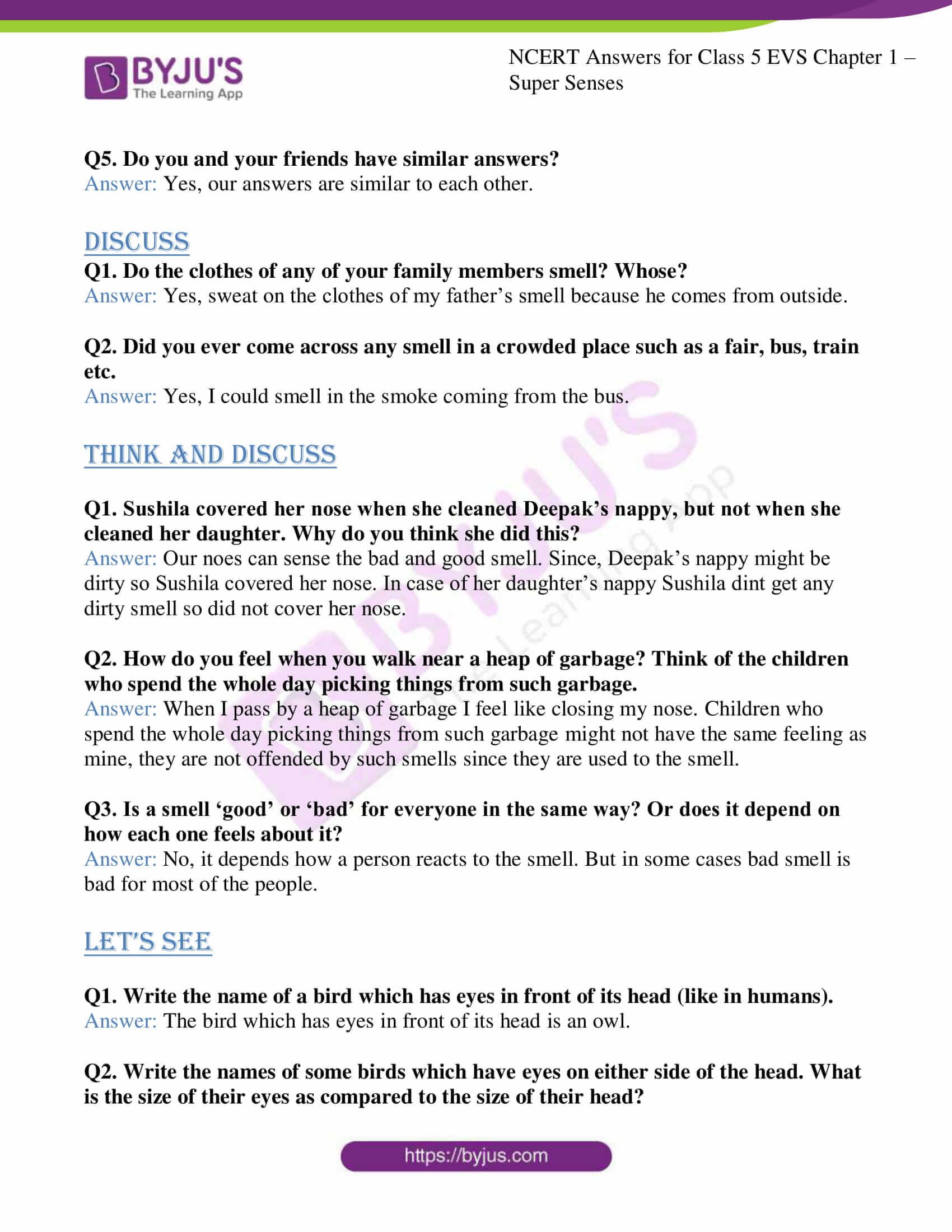 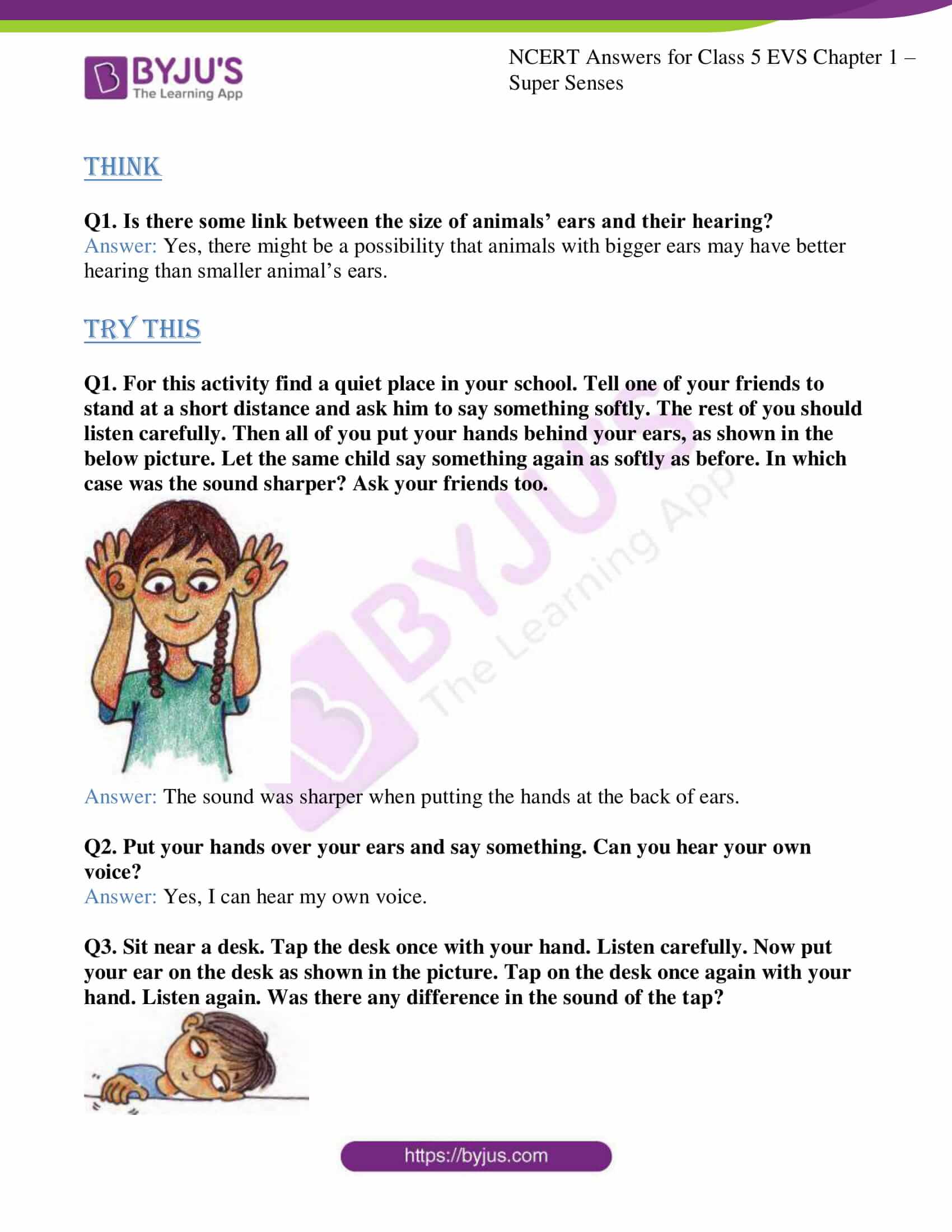 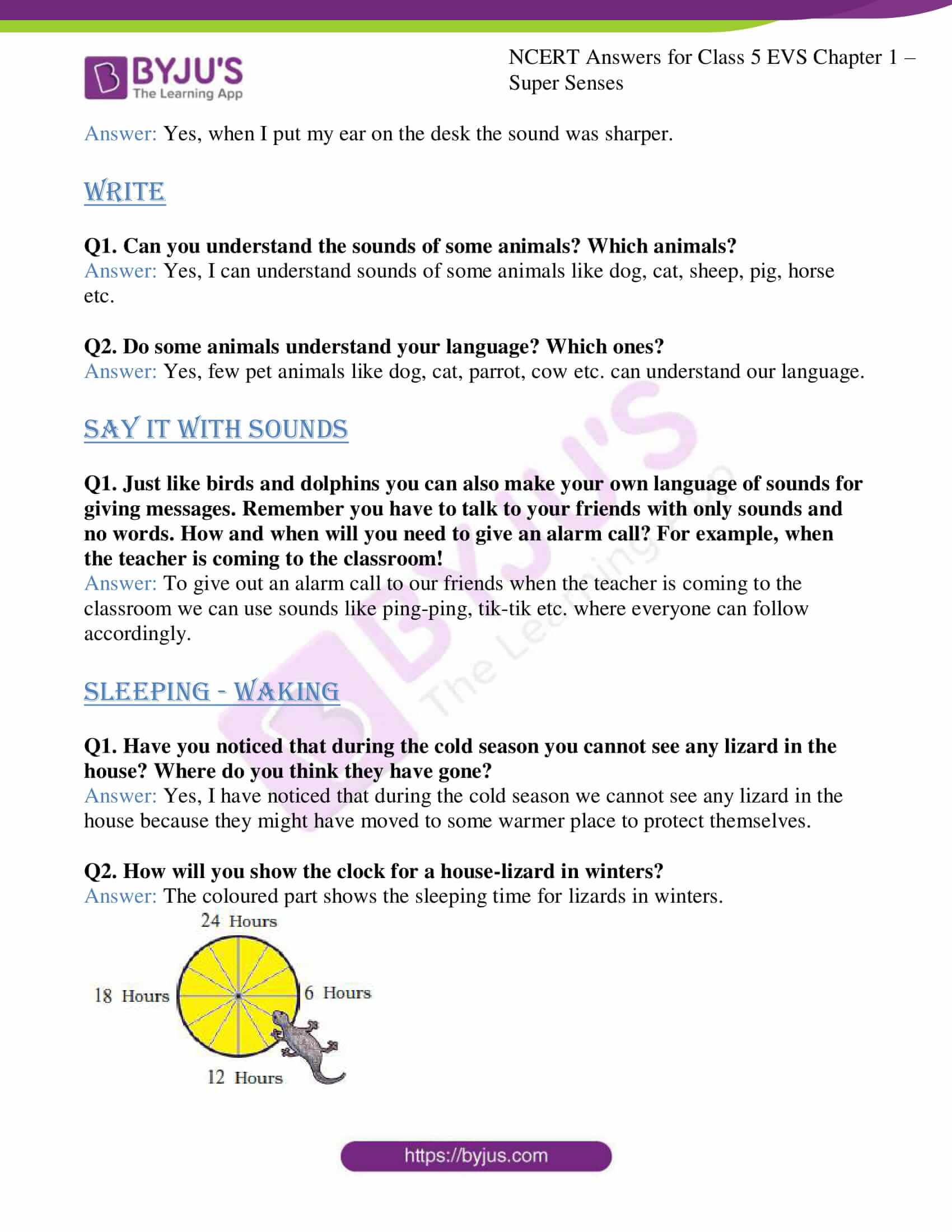 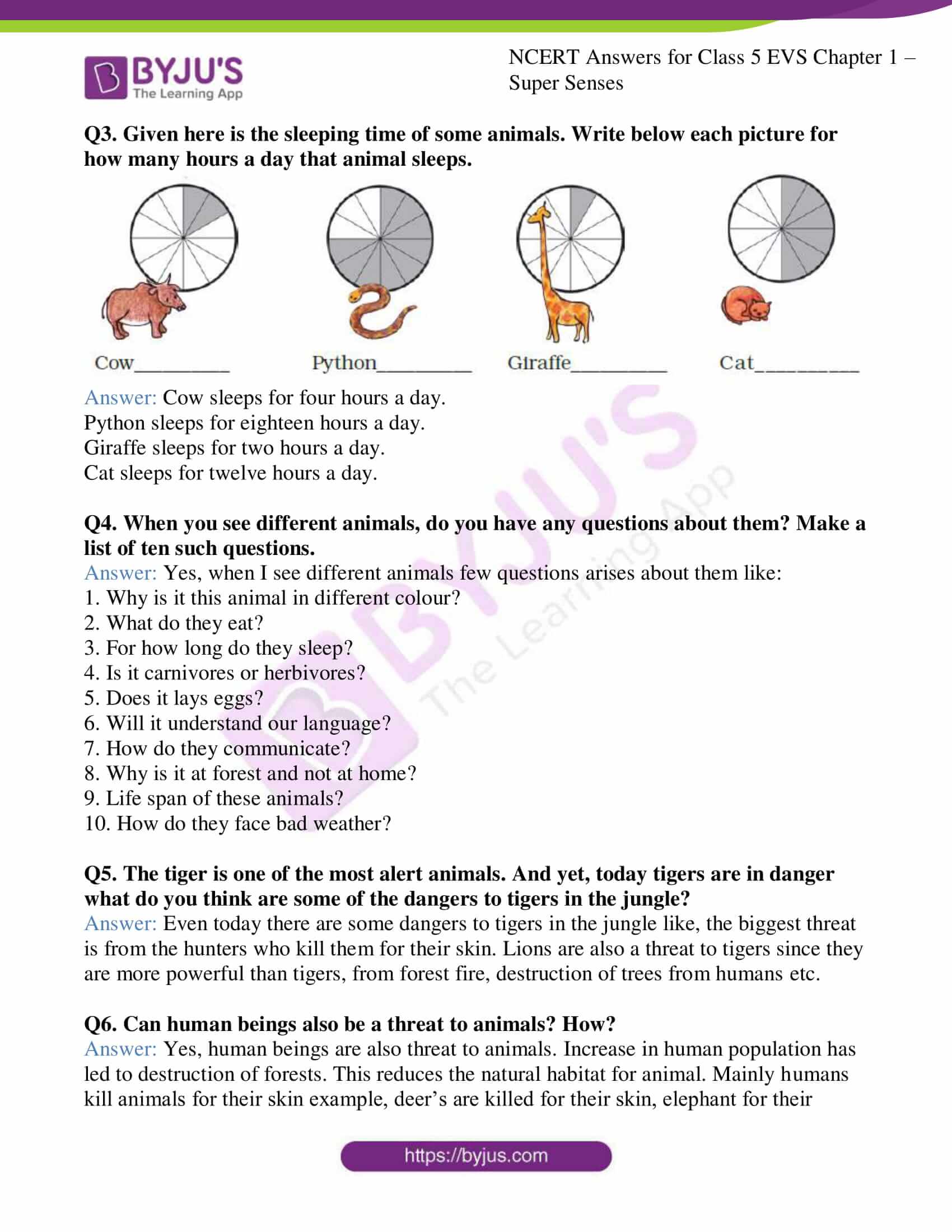 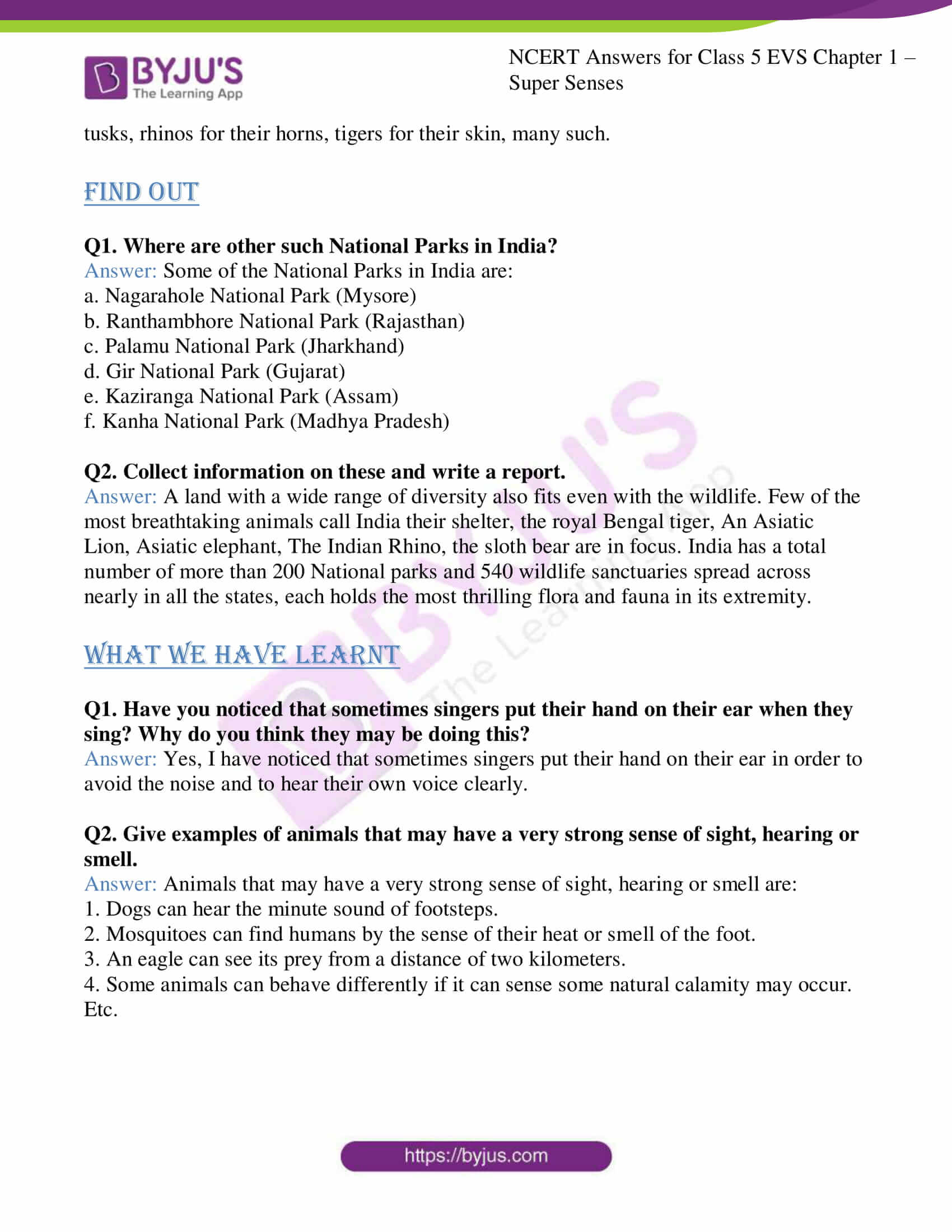 Q1. How did the ant know that the other ants were not from this group?

Answer: Animals also have different senses. They can see, hear, taste, smell and feel. By using these senses, the ants could identify that the other ants were not from this group.

Q2. How did the guard ant recognize this ant?

Answer: By using its smelling sense, the guard ant could recognize this ant.

Try this and write

Drop some sugar, jaggery or anything sweet on the ground. Wait until the ants come there.

Q1. How long did it take for the ants to come?

Answer: Within minutes, the ants surrounded the dropped sweets.

Q2. Did one ant come first or a group of ants came together?

Answer: A single ant came first, and then a group of ants followed it.

Q3. What did the ants do with the food?

Answer: The ants carried away the food to its hole.

Q4. Where do they go from there?

Answer: The ants went back to their hole from there.

Answer: Yes, one ant follows the other and hence goes in a line.

Now carefully, without harming the ants, block their path for a while with a pencil.

Q6. Now observe, how do the ants move?

Answer: Even after blocking their path, the ants climb up the pencil and move in a straight line.

Q7. Now can you guess why the ants behaved like that when you blocked their path?

Answer: As the ants move, they leave a smell on the ground. The other ants follow the smell to find the way. So when their path was blocked, the ants tried to keep their path by following the smell.

Q8. Have you ever been troubled by mosquitoes? Just think, how do they know where you are?

Answer: Mosquitoes can sense the smell of a human body. They also find us by the smell of the sole of our feet and the heat of our body.

Q9. Have you seen a dog sniffing here and there? What do you think it is trying to smell?

Answer: Yes, we have seen a dog sniffing here and there. The dog is trying to find out if any other dog is nearby by using its smelling senses.

Q1. In what ways do human beings make use of this special sense of smell of dogs?

Answer: Human beings make use of this special sense of smell of dogs to catch criminals, in search of explosives, recovery of stolen goods, etc.

Q2. When do you find your sense of smell helpful to you? List some examples. Like – to know by its smell that food has gone bad or that something is burning.

Answer: Other than smelling bad or burnt object, we can also sense the smell of perfume, fragrance of a flower, smell of sweat, soaps and detergents, etc.

Q3. Name the animals that you would be able to recognize only by their smell, without seeing them.

Answer: We can recognize animals like sheep, goats, cows, dogs, cats, etc., by their smell.

Q5. Do you and your friends have similar answers?

Answer: Yes, our answers are similar to each other.

Q1. Do the clothes of any of your family members smell? Whose?

Answer: Yes, sweat on my father’s clothes smell because he comes from outside.

Q2. Did you ever come across any smell in a crowded place such as a fair, bus, train, etc.

Answer: Yes, I could smell the smoke coming from the bus.

Answer: Our nose can sense the bad and good smell. Since Deepak’s nappy might be dirty, Sushila covered her nose. In the case of her daughter’s nappy, Sushila didn’t get any dirty smell so did not cover her nose.

Q2. How do you feel when you walk near a heap of garbage? Think of the children who spend the whole day picking things from such garbage.

Answer: When I pass by a heap of garbage, I feel like closing my nose. Children who spend the whole day picking things from such garbage might not have the same feeling as mine, they are not offended by such smells since they are used to the smell.

Q3. Is a smell ‘good’ or ‘bad’ for everyone in the same way? Or does it depend on how each one feels about it?

Answer: No, it depends on how a person reacts to the smell. But in some cases, the bad smell is bad for most people.

Q1. Write the name of a bird which has eyes in front of its head (like in humans).

Answer: The bird with eyes in front of its head is an owl.

Looking with one or both eyes

Q1. Could you see your friend’s action, without moving your neck?

Answer: I could not see my friend’s action without moving my neck.

Q2. Now try to look at your friend’s action with both your eyes open but without moving your neck.

Answer: Yes, I could see my friend’s action now.

Q3. What was the difference in looking with one or both eyes?

Answer: Looking at things with both the eyes is better than looking with one eye open.

Answer: With both eyes open, it is easier to catch the coin when tossed.

Q5. Imagine how it would be to have your eyes in place of your ears? What would you be able to do then, which you cannot do now?

Answer: If our eyes were in place of ears, then we could see things towards left or right, not straight.

Q6. Now can you guess from what distance can an eagle in the sky can see a roti on the ground?

Answer: An eagle has a very powerful sight. It can see a roti on the ground from a distance of two kilometres.

Q1. The names of ten animals whose ears can be seen.

Q2. The names of some animals whose ears are bigger than our ears.

Answer: Animals whose ears are bigger than our ears are giraffe, cow, zebra, elephant, buffalo etc.

Q1. Is there some link between the size of animals’ ears and their hearing?

Answer: Yes, there might be a possibility that animals with bigger ears may have better hearing than a smaller animal’s ears.

Q1. For this activity find a quiet place in your school. Tell one of your friends to stand at a short distance and ask him to say something softly. The rest of you should listen carefully. Then all of you put your hands behind your ears, as shown in the below picture. Let the same child say something again as softly as before. In which case was the sound sharper? Ask your friends too. Answer: The sound was sharper when putting the hands at the back of ears.

Q2. Put your hands over your ears and say something. Can you hear your own voice?

Answer: Yes, I can hear my own voice.

Answer: Yes, when I put my ear on the desk, the sound was sharper.

Q1. Can you understand the sounds of some animals? Which animals?

Answer: Yes, I can understand the sounds of some animals like dogs, cats, sheep, pigs, horses, etc.

Q2. Do some animals understand your language? Which ones?

Say it with sounds

Q1. Just like birds and dolphins you can also make your own language of sounds for giving messages. Remember you have to talk to your friends with only sounds and no words. How and when will you need to give an alarm call? For example, when the teacher is coming to the classroom!

Answer: To give out an alarm call to our friends when the teacher is coming to the classroom, we can use sounds like ping-ping, tik-tik, etc., where everyone can follow accordingly.

Q1. Have you noticed that during the cold season you cannot see any lizard in the house? Where do you think they have gone?

Answer: Yes, I have noticed that during the cold season, we cannot see any lizards in the house because they might have moved to some warmer place to protect themselves.

Q2. How will you show the clock for a house-lizard in winters?

Answer: The coloured part shows the sleeping time for lizards in winters. 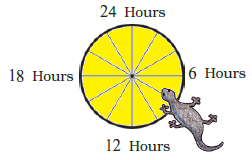 Q3. Given here is the sleeping time of some animals. Write below each picture for how many hours a day that animal sleeps.

Q4. When you see different animals, do you have any questions about them? Make a list of ten such questions.

Answer: Yes, when I see different animals, a few questions arise about them like:

1. Why is this animal in different colour?

3. For how long do they sleep?

4. Is it carnivores or herbivores?

6. Will it understand our language?

7. How do they communicate?

9. What is the lifespan of these animals?

Q5. The tiger is one of the most alert animals. And yet, today tigers are in danger. What do you think are some of the dangers to tigers in the jungle?

Answer: Even today, there are some dangers to tigers in the jungle. The biggest threat is from the hunters who kill them for their skin. Lions are also a threat to tigers since they are more powerful than tigers. They also face dangers from forest fires, destruction of trees, humans, etc.

Q6. Can human beings also be a threat to animals? How?

Q1. Where are other such National Parks in India?

Answer: Some of the National Parks in India are:

Q2. Collect information on these and write a report.

Answer: A land with a wide range of diversity benefits diverse wildlife. A few of the most breathtaking animals call India their shelter. The royal Bengal tiger, the Asiatic Lion, the Asian elephant, the Indian Rhino, and the sloth bear are examples. India has a total number of more than 200 National parks and 540 wildlife sanctuaries spread across nearly all the states, each holds a variety of flora and fauna.

Q1. Have you noticed that sometimes singers put their hand on their ear when they sing? Why do you think they may be doing this?

Answer: Yes, I have noticed that sometimes singers put their hand on their ear in order to avoid the outside noise and to hear their own voice clearly.

Q2. Give examples of animals that may have a very strong sense of sight, hearing or smell.

Answer: Animals that may have a very strong sense of sight, hearing or smell are:

1. Dogs can hear the minute sound of footsteps.

2. Mosquitoes can find humans by the sense of their heat or smell of the foot.

3. An eagle can see its prey from a distance of two kilometers.

4. Some animals can behave differently if they sense some natural calamity may occur.

The NCERT Solutions for Chapter 1 – Super Senses help students determine the functions of the different sense organs of the human body. This was a short summary of Class 5 EVS Chapter 1 NCERT solutions. To learn more about other chapters, refer to the solutions given below.