NCERT Class 5 EVS Chapter 7 explains to children the various properties of water. It guides students in identifying the objects that float and sink in the water and the objects that are soluble and insoluble in water. The differences and similarities between different kinds of liquids like water, oil, milk, cold drinks, etc., are taught in this chapter. The chapter also covers the process of evaporation.

The Class 5 EVS, Chapter 7 Experiments with Water contains questions such as the following:

Would the cap of plastic bottle cap sink or float on water?

At your house, what things are made by drying in the sun?

These are a few questions from the EVS, Class 5, Chapter 7. If you wish to know more, view the NCERT Solutions below. 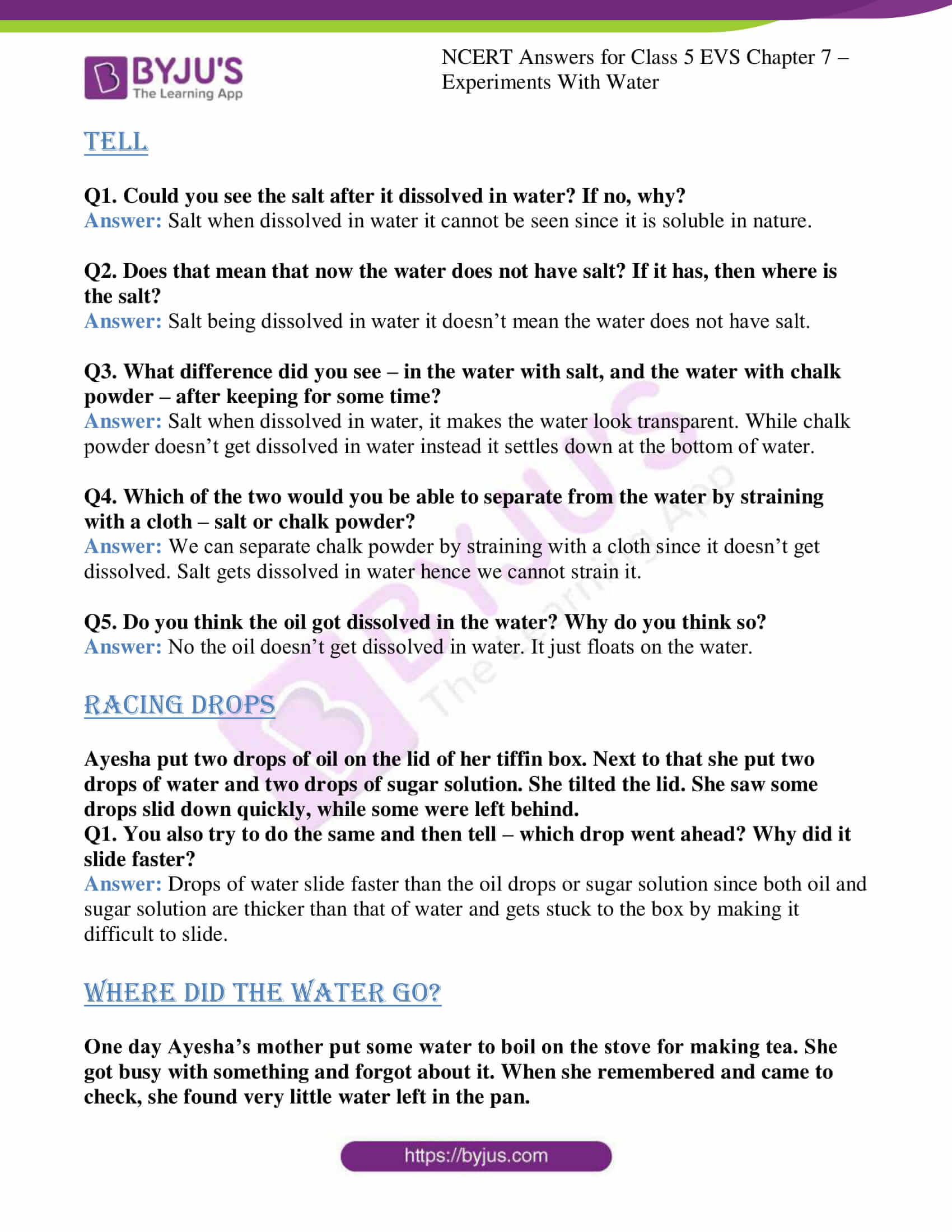 Think what would happen if

Q1. Ayesha put a puffed puri in a bowl of water. Would it sink or float?

Answer: When puffed puri is put in a bowl of water, it floats.

Q2. You put a steel plate on water. Would it sink or float? What would happen to a spoon?

Answer: If you place a steel plate on the water carefully, it will float. When you put the spoon in the water, it sinks.

Q3. Would the cap of a plastic bottle sink or float on water?

Answer: The cap of a plastic bottle floats when put in the water since it is plastic.

Q4. Have you seen that some things float on water while others sink? Think how this happens!

Answer: It is observed that a few things float and a few sink in the water. If the item put in the water is lighter, it floats. If it is heavier, it sinks. It depends upon the volume of the item.

Do this and find out

Do this experiment in groups of four friends. Each group will need a big pot filled with water and the things listed in the table. Put each thing one-by-one in water and observe. Write your observations in the table given below:

Q2. Find out from the other groups which things floated and which sank in the water?

Q3. After doing the experiment, fill in the blanks.

Q1. Take some water in a glass. Put a lemon in it. Now keep putting salt in the water, half a spoon at a time. Were you able to float your lemon in water?

Answer: Yes the lemon started to float on water.

Q2. What do you think, the lemon floated in salty water, because……

Answer: When we keep adding salt to the water, the water becomes thicker, and hence the lemon floats.

What dissolved, what did not?

Q1. Suggest some ways to Hamid for quickly dissolving sugar

Answer: For dissolving sugar quickly, Hamid can follow these methods:

Q1. Make groups of four friends. For the experiment you will need 4-5 glasses or bowls, spoons, water, and the things listed in the table. Take some water in each glass. Now try to dissolve one thing in one glass. Observe what happens and note in the table

Q1. Could you see the salt after it dissolved in water? If no, why?

Answer: Salt, when dissolved in water, cannot be seen since it is soluble in nature.

Q2. Does that mean that now the water does not have salt? If it has, then where is the salt?

Answer: Salt, when dissolved in water, makes the water look transparent. Chalk powder doesn’t dissolve in water; instead, it settles down at the bottom of water.

Q4. Which of the two would you be able to separate from the water by straining with a cloth – salt or chalk powder?

Answer: We can separate chalk powder by straining it with a cloth since it doesn’t get dissolved. Salt gets dissolved in water hence we cannot strain it.

Q5. Do you think the oil got dissolved in the water? Why do you think so?

Answer: No, the oil doesn’t get dissolved in water. It just floats on the water.

Q1. You also try to do the same and then tell – which drop went ahead? Why did it slide faster?

Answer: Drops of water slide faster than the oil drops or sugar solution since both oil and sugar solution are thicker than water and get stuck to the box making it difficult to slide.

Where did the water go?

One day Ayesha’s mother put some water to boil on the stove for making tea. She got busy with something and forgot about it. When she remembered and came to check, she found very little water left in the pan.

Q1. Think where did the water go?

Answer: The water evaporated, and hence less water remained in the pan.

Q2. Why did Chittibabu and Chinnababu keep their mango jelly in the sun?

Answer: Chittibabu and Chinnababu kept their mango jelly in the sun so that the water in it gets evaporated.

Q3. At your house, what things are made by drying in the sun?

Answer: At my home, they prepare papad, pickles, sabudana papad, and mango jelly by drying them in the sun.

Q1. You have washed your handkerchief and you want to dry it quickly. What all can you do?

Answer: To dry the washed handkerchief, firstly, we can squeeze and spread it out properly and leave it to dry in the sun. We can also use ironing to dry the kerchief.

Q2. What things do you put in water to make tea? Which of those things dissolves in water?

Answer: To prepare tea, we need to add sugar, tea powder, and milk to the water. Milk and sugar get dissolved in water while the tea powder settles down at the bottom later. By using a strainer, we can obtain tea.

Q3. You have been given some mishri pieces (lumps of sugar). Suggest some ways to dissolve them quickly.