NCERT Class 5 EVS Chapter 12 – What If It Finishes? helps students to understand the importance of natural resources especially fuels and why it has to be conserved. The chapter, as well as the solutions that we are providing here, has been designed to help students learn about different types of fuels and energy, and they will also make them aware of using natural resources especially petrol judiciously as they will not last forever. They will also learn about pollution and vehicles in general. In any case, these NCERT Solutions will further act as a great reference for students using which they can prepare well for exams. 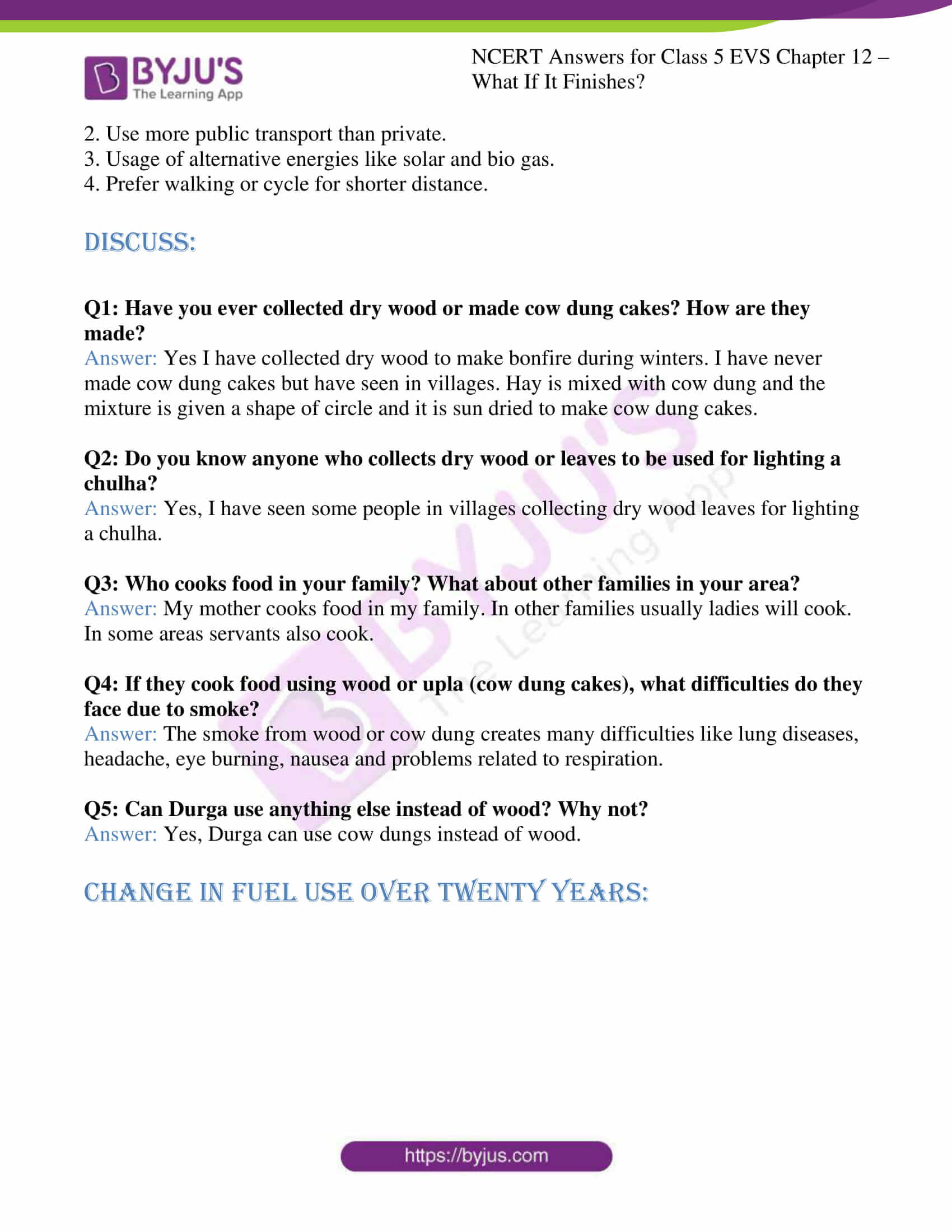 Look At the picture and write: 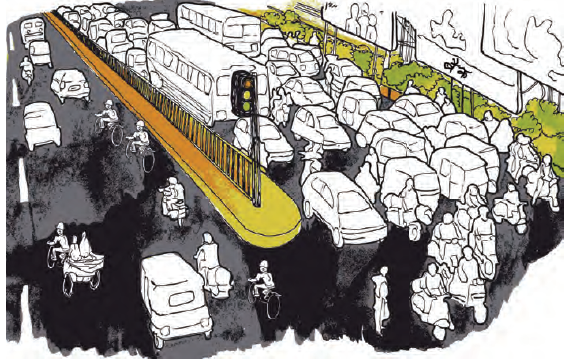 Q1: What are the different kinds of vehicles that you can see?

Q2: What do you think they need petrol and diesel as fuel?

Answer: Cycles does not need any fuel, but other vehicles shown here need petrol or diesel as their fuel.

Q3: Which of the vehicles do you think give off smoke? Put a red mark on those.

Answer: The vehicles such as car, bus, motor cycle and auto rickshaw. 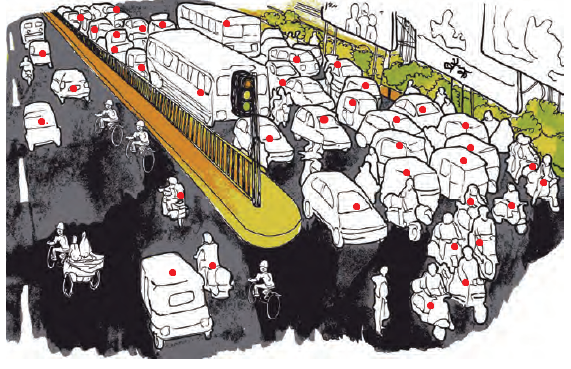 Q4: Which are the vehicles run without petrol and diesel?

Answer: Cycle can run without petrol and diesel.

Q5: What problems do we face from the speeding vehicles?

Answer: It may cause accidents.

Answer: Yes, I ride bicycle. I use bicycle for going to the market and playground.

Q2: How do you come to school?

Answer: I come to school by bus.

Q3: How do your family members go to work from home?

Q4: What problems can we have from smoke coming out of vehicles?

Q5: What kind of problems can we face from noise of vehicles (honking)?

Answer: Noise coming from vehicles cause headache and irritation.

Find out and discuss:

Q1: Which states of India have oil fields?

Q2: Besides oil, what else is found deep inside the earth?

Answer: Besides oil many minerals are found deep inside the earth such as coal, gold, iron, copper, diamond, potassium, magnesium and zinc.

Q1: What all can vehicles run on?

Q2: What kinds of problems will we face, if the number of vehicles keep on increasing? For example, more traffic on the road. Talk to your elders and write about it.

Answer: If the number of vehicles keep on increasing it would lead to many problems like, increased traffic on the road, air pollution, noise pollution and accidents.

Q3: Manju said, “Why doesn’t everyone use a bus?” What do you think, why don’t people travel by buses?

Answer: Buses are overcrowded and hence people want to avoid that.

Q4: Suggest some ways to deal with the problems arising out of the growing number of vehicles.

Answer: People should prefer public transport like bus, trains etc. and people should use car pool to avoid problems arising out of the growing number of vehicles.

Q5: What are the benefits, if we switch off the engine of the vehicles at the red light on the road?

Answer: It will save the fuels if we switch off the engine of the vehicles at the red light on the road.

Find OUT and Write:

Q1: What is the price of petrol and diesel in your area?

Q2: Why are the prices of petrol and diesel going up?

Answer: The prices of petrol and diesel is going up because of its production is limited while consumption is increasing day by day.

Q3: In one month how much petrol and diesel is used in your home? What is it used for?

Answer: Depends upon the distance we travel. It is used for vehicles.

See the poster and Write: 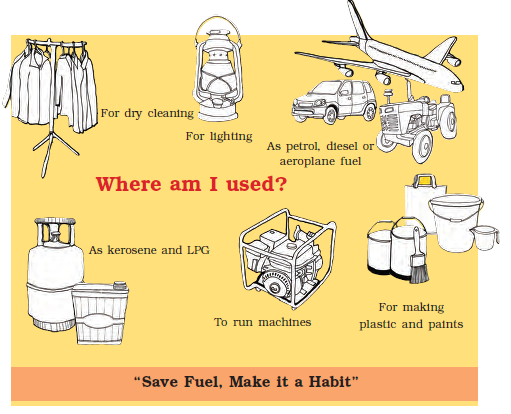 Answer: Oil used for dry cleaning, for lighting, as fuel for automobiles and airplanes, for making plastic and paints, to run machines and as kerosene and LPG.

Q2: Where is diesel used? Find out

Answer: Diesel is used for to run machines and as fuel for automobiles.

Q1: What would happen if you don’t get petrol or diesel for a week in your village or town?

Answer: If petrol and diesel will not be available for a week the life will become difficult for everyone to travel, to do work in industries.

Q2: Suggest some ways to save oil.

Answer: Some of the measures are listed below to save oil.

1. Switch off the engines at the red light on the road.

2. Use more public transport than private.

3. Usage of alternative energies like solar and bio gas.

Q1: Have you ever collected dry wood or made cow dung cakes? How are they made?

Answer: Yes I have collected dry wood to make bonfire during winters. I have never made cow dung cakes but have seen in villages. Hay is mixed with cow dung and the mixture is given a shape of circle and it is sun dried to make cow dung cakes.

Q2: Do you know anyone who collects dry wood or leaves to be used for lighting a chulha?

Answer: Yes, I have seen some people in villages collecting dry wood leaves for lighting a chulha.

Q3: Who cooks food in your family? What about other families in your area?

Answer: My mother cooks food in my family. In other families usually ladies will cook. In some areas servants also cook.

Q4: If they cook food using wood or upla (cow dung cakes), what difficulties do they face due to smoke?

Answer: The smoke from wood or cow dung creates many difficulties like lung diseases, headache, eye burning, nausea and problems related to respiration.

Q5: Can Durga use anything else instead of wood? Why not?

Answer: Yes, Durga can use cow dungs instead of wood.

Change in fuel use over twenty years:

Find out from your elders:

Q1: When they were young what was then used to cook food at home?

Answer: When they were young coal, wood and cow dung were used to cook food at home.

Q2: In the past 10 years use of which cooking fuel has increased in your area? Use of which fuel has decreased?

Answer: In past 10 years use of LPG and electricity has increased. Use of cow dung and wood has decreased.

Q3: Guess the use of which fuel would increase and which would decrease in the next 10 years.

Answer: In next 10 years use of LPG and electricity will increase. Use of cow dung and wood will decrease.