NCERT Solutions Class 5 EVS Chapter 17 covers the topic – Across the Wall. This chapter talks about how a girl breaks the gender wall set by her mother. The journey of Afsana made her become a strong wall of NBA Mumbai. At BYJU’S, you can download Class 5 Science notes, NCERT textbooks – NCERT Class 5 Science book, NCERT Solutions in PDFs, and also and other study materials. 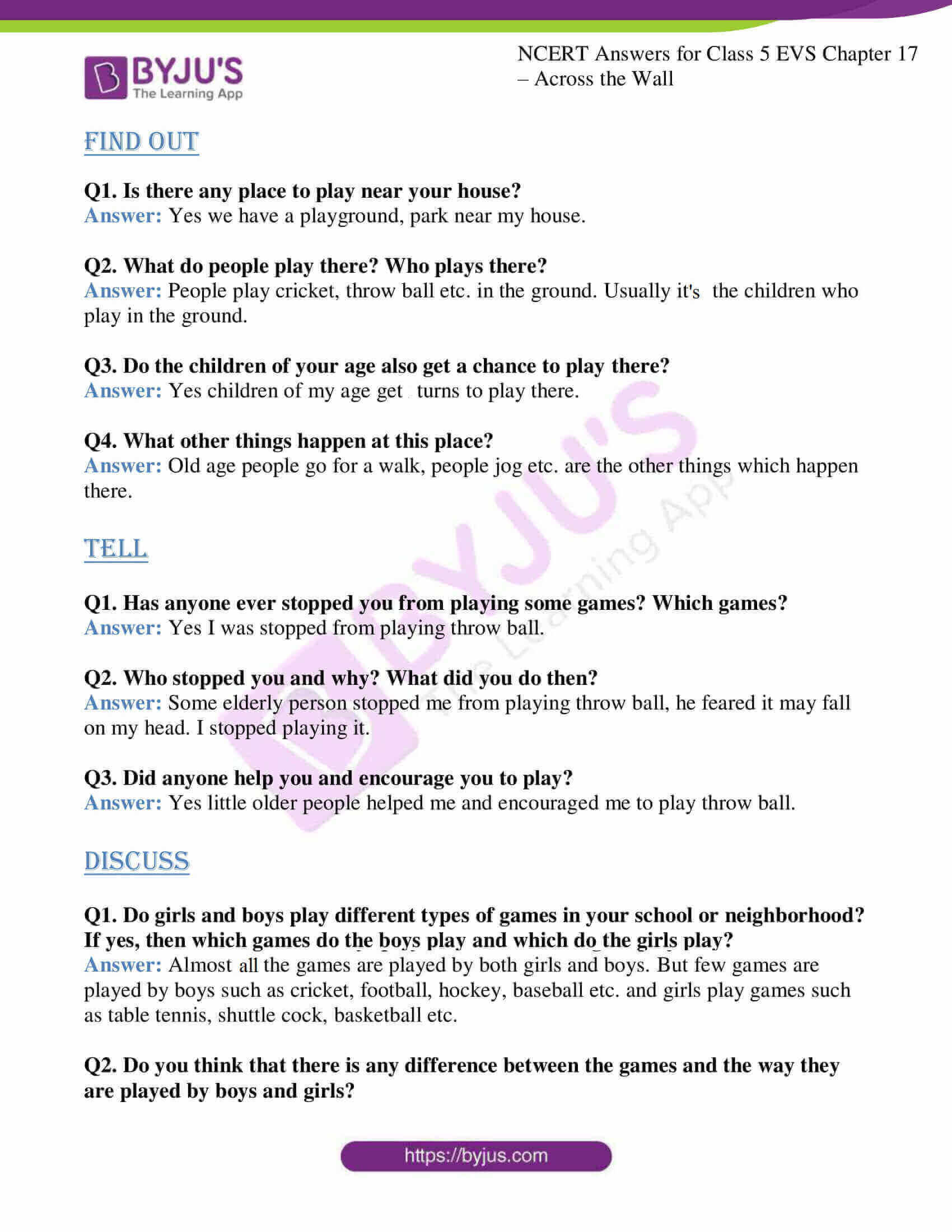 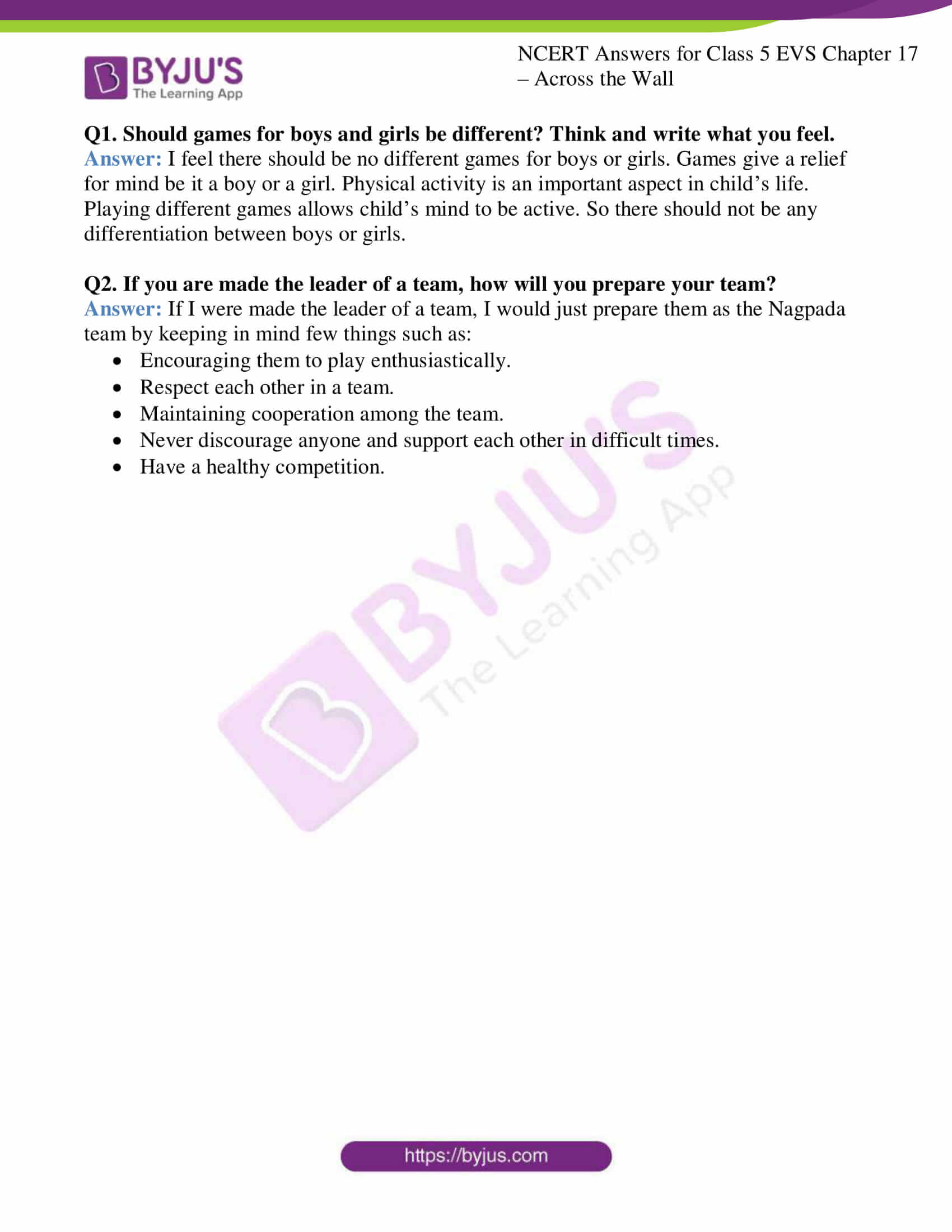 Q1. Is there any place to play near your house?

Answer: Yes, we have a playground and park near my house.

Q2. What do people play there? Who plays there?

Q3. Do the children of your age also get a chance to play there?

Answer: Yes, children of my age get turns to play there.

Q4. What other things happen at this place?

Q1. Has anyone ever stopped you from playing some games? Which games?

Answer: Yes, I was stopped from playing throw ball.

Q2. Who stopped you and why? What did you do then?

Answer: Some elderly person stopped me from playing throw ball, as he feared it might fall on my head. Then, I stopped playing it.

Q3. Did anyone help you and encourage you to play?

Q1. Do girls and boys play different types of games in your school or neighbourhood? If yes, then which games do the boys play, and which do the girls play?

Q2. Do you think that there is any difference between the games and the way they are played by boys and girls?

Answer: Yes, there is a difference between the way boys and girls play the game. Boys usually play very harshly, whereas girls prefer playing smoothly.

Q3. Should the games for boys and girls be different? What do you think?

Answer: I think there should not be any differentiation between girls and boys. Since both are treated equally, anyone can play the game they like.

Q1. Have you ever played as part of a team in your class, school or neighbourhood? Whom did you play with? What game did you play?

Answer: Yes, I have played for my school team. I played along with my classmates as well as the seniors. We played throw ball.

Q2. What is the difference between playing for yourself and for the team?

Answer: There’s a huge difference between playing for myself and for the team. When we play for ourselves, there is no competition, nor there is any fun. But when we play with a team of members, we enjoy a lot, we learn how to play, and there is healthy competition.

Q3. While playing in a team, would you like to play for yourself or for the team? Why?

Answer: While playing in a team, I would like to play for the team rather than for myself. When we play in a team, there will be a better understanding between the team members, and it will teach us unity is strength.

Q4. Is your team like the team Afsana played with at Sholapur or like the Nagpada team? How?

Answer: Our team is more like the Nagpada team. There is good understanding among our team members, good cooperation, good energy, and encouragement of each other while playing. Since there is good unity among team members, similarly, we would also try to be perfect and successful. Hence, we can say that our team is also the same as the Nagpada team.

Q1. Have you ever taken part in a game or competition from your school or area? How did you feel?

Answer: Yes, I have taken part in the game; I felt great when I took part in my school’s competition.

Q2. Did you go to some other place to play? What was that place like? How did you like going to that place?

Answer: Yes, we went to another school to play the game. The school looked nice, and I liked the school environment when I was there.

Q3. Have you seen matches being played between India and other countries? Which ones?

Answer: Yes, I have seen matches being played between India and other countries. I liked India and Australia cricket match.

Q4. We all know about the cricketers of India, and we all like them. Do people also know and like the Indian players who play some other games? (Yes or No). How do you feel about it? Do you know the players of the Indian football or kabaddi team?

Answer: Yes, the people know and like a few of the Indian players of other games. I feel happy that other games are becoming popular. No, I have no idea about Indian football or the kabaddi team.

Q1. What would happen if girls were not allowed to play games, study or do some other work of their choice?

Answer: If girls were not allowed to play games or study, or do any other work of their choice, then it would badly affect them mentally and physically. If freedom is not given, they cannot showcase their talent either.

Q2. How would you feel if you were not allowed to take part in some game or drama?

Answer: It would make me feel bad if I were not allowed to take part in some game or drama.

Q3. Have you heard of any women players? Name them and the games they play.

Answer: Yes, I have heard women players, as mentioned below:

Q4. In which areas, other than sports, have you heard of women getting recognition?

Answer: There are areas where women get recognition other than sports, such as the following:

Q5. Are these women less known than men? Why?

Answer: No these women are not less known than the men. These women have brought huge pride and respect to the country in their respective fields.

Q6. How would you find the world to be, if girls never got a chance to take part in games, drama or dance? How would you feel if such a thing happened to boys?

Answer: If girls never got a chance to take part in games, drama or dance then there would be no competitions or challenges among people and hence it would become uneven world. Similarly in case of boys when it is vice-versed.

Q7. Do you know of any woman or girl who you would want to be like when you grow up? (Think of names other than a film actor or a model)

Answer: Yes I would want to become like Sunita Williams (Astronaut) when I grow up.

Q1. The newspaper report said, “Afsana has jumped over the wall. The gender wall that her mother had put up for her.” Think and write in your own words, what was this wall? What do you understand by ‘gender bias’?

Answer: The word wall here refers to gender bias. Usually, in rural parts of India, there still there exists differentiation between the genders. Girls are usually not allowed to study, work or do anything of their choice, and boys are given more attention than girls. Here, Afsana’s mother is trying to tell Afsana to continue with the household work rather than to work outside. Firstly, this gender bias has to be removed from people’s minds, and equal rights have to be given to both girls and boys.

What we have learnt?

Q1. Should games for boys and girls be different? Think and write what you feel.

Q2. If you are made the leader of a team, how will you prepare your team?

Answer: If I were made the leader of a team, I would prepare them as the Nagpada team by keeping in mind a few things, such as:

At BYJU’S, the best teachers across the country educate students with inspiring stories, pictures, videos, etc. Revision tests and worksheets are given to solve and assess their improvement in studies after the completion of each chapter. Below is a sample of NCERT Class 5 EVS worksheets from Chapter 17:

Where do you like to play the most? (Park, Playground, House)

Is there any park nearby? (Yes, No)

Q2. Do you play in a team or only individual games?

Q3. If you are playing in a team, will you support the team?