NCERT Solutions Class 5 EVS Chapter 11 is a very interesting chapter in the syllabus. It talks about a girl named Sunita and her adventures in space, this chapter brings along a series of questions regarding how things happen on earth when looked at from space. Students can refer to and download the NCERT Solutions from the links given below. 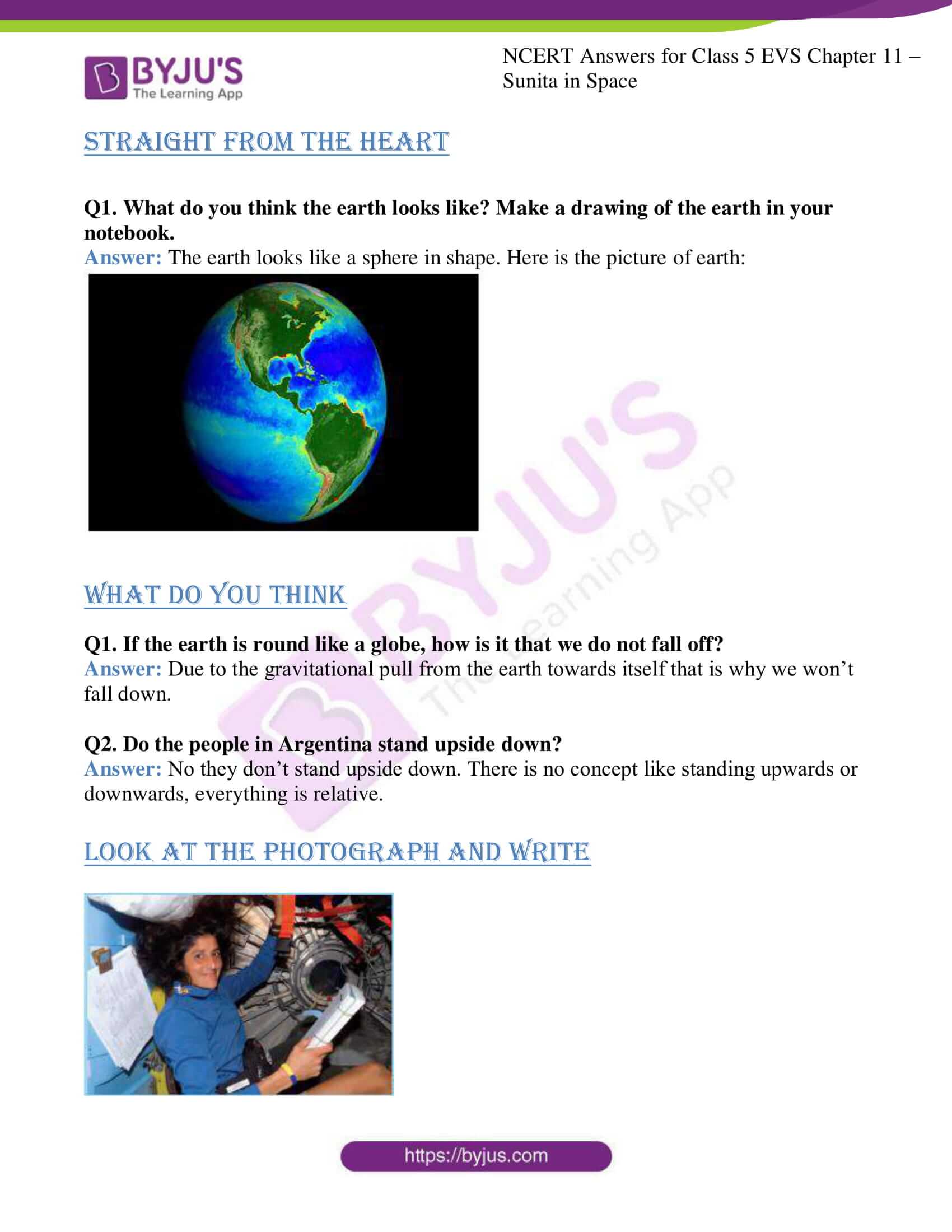 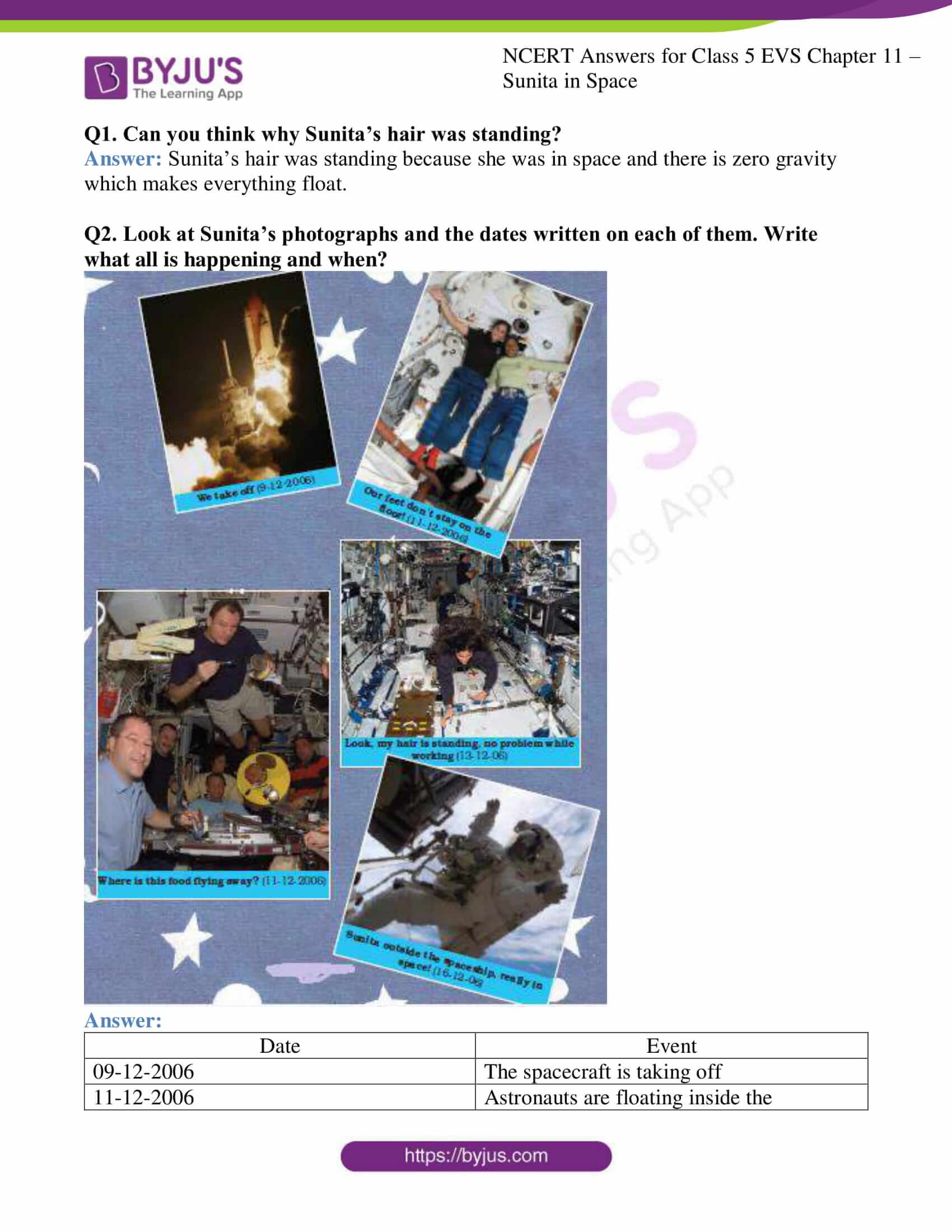 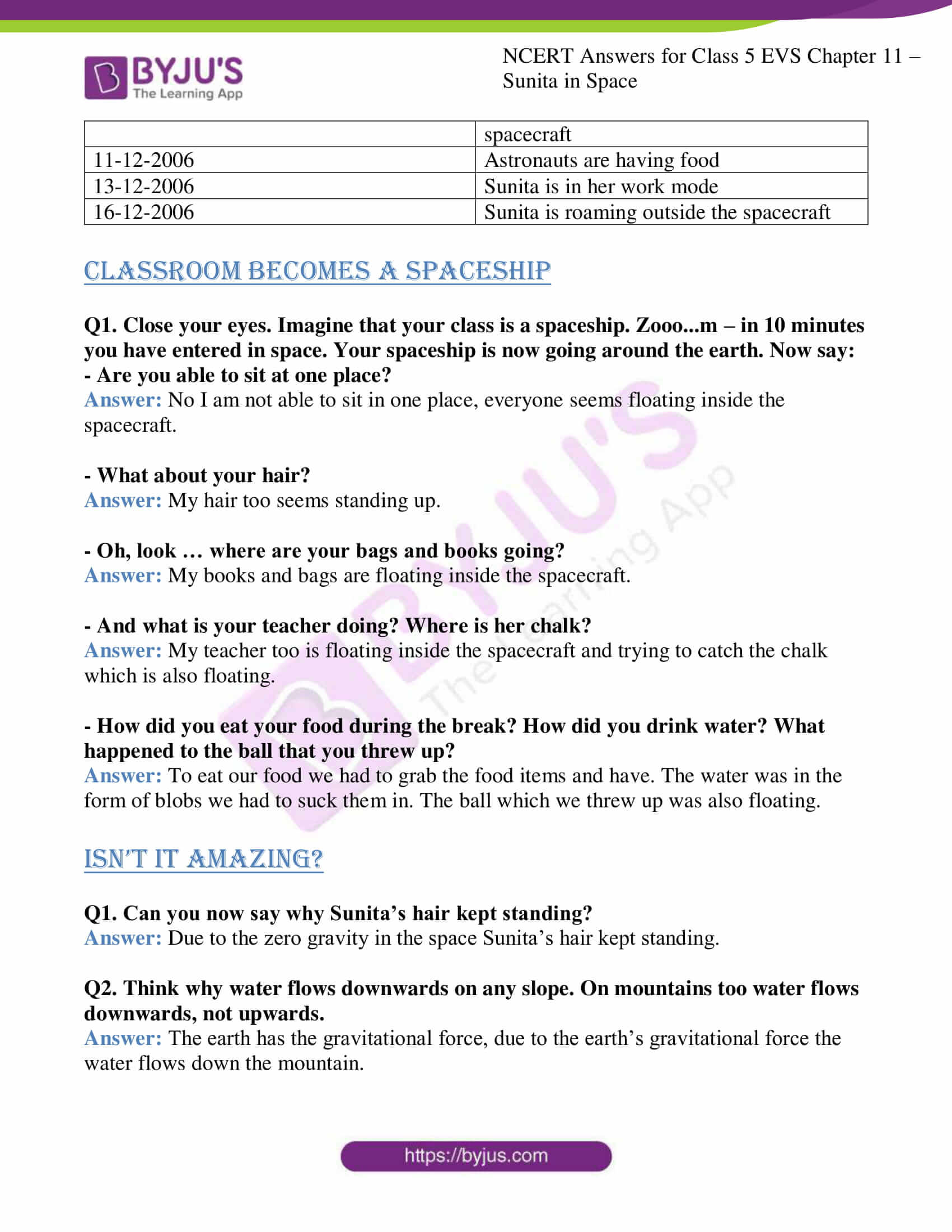 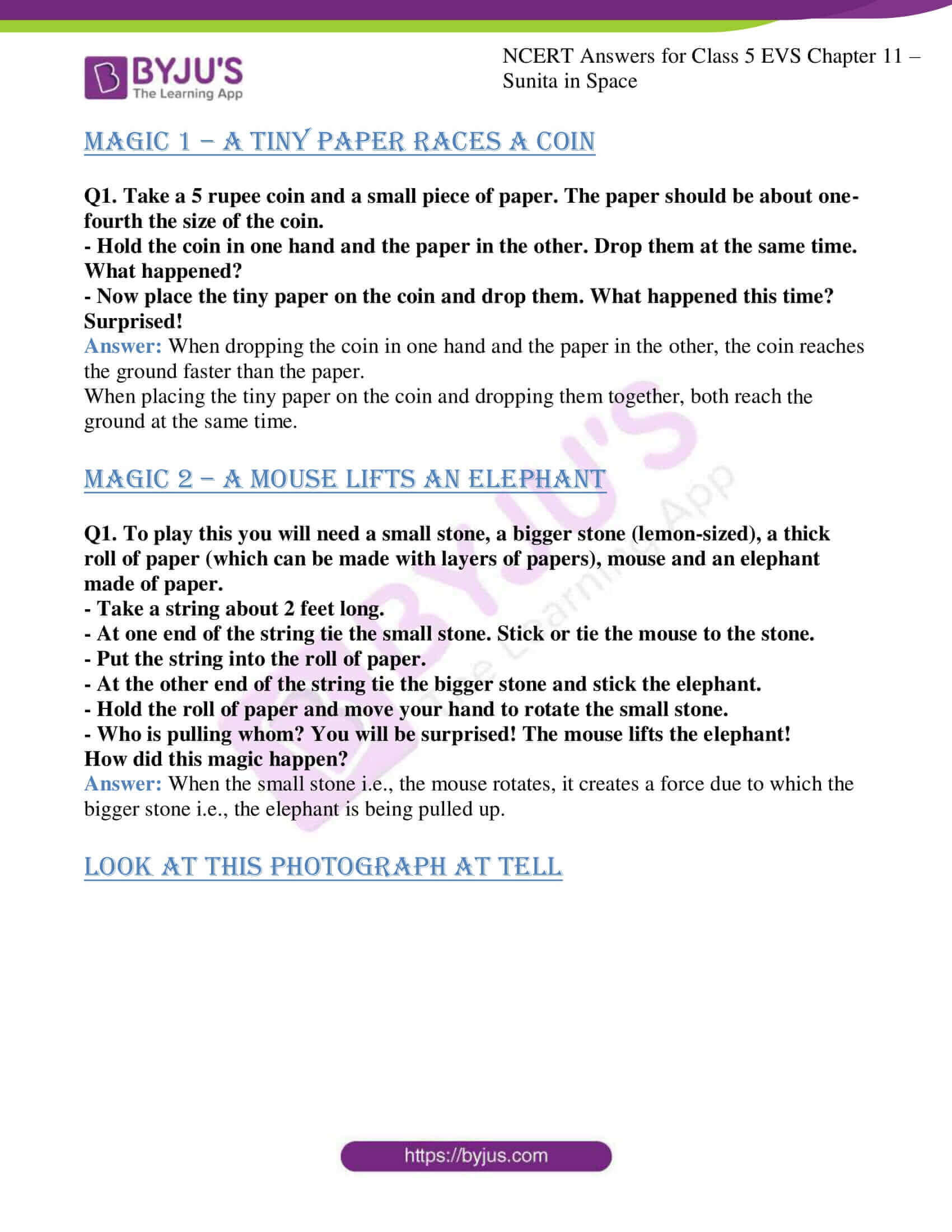 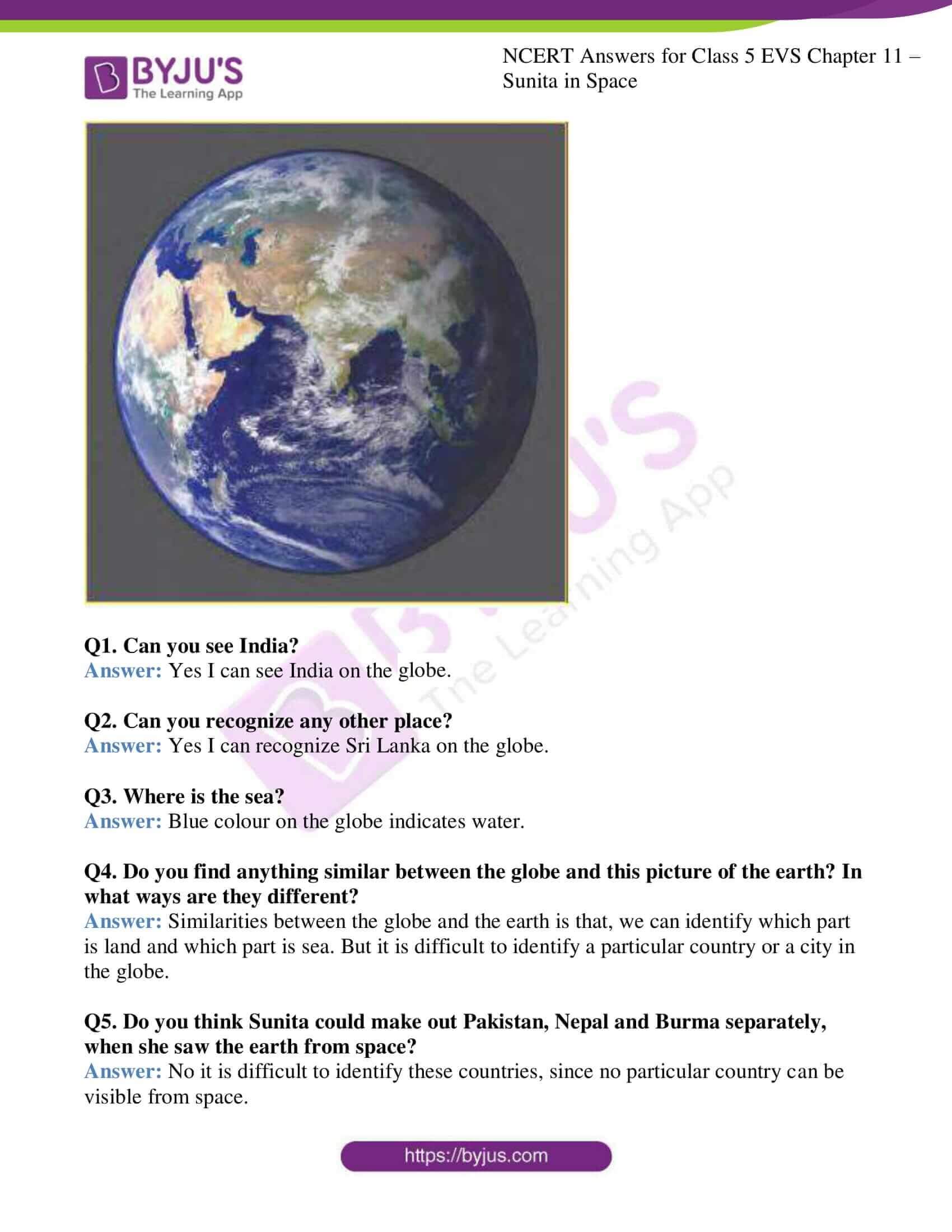 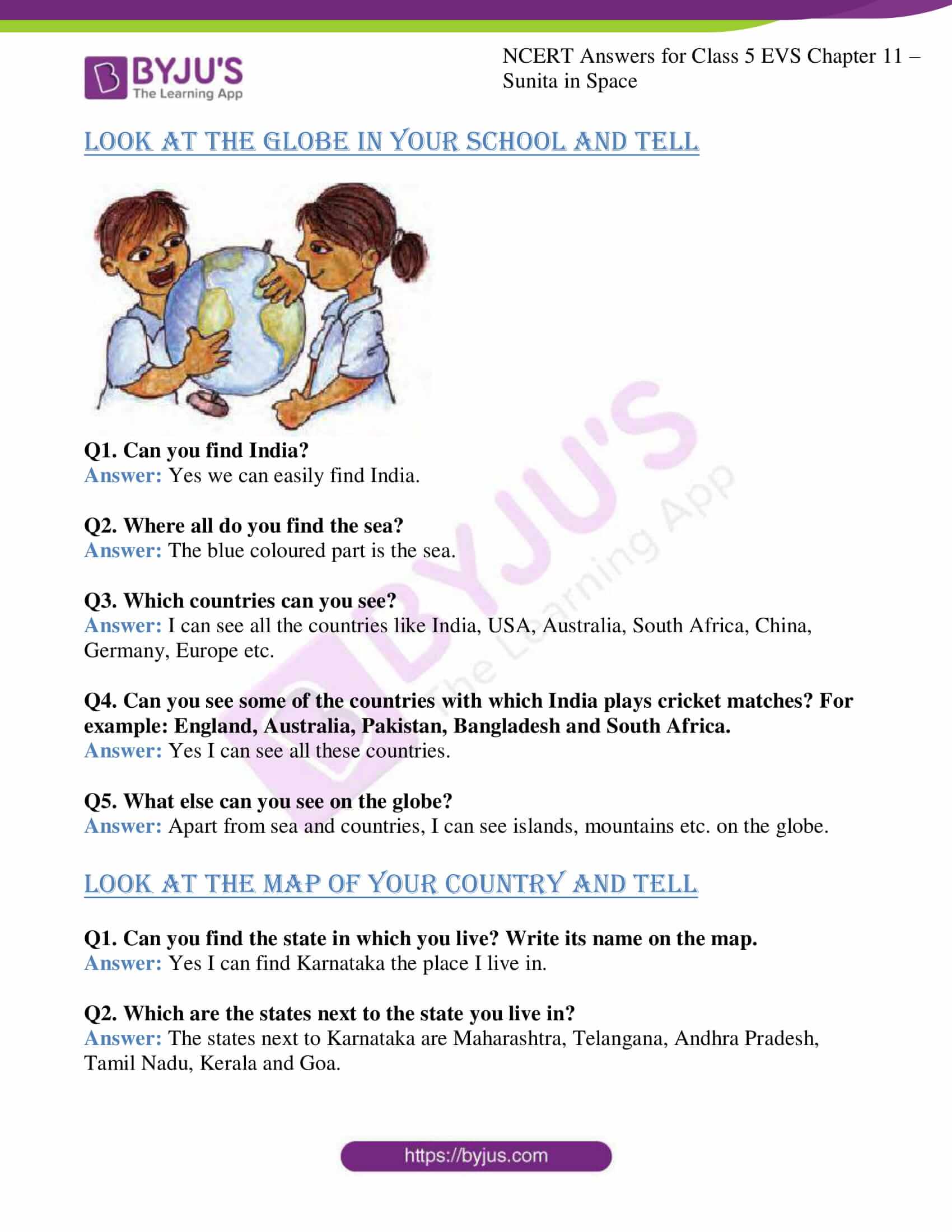 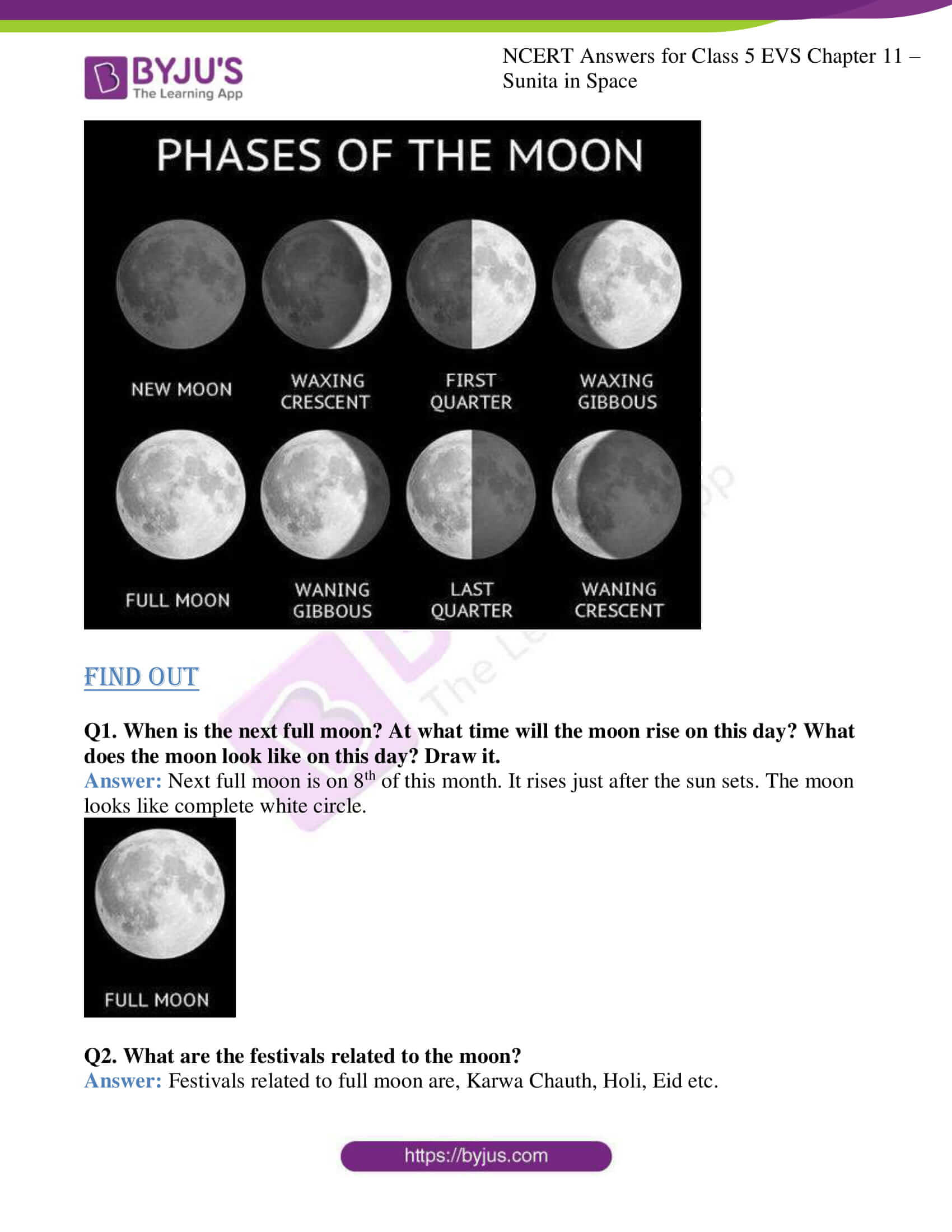 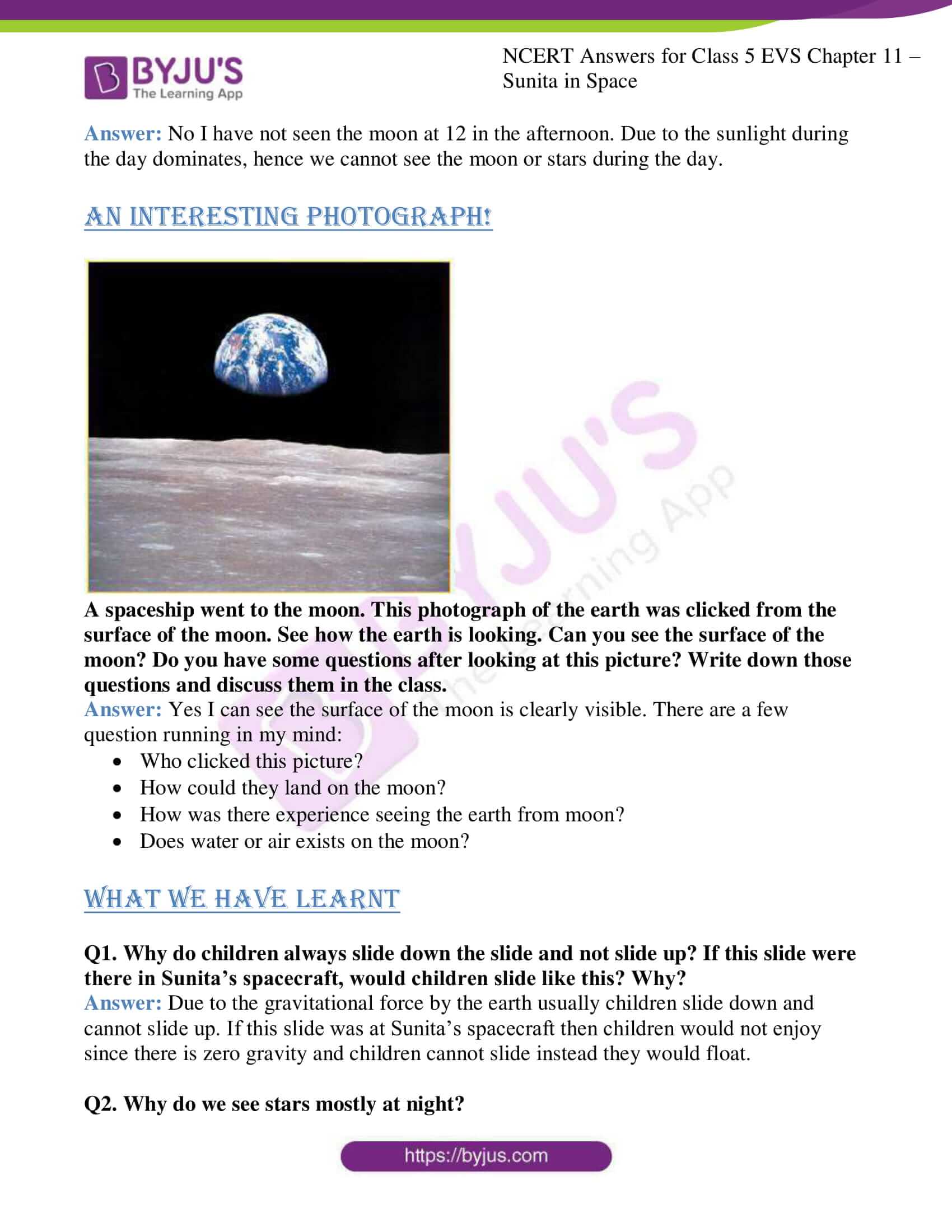 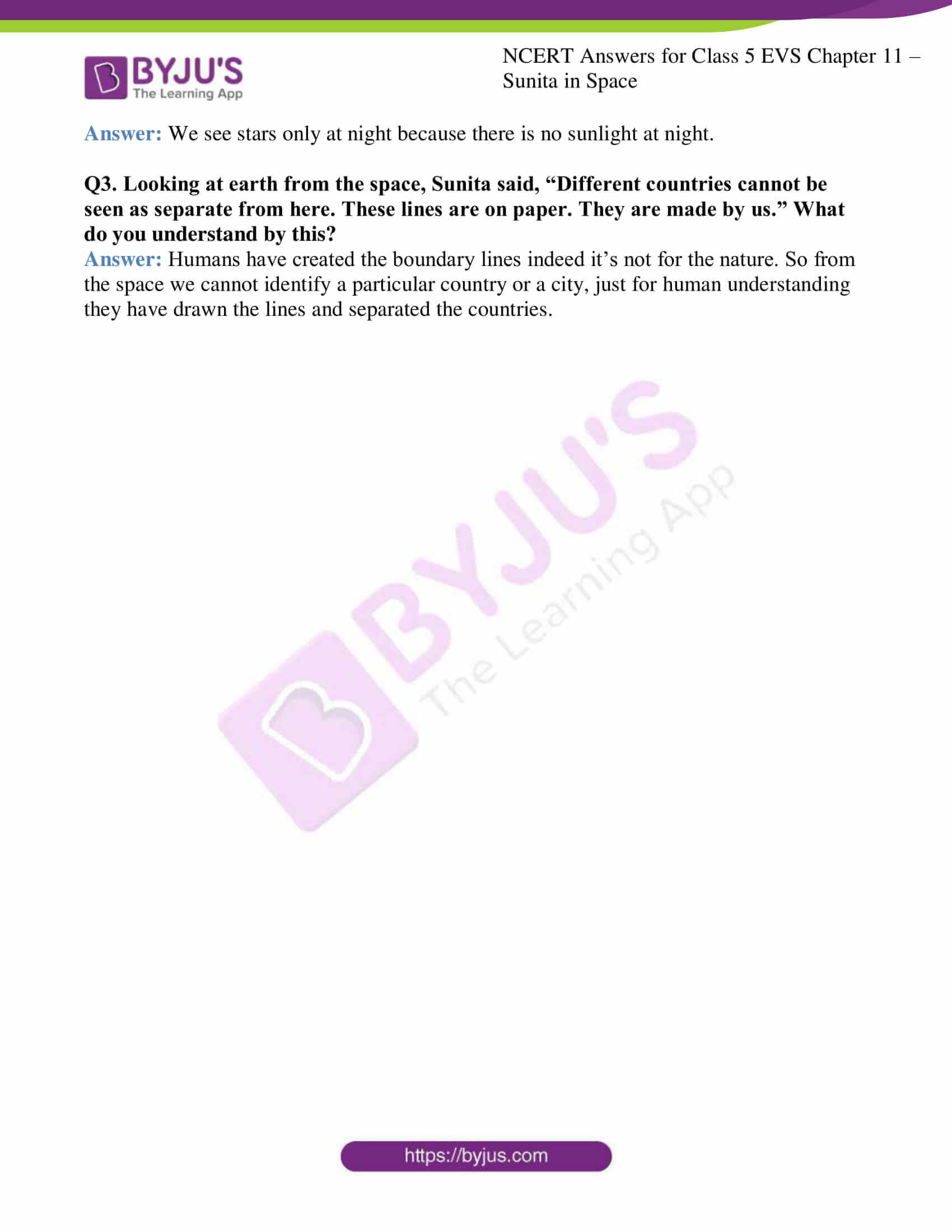 Straight from the heart

Q1. What do you think the earth looks like? Make a drawing of the earth in your notebook.

Answer: The earth looks like a sphere in shape. Here is the picture of the earth: 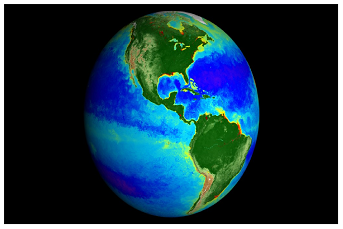 What do you think

Q1. If the earth is round like a globe, how is it that we do not fall off?

Answer: Due to the gravitational pull from the earth towards itself, we won’t fall down.

Q2. Do the people in Argentina stand upside down?

Answer: No, they don’t stand upside down. There is no concept like standing upwards or downwards, everything is relative.

Look at the photograph and write 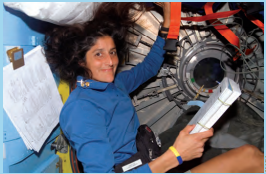 Q1. Can you think why Sunita’s hair was standing?

Answer: Sunita’s hair was standing because she was in space, and there is zero gravity which makes everything float.

Q2. Look at Sunita’s photographs and the dates written on each of them. Write what all is happening and when? 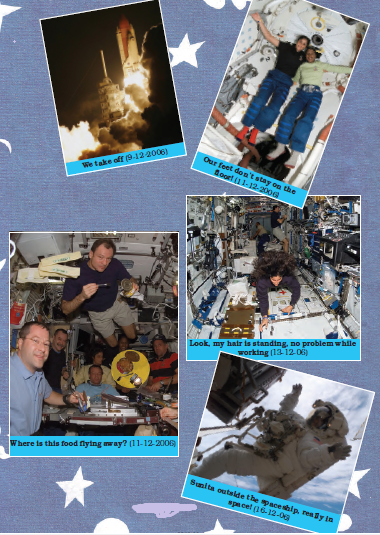 The classroom becomes a spaceship

Q1. Close your eyes. Imagine that your class is a spaceship. Zooo…m – in 10 minutes you have entered in space. Your spaceship is now going around the earth. Now say:

– Are you able to sit at one place?

Answer: No, I am not able to sit in one place. Everyone seems to be floating inside the spacecraft.

– What about your hair?

Answer: My hair too seems to be standing up.

– Oh, look … where are your bags and books going?

Answer: My books and bags are floating inside the spacecraft.

– And what is your teacher doing? Where is her chalk?

Answer: My teacher too is floating inside the spacecraft and trying to catch the chalk, which is also floating.

– How did you eat your food during the break? How did you drink water? What happened to the ball that you threw up?

Answer: To eat our food, we had to grab the food items and have them. The water was in the form of blobs we had to suck them in. The ball which we threw up was also floating.

Q1. Can you now say why Sunita’s hair kept standing?

Answer: Due to the zero gravity in space, Sunita’s hair kept standing.

Q1. Take a 5 rupee coin and a small piece of paper. The paper should be about one-fourth the size of the coin.

– Hold the coin in one hand and the paper in the other. Drop them at the same time. What happened?

– Now place the tiny paper on the coin and drop them. What happened this time? Surprised!

Answer: When dropping the coin in one hand and the paper in the other, the coin reaches the ground faster than the paper.

When placing the tiny paper on the coin and dropping them together, both reach the ground at the same time.

Magic 2 – A mouse lifts an elephant

Q1. To play this you will need a small stone, a bigger stone (lemon-sized), a thick roll of paper (which can be made with layers of papers), mouse and an elephant made of paper.

– Take a string about 2 feet long.

– At one end of the string tie the small stone. Stick or tie the mouse to the stone.

– Put the string into the roll of paper.

– At the other end of the string tie the bigger stone and stick the elephant.

– Hold the roll of paper and move your hand to rotate the small stone.

– Who is pulling whom? You will be surprised! The mouse lifts the elephant!

How did this magic happen?

Look at this photograph and tell 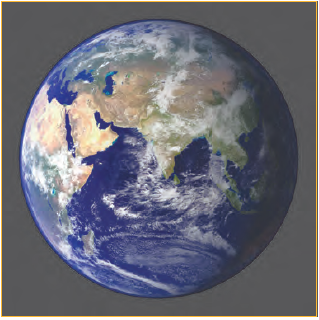 Answer: Yes, I can see India on the globe.

Q2. Can you recognize any other place?

Answer: Yes, I can recognize Sri Lanka on the globe.

Q4. Do you find anything similar between the globe and this picture of the earth? In what ways are they different?

Answer: Similarities between the globe and the earth is that we can identify which part is land and which part is the sea. But it is difficult to identify a particular country or a city on the globe.

Q5. Do you think Sunita could make out Pakistan, Nepal and Burma separately, when she saw the earth from space?

Answer: No, it is difficult to identify these countries since no particular country can be visible from space.

Look at the globe in your school and tell 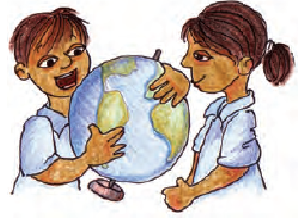 Q2. Where all do you find the sea?

Answer: The blue-coloured part is the sea.

Q3. Which countries can you see?

Answer: I can see all the countries like India, the USA, Australia, South Africa, China, Germany, Europe, etc.

Q4. Can you see some of the countries with which India plays cricket matches? For example: England, Australia, Pakistan, Bangladesh and South Africa.

Answer: Yes, I can see all these countries.

Q5. What else can you see on the globe?

Answer: Apart from the sea and countries, I can see islands, mountains, etc., on the globe.

Look at the map of your country and tell

Q1. Can you find the state in which you live? Write its name on the map.

Answer: Yes, I can find Karnataka, the place I live in.

Q2. Which are the states next to the state you live in?

Answer: The states next to Karnataka are Maharashtra, Telangana, Andhra Pradesh, Tamil Nadu, Kerala and Goa.

Q3. Have you been to any other state?

Answer: Yes, I have been to Maharashtra, Telangana, Andhra Pradesh, Tamil Nadu states.

Q4. Shahmir thinks that there are lines drawn on the ground between the states. What do you think?

Answer: I think these lines are just on the map and not for real.

Look at the sky

Q1. Why don’t you try to do the same with a coin? How many centimetres away from the eye did you keep the coin to hide the moon?

Answer: To hide the moon completely, we have to keep the coin at a distance of 25 centimetres away from the eye.

Answer: I think the moon is round like a ball.

Q2. Look at the moon tonight and draw what it looks like. Look and draw again after one week, and then after 15 days.

Here are the phases of moon: 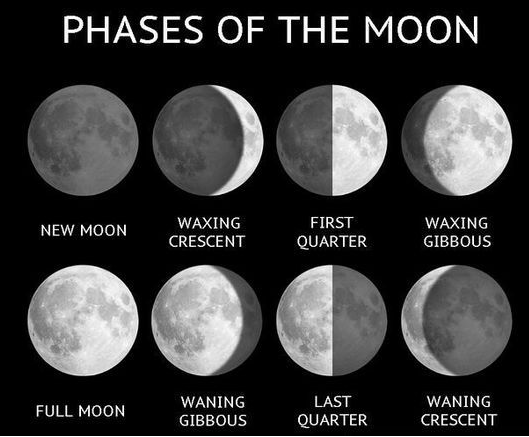 Answer: The next full moon is on the 8th of this month. It rises just after the sun sets. The moon looks like a complete white circle.

Q2. What are the festivals related to the moon?

Q3. At night look at the sky carefully for 5 minutes.

– What could you see?

Answer: At night, I could see the moon and the stars.

– Did you see anything moving in the sky? What do you think it could be? A star or a shooting star or a satellite (satellites are used for the TV, telephones and for weather reports). Find out more about this.

Answer: Yes, I saw something moving in the sky. Maybe it is a shooting star since it crosses off faster. In case it is a satellite, it would move very slowly.

Look at the table and tell

Q1. Given below are the times at which the moon rises and sets in Delhi (on the given days).

– On 29 October, there was a difference of 1 hour and 1 minute in the time of the moon rise (as compared to 28 October).

Q2. If you saw the moon rising at 7 pm today, would you see it at the same time tomorrow?

Answer: No, the moon rises at different times on different days.

Q3. On 31 October, the time of setting of the moon is given as 12:03. Have you ever seen the moon at 12 in the afternoon? Why don’t we easily see the moon or stars during the day?

Answer: No, I have not seen the moon at 12 in the afternoon. Due to the dominating sunlight during the day, we cannot see the moon or stars during the day. 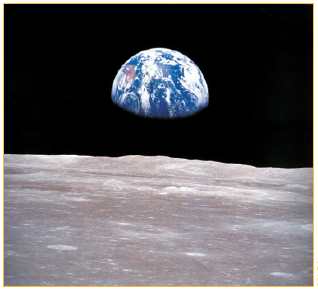 Answer: Yes, I can see the surface of the moon clearly. There are a few questions running through my mind:

Q1. Why do children always slide down the slide and not slide up? If this slide were there in Sunita’s spacecraft, would children slide like this? Why?

Answer: Due to the gravitational force of the earth, children slide down and cannot slide up. If this slide was in Sunita’s spacecraft, then children would not enjoy it since there is zero gravity and children cannot slide; instead, they would float.

Q2. Why do we see stars mostly at night?

Answer: We see stars only at night because there is no sunlight at night.

Q3. Looking at earth from the space, Sunita said, “Different countries cannot be seen as separate from here. These lines are on paper. They are made by us.” What do you understand by this?

Answer: Humans have created boundary lines; indeed, it’s not nature. So from space, we cannot identify a particular country or a city; just for human understanding, they have drawn the lines and separated the countries.