NCERT Solutions Class 5 EVS Chapter 10 covers the topic – Walls Tell Stories. This chapter talks about the art of ancient monument of India like the Golconda fort. This chapter in the NCERT publications sheds light on the beautiful wall architecture of the ancient monument. At BYJU’S you can download Class 5 science notes, PDFs, NCERT textbooks – NCERT class 5 science books and also Class 5 NCERT solutions along with other study materials. 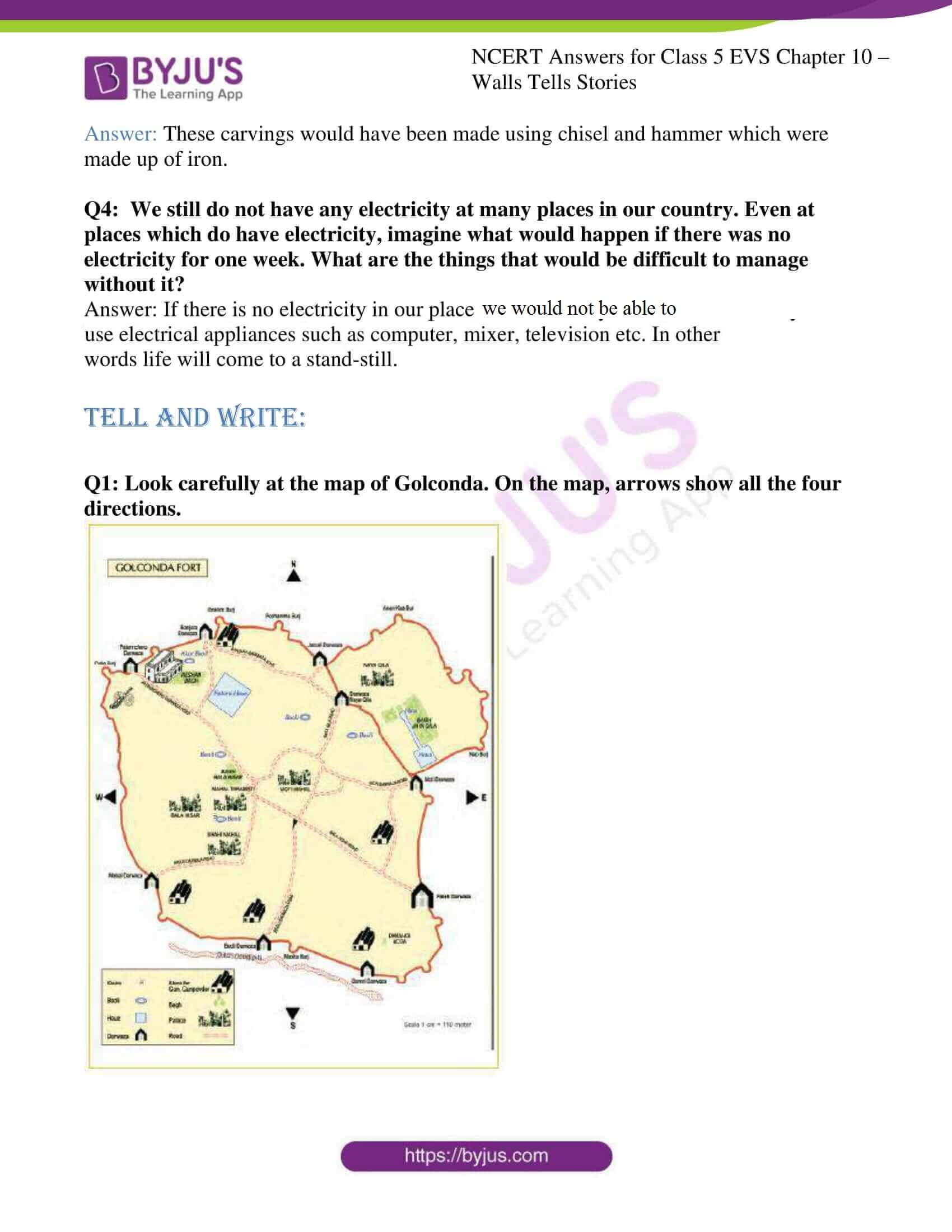 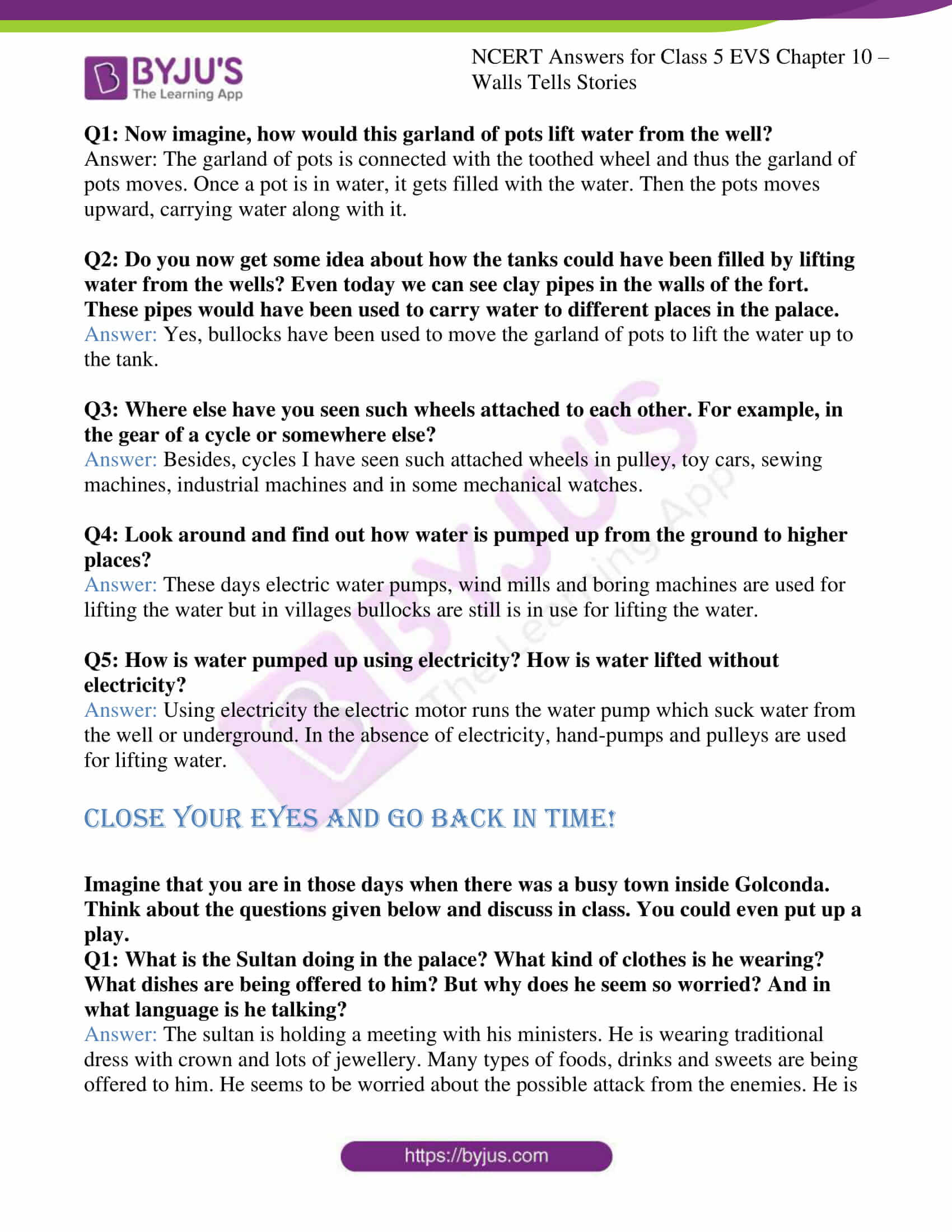 Q1: Why were bastions made in the fort wall?

Answer: Bastions were made in the fort wall to ensure security of the fort.

Q2: Why were big holes made in them?

Answer: Big holes made in fort wall to increase the viewing area thus soldiers could look through these holes and could keep a better vigilance.

Q3: What difference would be there if you were to look from a straight flat wall or a bastion at a height? How would the soldiers find peeping from the holes in the bastions useful while attacking?

Answer: Bastions were made in the fort in such a way that soldiers can easily peep from the holes and it provided better vantage point where a large area could be seen. It would not have been possible from a flat wall.

Q1: How would the fountains have worked?

Answer: Fountains would have got water supply from a large tanks.

Q2: What arrangements would have been made in the building for air and light?

Answer: Large windows, doors and ventilators would have been made in the building for air and light.

Q3: Look carefully at the picture of the beautiful carving on the wall. What kind of tools would have been used for such fine carving? 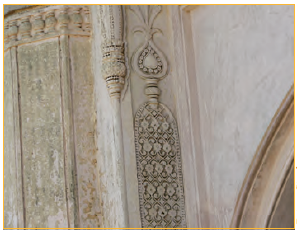 Answer: These carvings would have been made using chisel and hammer which were made up of iron.

Q4: We still do not have any electricity at many places in our country. Even at places which do have electricity, imagine what would happen if there was no electricity for one week. What are the things that would be difficult to manage without it?

Answer: If there is no electricity in our place we would not be able to use electrical appliances such as computer, mixer, television etc. In other words, life will come to a stand-still.

Q1: Look carefully at the map of Golconda. On the map, arrows show all the four directions. (a): If you are peeping inside from Bodli Darwaza, in which direction from you is Katora Hauz?

Answer: Katora Hauz is in north direction if we peep inside from Bodli Darwaza.

(b) If someone is entering from Banjara Darwaza, in which direction from her is Katora Hauz?

(c) In which direction will you walk from Bala Hisar to reach Moti Mahal?

Answer: If we walk in east direction of Bala Hisar we will reach Moti Mahal.

(d) How many gates can you see on the outer walls of the fort?

Answer: There are nine gates on outer walls of the fort.

(e) Count how many palaces are there in the fort?

Answer: There are three palaces in the fort.

(f) What arrangements for water can you see inside the fort? For example, wells, tanks, step wells.

Answer: There were five baolis and three hauz for water.

Q2: On the map, 1 cm distance is equal to a distance of 110 metres on the ground. Now tell

(b) How far is Makai Darwaza from Fateh Darwaza?

Q1: Have you recently read or heard about any country attacking or going to war with another country?

Q2: Find out what was the reason for this war.

Answer: Due to military issues and weapons.

Q3: What kind of weapons were used in this war?

Q4: What kind of destruction was caused because of this?

Answer: Commander of Iranian force was killed and many building were damaged.

The big gun that Shreedhar saw was made of bronze.

Q1: Have you seen anything made of bronze? What?

Answer: Yes, I have seen statues, medals, utensils and lamps are made up of bronze.

Answer: With the help of my elders I could find following things:

Copper are of reddish brown in colour and I found utensils and statues of god.

Brass are of yellowish in colour and I found some utensils of brass.

Bronze are in shiny grey in colour and I found medals and lamps.

Look, this pole shown under the ground joins with another wheel which has a number of pots on it. Q1: Now imagine, how would this garland of pots lift water from the well?

Q2: Do you now get some idea about how the tanks could have been filled by lifting water from the wells? Even today we can see clay pipes in the walls of the fort. These pipes would have been used to carry water to different places in the palace.

Answer: Yes, bullocks have been used to move the garland of pots to lift the water up to the tank.

Q3: Where else have you seen such wheels attached to each other. For example, in the gear of a cycle or somewhere else?

Answer: Besides, cycles I have seen such attached wheels in pulley, toy cars, sewing machines, industrial machines and in some mechanical watches.

Q4: Look around and find out how water is pumped up from the ground to higher places?

Answer: Using electricity the electric motor runs the water pump which suck water from the well or underground. In the absence of electricity, hand-pumps and pulleys are used for lifting water.

Close your eyes and go back in time!

Imagine that you are in those days when there was a busy town inside Golconda. Think about the questions given below and discuss in class. You could even put up a play.

Q1: What is the Sultan doing in the palace? What kind of clothes is he wearing? What dishes are being offered to him? But why does he seem so worried? And in what language is he talking?

Answer: The sultan is holding a meeting with his ministers. He is wearing traditional dress with crown and lots of jewellery. Many types of foods, drinks and sweets are being offered to him. He seems to be worried about the possible attack from the enemies. He is talking in Persian.

Q2: Imagine the rooms in the palace—the beautiful carpets and curtains, the fountains on the terrace… and the sweet smell of roses and chameli—where is this coming from?

Answer: The room is looking luxurious decorated by beautiful carpets and curtains. Fountains are running on the terrace. Beautiful fragrance of roses and chameli are coming from the garden.

Answer: I can see several factories where clothes, utensils and idols are being made. About 30 people are working in a factory. They are working with their tools. They are wearing dhoti with shirt. I think they work for long hours, right from the early mornings to late evenings.

Q4: Look there! See how finely those craftsmen are carving the stones using a chisel and hammer? Can you see the stone dust in the air. Do you think this stone dust would harm them in some way?

Answer: No, this stone dust would not be causing any harm to them as they have wrapped a cloth around their nose and mouth.

Q1: What kinds of pots have you seen around you?

Answer: I have seen pots made up of muds, steel, iron, brass, bronze, glass, copper and paper.

Q2: Try to find out from your grandparents about the other kinds of pots and pans they used in their time?

Answer: During my grandparents time pots were made up of brass and clay and they were very nice and heavy. Sometimes copper was also used.

Q3: Have you ever been to some museum or heard about it? What all things are there in a museum?

Answer: Yes, I had visited the museum. There are many antiques, manuscripts and other things of historical importance are kept in a museum.