NCERT Class 5 EVS Chapter 14 teaches children about natural calamities and their different types. The chapter also explains the help extended by hospitals, community help, relief organisations, etc. to calamity stricken areas. The Bhuj earthquake which occurred in the year 2001, is discussed with reference to damages that occur during an earthquake and the ways to look for help in case of an earthquake. It is important for students to know where to look for help in times of natural disasters because it will help them to save lives. Students can refer to NCERT Solutions and download the solutions pdf from the links given below. 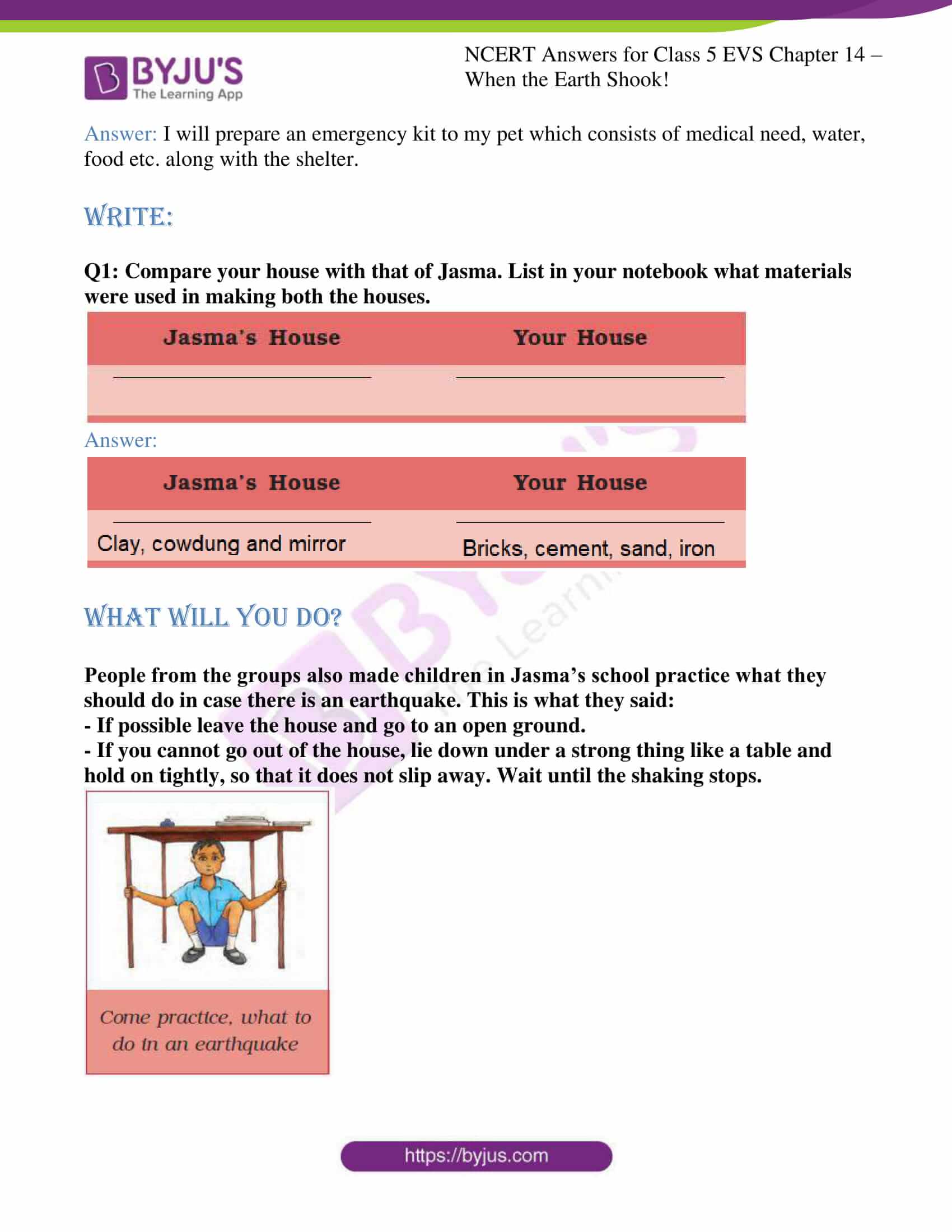 Imagine, being without a house in the cold winter! Fear and the cold kept us awake in the nights. All the time we were worried that there may be another earthquake.

Q1: Have you or anyone that you know ever faced such difficulty?

Answer: No, but I heard in the television news.

Q2: Who all helped at such a time? Make a list.

Answer: In such difficulty many people like neighbor states people, military force, doctors and political leaders helped them.

Q1: A lot of people from other places came to Jasma’s village. Who were these people? In what ways would they have helped the villagers?

Answer: Many people came from cities to Jasma’s village. Some of them from non – government organizations, some of them were scientists, some of them are doctors and medical personnel.

They would have helped by bringing in the much needed relief. They brought food, clothes, and medicines. The scientists wanted to identify areas which were more prone to getting earthquakes. Doctors and medical personnel provided first aid to them.

Q2: People in Jasma’s village rebuilt their houses with suggestions from the engineers. Will these houses be safer than before in case there is an earthquake again? Why?

Answer: The engineers gave suggestions to build houses so that there would be least damage in case of earthquake. So, these house would be safer in case there is an earthquake again.

Q3: Think, if there were an earthquake where you live, would your house be in danger?

Answer: In case of an earthquake in my area, my house would definitely be in danger. The worst is the possibility of the roof getting collapsed. It can also damage the household items and cause injuries to us.

Q4: What will you do to save pet animals during natural disaster?

Answer: I will prepare an emergency kit to my pet which consists of medical need, water, food etc. along with the shelter.

Q1: Compare your house with that of Jasma. List in your notebook what materials were used in making both the houses.

What will you do?

People from the groups also made children in Jasma’s school practice what they should do in case there is an earthquake. This is what they said:

– If possible leave the house and go to an open ground.

– If you cannot go out of the house, lie down under a strong thing like a table and hold on tightly, so that it does not slip away. Wait until the shaking stops. Q1: Have you been told in your school or anywhere else about what to do in case of an earthquake?

Q2: Why do you think one should go under a table during an earthquake?

Read this TV report on the Bhuj earthquake. 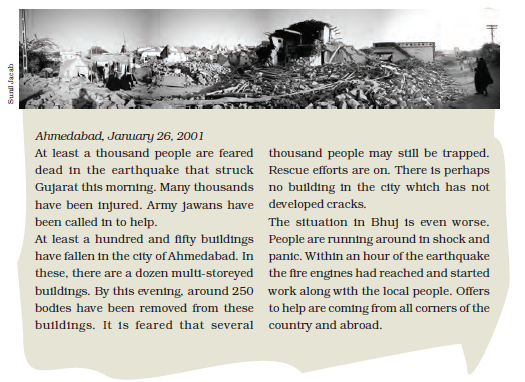 Q1: According to the TV report, thousands of people were injured and some died in Gujarat. If the buildings had been made in a way that they would not fall in the earthquake, would the damage have been different? How?

Q2: At times like this, when people have lost their homes and all their belongings, what kind of help would they need?

Answer: At such times people will need tents to prepare huts and basic needs like cloth, food, water and medicines.

Q3: In such situations whose help would be needed and for what? Write in your notebook as shown here.

Q1: Have you ever seen people in your area helping each other? When?

Answer: Yes, I have seen people helping each other during accidents.

Q2: Why do people live together in a neighborhood?

Answer: Because to share their happiness as well as to help each other in difficult times.

Q3: Imagine living in a place where there were no other houses or people around. How would it be? For example, whom would you play with? With whom would you celebrate festivals and special days? Would you be scared?

Answer: It would be definitely a difficult situation, my festivals and special days would be boring without anyone. Of course it would be very scary.

NCERT Solutions contains questions such as –

Think, if there were an earthquake where you live, would your house be in danger? What kind of damage could take place?

Why do you think one should go under a table during an earthquake?

These are a few questions from the Class 5 EVS Chapter 14. If you wish to know more, view the solutions above.