Class 4 EVS Chapter 10 Hu Tu Tu Hu Tu Tu is an adventurous chapter in the syllabus. This chapter includes questions regarding the game Kabaddi, about the student’s interest in sports, and also provides a series of questions and easy to solve topics. We are offering NCERT Solutions for Class 4 EVS Chapter 4 here. Students can refer to NCERT Solutions and can easily download the available pdf from the links given below. 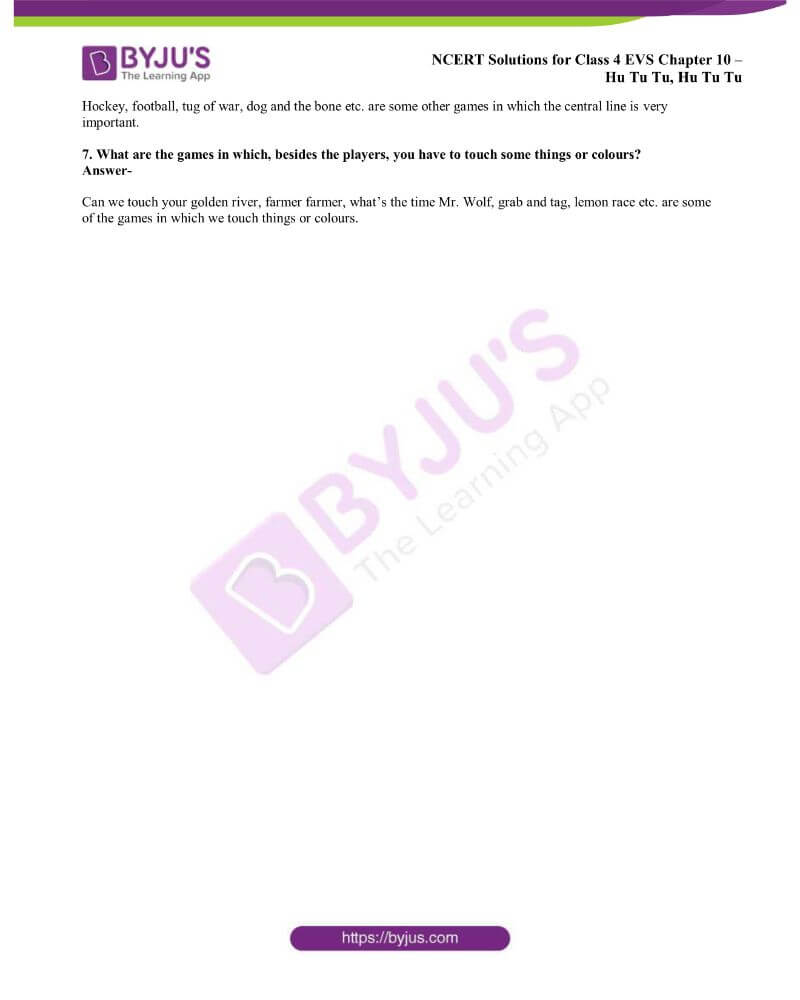 1. When you play Kabaddi, how many players do you have in a team?

When we play Kabaddi, there are 12 players in a team where 7 players play on the ground and 5 others are substitutes.

2. How many players got out when Shyamala touched the line?

6 players got out when Shyamala touched the line.

3. Do you have ways to resolve disputes in games?

To resolve disputes in games we stay calm and listen to referee or umpire. We listen to both the sides and show true sportsmanship.

The Game of Kabaddi

1. Try to hold your breath and keep saying Kabaddi – Kabaddi. How many times could you say it?

I could hold my breath and say ‘Kabaddi-Kabaddi’ about 20-30 times.

2. How many times can you say it, while you are playing Kabaddi? Is there any difference?

I can say about 15-25 times while playing Kabaddi. Yes, there is 5-10 counts difference.

3. Make a picture in your notebook to show how Shyamala managed to get the entire opposing team ‘out’ in one go. 4. What does it mean to be out in games? When does one gets ‘out’ in Kabaddi?

To be out in a game means that the player cannot continue the game for a certain time. There are 3 ways to get out in Kabaddi-

(a) If the player is stopped by the opposite team during his move.

(b) If he touches opposite player and is stopped by the team.

(c) If he stops saying Kabaddi-Kabaddi.

Kho-Kho, Kabaddi, arm wrestling, red light green light, blind man’s buff, Chhupa-chhupai, hide and seek etc. are some games in which it is important to touch the players.

6. In Kabaddi, the entire team was ‘out’, because Shyamala had touched the line. What are some other games in which, the central line is very important?

Hockey, football, tug of war, dog and the bone etc. are some other games in which the central line is very important.

7. What are the games in which, besides the players, you have to touch some things or colours?

Can we touch your golden river, farmer farmer, what’s the time Mr. Wolf, grab and tag, lemon race etc. are some of the games in which we touch things or colours.

1. Have you learnt any game from a coach? Which one?

I learnt games like cricket, basketball and football from coaches.

2. Do you know of anyone who has learnt any game from a coach?

My friends are learning basketball from a coach.

A coach is a person who teaches the players about the tricks of the game. He encourages the player and trains them to lean the game methodically. Players have to practice and work hard on a daily basis for long hours.

4. Have you ever thought of making a club for your favourite game?

Yes. I have thought of making a club for basketball.

5. Imagine that there are 15 children to play Kho-Kho. They must form two teams with equal members (7 each). Then one player will be left. What will you do if this happens? Have you ever become the ‘extra person’ in the middle? Write about this.

I will make two teams with 7 players each and 1 player are the referee.

Yes. I was the extra person in the middle in a basketball match.

6. Every game has some rules. The game is played according to those rules. Let us see what happens if the rules are changed. For example – In cricket, a batsman gets ‘out’, if the bails fall off the stumps. Imagine if there is a rule that the entire team will be ‘out’, if all the three stumps fall. Would it be fun!

Changes in the rules are made always. Playing cricket with new rules gives more fun to both the spectators and the players.

7. Try and play the game with this rule. Similarly, make some rules for other games and play.

Should be done by the students.