NCERT Solutions Class 4 EVS Chapter 7 is one of the pre-eminent material for the 4th grade students studying in the CBSE board. Environmental Studies (EVS) is solicitous with the research, observation and evolution of comprehending of the human, natural, cultural and social aspects of broader and local environments. Students can refer to NCERT Solutions and download the PDF for free from the links given below. 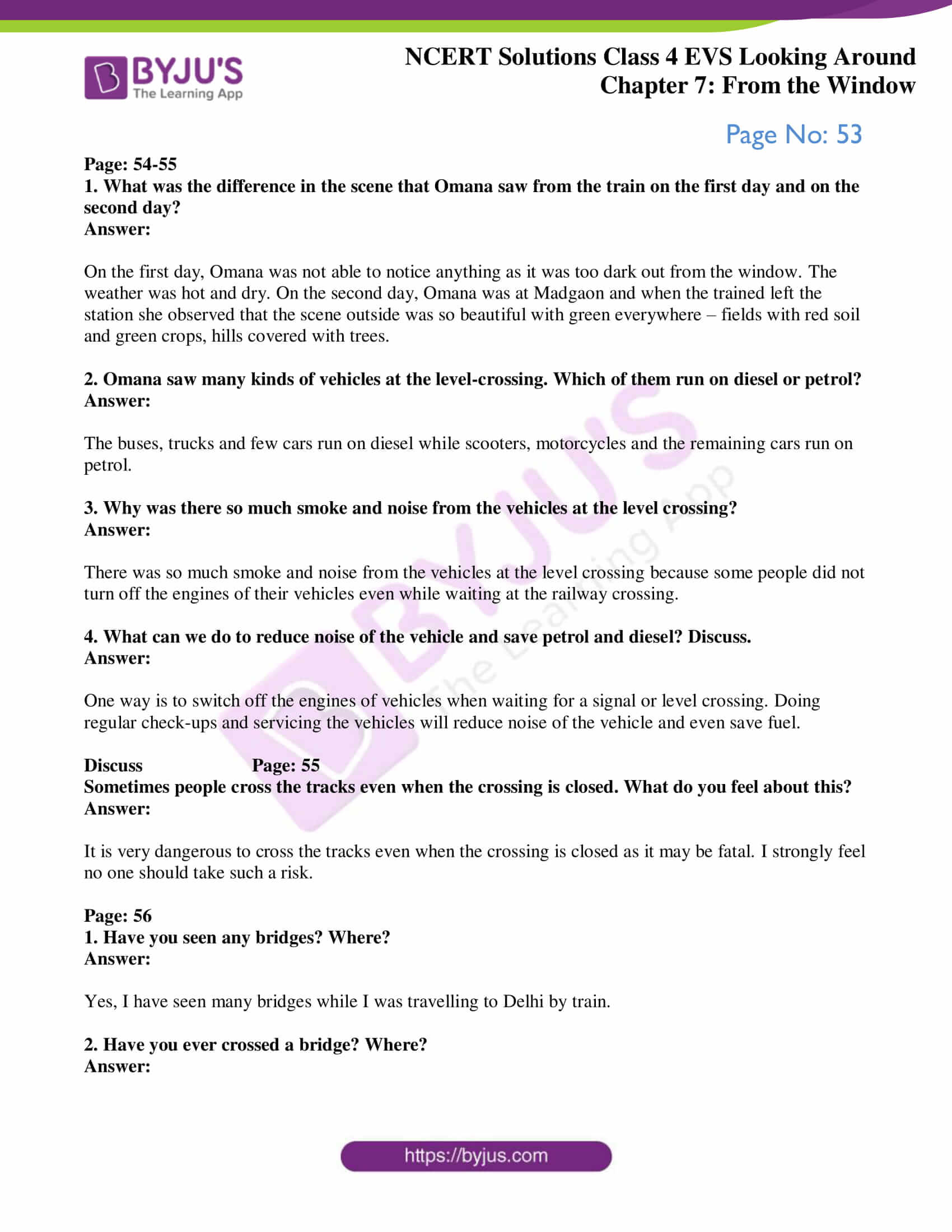 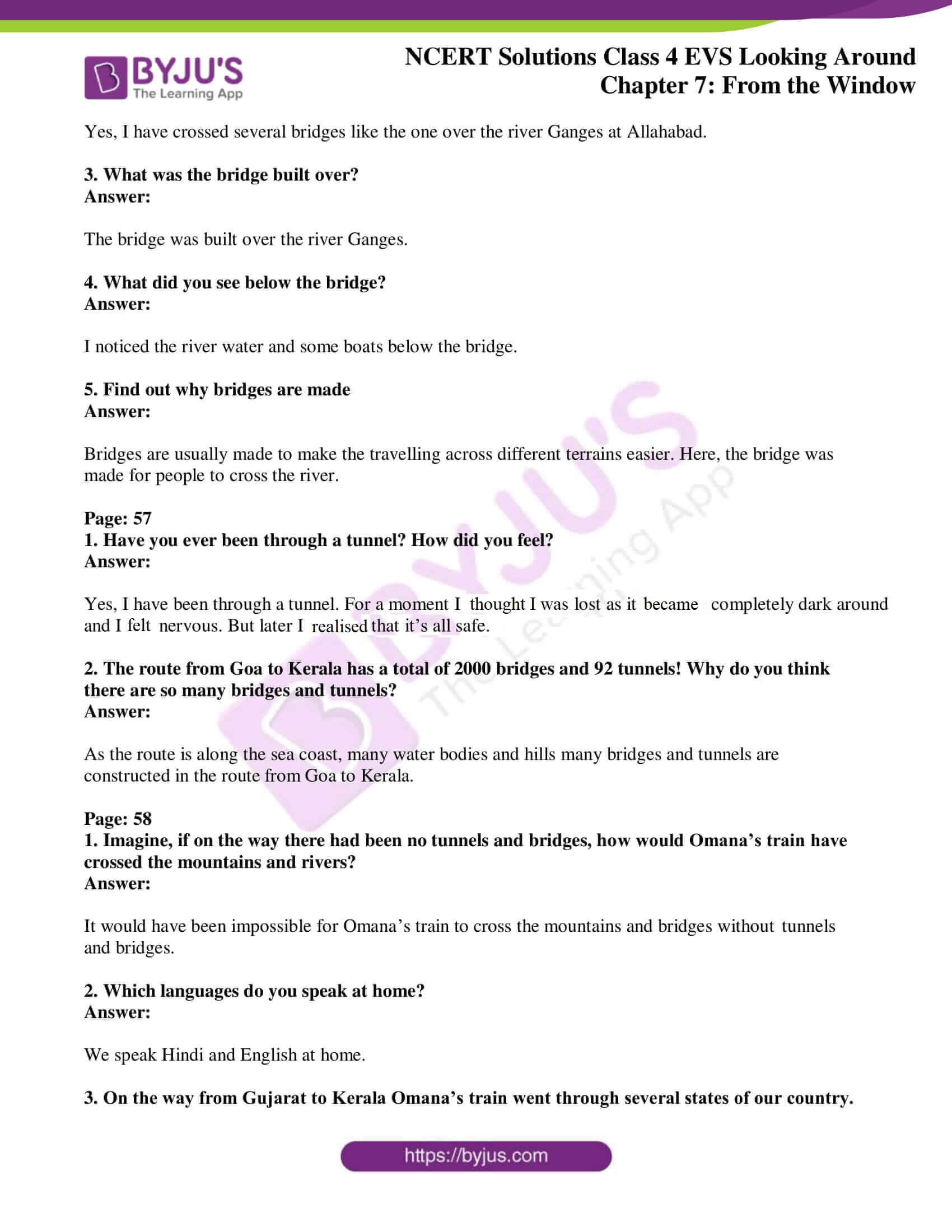 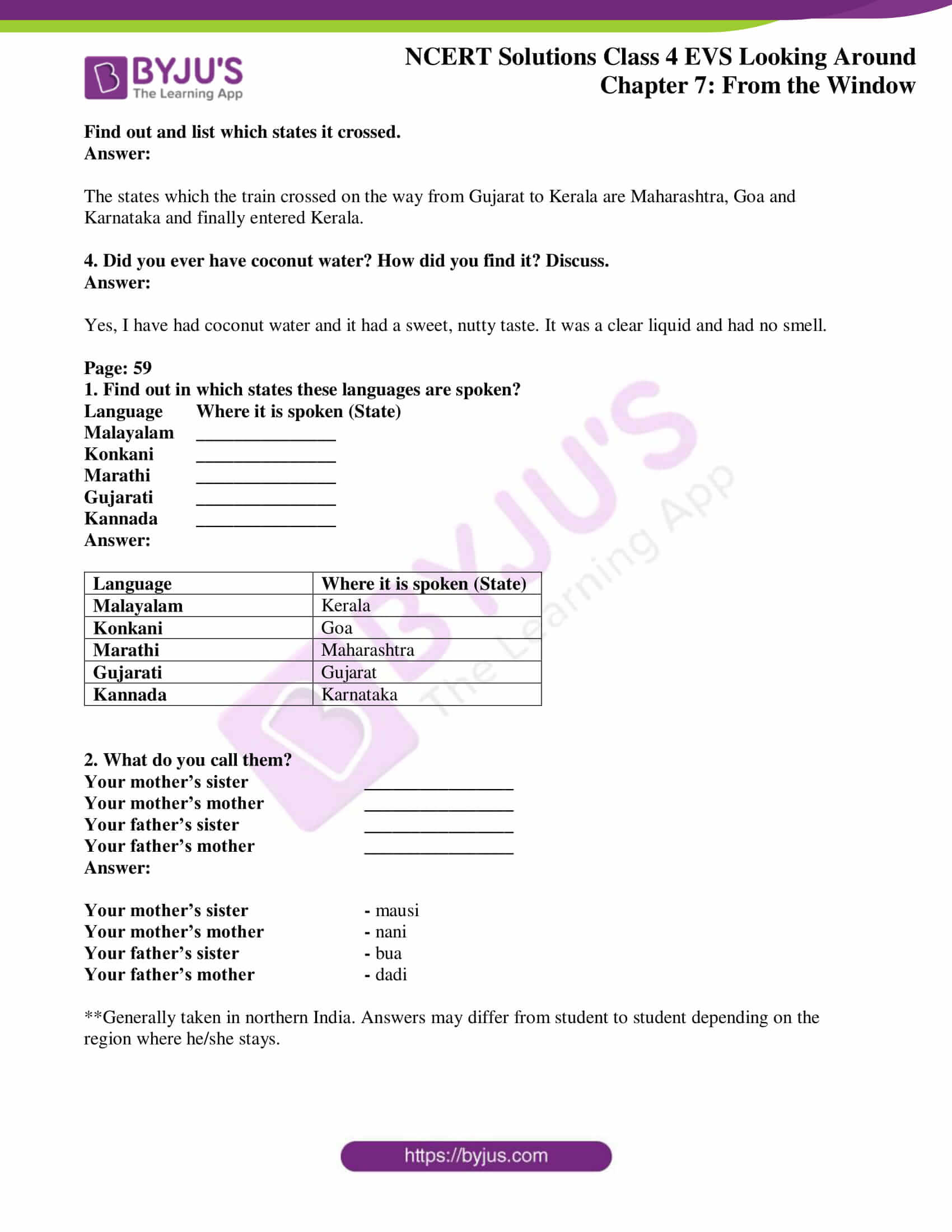 1. What was the difference in the scene that Omana saw from the train on the first day and on the second day?

On the first day, Omana was not able to notice anything as it was too dark out from the window. The weather was hot and dry. On the second day, Omana was at Madgaon and when the trained left the station she observed that the scene outside was so beautiful with green everywhere – fields with red soil and green crops, hills covered with trees.

2. Omana saw many kinds of vehicles at the level-crossing. Which of them run on diesel or petrol?

The buses, trucks and few cars run on diesel while scooters, motorcycles and the remaining cars run on petrol.

3. Why was there so much smoke and noise from the vehicles at the level crossing?

There was so much smoke and noise from the vehicles at the level crossing because some people did not turn off the engines of their vehicles even while waiting at the railway crossing.

4. What can we do to reduce noise of the vehicle and save petrol and diesel? Discuss.

One way is to switch off the engines of vehicles when waiting for a signal or level crossing. Doing regular check-ups and servicing the vehicles will reduce noise of the vehicle and even save fuel.

Sometimes people cross the tracks even when the crossing is closed. What do you feel about this?

It is very dangerous to cross the tracks even when the crossing is closed as it may be fatal. I strongly feel no one should take such a risk.

1. Have you seen any bridges? Where?

Yes, I have seen many bridges while I was travelling to Delhi by train.

2. Have you ever crossed a bridge? Where?

Yes, I have crossed several bridges like the one over the river Ganges at Allahabad.

3. What was the bridge built over?

The bridge was built over the river Ganges.

4. What did you see below the bridge?

I noticed the river water and some boats below the bridge.

5. Find out why bridges are made

Bridges are usually made to make the travelling across different terrains easier. Here, the bridge was made for people to cross the river.

1. Have you ever been through a tunnel? How did you feel?

Yes, I have been through a tunnel. For a moment I thought I was lost as it became completely dark around and I felt nervous. But later I realized that it’s all safe.

2. The route from Goa to Kerala has a total of 2000 bridges and 92 tunnels! Why do you think there are so many bridges and tunnels?

As the route is along the sea coast, many water bodies and hills many bridges and tunnels are constructed in the route from Goa to Kerala.

1. Imagine, if on the way there had been no tunnels and bridges, how would Omana’s train have crossed the mountains and rivers?

It would have been impossible for Omana’s train to cross the mountains and bridges without tunnels and bridges.

2. Which languages do you speak at home?

We speak Hindi and English at home.

3. On the way from Gujarat to Kerala Omana’s train went through several states of our country. Find out and list which states it crossed.

The states which the train crossed on the way from Gujarat to Kerala are Maharashtra, Goa and Karnataka and finally entered Kerala.

4. Did you ever have coconut water? How did you find it? Discuss.

Yes, I have had coconut water and it had a sweet, nutty taste. It was a clear liquid and had no smell.

1. Find out in which states these languages are spoken?

Language Where it is spoken (State)

**Generally taken in northern India. Answers may differ from student to student depending on the region where he/she stays.