NCERT Solutions Class 4 EVS Chapter 2 cover the topic Ear to Ear. This chapter teaches about the ears of different animals and helps in identifying if animals, birds or insects have ears that are visible, hidden or without ears. Kids need to match a particular animal with its ear, state if the statement made about them is true or false and fill in the blanks provided in the questions as well. The textbooks that are published by NCERT are prescribed by CBSE. At BYJU’S, students can download NCERT textbooks, NCERT Class 4 EVS book and other study materials. 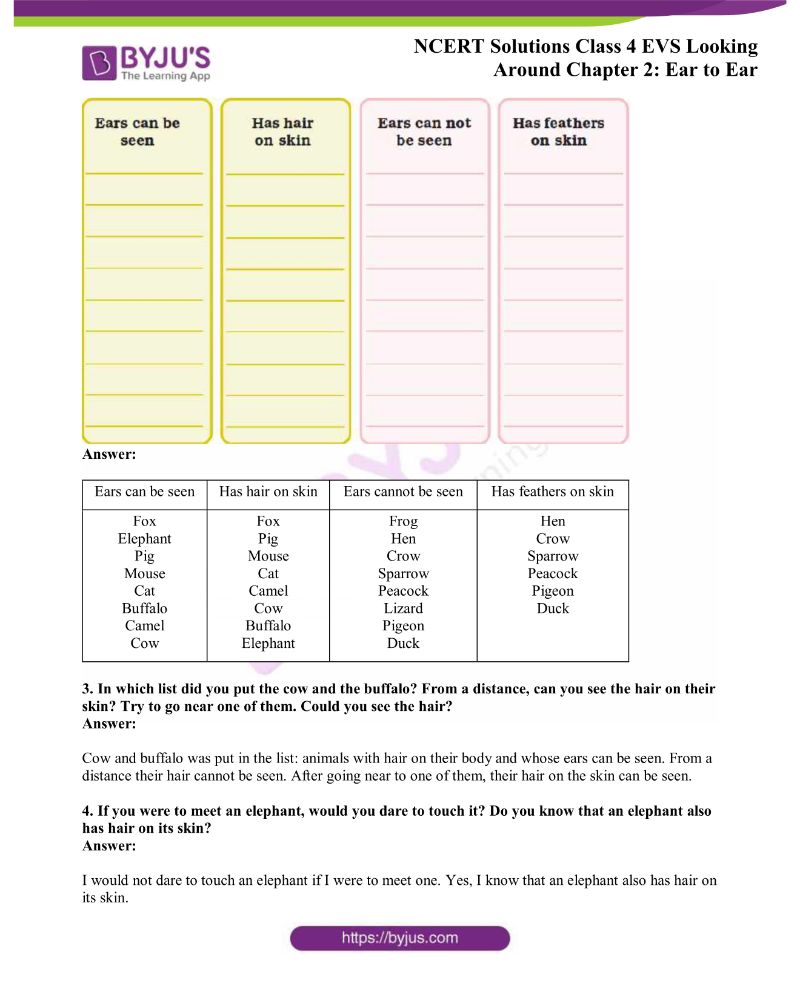 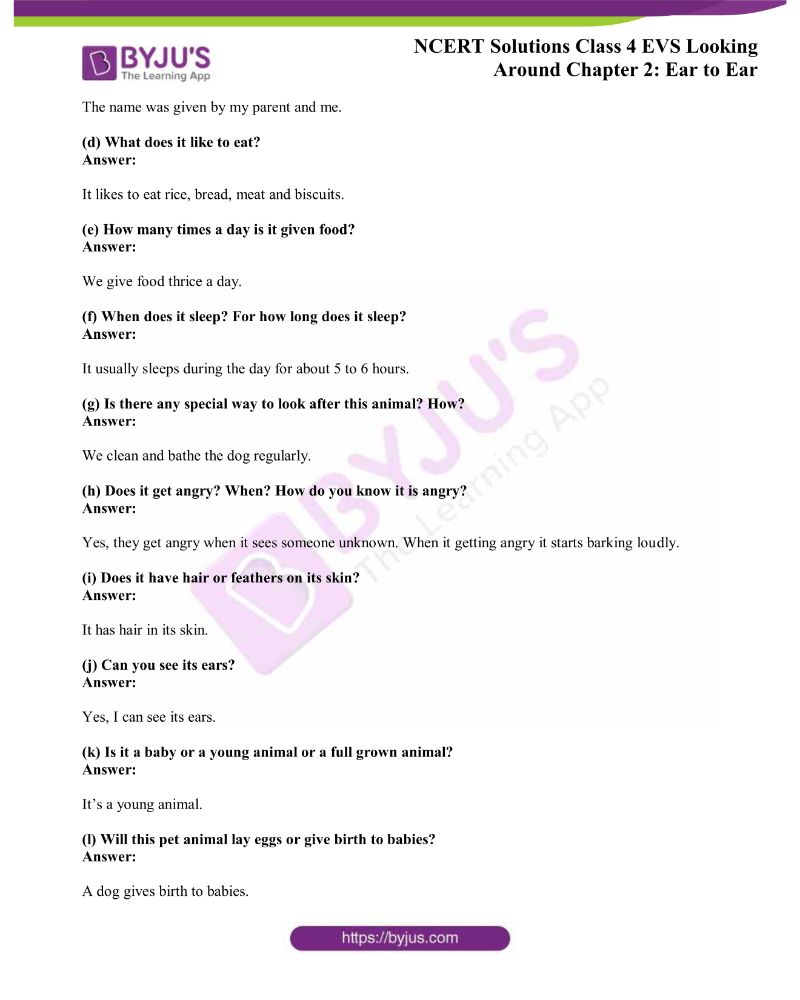 Who has got my ears? 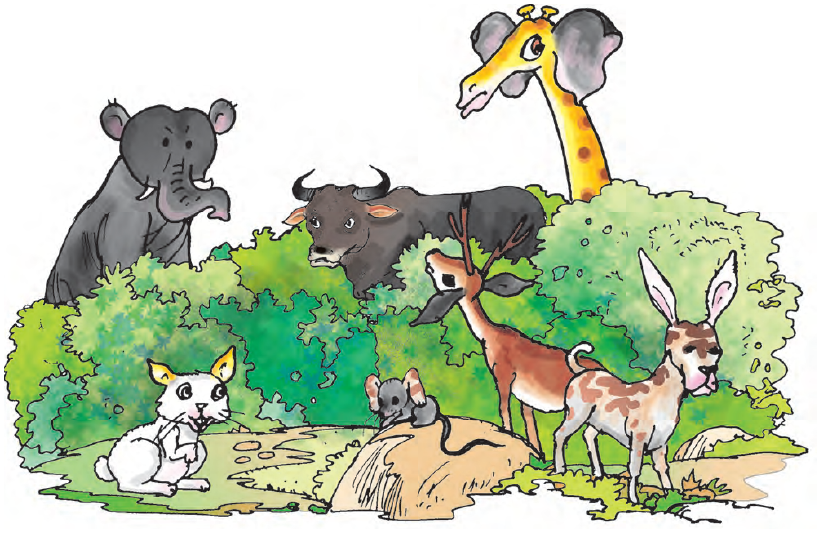 1. Are these animals looking funny? The artist has drawn the wrong ears on the heads of the animals. Give the correct ears to the animals in the space given below.

2. Different animals have different kinds of ears. Among the animals given below, which one has ears that you can see? In which animal can you not see the ears? Write in the table below.

3. Do you think that the animals whose ears we can not see really do not have ears?

No, they have ears, but they are hidden.

Let us obverse this picture

1. Name the animals in the picture.

No, we cannot see their ears.

3. Find out some other animals which have ears that we cannot see. Write their names.

3. An animal with ears on the top of its head.

4. An animal with ears on both sides of its head. 2. You might have seen some of the animals given below.

Put the names of the animals in the table below. 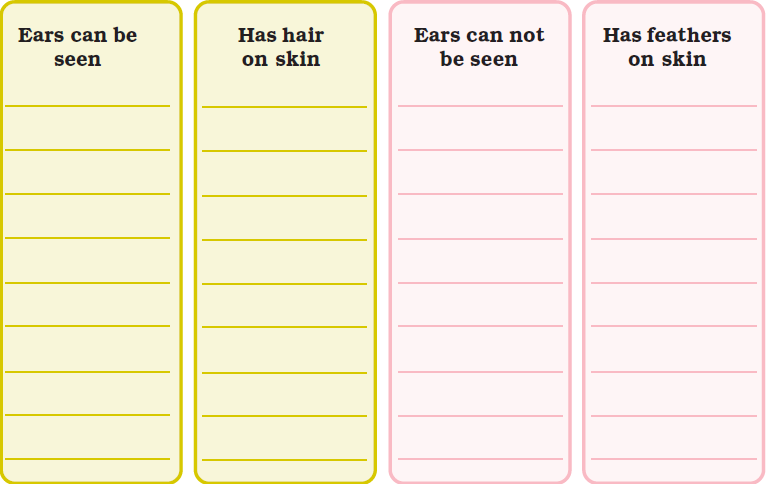 Cow and buffalo were put on lists of animals with hair on their body and whose ears can be seen. From a distance, their hair cannot be seen. After going near one of them, the hair on the skin can be seen.

4. If you were to meet an elephant, would you dare to touch it? Do you know that an elephant also has hair on its skin?

I would not dare to touch an elephant if I were to meet one. Yes, I know that an elephant also has hair on its skin.

1. Have you seen animals around your house or school that have small babies? Write their names in your notebook.

2. Have you ever kept a pet? Does anyone you know keep a pet?

Yes, I have a pet dog. Yes, I know some people who keep a pet.

3. Find out more about the pet.

Yes, it has a name, and it’s called Scooby.

The name was given by my parents and me.

It likes to eat rice, bread, meat and biscuits.

(e) How many times a day is it given food?

We give food thrice a day.

It usually sleeps during the day for about 5 to 6 hours.

(g) Is there any special way to look after this animal? How?

We clean and bathe the dog regularly.

(h) Does it get angry? When? How do you know it is angry?

(i) Does it have hair or feathers on its skin?

It has hair on its skin.

Yes, I can see its ears.

(k) Is it a baby or a young animal, or a full-grown animal?

(l) Will this pet animal lay eggs or give birth to babies?

A dog gives birth to babies.

(m) Does it have young ones? 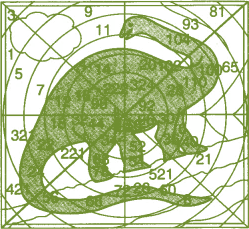 2. Have you seen any animal that looks a little like a dinosaur? Do you know its name?

Yes, I have seen an animal that looks like a dinosaur. It’s called a lizard. 1. Look at this animal. Write its name. Do you know that this is our National Animal?

It’s called a tiger. Yes, I know that the tiger is our national animal.

3. The number of this animal is going down in India. Discuss why this could be happening.

Due to several reasons the numbers of this animal are going down in India. Some of these reasons are
given below:
(i) Hunting – People hunt them down illegally for their bones and skin.
(ii) Deforestation – Because of deforestation, the natural habitat for tigers are getting lost.