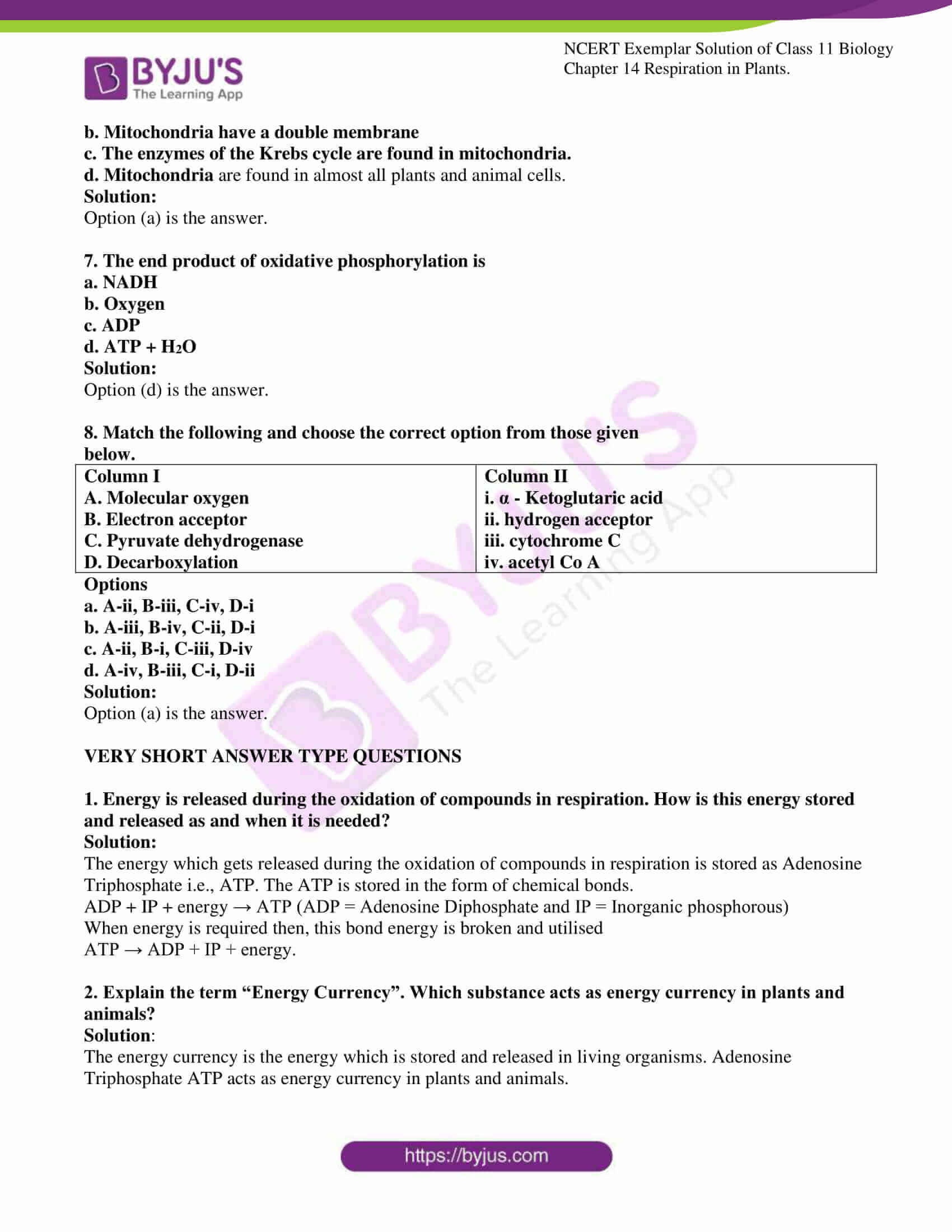 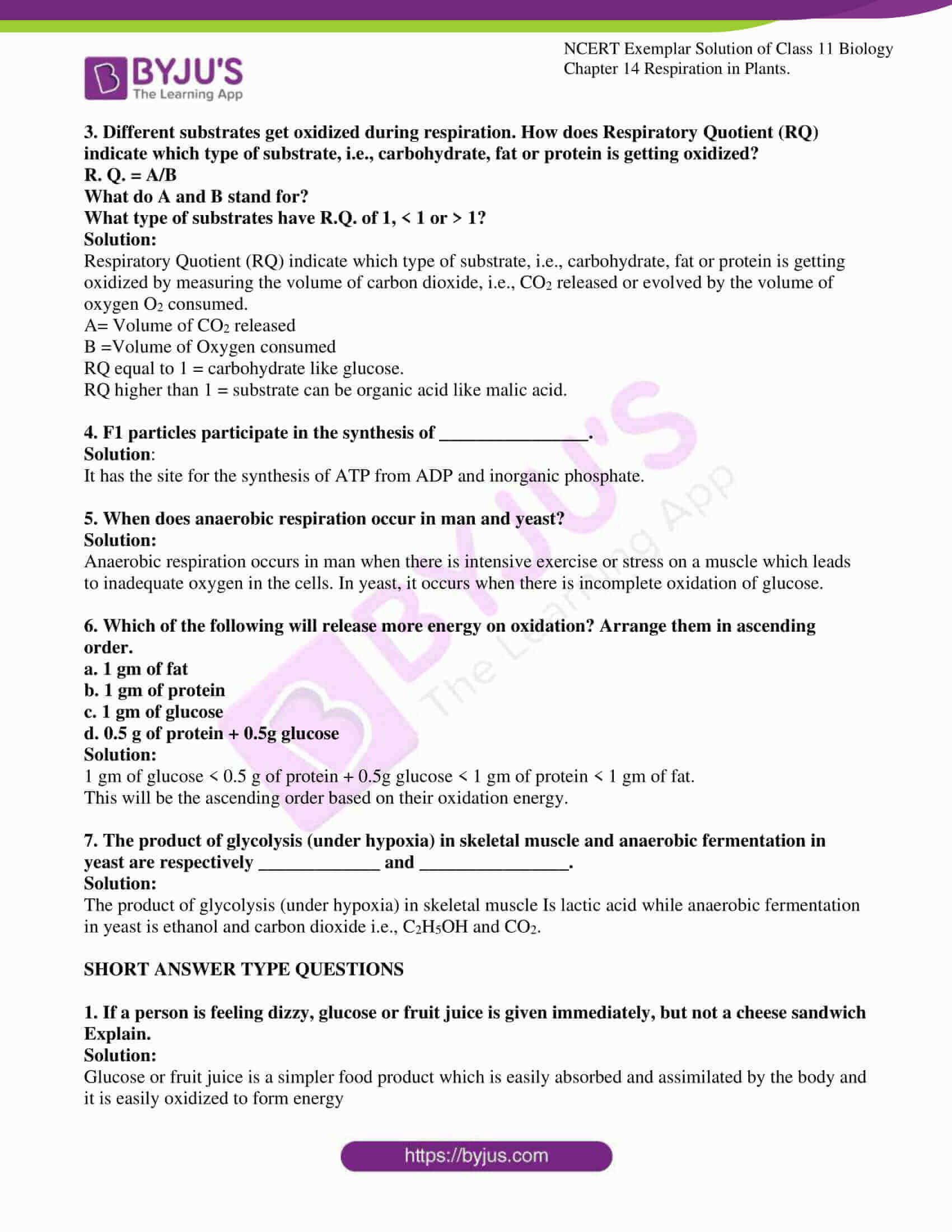 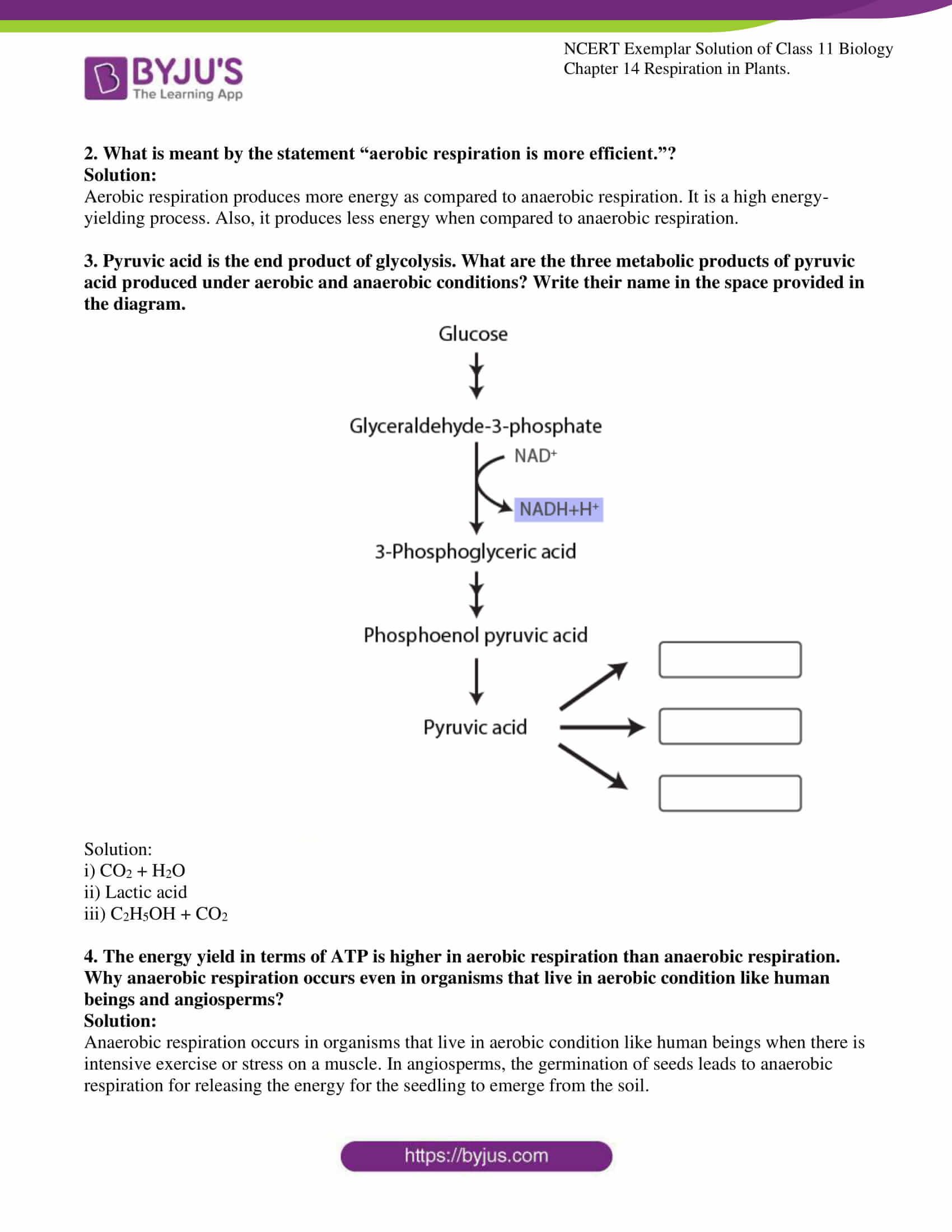 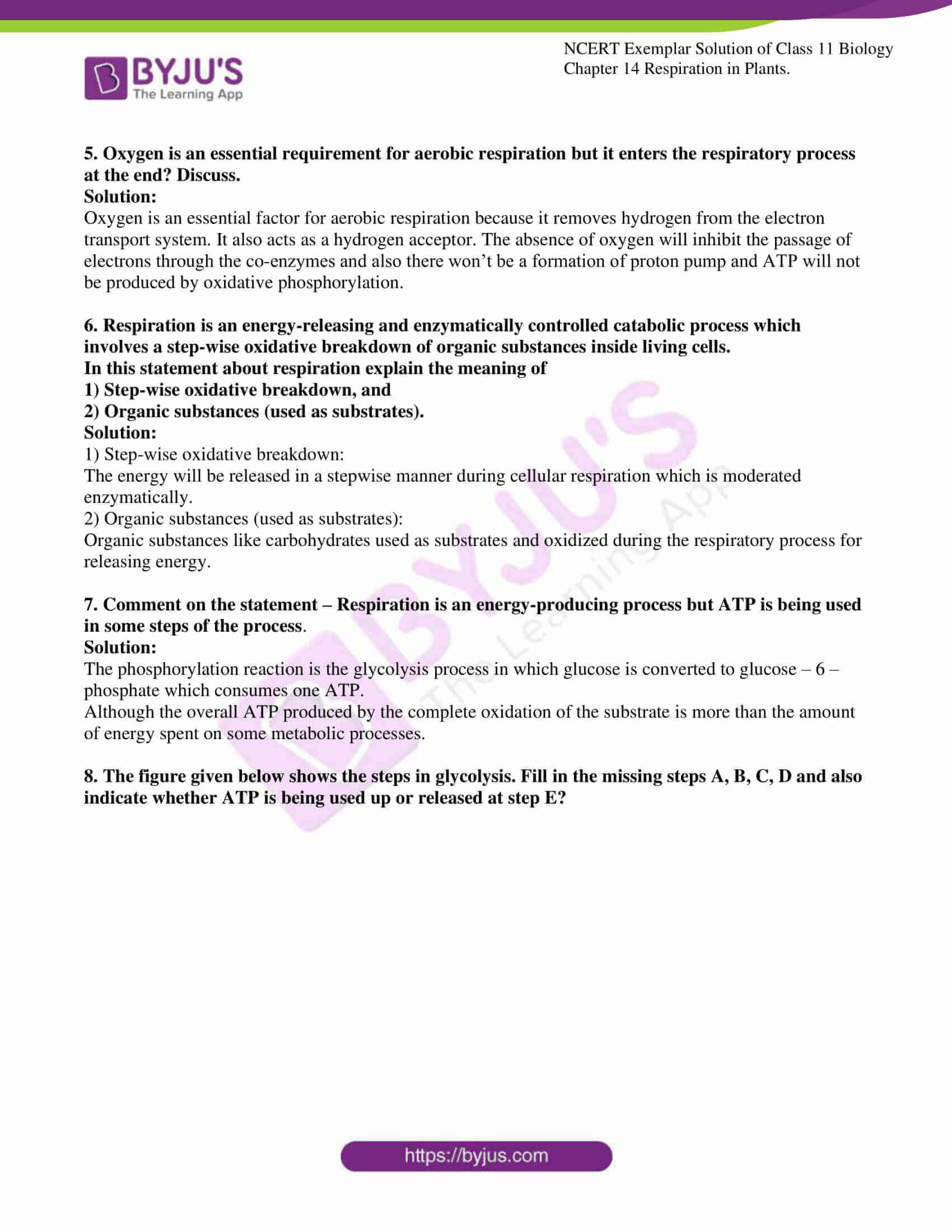 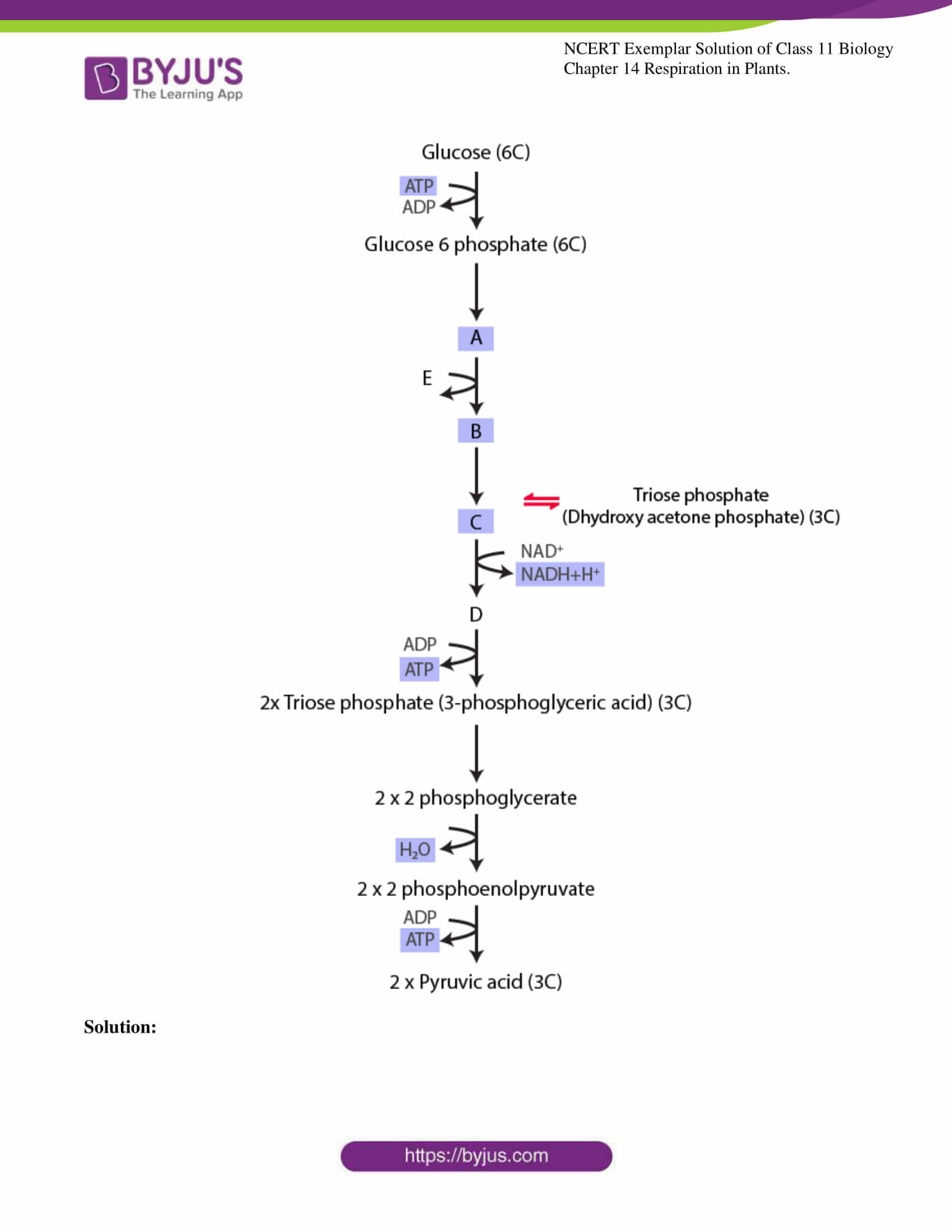 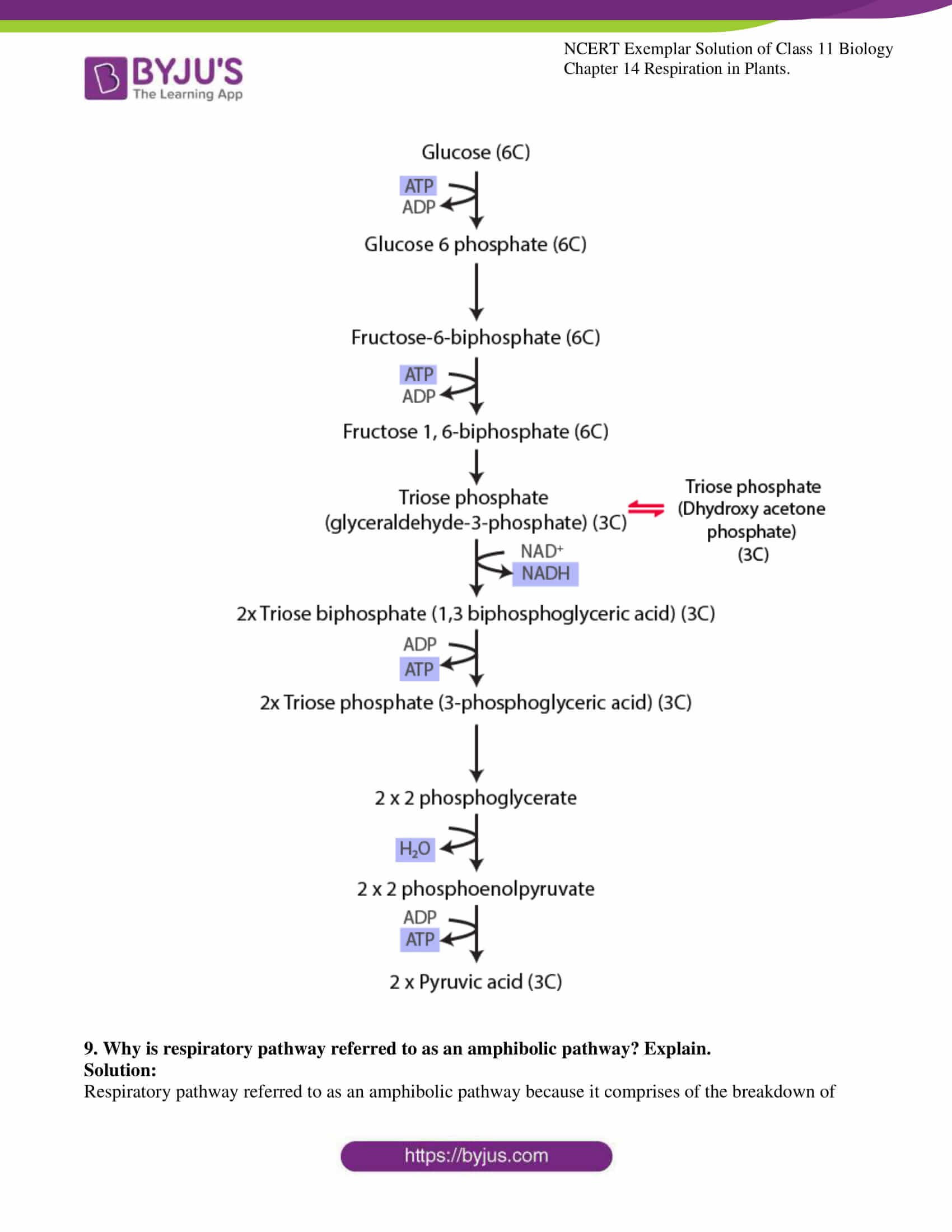 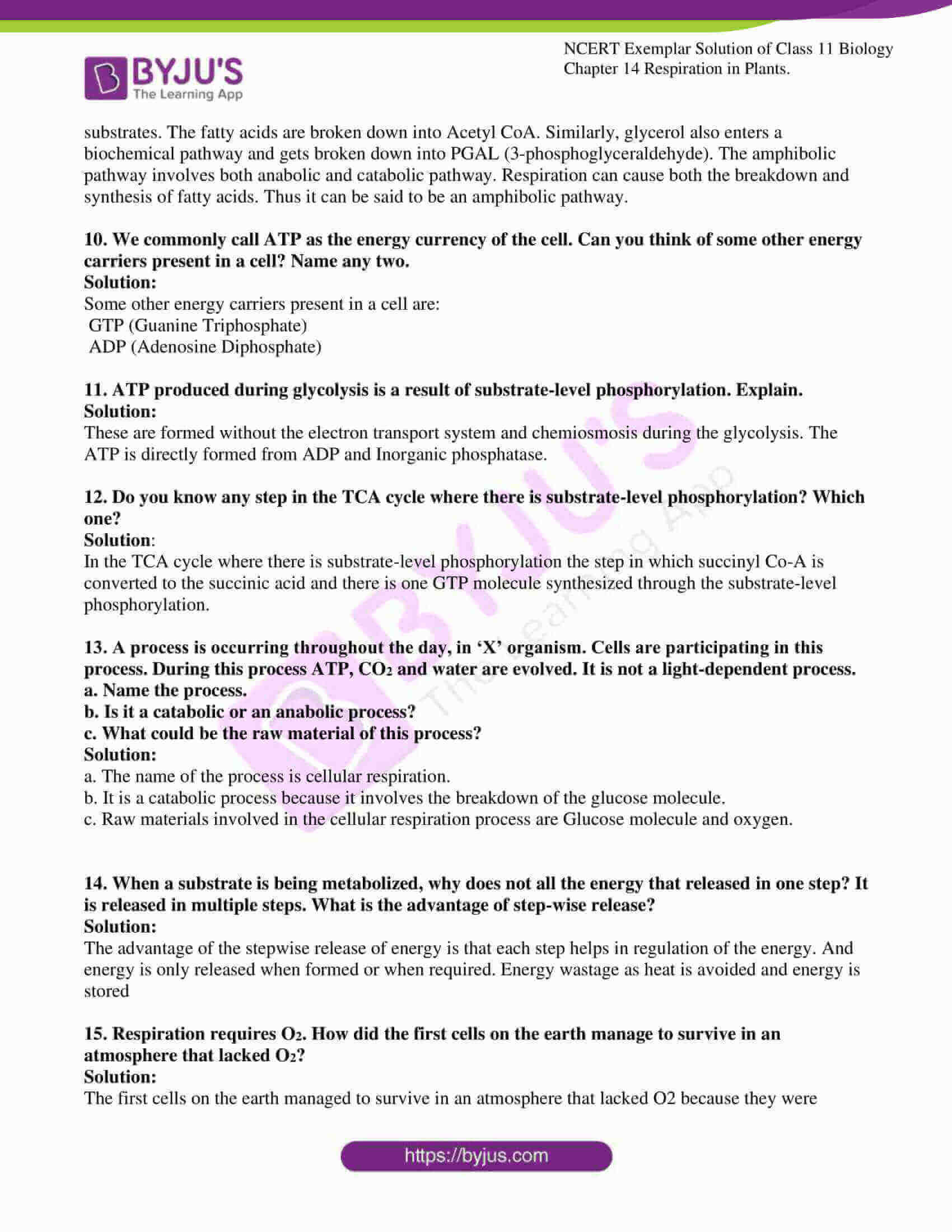 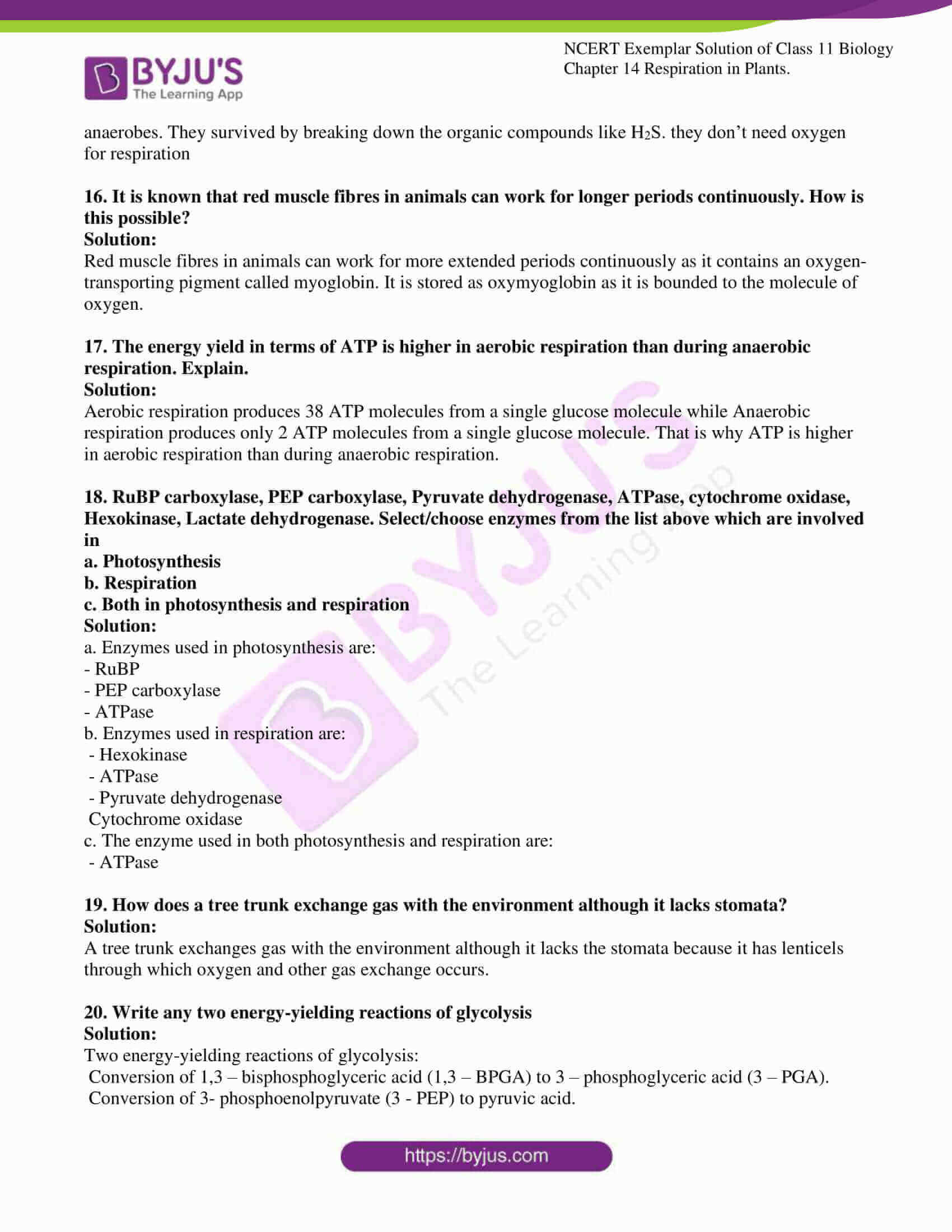 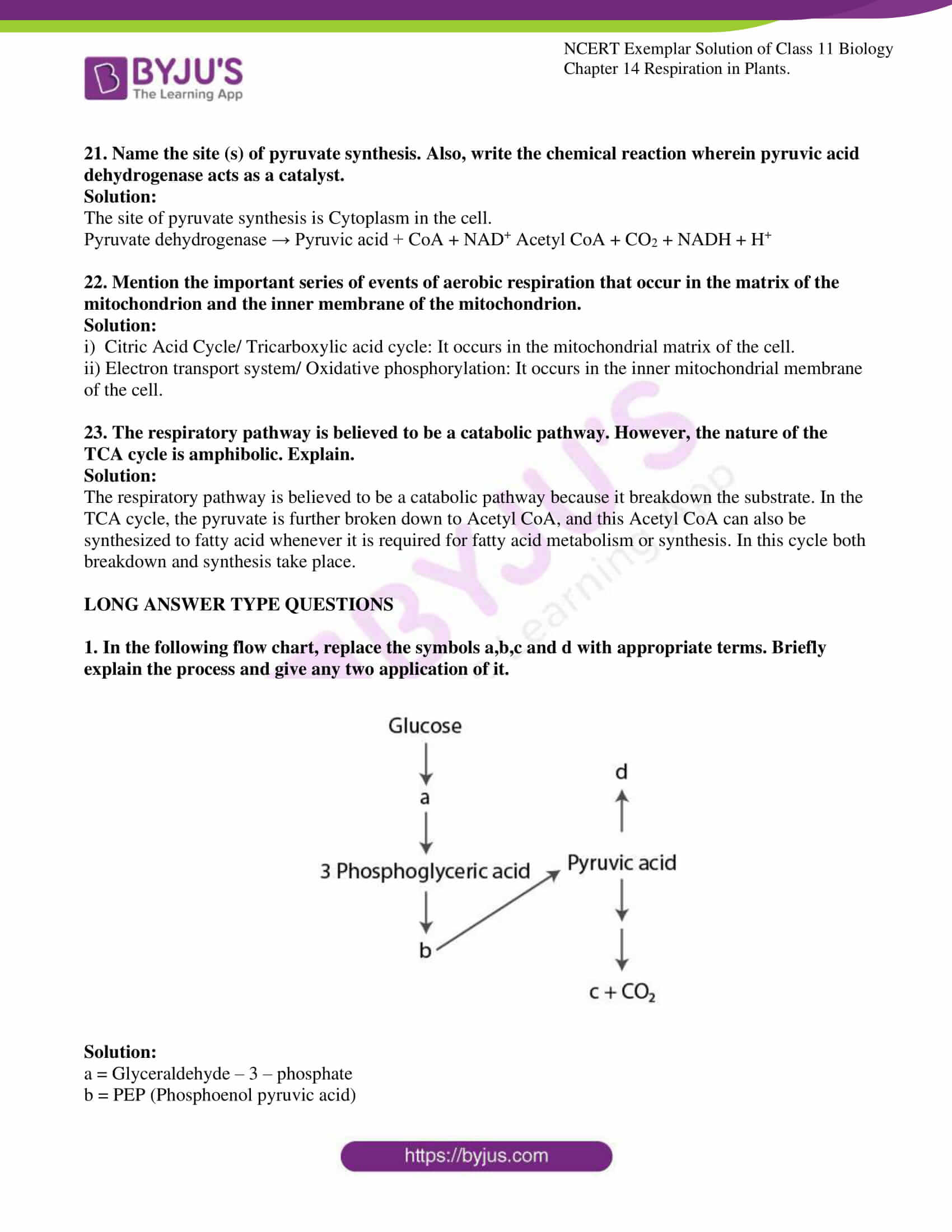 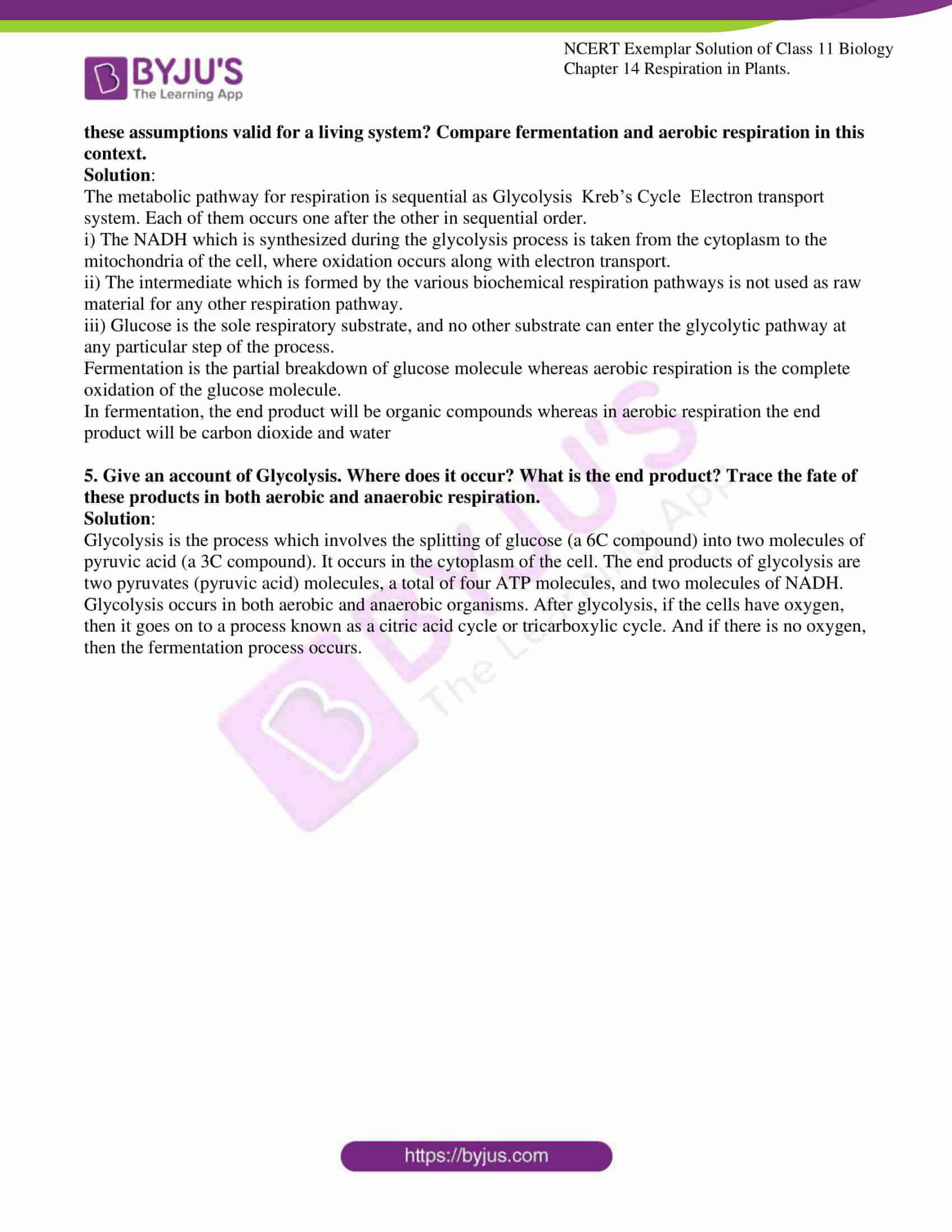 1. The ultimate electron acceptor of respiration in anaerobic organisms is:

2. Phosphorylation of glucose during glycolysis is catalysed by

3. Pyruvic acid, the key product of glycolysis can have many metabolic

fates. Under the aerobic condition, it forms

5. Which of the following exhibits the highest rate of respiration?

6. Mitochondria are called powerhouses of the cell. Which of the following

Do observations support this statement?

b. Mitochondria have a double membrane

c. The enzymes of the Krebs cycle are found in mitochondria.

d. Mitochondria are found in almost all plants and animal cells.

7. The end product of oxidative phosphorylation is

8. Match the following and choose the correct option from those given

1. Energy is released during the oxidation of compounds in respiration. How is this energy stored and released as and when it is needed?

The energy which gets released during the oxidation of compounds in respiration is stored as Adenosine Triphosphate i.e., ATP. The ATP is stored in the form of chemical bonds.

When energy is required then, this bond energy is broken and utilised

2. Explain the term “Energy Currency”. Which substance acts as energy currency in plants and animals?

3. Different substrates get oxidized during respiration. How does Respiratory Quotient (RQ) indicate which type of substrate, i.e., carbohydrate, fat or protein is getting oxidized?

What do A and B stand for?

Respiratory Quotient (RQ) indicate which type of substrate, i.e., carbohydrate, fat or protein is getting oxidized by measuring the volume of carbon dioxide, i.e., CO2 released or evolved by the volume of oxygen O2 consumed.

A= Volume of CO2 released

B =Volume of Oxygen consumed

RQ higher than 1 = substrate can be organic acid like malic acid.

It has the site for the synthesis of ATP from ADP and inorganic phosphate.

5. When does anaerobic respiration occur in man and yeast?

Anaerobic respiration occurs in man when there is intensive exercise or stress on a muscle which leads to inadequate oxygen in the cells. In yeast, it occurs when there is incomplete oxidation of glucose.

6. Which of the following will release more energy on oxidation? Arrange them in ascending order.

This will be the ascending order based on their oxidation energy.

The product of glycolysis (under hypoxia) in skeletal muscle Is lactic acid while anaerobic fermentation in yeast is ethanol and carbon dioxide i.e., C2H5OH and CO2.

1. If a person is feeling dizzy, glucose or fruit juice is given immediately, but not a cheese sandwich Explain.

2. What is meant by the statement “aerobic respiration is more efficient.”?

3. Pyruvic acid is the end product of glycolysis. What are the three metabolic products of pyruvic acid produced under aerobic and anaerobic conditions? Write their name in the space provided in the diagram. 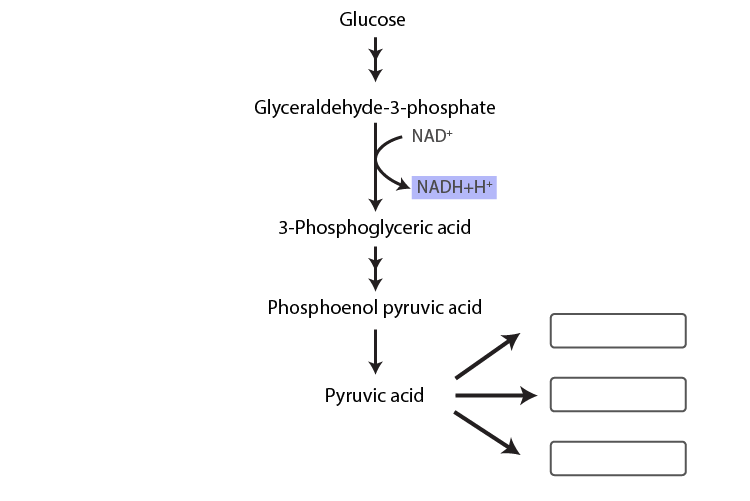 Anaerobic respiration occurs in organisms that live in aerobic condition like human beings when there is intensive exercise or stress on a muscle. In angiosperms, the germination of seeds leads to anaerobic respiration for releasing the energy for the seedling to emerge from the soil.

5. Oxygen is an essential requirement for aerobic respiration but it enters the respiratory process at the end? Discuss.

Oxygen is an essential factor for aerobic respiration because it removes hydrogen from the electron transport system. It also acts as a hydrogen acceptor. The absence of oxygen will inhibit the passage of electrons through the co-enzymes and also there won’t be a formation of proton pump and ATP will not be produced by oxidative phosphorylation.

6. Respiration is an energy-releasing and enzymatically controlled catabolic process which involves a step-wise oxidative breakdown of organic substances inside living cells.

In this statement about respiration explain the meaning of

The energy will be released in a stepwise manner during cellular respiration which is moderated enzymatically.

Organic substances like carbohydrates used as substrates and oxidized during the respiratory process for releasing energy.

7. Comment on the statement – Respiration is an energy-producing process but ATP is being used in some steps of the process.

The phosphorylation reaction is the glycolysis process in which glucose is converted to glucose – 6 – phosphate which consumes one ATP.

Although the overall ATP produced by the complete oxidation of the substrate is more than the amount of energy spent on some metabolic processes.

8. The figure given below shows the steps in glycolysis. Fill in the missing steps A, B, C, D and also indicate whether ATP is being used up or released at step E? 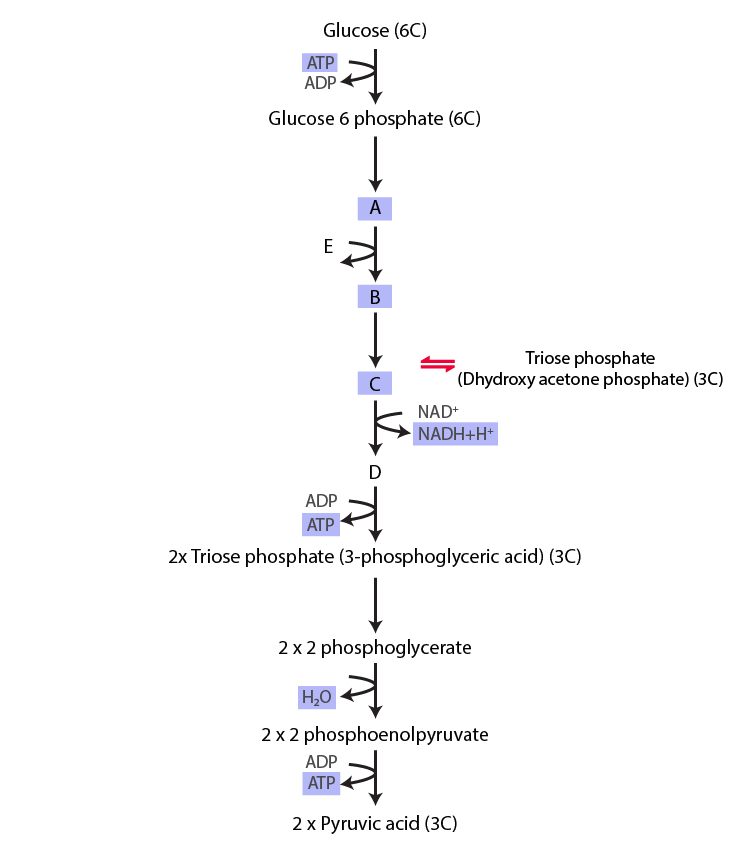 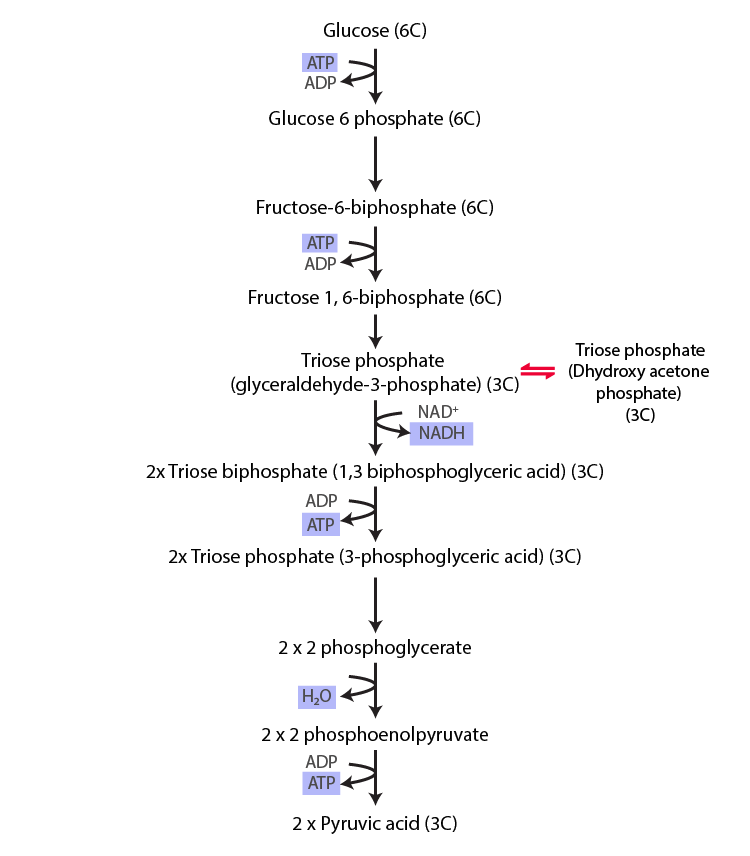 9. Why is respiratory pathway referred to as an amphibolic pathway? Explain.

10. We commonly call ATP as the energy currency of the cell. Can you think of some other energy carriers present in a cell? Name any two.

Some other energy carriers present in a cell are:

11. ATP produced during glycolysis is a result of substrate-level phosphorylation. Explain.

These are formed without the electron transport system and chemiosmosis during the glycolysis. The ATP is directly formed from ADP and Inorganic phosphatase.

12. Do you know any step in the TCA cycle where there is substrate-level phosphorylation? Which one?

13. A process is occurring throughout the day, in ‘X’ organism. Cells are participating in this process. During this process ATP, CO2 and water are evolved. It is not a light-dependent process.

a. Name the process.

b. Is it a catabolic or an anabolic process?

c. What could be the raw material of this process?

a. The name of the process is cellular respiration.

b. It is a catabolic process because it involves the breakdown of the glucose molecule.

14. When a substrate is being metabolized, why does not all the energy that released in one step? It is released in multiple steps. What is the advantage of step-wise release?

The advantage of the stepwise release of energy is that each step helps in regulation of the energy. And energy is only released when formed or when required. Energy wastage as heat is avoided and energy is stored

15. Respiration requires O2. How did the first cells on the earth manage to survive in an atmosphere that lacked O2?

The first cells on the earth managed to survive in an atmosphere that lacked O2 because they were anaerobes. They survived by breaking down the organic compounds like H2S. they don’t need oxygen for respiration

16. It is known that red muscle fibres in animals can work for longer periods continuously. How is this possible?

Red muscle fibres in animals can work for more extended periods continuously as it contains an oxygen-transporting pigment called myoglobin. It is stored as oxymyoglobin as it is bounded to the molecule of oxygen.

c. Both in photosynthesis and respiration

a. Enzymes used in photosynthesis are:

b. Enzymes used in respiration are:

c. The enzyme used in both photosynthesis and respiration are:

19. How does a tree trunk exchange gas with the environment although it lacks stomata?

A tree trunk exchanges gas with the environment although it lacks the stomata because it has lenticels through which oxygen and other gas exchange occurs.

The site of pyruvate synthesis is Cytoplasm in the cell.

i) Citric Acid Cycle/ Tricarboxylic acid cycle: It occurs in the mitochondrial matrix of the cell.

ii) Electron transport system/ Oxidative phosphorylation: It occurs in the inner mitochondrial membrane of the cell.

23. The respiratory pathway is believed to be a catabolic pathway. However, the nature of the TCA cycle is amphibolic. Explain.

The respiratory pathway is believed to be a catabolic pathway because it breakdown the substrate. In the TCA cycle, the pyruvate is further broken down to Acetyl CoA, and this Acetyl CoA can also be synthesized to fatty acid whenever it is required for fatty acid metabolism or synthesis. In this cycle both breakdown and synthesis take place.

1. In the following flow chart, replace the symbols a,b,c and d with appropriate terms. Briefly explain the process and give any two application of it.

i) Fermentation is widely used for the production of alcoholic beverage products like Whisky, Beer, etc.

2. Given below is a diagram showing ATP synthesis during aerobic respiration, replace the symbols A, B, C, D and E by appropriate terms given in the box.

Oxygen plays a crucial role at the end of ETC because it removes the hydrogen from the electron transport system. It acts as a hydrogen acceptor in the electron transport chain. If oxygen is absent then the transportation of electron will not happen through the coenzymes and there will be no formation of proton pump and ATP will not be produced by oxidative phosphorylation.

4. Enumerate the assumptions that we undertake in making the respiratory balance sheet. Are these assumptions valid for a living system? Compare fermentation and aerobic respiration in this context.

The metabolic pathway for respiration is sequential as Glycolysis Kreb’s Cycle Electron transport system. Each of them occurs one after the other in sequential order.

i) The NADH which is synthesized during the glycolysis process is taken from the cytoplasm to the mitochondria of the cell, where oxidation occurs along with electron transport.

iii) Glucose is the sole respiratory substrate, and no other substrate can enter the glycolytic pathway at any particular step of the process.

5. Give an account of Glycolysis. Where does it occur? What is the end product? Trace the fate of these products in both aerobic and anaerobic respiration.

Glycolysis is the process which involves the splitting of glucose (a 6C compound) into two molecules of pyruvic acid (a 3C compound). It occurs in the cytoplasm of the cell. The end products of glycolysis are two pyruvates (pyruvic acid) molecules, a total of four ATP molecules, and two molecules of NADH. Glycolysis occurs in both aerobic and anaerobic organisms. After glycolysis, if the cells have oxygen, then it goes on to a process known as a citric acid cycle or tricarboxylic cycle. And if there is no oxygen, then the fermentation process occurs.

BYJU’S is determined to present you the quality educational material for CBSE students of all the subjects and classes. Our study material help you in planning your preparation and getting well versed with BYJU’S study resources make you pass your exam in flying colours.

NCERT Exemplars provided by us will help you grasp the topic deeply and there make you well equipped to write answers for all kind of possible questions.